This list looks at ten apes (individual apes, not whole species) that exemplify extraordinary mental faculty or physical skills, for which they deserve recognition. Each earns a spot on the list for a unique reason, and examples from all the extant ape groups are featured; including gorillas, chimpanzees, orangutans and gibbons. To review, apes belong to the same classification order (primates) as monkeys, lemurs and marmosets, but are generally distinguished from these by a lack of a tail and/or other traits.

Not surprisingly, most ape populations are currently endangered as a result of habitat loss, and so it is in a spirit of conservation and protection that I offer this top ten. Please enjoy. 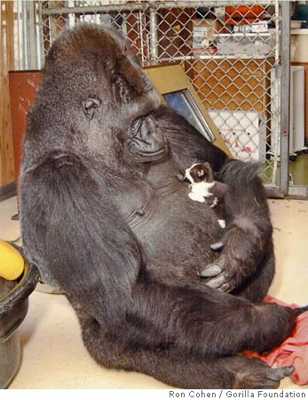 Koko is a female lowland gorilla who was born into captivity in the San Francisco Zoo, in 1971. She is famous for having learned over 1,000 signs in American Sign Language (technically, it’s a slightly modified version of ASL, which her trainer Penny Patterson calls GSL, Gorilla Sign Language). Although almost all the signs she knows are nouns and adjectives, and she is unable to construct sentences, she has demonstrated aptitude by inventing new signs based on her existing vocabulary. For example, she combined the words “water” and “bird” to describe ducks and swans. She also has used the language to communicate emotion, signing “frown,” “cry,” and “sad” when her pet cat was killed by a car. In addition to her prowess in signing, Koko can also understand about 2,000 words in spoken English. While many of the claims about her capacity to communicate have been contended, she is, nonetheless, an impressive specimen and her progress has raised important questions about our gorilla relatives. 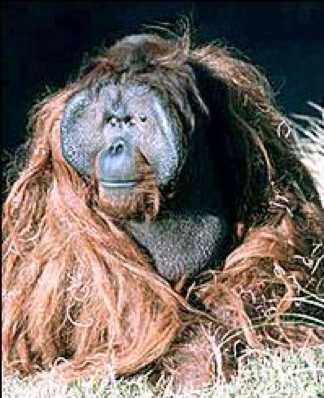 Also known as the “hairy Houdini,” Ken was a male Bornean orangutan born into captivity (also in 1971) in the San Diego Zoo. He achieved celebrity status in the summer of 1985, by outsmarting his keepers and escaping from his enclosure on three separate occasions, and also helping other orangutans escape from the same enclosure.

Zoo personnel were baffled at how the ape managed the feat, resorting to installing hidden cameras (which proved nothing as Ken somehow knew when he was under surveillance) and hiring professional rock-climbers to examine the enclosure inch-by-inch to find every possible exit. Ken spent his short-lived periods of freedom strolling leisurely around the zoo, admiring the animals and behaving congenially with human zoo goers. Eventually, the orangutan home was rendered escape-proof, but not before this esc-ape artist had captured the hearts of the public, inspiring at least one known song, a work of short fiction, and various t-shirts and bumper stickers. In the year 2000, Ken was diagnosed with cancer and euthanized. 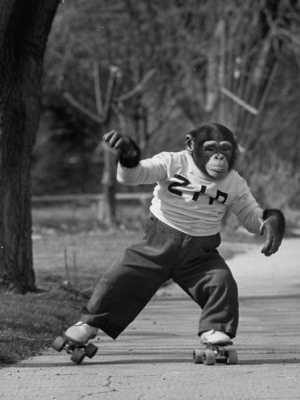 Zippy was a chimpanzee actor and regular feature on the Ed Sullivan Show, the Howdy Doody Show and other American comedy television shows in the 1950’s and 60’s. He entertained audiences with his bike riding, roller-skating and genuinely handsome smile. Indeed, Zippy was so popular that a line of stuffed dolls were produced in his likeness and, today, these toys are among the most cherished vintage items. Other chimpanzee actors meriting a brief mention are Jiggs, the first “Cheeta” from the 1930’s Tarzan movies, Evie from Battlestar Galactica, Punkun from the Japanese show Tensai Shumira Zoo, and Mikey from the Manchurian Candidate, Saturday Night Live and the World Series of Poker. 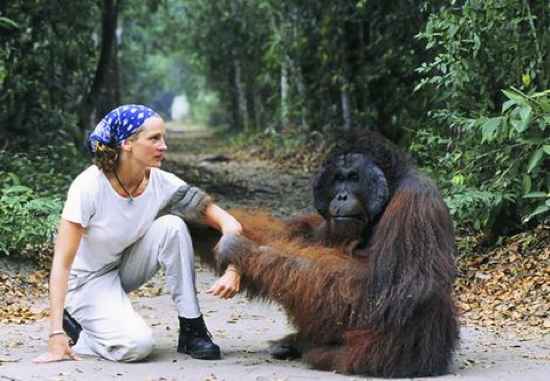 In 1996, while filming a wildlife documentary in the remote jungles of Borneo, actress Julia Roberts was overpowered by a 300-pound (130 k) male orangutan, who was, apparently, intent on mating. Forced copulation is quite common in orangutan societies and it accounts for a large part of their reproduction. Exploits of orangutans upon human women are also well documented, however referring to these occurrences as acts of rape is somewhat incorrect, as it would ascribe criminal motives to a blameless animal. In any event, Julia was removed from the orangutan’s grasp with the help of five crew hands who were present, and she escaped the incident unscathed. In her own words, “He wanted to play as though I was a doll, or carry me off and have a smooch. It got a bit out of hand, but I knew his intentions were playful, and so I think that he paid me a compliment. He had the strength of an entire person’s body in one finger. He could have crushed me.” There’s also video footage of this encounter.

Where there’s no harm, there’s no foul, and so despite an unsuccessful try, this nameless ape earns his spot on our list for simply setting his hopes high. 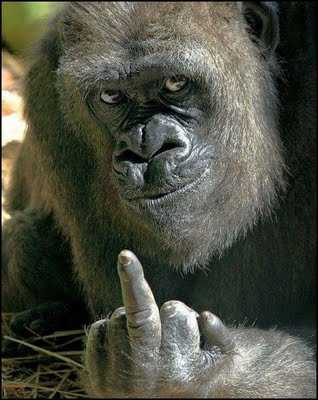 Tião was a chimpanzee from the Rio de Janeiro Zoo, who was a candidate for the office of mayor in Rio de Janeiro, in 1988. Representing the “Brazilian Banana Party,” the event was a farce perpetrated by the comedy duo Casseta & Planeta, who gave the campaign the slogan “Vote Monkey, Get Monkey.” The chimp, who also gained notoriety for throwing feces at various politicians at the zoo, ultimately received over 400,000 of the votes, or about 9.5%. All of these were officially recorded as “null” but it was enough for him to finish in a respectable third place. 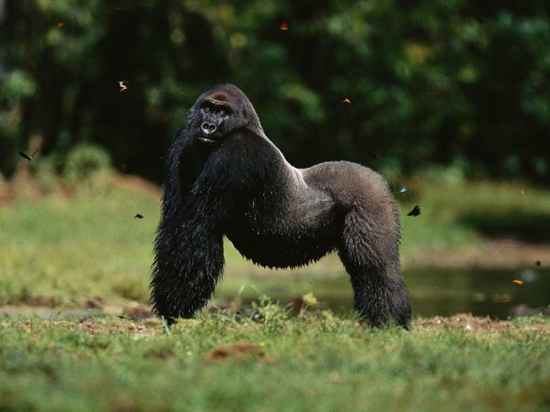 Michael was an orphan silverback gorilla from Cameroon who, as a baby in the wild, survived the violent poaching of his mother. After this he was brought to California, where he learned sign language at the Gorilla Foundation under the tutelage of Koko. Experts believe Michael witnessed the attack on his mother, and used signs to describe the traumatic event.

At the Foundation, Michael also learned how to paint and his works have been deemed “impressionist” (as opposed to the abstract works of other gorilla artists, including Koko). He always picked his own colors, and he often made a handprint on the canvas, as a signature. One of his most distinguished pieces is a portrait he painted from memory of his pet dog, a border collie whom he named Apple. Michael died of heart failure in the year 2000, and his works are currently available for purchase online. 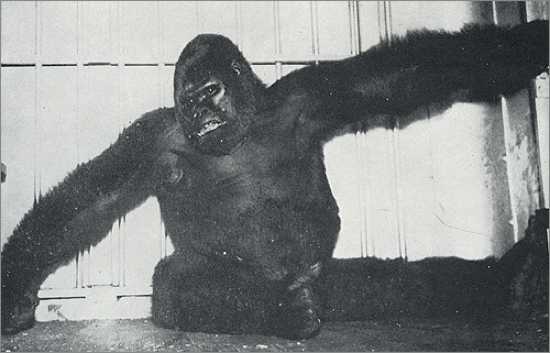 Buddy was a larger-than-average Congolese lowland gorilla who joined the Ringling Bros. and Barnum & Bailey Circus in the 1930’s. Renamed Gargantua and advertised as “The Largest and Fiercest Gorilla Ever Brought Before the Eyes of Civilized Man,” this capable ape is credited with single-handedly saving the iconic circus company from financial ruin during the Great Depression.

Most remarkable about Buddy is the fact that he overcame two brushes with death in his captive childhood. The first event occurred was when he was living in the custody of a sea captain, and a sailor cruelly splashed nitric acid in his face, permanently scaring him physically and emotionally. This trauma caused a lifelong pattern of intense aggression towards humans, adding to his imposing Gargantua persona. The second hardship was a bout of Double Pneumonia from which Buddy suffered greatly, but recovered with the help of a fringe ape veterinarian named Gertrude Lintz, who also helped repair his damaged face.

Buddy’s size was indeed a marvel, and his skeleton now resides with the Peabody Museum of Natural History at Yale University. 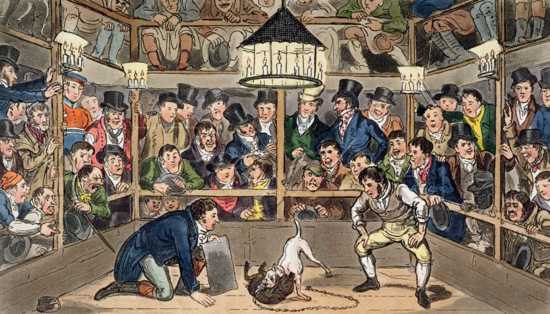 Jacco Macacco was a blood-sport champion who competed in the 1820’s at the Westminster Pit dog-fighting arena, in London. During his prestigious career, Jacco wowed spectators with his unique throat-slitting style, defeating some of the most touted dogs in epic struggles (several upwards of twice his weight), and became the subject of many celebratory drawings and paintings.

It should be noted that Jacco’s exact species is unknown, and although the moniker Macacco [sic] is Portuguese for “monkey” and his vocation was categorically “monkey-baiting,” given the detailed descriptions of him most believe he belonged the Siamang gibbon group of apes of Southwest Asia.

Jacco’s heyday was at the height of animal-baiting popularity, an attraction that soon after dissipated and was legally banned by parliament’s Cruelty to Animals Act, of 1835. 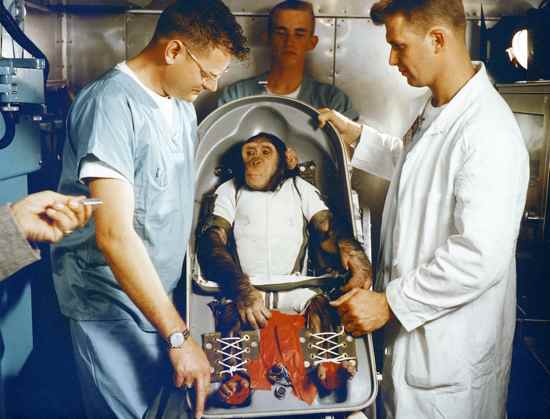 Ham was a chimpanzee astronaut who was launched into Earth’s outer orbit on January 31, 1961, from Cape Canaveral, Florida. His historic mission, part of the American Mercury Project, lasted roughly 17 minutes before splashing down in the Atlantic Ocean.

Calling him a “space explorer” might be a stretch, but he certainly qualifies as a pioneer, comparable to the goat, duck and chicken that went up in Montgolfier’s hot air balloon in Paris, in 1783.

NASA was hesitant to name their chimpanzee too early, for fear that bad PR that might ensue with his death (had the experiment failed), and so prior to his safe return he was known solely as #65. Although an important milestone among apes (he preceded Alan Shepard’s Freedom 7 ascent by three months) his entry into the final frontier was not the first by an animal; that distinction belonging to a dog named Laika, who was launched by Soviet Russia, in 1957. 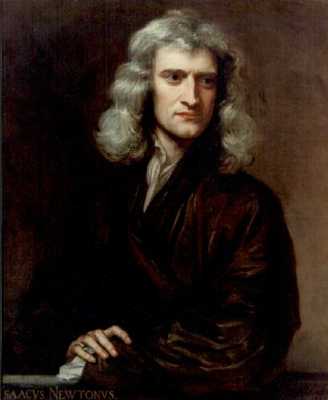 Sir Isaac Newton was a Homo sapiens born in England in 1643, who ranks among the world’s most renowned figures in science (or “natural philosophy” as it was called during his lifetime), physics and astronomy. His works include, most famously, his eponymous law of universal gravitation and his eponymous three laws of motion, which, when published in his 1687 masterpiece Principia, provided humankind with an understanding of the physical universe for centuries, and which continue to be the foundational standards for all modern mechanics and engineering. Newton also made advancements in the fields of light and color theory, sound and of powers and roots in mathematics.

It would be nigh impossible to overstate his contribution to civilization as he is often regarded as having one of the greatest impacts of any genius in history (together with Albert Einstein.) An inscription on his monument tomb reads as follows (Latin translated to English):

“Here is buried Isaac Newton, Knight, who by a strength of mind almost divine, and mathematical principles peculiarly his own, explored the course and figures of the planets, the paths of comets, the tides of the sea, the dissimilarities in rays of light, and, what no other scholar has previously imagined, the properties of the colors thus produced. Diligent, sagacious, and faithful, in his expositions of nature, antiquity and the holy scriptures, he vindicated by his philosophy the majesty of God mighty and good, and expressed the simplicity of the gospel in his manners. Mortals rejoice that there has existed such and so great an ornament of the human race.” 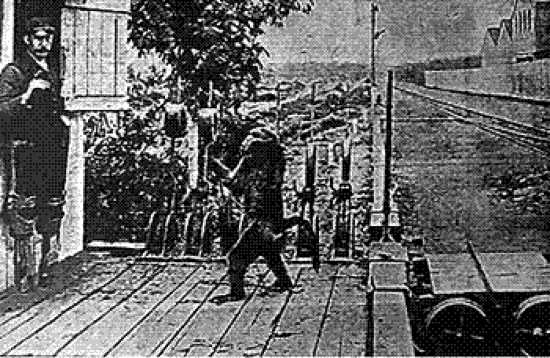 Disqualified as a non-ape, Jack was a capable baboon from South Africa, who worked as the personal assistant to a Cape railroad employee named Jumper Wide, who had lost both his legs in a train accident. Working at the station, Jack initially helped with the day-to-day mobility of the crippled Wide, but was subsequently trained by Wide to operate the trains’ switches, essentially to perform all of the duties of a hired, human signalman.

Understandably, many arriving at the station were amazed to see a baboon at the controls, and one woman fainted at the sight. The situation was investigated by the governmental authority, and Jack proved to be extremely proficient and reliable at his post, and was allowed to keep the job. He was even given an employee number and compensation.

The story of Jumper Wide and Jack is a tender tale of human-animal friendship, and Wide was deeply grief-stricken when Jack succumbed to tuberculosis and died, in 1890. Jack’s skull remains on display at the Albany Museum at Rhodes University near Port Elizabeth.