During the late 1970s video games became sophisticated enough to offer good-quality sound and graphics, though they were still very basic. As a result, companies had to rely on simple and fun gameplay in their arcade games to become popular. This emphasis on the gameplay is why many arcade games continue to be enjoyed today despite their technology being vastly outdated by modern computing technology. I included links for entries where I could find them, so you can play some of the games for yourself. 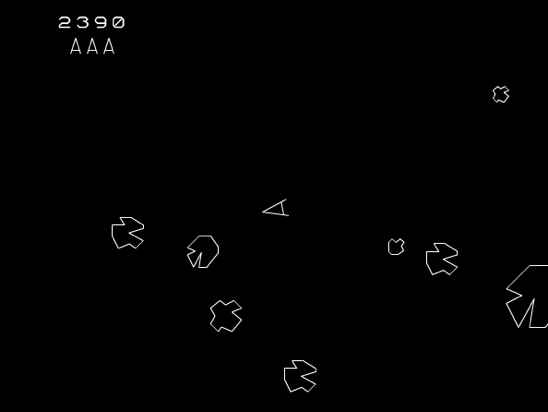 Asteroids was released in 1979 by Atari. It was immensely successful and soon became one of the most played games of the 1980s. The game was so popular that video arcade operators sometimes had to install larger boxes to hold the number of coins that were spent by players. Due to Asteroid’s success, a sequel was introduced by Atari, in 1980, named Asteroids Deluxe.

In the game itself, the player controls a triangular space ship flying in an asteroid field, the objective being to avoid contact with asteroids whilst also destroying them to gain points. Occasionally, alien space ships will traverse the player, usually posing more of a threat than a regular asteroid. These can be destroyed for bonus points. [Play Here] 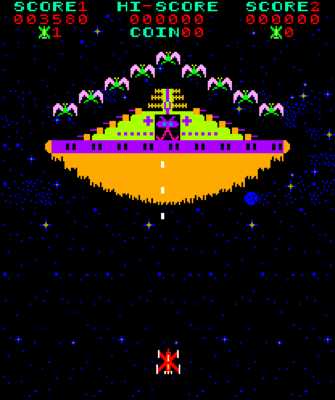 Pheonix was developed by Armstar Electronics and released by Centuri, in 1980. Upon release Pheonix became well-renowned because of it’s full color graphics, a seemingly new feature at the time. The most notable aspect of Pheonix is that it has one of the earliest examples of a “boss” battle, within a video game. During the boss battle, the player fights the “mothership”, which is visible in the image above.

Like many other arcade games of the era, Pheonix features an outer-space theme. The player controls a space ship that may move horizontally, but not vertically. The objective is to destroy enemy space ships that appear similar to birds, whilst avoiding opposing fire. After facing numerous waves of enemies the player is confronted by the “mothership”, which is difficult to destroy but yields significantly more points. [Play Here] 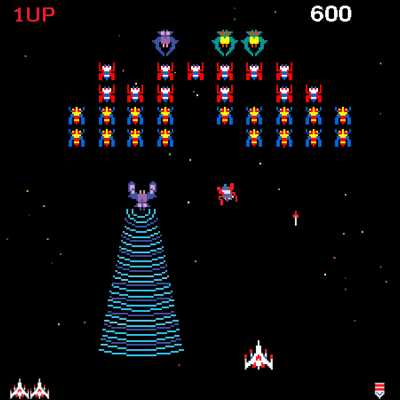 Galaga was created and published by Namco, in 1981. It proved to be extremely successful; five sequels were developed by Namco in the following years. The latest sequel is “Galaga Legions”, released to the Xbox Live Arcade, in 2011.

In the typical game of Galaga, the player must destroy insect-like aliens to earn points, whilst avoiding fire and contact with enemies. The aliens swarm in formation whilst firing and may fly towards the player if not destroyed fast enough. Different colored aliens represent the enemy rank. Green aliens are typically the most deadly, with blue being the least dangerous. [Play Here] 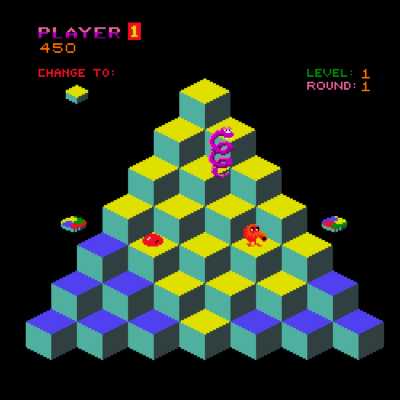 Q*Bert is a platform game ,published in 1982, by Gottlieb. It was well received in arcades and by critics, who praised the graphics, unique gameplay and main character. The success resulted in sequels and use of the character’s likeness in merchandising, such as appearances on lunch boxes, toys and an animated television show.

The object of the game is to light up all horizontal squares on a pyramid, by having the protagonist jump onto each one individually. The player can only jump diagonally, and must also avoid obstacles such as red balls that fall onto the pyramid from a height. Jumping off the pyramid also results in the player losing a life. Upon death the main character emits a sound likened to swearing. [Play Here] 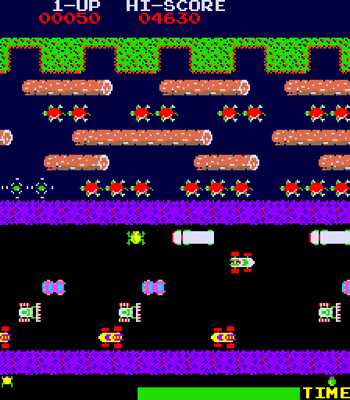 Frogger was first introduced to arcades in 1981. It was developed by Konami and licensed by Sega. The game was originally going to be named: “Highway Crossing Frog”, but developers didn’t feel this captured the true nature of the game, so it was changed to simply Frogger. Because of it’s worldwide popularity, Frogger has ensured it’s immortality in popular culture; appearing in animated television shows and even song lyrics.

The object of the game is to direct frogs to their homes one by one. To do this, each frog must avoid cars while crossing a busy road and navigate a river without falling in water. Skillful players may obtain some bonuses along the way. Once a player successful returns five frogs to their homes, they will advance to the next stage. [Play Here] 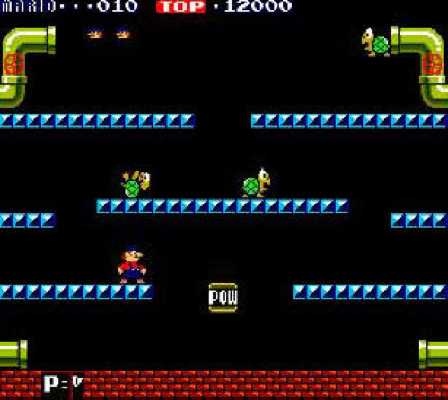 Nintendo released Mario Bros. worldwide, in 1983. Surprisingly, the game was only modestly successful in Japan and wasn’t well-received by critics. However, Mario Bros set the foundation for Nintendo’s future successful video games. The character of Luigi was introduced for the first time, as well as several recurring enemies in the Mario franchise. Mario was also portrayed as a plumber for the first time, with the game taking place within a network of giant pipes.

The player controls either Mario or Luigi, as they investigate the sewers of New York after strange creatures have been appearing down there. The objective of the game is to defeat all of the enemies in each phase. The mechanics of Mario Bros. involve only running and jumping. The player must jump on top of an enemy to flip it, and then finish off the adversary by running into it and performing an automatic kick. 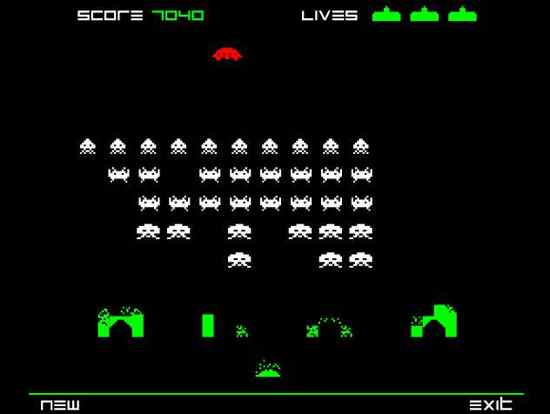 Space Invaders was manufactured and sold by Taito in Japan, in 1978. The game is considered a forerunner in modern video gaming, and it helped to define the popular space shooter theme of arcade games. Following its release, the game caused a temporary shortage of 100-yen coins in Japan and grossed over $500million for Taito in its first three years. The pixelated enemy alien is commonly used as a symbol of video gaming as a whole.

The player controls a turret by moving it horizontally across the bottom of the screen and firing at descending aliens. The aim is to defeat five rows of eleven aliens that move horizontally back and forth across the screen as they advance towards the bottom of the screen. The player defeats an alien, and earns points by shooting it with the turret. As more aliens are defeated, the aliens’ movement and the game’s music both speed up. Defeating the aliens brings another wave that is more difficult, a loop which can continue indefinitely. [Play Here] 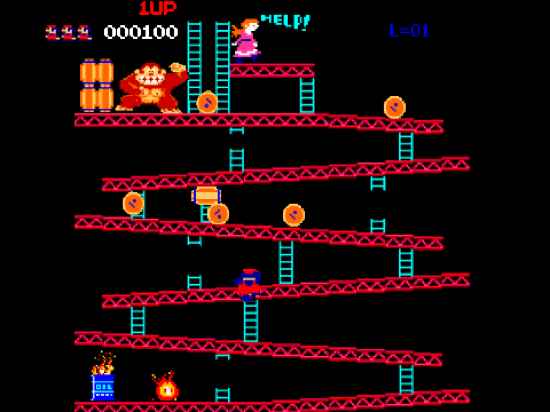 Donkey Kong was released by Nintendo, in 1981. After being initially unsuccessful in Japan, the game took North America by storm and became one of the most influential video games ever. Donkey Kong was allegedly the first game ever to utilize “cut-scenes” to advance a game’s narrative. Ultimately, the success of Donkey Kong helped position Nintendo to dominate the video game market in the 1980s and early 1990s.

The player controls the character; “jump-man”, and attempts to rescue a young woman from the clutches of a barbaric ape. Jump-man must battle through multiple stages consisting of girders and ladders, whilst avoiding barrels and other hazards. When the player reaches the top of the screen and makes contact with the captured female, the game advances to the next stage. After three stages the player must defeat Donkey Kong to rescue the woman. [Play Here] 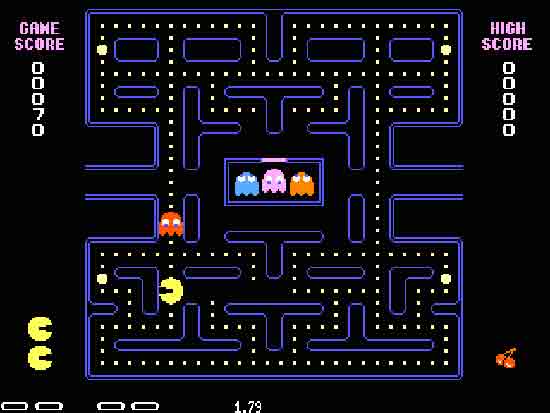 Pac-man was originally created by Namco and first released in Japan, in 1980. It has remained extremely popular from it’s release to the present day, and has become virtually synonymous with video games in general. Pac Man is also an icon in 1980’s popular culture; the likeness of the main character is often shown on lunch boxes and in animated television. At a time when most arcade games where space shooters, Pac-man created a whole new genre of video game. Pac-man is also the highest grossing video game of all time.

The object of the game is to consume every single “pac-dot” visible in a maze. When every dot has been consumed by the protagonist, the game proceeds to the next stage. The player is constantly being chased by four enemies resembling ghosts. If the player makes contact with a ghost, a life is lost. When the player consumes a larger pac-dot, the ghosts turn blue and slow down their movements for a short while. During this period it is possible for Pac-man to eat the ghosts for bonus points. [Play Here] 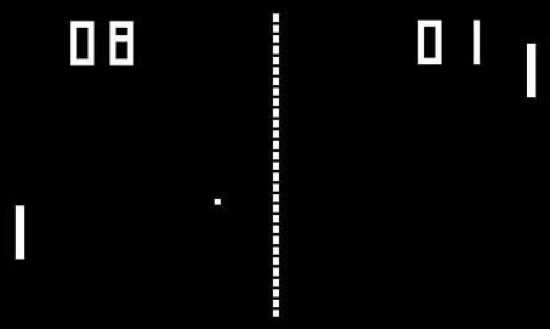 Pong is a tennis sports game and one of the earliest examples of an arcade video game. It is certainly the first ever arcade game to achieve mainstream popularity. It was manufactured by Atari, who released it in 1972. After noticing Pong’s commercial success, several companies began to produce their own games, which mimicked the style and gameplay of Pong. The competition to create a more enjoyable game led to the birth of the video game industry. If it wasn’t for Pong, great games like Space Invaders and Pac-man wouldn’t exist at all.

The game itself is remarkably simple. The player controls an in-game paddle by moving it vertically across the left side of the screen, and can compete against either a computer controlled opponent or another player controlling a second paddle on the opposing side. Players use the paddles to hit a ball back and forth. The aim is for a player to earn more points than the opponent; points are earned when one fails to return the ball to the other side of the court. [Play Here]