Whether you are religious or not, it must be accepted that religion has been with us for a very long time. Some of the most monumental structures ever made have had religious functions. Today it is still possible to be moved by the ruins of these sites, even though the people who made them, and sometimes the gods they were raised to, have disappeared. Here I present ten of the most important ancient religious sites. Pop in the comments any you think I should have included. 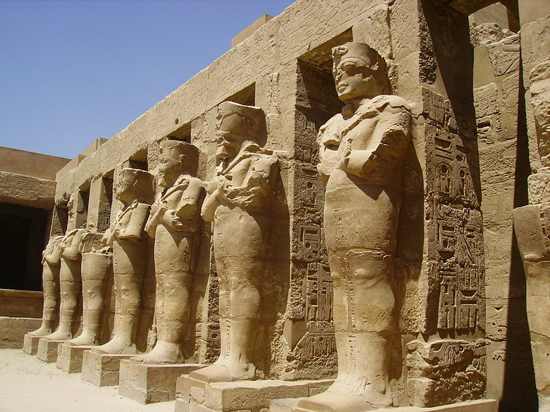 Begun in the 14th century BC, by the pharaoh Ramses II, the temples of Karnak are some of the most famous in the world. Tourists flock to Luxor in their millions. Sitting next to the Nile, Karnak forms one of the largest religious sites in the world. It is packed with stone carved temples and sanctuaries. The great temple of Amun-Re, alone, is worth the effort of visiting, but requires more than a single day to fully appreciate. The friezes, obelisks and forests of pillars will be familiar to you even if you have never been there. Hollywood is fascinated by all things Egyptian, so watch out for Karnak in the background of Transformers: Revenge of the fallen. 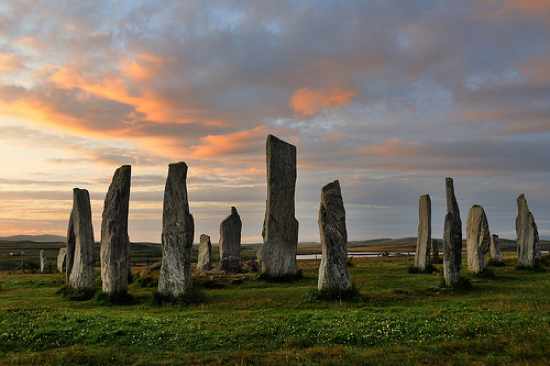 The Callanish stones on the Isle of Lewis date from roughly 2900-2600BC, around the same time stones were being brought to Stonehenge. Legend says that the pale stones are the remains of the Giants who refused to convert to Christianity, Saint Kieran turning them to stone in punishment. I include the Callanish stones rather than the more famous Stonehenge for several reasons. Stonehenge is easier to visit but gives a far less satisfying experience. You can walk amongst the Callanish stones, touch them, and feel much like the original worshipers would have. At Stonehenge you are bombarded by the noise of two major roads. While on the Isle of Lewis you can see the hundreds of other standing stones which litter the fields and hillsides, so it’s well worth a visit.

Editors Note: As a child in the seventies in England, Stonehenge was a fascinating place. With far fewer cars than today, and the ability to still walk among the stones themselves, it was a place of wonder even for a young child. It’s a shame it’s been so diminished by time and ‘progress’.

8
The Ziggurat of Ur
Iraq 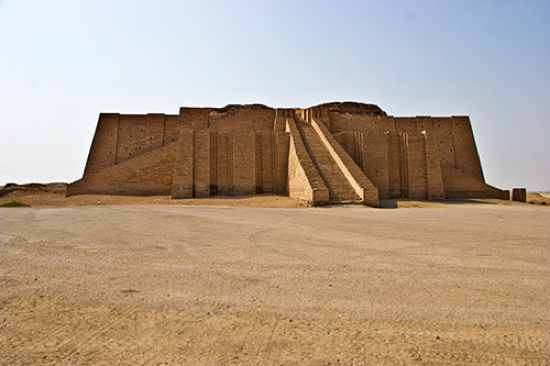 The epic of Gilgamesh is the oldest written story we possess. In this epic, composed in at least the second millennium BC, Gilgamesh, King of Uruk, boasts of the mighty temples he has constructed. Those temples must have resembled the Great Ziggurat of Ur. The ziggurat, first built in the early Bronze age and reconstructed several times since, is a massive step pyramid built to honor the god Nanna. The structure visible today was heavily repaired by Saddam Hussein and sustained minor damage in the first Gulf war. Few people will get to visit the site but it must surely be one of the greatest wonders of the ancient world still visible. 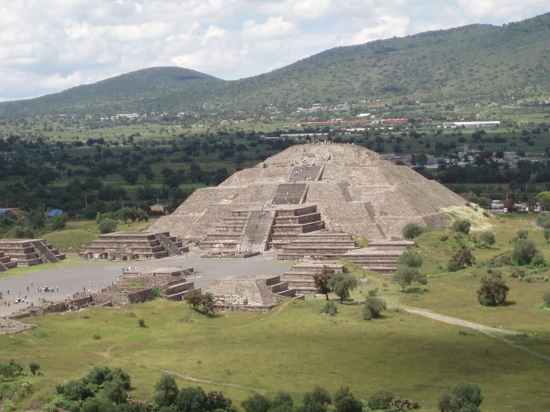 Once one of the great cities of the world, Teotihuacan’s origins remain hotly debated. There is no agreement as to which people built the city, though it is known to have reached its zenith around 450AD. Whoever built it, Teotihuacan is one of the most recognizable sites in the New World. Two great pyramids, those of the Sun and Moon, dominate the city. The pyramids were famously used for human and animal sacrifice, probably in the dedication of new buildings in the city. A broad Avenue of the Dead runs from the pyramid of the Moon, passed that of the Sun, and down towards the temple of Quetzalcoatl. Walking along this road it is easy to imagine the great religious festivals that must have occurred there. 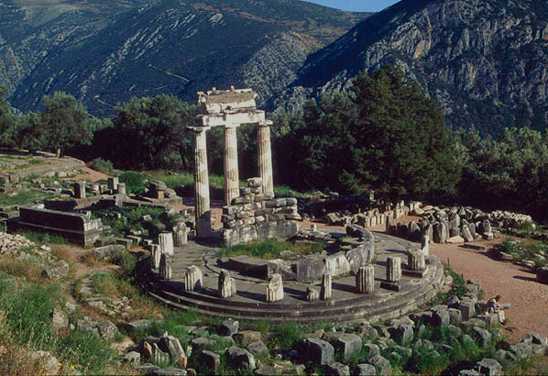 While not as magnificent as Teotihuacan, Delphi has had a profound effect on the Western world. It was the center of the cult of Apollo, and respected by all the Greek city states as sacred. The temple complex, now ruined, lies on the slopes of Mount Parnassus, home of the Muses. The ruins of the temples, stadium, and shrines of Delphi still speak to an important gathering place. No important matter of state could be settled without seeking the advice of the Oracle at Delphi. The Oracle, a woman priestess known as the Pythia, would sit above a crack in the rock under the temple and inhale the divine vapors (volcanic gases). While in a trance caused by the gases she would utter nonsense-words, the speech of the Apollo, and these would be interpreted by priests. Those hoping for such a divine experience today are out of luck, no gases are emitted under the temple any more. This probably is what caused worship at the site to fail. 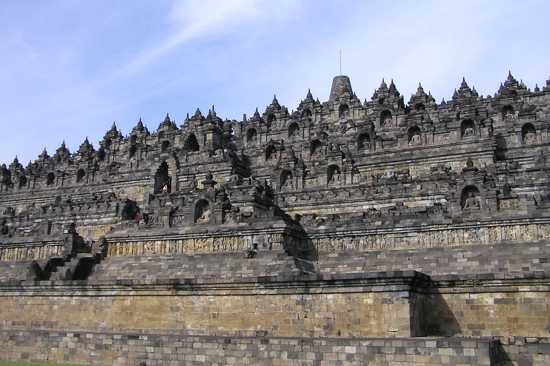 Borobudur is an 8th century Buddhist structure, lost in the jungle until rediscovered in the 19th century. The structure is composed of two million cubic feet of stone set in six square platforms. Each platform is decorated with carved friezes. Five hundred statues of the Buddha are set in niches for worshipers to pray before. The six levels form a path that must be followed to reach the very top. The path is not easy and one must cover a distance of two miles. As you progress along the path the friezes display images of the law of Karma and the life story of the Buddha. At the summit there are three ‘stupa’, stone mounds which once held relics. Volcanic eruptions are a risk to the site. The most recent eruption, in 2010, covered the site with a thin layer of ash. It is feared that an eruption may damage the fine carving which covers the monument. 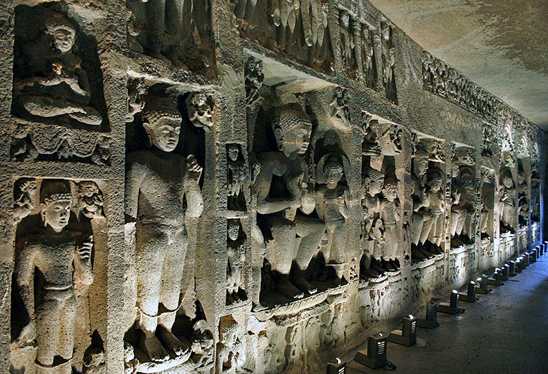 Construction of these caves occurred fitfully from 200BC to 600AD. Like Borobudur, the cave lay forgotten for centuries. They were rediscovered by a British officer, John Smith, while out hunting for tigers, in 1819. You can still see his name and the date, faintly written in pencil, on the walls. Twenty nine caves have been excavated, though not all of them are richly decorated. Those that are, are full of gorgeous sculptures and paintings, considered masterpieces of ancient India. For the most part these frescos tell stories from the Buddha’s life, while others offer a clear insight into the lives of the ancient peoples who carved the caves. 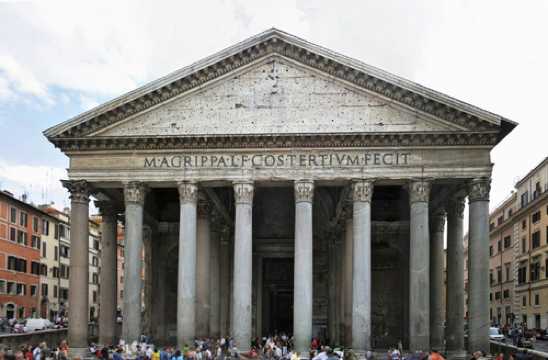 The Pantheon, “All God”, is one of the best preserved Roman buildings. A temple had been on the site for many years but the one visible today is that designed by the Emperor Hadrian, and built in 126AD. The building was converted to a Christian church in the 7th century, but can still be enjoyed in something like its original form. The front of the building resembles a classic Roman temple portico, supported by columns. Roman temples, for the main part, were to be enjoyed from the outside. The Pantheon is different – it can only be appreciated from inside. Behind the portico is the rotunda, a round space, under the largest dome built by the ancients. Set in the center of the dome is a circular hole, the oculus. The oculus is the only source of light and is an elegant allegory of God. At no time will the light ever touch the floor, as if to say that all we can know of God is by indirect means. 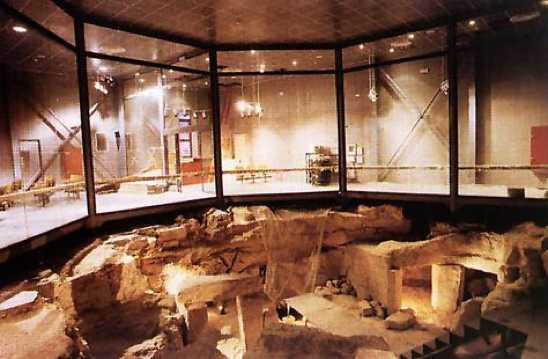 The Hypogeum is truly ancient as construction began ~3500BC. It is the only example of a prehistoric temple being built underground. The carved space has been used variously through its history, being turned into a necropolis at some point in the distant past. The Hypogeum is a mixture of natural caves and excavations over three levels. The walls are smoothly carved and have reflections of structures found elsewhere above ground on Malta, as if to suggest the above being brought below. A ‘speaking chamber’, a rounded niche carved into one wall, allows anything spoken into it to echo throughout the Hypogeum. Visiting may be tricky as, for preservation reasons relating to the ochre paintings on the ceiling, only 80 people are allowed entry per day. 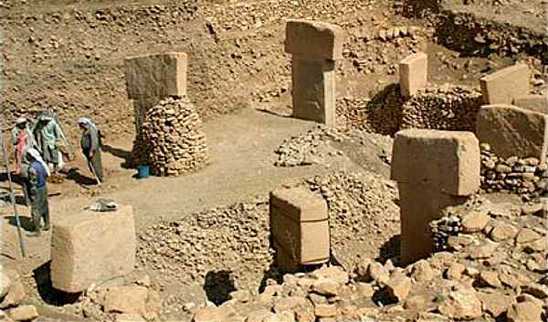 The importance of this site has only very recently been recognized. If the Hypogeum is ancient then Göbekli Tepe is primordial. Göbekli Tepe is the oldest man-made structure yet discovered. The site is composed of twenty circular structures spread over a hilltop. What remains today are large limestone pillars decorated with abstract designs of carved animals. So far depictions of snakes, scorpions, birds, boars, foxes and lions have been uncovered. The pillars have been traced to a nearby quarry where unfinished ones can still be seen. While this site cannot be definitely said to be religious in nature, it is certainly intriguing. The site has been dated to the tenth millennium BC. This is earlier than any civilization yet known. If it is a temple then this must surely be one of the first ever made.