They’ve been dead for a long time, and it’s proven excessively difficult to keep ’em down! Zombies are nothing new to myth, folk tales, print or cinema – but what has drastically shifted over the last 35 years is their popularity. Though not openly given boardroom status with other popular monsters (vampires, werewolves, demons etc.) zombies have earned reputable stripes as an entire species capable of wiping out humanity! Regardless of the form they take, the general term “zombie” has generated a number of extremely unique appearances – the most shocking, original and talked-about versions lie here… 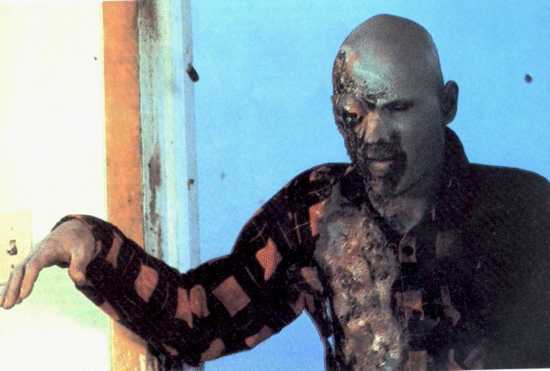 As seen in George A. Romero’s original classic, Dawn of the Dead, this is one zombie that undoubtedly most everyone has seen. On nearly every poster and advertisement for the film’s numerous video releases (from Beta to Blu-ray), this example of the walking dead holds high marks for being disturbingly real, and more than a pop icon. Added to that resume, this is one of the few zombies who manages to almost catch African-American hero Peter Washington (Ken Foree) off guard. 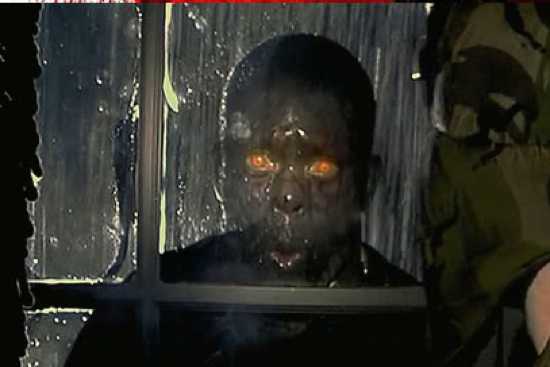 It’s not difficult to envision Private Mailer as a most unremarkable soldier in life, one who was likely failing at even the most standard military obligations. Given the weeks since the initial outbreak of a deadly monkey “Rage Virus”, as well as the optimal safety-in-numbers that Mailer shared with his squad of perverted cohorts, it’s somewhat ridiculous that he managed to get himself infected at all. One must also stress the term “infection” here. Purists, of course, understand (and enforce) the concept that Mailer is no real zombie – despite the overwhelming media-fueled misconception. However, despite my own puritanical leanings, I’m willing to accept the inclusion of Private Mailer on his own terms. He is, let’s face it, a member of 1) an overwhelming population of diseased individuals, 2) intent on killing or subverting any non-infected individual who comes across, and of course, 3) a victim of his own nature. This qualifies as a “non-dead zombie status” in my book. Added to those similarities, Mailer is also one of the more ferocious and dangerous “revivals” that you could hope to meet. Thrashing about as a backyard surprise in the third act of Danny Boyle’s 2002 film, Mailer quickly proves his lethality when Cillian Murphy’s leading hero, Jim, literally lets him off the chain. 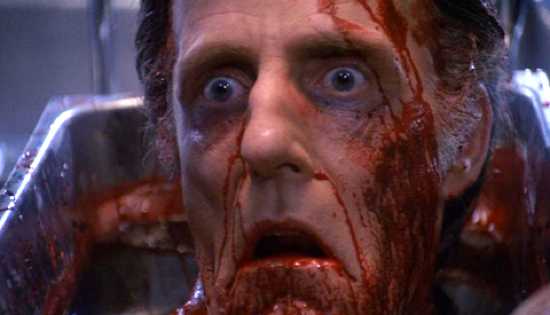 Zombie speak? It’s certainly not the first time that it has happened. It is, however, one of the few instances where a zombie demonstrates a seething hatred for his own murderer – in this case, Dr. Herbert West, played by Jeffrey Combs. After decapitating Hill with a shovel, West quickly re-animates his former colleague with his serum. What follows is a frighteningly surreal and camp-filled satire of revenge. Never before has a zombie been so manipulative, cunning, or purposeful – a trend that has continued with pack-leading performances such as Eugene Clark’s “Big Daddy” in Romero’s fourth-installment Land of the Dead. Thank you Dr. Hill. 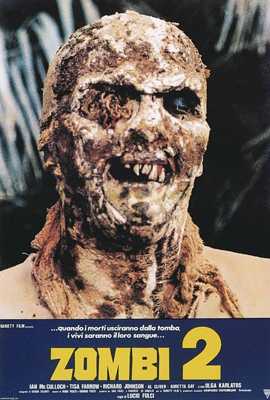 Half a face and rancid with worms, this zombie includes mention merely for the fact that is a well-realized depiction of the walking dead. ‘Nuff said.

The mention of the Basement Zombie is not merely to appease fans from the John A. Russo camp of Return of the Living Dead films. Totally not. While those films are semi-enjoyable shlock that are best taken on their own terms, the #6 spot has to go to the one zombie in the original “Return” film that, well, looked the most like a zombie. Slimy, rotten, and putrid to the touch, the Basement Zombie is actually pretty gruesome in its detail. It also affects what is perhaps one of the more memorable “zombie walks” that is complete with a total lack of muscular coordination. Don’t let it fool you though, this is the zombie that got the drop on gang-leader and angst-ridden nihilist “Suicide” and effectively renamed him to “Murdered.” If the gruesomeness of his appearance and the hilarious gait weren’t enough, please consider that this zombie is perhaps responsible for popularizing the phrase: “Mooooore Braaaaains.”

Having come so far and shown to be so profitable, it’s an enormous treat for zombie-followers everywhere that we now have our own TV program. Based off Robert Kirkman’s ongoing “The Walking Dead” graphic novel series, the show features a cast of desperate human characters attempting to survive in a world without a pulse. As the first fully visible (no pun intended) zombie on screen, the “bicycle zombie” is an astonishingly well-designed piece of craftsmanship from FX designer Gregory Nicotero, but it’s not just the make-up. As bewildered Rick Grimes, the show’s main protagonist, takes pity on this zombie, it’s a poignant reminder that the walking dead are victims of their own nature. 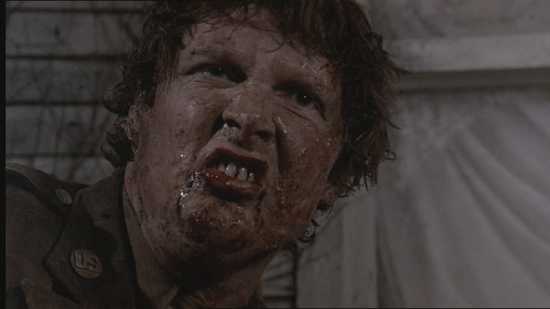 Taking a moment to be real, answering what has been (perhaps) the single most frightening depiction of an animated corpse on screen is likely to involve at least some mention of one of Stephen King’s more gruesome creations. Killed in the World War II and laid to rest in a cursed Indian burial ground, young Timmy Baterman returns to his father’s house in a small town in Maine, but is clearly not the person he used to be. Depicted as a demonically-possessed resurrected corpse, Timmy (like all those that lie in the sour grounds beyond the pet cemetery) is a shadow of his former self. So unnerving an idea as it is, producers of the 1989 Mary Lambert-directed film adaptation chose wisely to include Timmy’s story pretty much as it is read in the book. 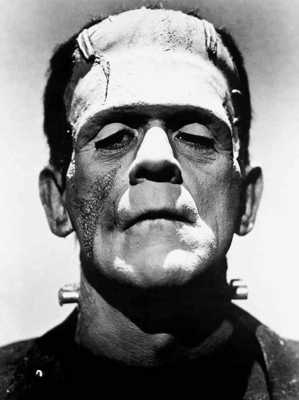 The silver screen’s ultimate zombie-like character deserves mention on this list, if not for his memorable depiction throughout the years, then for his longevity. Written as the “Modern Prometheus” by Mary Shelley in the early 19th century, Frankenstein’s Monster has endured as one of the most frightening symbols of science and genius run amok. A damnation from birth, the monster represents all that is misunderstood and feared about the unknown. Alas, it’s easier to destroy what we hate. As curious as he is deadly, the Frankenstein Monster is one zombie in particular that has consistently retained a reputation for sympathy from all audiences. How can you blame a beast? 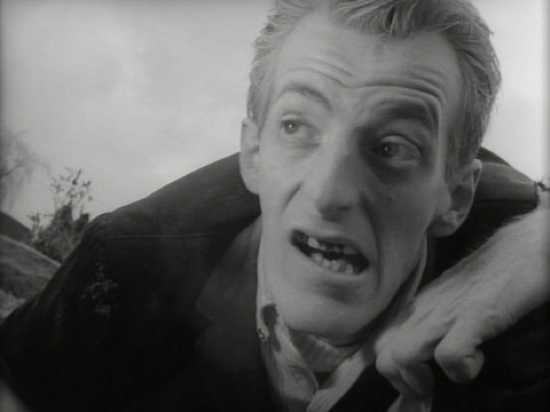 The stuff of nightmares. The cemetery zombie in George Romero’s original Night of the Living Dead could easily be considered the #1 contender, and by rights, at least deserves that recognition. This is the zombie that started it all, the first of the Romero zombies, and the first of the “leading role” zombies. After killing her brother by smashing his head on a grave marker, cemetery zombie turns his deranged-grimace towards Barbara and then mercilessly chases her through the woods. The cemetery zombie is also uniquely agile and can trot at a good clip. Though he’s free of any severe deformity or apparent cause of death, this is the kind of zombie that reminds us that death is on the cards for everyone and that the walking dead can be our own neighbors turned rabid. 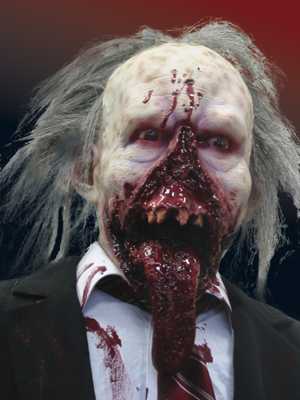 “Dr. Tongue” as he was nicknamed by designer Tom Savini, is arguably the single greatest zombie-design for any living corpse in either film or print. Seen in the opening moments of George Romero’s Day of the Dead, Dr. Tongue emerges from a desolate Ft. Myers, Florida, beckoned by the desperate cries of a human rescue effort. With his lower mandible likely blasted away by a poor marksman, Dr. Tongue is a curiously pathetic example of a zombie because he may or may not represent any real threat! Although Romero’s films make it clear that all zombies eat not for nourishment, Dr. Tongue is likely not even a threat for contamination. In the almost 30 years since Day of the Dead’s original release, few zombie designs have come close to matching the gruesome reality that Dr. Tongue represents: there’s only one way to kill a zombie. You have to shoot them in the head.