When spring is in full swing, there is no denying how beautiful the world looks. The trees get new leaves and with them come an array of colorful flowers. Butterflies and hummingbirds are everywhere as the sombre winter mood lifts. It’s my personal favorite time of the year. In this list we will take a look at some amazing flowers which, sadly, you probably won’t see this coming spring. These are the rare, endangered and in some cases extinct in the wild flowers. The reason most of these carry the title of rare, is because humans do not have the ability to work in perfect harmony with nature. For example, Humans build a dam, the dam prevents a specific river from flowing freely, which prevents a specific frog or fish from breading, which results in a specific kind of bird not getting food, which results in a specific kind of flower not being pollinated, which can eventually lead to the extinction of that plant. In that one scenario of building a dam humans have basically killed off three species, and history is filled with hundreds of similar occurrences. Regardless of what drove them to become rarities, the following plants are far and few between, and having the opportunity to see one for yourself should be a celebrated occurrence. 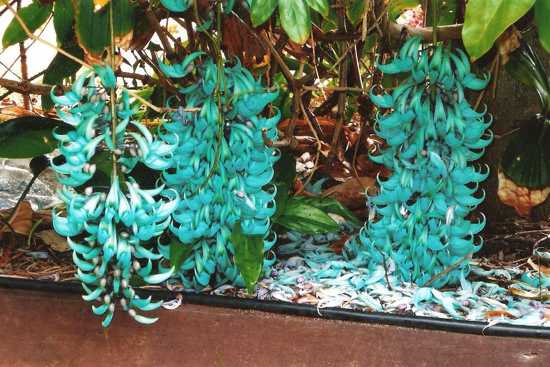 The jade vine is a rare woody vine native to the tropical rainforests of the Philippines. It is a member of the pea and bean family and is closely related to kidney beans. The plant carries claw shaped flowers which grow from hanging trusses; they can reach up to three meters in length. The flower’s color can vary from blue green to mint green. The species has proven extremely difficult to propagate, and is considered an endangered species due to the destruction of its habitat and a decrease in natural pollinators. 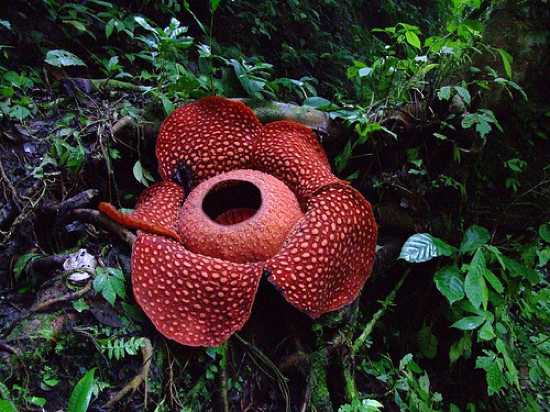 This fascinating flower is found mainly in low lying tropical rainforests of Indonesia. This is one of the world’s rarest, most endangered and largest flowers and it can reach a total width of over a meter. The Rafflesia’s survival is totally dependent on a specific vine called the Tetrastigma vine. As the Rafflesia is a bodiless, stemless, leafless, rootless parasite, it requires the vine for nourishment and support. It is also a carrion plant, which means that it releases a pungent rotten flesh smell when in bloom to attract flies and carrion beetles to aid in pollination. Once in bloom, the flower will only last about a week before dying. 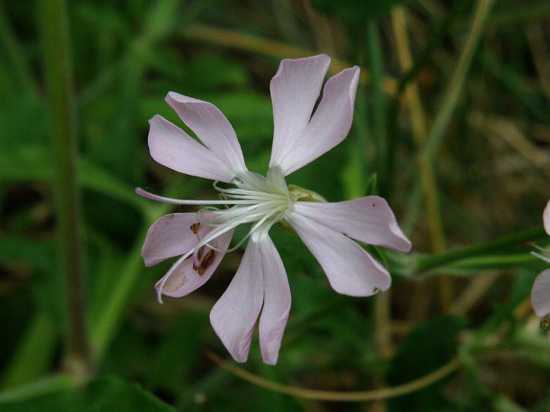 This species of Campion is particularly rare and is only found on the high cliffs of Gibraltar. This plant was believed extinct by the entire scientific community outside Gibraltar in the 1980s but the Gibraltar botanical section knew there were a few specimens left. Sadly, by 1992 all traces of the plant had vanished and it was declared extinct. In 1994 a single specimen was discovered by a climber on the inaccessible cliffs and the species came back to life. It was propagated at the millennium seed bank and specimens are grown at The Almeda Gibraltar Botanic Gardens as well as the Royal Botanic Gardens in London. 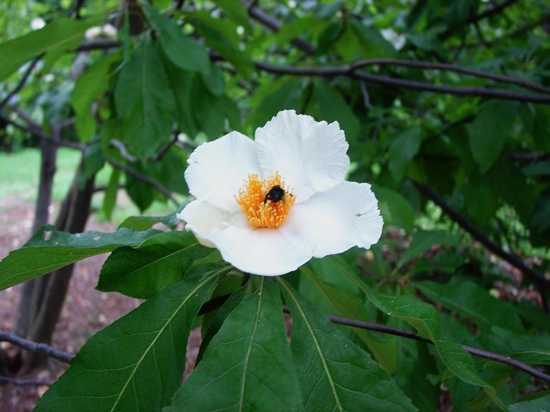 This tree is a part of the tea family but is the sole species in its genus and a very rare flowering plant. The tree is native to the Altamaha river valley in Georgia, but has been extinct in the wild since the early 19th century. In fact this beautiful tree is only known today because of the Bartram family, who were avid horticulturists and propagated the tree before its extinction in the wild. The plant, which has fragrant white blooms and leaves that turn into a bright red color in fall, is now a popular ornamental plant. All the examples of this tree today stem from one of the trees propagated by the Bartram’s. 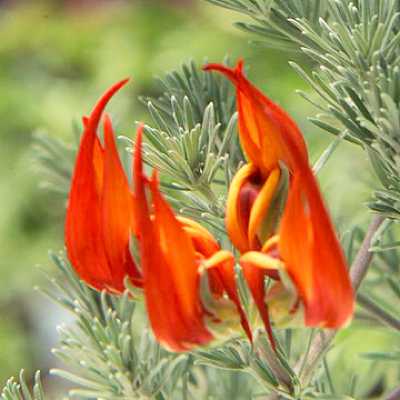 This is a beautiful flower that has been classed as exceedingly rare since 1884. It is believed to be completely extinct in the wild, but a few individuals might have survived. This stunning plant is endemic to the Canary Islands and is believed to have originally been pollinated by sunbirds, which have long since become extinct in the Canary Islands. This could help to explain the scarcity of the plant. Experiments have been undertaken to find new pollinators for the flowers, in hopes that they can successfully be reintroduced to the Islands, but as of 2008, no fruit had been successfully produced. The Parrot’s beak is however cultivated in the horticulture trade, which can allow even you to own one! 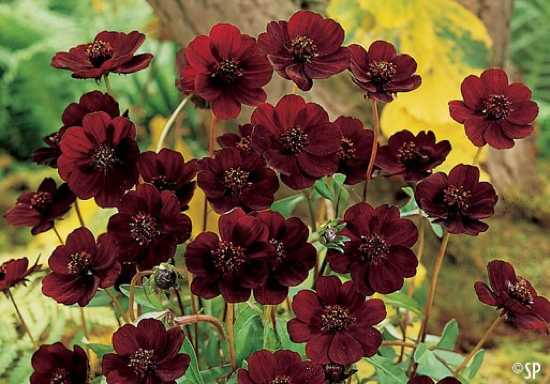 This is a dark red to brown species of Cosmos, native to Mexico. Sadly it has been extinct in the wild for over a hundred years. The species survives today as a single non fertile clone, which was created in 1902 by vegetative propagation. The flowers which are produced by the plant are a rich deep red to brown color and grow to about 3-4 cm in diameter. The flowers have a lovely vanillin fragrance in the summer (also found in vanilla beans, some coffee beans and some cacao beans), which also makes it a wonderful ornamental plant. 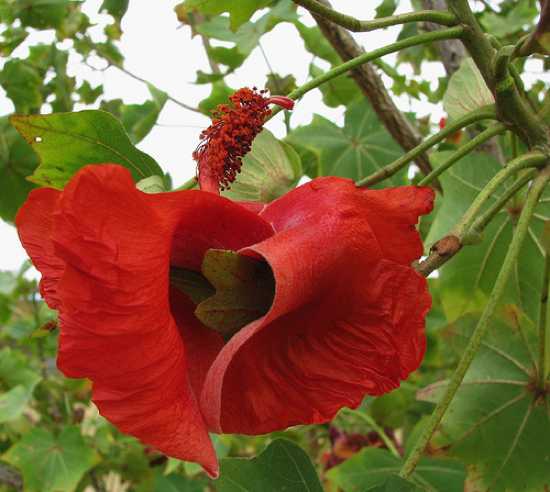 This is an extremely rare tree, endemic to Hawaii. It was discovered in 1860, at which time only three specimens could be found. The tree proved difficult to propagate, and by 1950, after the last seedling died, it was deemed extinct. In 1970 a sole survivor was found, which was sadly destroyed in a fire in 1978. Luckily one of the branches of that last remaining tree was saved, and grafted into 23 trees that exist today, all of which are situated in various places in Hawaii. The Kokai is a small tree that grows to about 10-11 meters high. Their most striking feature has to be the hundreds of bright red flowers that mature trees produce annually. Sadly that is a rarity which few will be privileged to see. 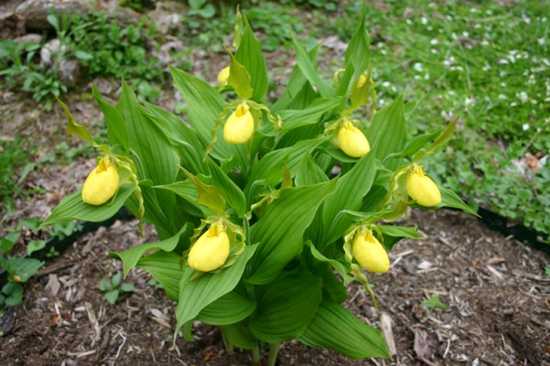 This is an extremely rare type of wild orchid found across Europe. Britain’s only example of this plant, which used to be more common and widespread, can be found on a golf course and has been under strict police protection since 1917. A single cutting can be sold for US$5000, which is shocking as the plant is very difficult to propagate. Its seeds bear no nourishment for the growing plant, so it lives in a symbiotic relationship with a specific type of fungus, which provides it with nourishment, until the adult leaves can produce enough nourishment for the plant, at which time the fungus will also live off it. There are many types of Lady slipper orchids, many of which are rare. This specific type, has dark purple to almost red brown tendrils with a bright yellow “slipper or moccasin.” 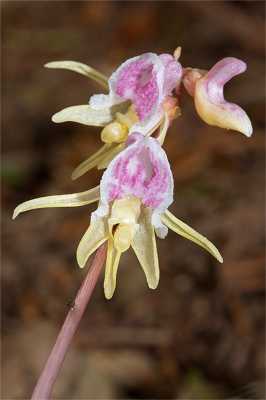 The Ghost orchid is a fascinating rare plant that was presumed extinct for almost 20 years, only recently did it rear its head again. The plant is so rare because it is basically impossible to propagate. It has no leaves, does not depend on photosynthesis and does not manufacture its own food. Like the Lady slipper, it needs a specific fungus in close contact with its root system, which feeds it. The Ghost orchid never grows leaves, and will therefore always depend on the fungus for its nourishment. The Ghost orchid can live underground for years, without showing any external signs and will only bloom when all conditions are optimum. This explains why some orchid enthusiasts search for years and years just to have a glimpse of this elusive flower. 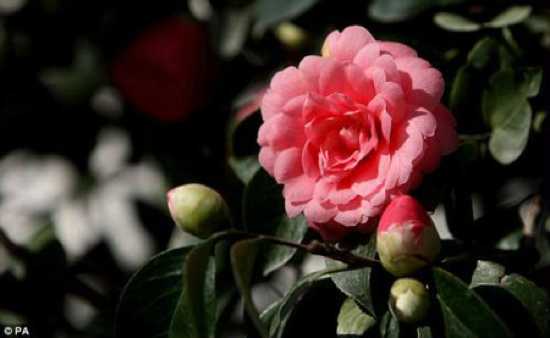 This is probably the rarest flowering plant in the world as there are only 2 known examples. One can be found in a garden in New Zealand and the other is situated in a greenhouse in Britain. The plant was originally brought to Britain from China by John Middlemist (after whom the plant was named) in 1804. It has since been completely wiped out in China. The plant in Britain remained barren for years and only started bearing flowers recently. The flowers are, contrary to its name, bright pink in color and look almost rose like. It is believed to be highly possible that more examples of this species has survived in people’s gardens, unbeknown to them, as it was once sold directly to the public by John Middlemist.