The world has nearly 200 countries. We often hear of unique customs, natural wonders, and remarkable structures that are dotted around the globe. Tourist boards are quick to advertise the exclusive treats they have to offer.

But how much do you know about what countries don’t have? Are you ready to embark on a journey where there is nothing to be seen? No tickets necessary. 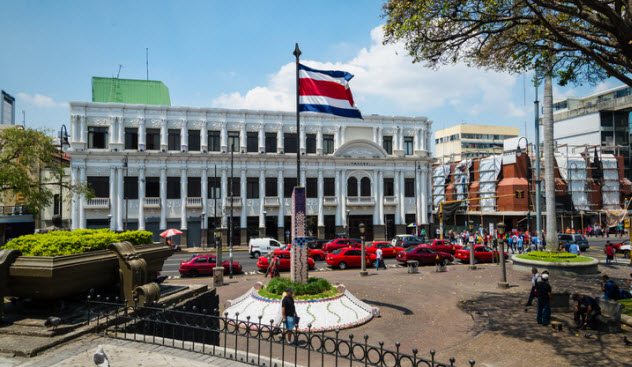 There seems to be a constant stream of wars being waged across the world, and 2017 was no exception. Battles are fought, countries are invaded, and lives are lost on a daily basis. Surely, one of the main duties of governments is to provide adequate protection for their citizens.

Having a military, army, navy, or, in the case of Japan, a “self-defense force” is usually an uncontested given. Vast amounts of money are diverted from constructive projects and are instead used for more destructive means. A necessary evil some might say.

Costa Rica is one country that bucks the trend. It has had no army or military since 1948. The president at the time, Jose Figueres Ferrer, embedded in the new constitution that the military would be abolished and the money would instead be directed toward improving the country. Education, culture, and health would take center stage as well as the improvement of the police force.[1]

That is not to say that Costa Rica is without problems, however. There are issues within the country, such as border contentions with neighboring Nicaragua and the thoroughfare of drugs from south to north. Still, it takes a certain amount of confidence to forego a military, and Costa Rica is in fact just one of over 20 countries without official military forces. Here’s to giving peace a chance. 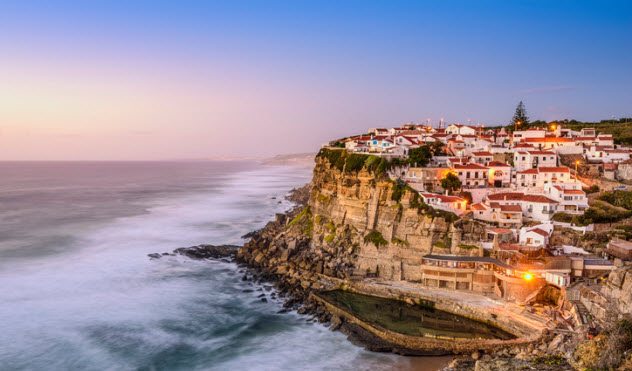 With Canada and many US states in various stages of legalizing cannabis, it may seem that they are the leaders in transforming the so-called War On Drugs. The Netherlands is famous for its coffee shops and liberal attitude toward marijuana. But when it comes to hard drugs, many are surprised to learn that another European country leads the way in tolerant attitudes: Portugal.

Portugal decriminalized all drug use in 2001. Yes, all drugs! Even heroin and cocaine. Portugal decided to take a somewhat unique approach to drug use—treating it as a public health issue rather than a criminal one.

Since doing so, Portugal has one of the lowest death rates due to fatal overdose when compared to the rest of Europe. Portugal has a barely registering rate of only 3 deaths per million as opposed to 44.6 in the UK and an EU-wide average of 17.3.[2] While it would be unwise to assume that this could be the only factor for such a low rate in Portugal, it does make an interesting case to behold. 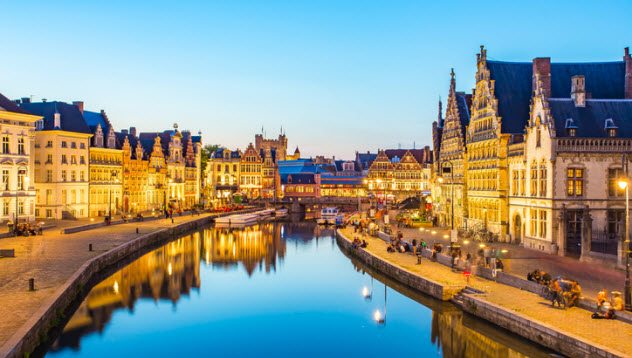 One of the requirements for a functioning sovereign state would be to have a government to oversee all affairs. In 2011, Belgium broke the world record for being the country without an official government for the longest period of time.

A total of 589 days went by without a government in office. Politics in Belgium is very decentralized in nature, so it meant that much of the day-to-day activities went on as usual. Bureaucrats still came in to work, and the streets were free from rioting.[3]

Western Sahara is a country located to the south of Morocco, bordering both Algeria and Mauritania. It was colonized by Spain in 1884 and, following the decolonization period after World War II, was subsequently annexed by a freshly independent Morocco in 1957.

It has been a “disputed territory” for many decades, claimed by both Morocco and the Polisario Front. With no agreement reached even with the efforts of the United Nations, it appears that Western Sahara will continue to lack a stable government for many years to come.

7 No Names On Stamps 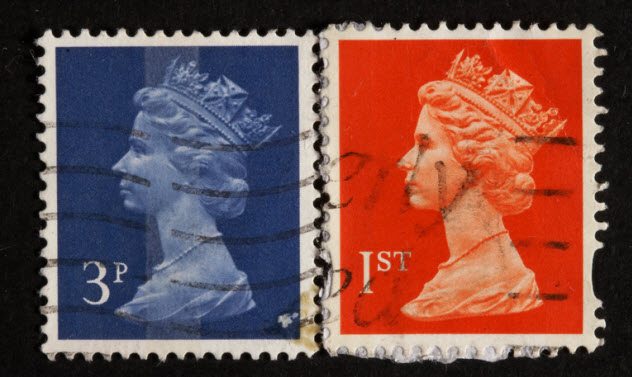 There is just one country in the world that is not required to include its country name on its stamps, even when they are being used for sending abroad. If you are a philatelist (stamp collector), you probably have come across this rather unusual fact before. For everybody else, prepare for your previous stamp knowledge to become unstuck.

In 1840, Great Britain was the first country to start issuing stamps. It proved highly popular and solved one of the biggest problems in postage—proof of payment. British stamps have always featured a portrait of the ruling king or queen at the time, and this has long been a defining feature.

In 1874, the Universal Postal Union allowed Great Britain to be the only country in the world that did not require a country name to be included in the stamp design, something which continues today.[4] 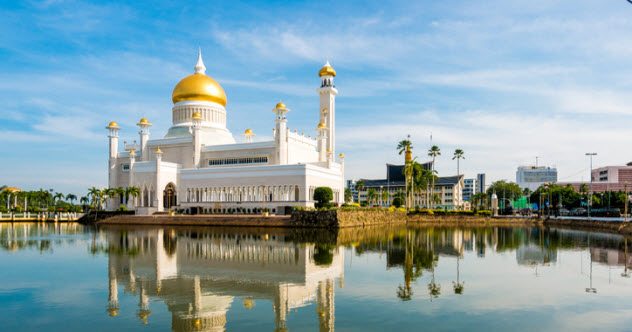 Although the numbers are constantly changing, some recent estimates put the United States’ external debt (defined as total public and private debt owed to nonresidents) at a whopping $17.91 trillion. The United Kingdom’s is at $8.13 trillion. The entire world is over $76 trillion in debt. In fact, just about every country in the world owes millions, billions, or trillions of those pesky dollars to others.

Although it’s said that “money makes the world go around,” perhaps it would be more fitting to replace “money” with “debt.” It doesn’t seem possible that the economic system could function under such conditions, but even more surprising is that Brunei, a small country located on the island of Borneo in Southeast Asia, owes absolutely nothing to anyone. Not a dime. They have $0 in external debt.

How has Brunei managed to avoid this quagmire of external debt? Two words: “gas” and “oil.” These two commodities account for the country’s incredible wealth.

Following independence from the UK in 1984, Brunei has done extremely well for itself. Brunei citizens enjoy a very well-disposed welfare state and even have food and housing subsidized.[5] Even government debt is extremely low at 3.1 percent, with Hong Kong being the only country to fare better. Congratulations, Brunei.

5 No Sphere To Call Home 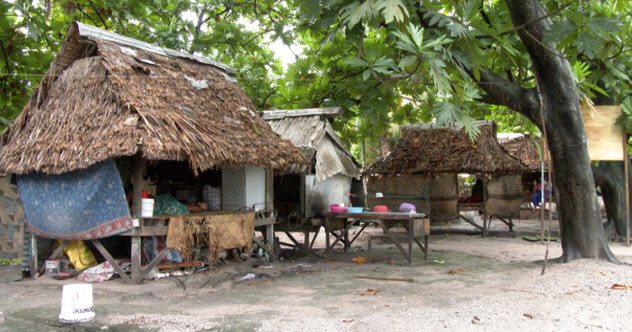 What could link these words together? You might be surprised to know that London, Paris, Poland, and Banana are all villages on Christmas Island. Kiritimati, which is actually a respelling of “Christmas,” is found in the center of the Pacific Ocean and belongs to the Republic of Kiribati.

Kiribati is a respelling of “Gilberts,” this time named after British explorer Thomas Gilbert. Having been colonized by the British, invaded by the Japanese, and used as a nuclear testing ground by the British and the Americans, Kiribati has faced its share of struggles.

You might have heard the name “Kiribati” when the New Year is announced. The country is located at UTC+14, so it is one of the first countries to welcome the New Year. This means that the 180th meridian, on the opposite side of the Earth to the prime meridian, runs down and dissects this group of islands. The equator also runs across and through the islands. Thus, Kiribati is very special as it is the only country that is found in all four hemispheres.[6]

Unfortunately, due to the low-lying nature of the islands, Kiribati is facing fresh challenges from rising sea levels. In 2014, the Kiribati president purchased land in Vanua Levu, Fiji, to try to reduce the anticipated problem of “climate-change refugees.” 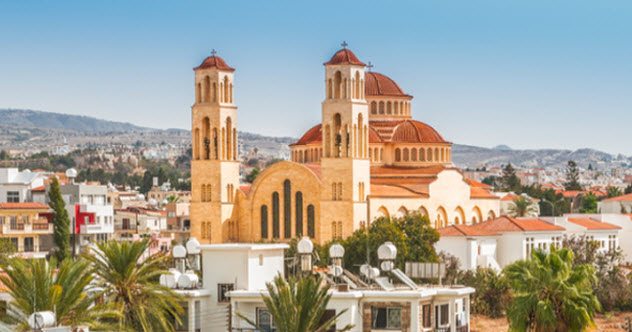 The World Cup, the Olympics, and any other major international sporting event is a chance for competitors and citizens to get behind their countries, wave their flags, and sing (or mumble) their national anthems. The UK has “God Save the Queen,” the US has “The Star-Spangled Banner,” Brunei has “God Bless the Sultan,” and Equatorial Guinea has their fantastically named “Let Us Tread the Path of our Immense Happiness.” Quite a mouthful.

You could be forgiven for assuming that a national anthem would be reserved for one country. However, the Greek national anthem is also the official anthem for another country, the Republic of Cyprus. It has been sung there since 1966. 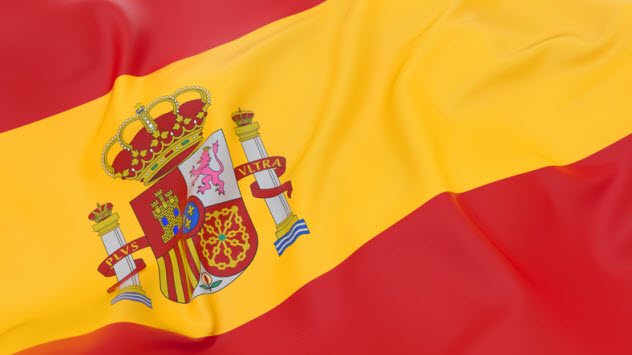 Although the Cypriots have adopted another country’s anthem, at least they have some words to sing when the tune is played. Have you ever watched the camera pan across the players’ faces at the World Cup and noticed that they are hardly moving their lips? This might be because they are Spanish.

The national anthem of Spain has no lyrics. “Marcha Real” (“Royal March”) has no official lyrics, well not since 1978 at least. Previously, the anthem did have words, but they were deemed too “fascist.” There have been a few attempts at finding a solution to the wordless anthem, but it seems that the Spanish will be humming along for the time being.[8] 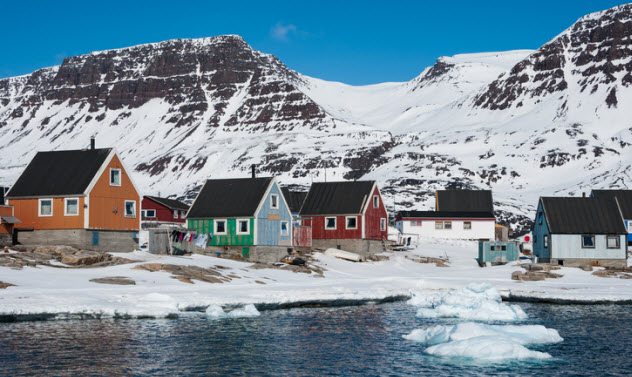 There are many places where it would be difficult for grass to grow. Countries with hot desert climates might struggle to grow grass, especially the green kind, and are required to go to extensive means when it comes to irrigation. Still, growing grass is technically possible in these inhospitable climates.

According to some unsubstantiated rumors, one of the stipulations for competing in international football under FIFA is being able to maintain a grass football playing field. This would seem to be a problem for Greenland.[9]

Despite its name, Greenland is not very green. There is not a single grass playing field in the country, and the weather conditions make it an impossible aspiration. A further problem is of a political nature. Currently, Greenland is an “autonomous region” of Denmark. So while they do have a national football team, they are not technically a country.

Together with the lack of grass, Greenland certainly has a tough job to convince FIFA. But times do change. 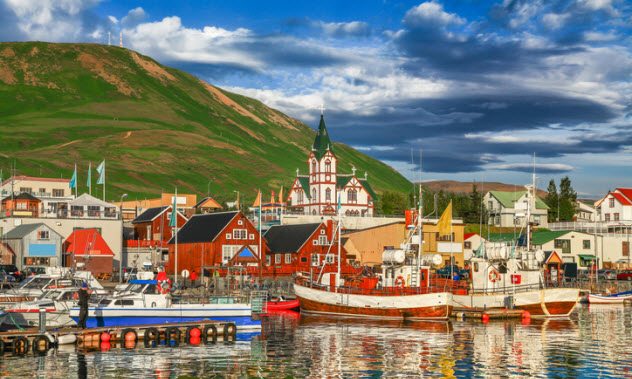 Mosquitoes are the world’s deadliest animals. Sharks only kill around 10 people per year, hippos around 500, dogs around 25,000, and snakes about 50,000. In second place, humans kill 475,000 people each year. However, through the transmission of diseases such as malaria, dengue fever, yellow fever, and encephalitis, mosquitoes are responsible for killing the most by far—approximately 725,000 people annually.

Mosquitoes are found in almost every country in the world. So, is it possible to escape the annoying hum, the irritating sting, and the possibly deadly diseases carried by mosquitoes?

Yes—if you move to Iceland![10] Compared to Greenland, Iceland is much greener and Greenland is much icier. What’s with the confusing names, you might ask? In short, the Vikings jumped to conclusions when it came to naming the islands. In their defense, however, the climate was a little different back then. In any case, Iceland doesn’t have any mosquitoes, but Greenland does!

The author is a traveler and part-time experience collector. He can be found on long bus journeys or in secondhand shops.

Read more bizarre facts about countries on 10 Countries With Insane Histories That You’ve Never Heard Of and 10 Of The Shortest-Lived Countries.