After my previous fruit lists I have had some requests for a vegetable list, the research of which led me to a shocking discovery. In my plight to discover if I could use tomatoes for this list, I discovered that half the vegetables that I thought where vegetables, aren’t technically vegetables at all, but rather fruit. Technically speaking a fruit grows from the ovary of the flower and contains seeds. That means that tomatoes, pumpkins, squash, cucumbers, peas, beans, courgettes and peppers are all technically fruit and not vegetables. On a technical level a vegetable is any edible part of a plant excluding the fruits, so stems, roots, leaves and flowers. For this list I have decided to go with the less technical classification of – If you generally cook it, it is a vegetable, tomatoes included.

Heirloom vegetables are vegetables that are not cultivated for public consumption, or sold to the public. Laws in certain countries like the UK, prohibit the sale of any vegetables not on a national list. These plants have instead been handed down by families and cultures as the name suggests, and their species have been carried on for hundreds and sometimes thousands of years. This just means that there are literally thousands of varieties of vegetables that you have probably never even thought existed. For instance, did you know that the oldest records of carrots (pre 900AD) is from Afghanistan and was anything but orange? In fact it is believed that orange carrots were created from a mutation by the Dutch to honor their royal family in the 1700s. In this list we will take a look at some of these strange, lost vegetables, all of whose seeds can be purchased online. I have not done the list in any special order, as there is really no choosing which is better when it comes to such awesome vegetables. 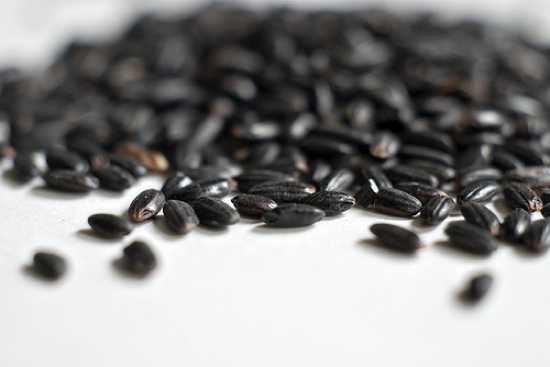 This rice, native to China, is one of several species of black rice. When cooked this rice turns a dark purple color and it has a nutty flavor similar to brown rice. It is high in anthocyanin (a powerful antioxidant), vitamin B, niacin, vitamin E, calcium, magnesium, iron and zinc. It is believed that the name Forbidden rice was given to it, as only the royal family was allowed to eat it. 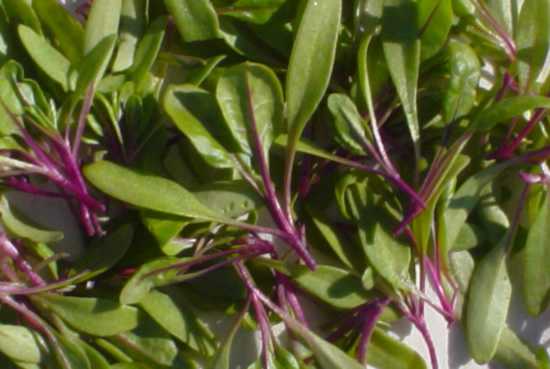 This is a beautiful species of chard, also known as spinach beet or leaf beet. It has dark green, almost flat leaves and a very attractive magenta stalk. It is a very tolerant variety and can withstand both high temperatures and light frost. It can be used to replace Pac choi or spinach in any meal and adds a lovely color variety to foods. 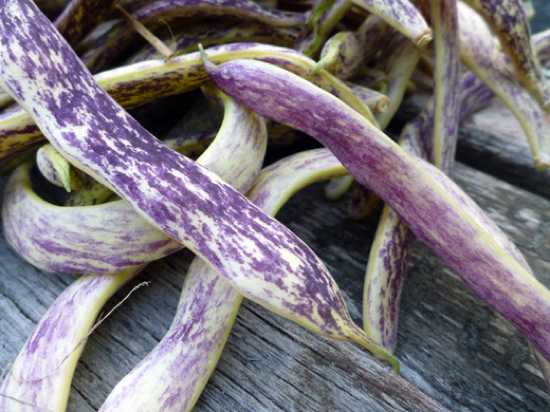 This is a Dutch heirloom bean that has striking purple stripes mottled over a bright yellow color. They are also very versatile and can be eaten raw as a snap bean, cooked with the shells, or shelled in soups and stews. They have a unique, clean, vibrant flavor and are very popular with gourmets and chefs. 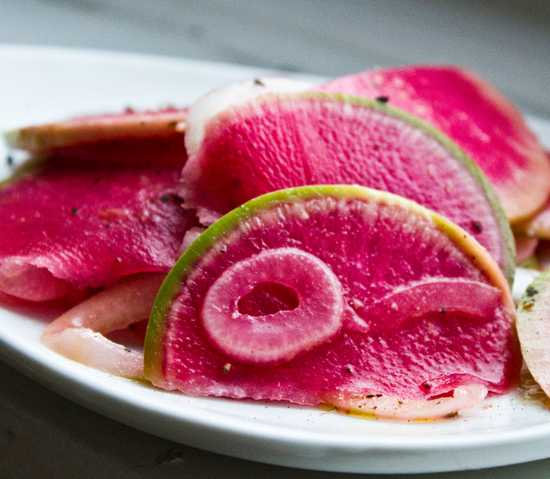 This is a large root vegetable that grows to about the size of a baseball. It forms a part of the horseradish family and has a mild peppery flavor. The watermelon radishes look, as the name states, very similar to a miniature watermelon. It has a soft green to white exterior and is bright pink on the inside. All radishes are high in ascorbic acid, folic acid and potassium and they make a good source for calcium, magnesium and copper. 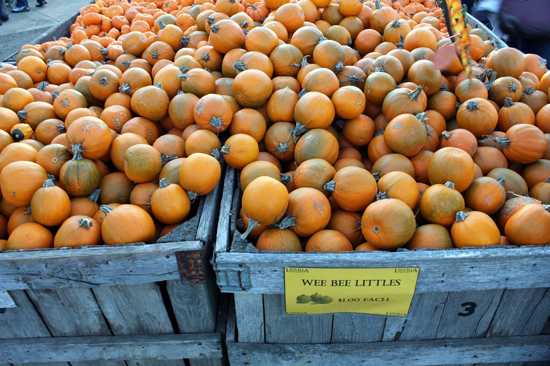 These miniature pumpkins are an American heirloom variety (although the U.S. does not forbid the sale of heirlooms like some other countries do) and can easily fit into the palm of your hand. They are perfect for single servings, have a great sweet flavor and are high in calcium, magnesium, potassium, phosphorus, vitamin A and beta carotene. They are also easy to carve for Halloween and are the perfect size for tea light candles. 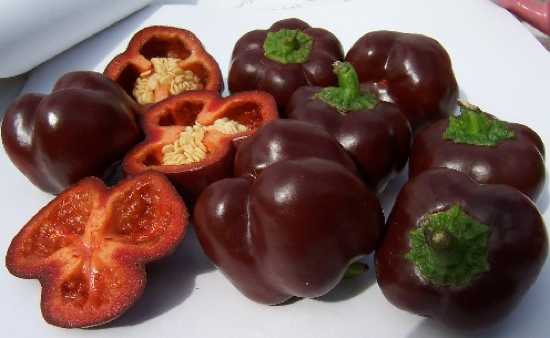 These are sweet peppers with a difference. They turn from green to a rich chocolate color as they ripen. The color is presumed to come from a combination of a dark purple skin and the brick red flesh on the inside. These peppers have very large yields and are very sweet in taste. They make a wonderful edition to salads and are considered a gourmet variety in the U.S. 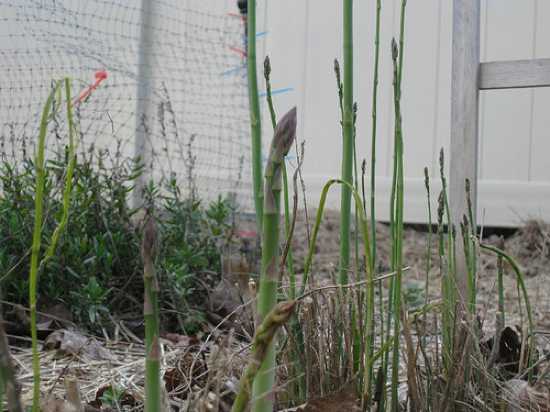 This is an ancient French heirloom variety that grows large spears. They have a fantastic taste and are very tender. The plants are hardy and can survive for many years, but tend to only start producing worthwhile crops by their second or third year. They have a base color of green, with purple colored scales, but can also occur as a more solidly purple color. 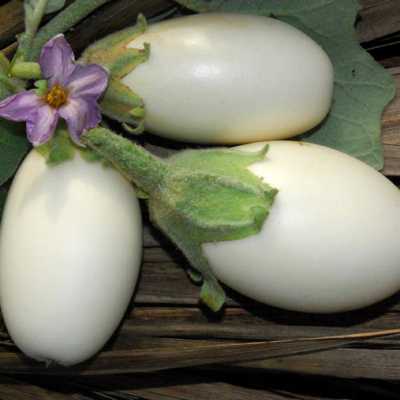 This is a stark white, egg shaped, Japanese heirloom eggplant or aubergine. It is the epiphany of the name as the fruit perfectly resembles white eggs, quite the opposite of the more common, much larger purple eggplants. The plant is high yielding and will usually continue bearing fruit if you continue to harvest. Some of the fruit could turn into a vibrant yellow color, but these tend to be bitter. 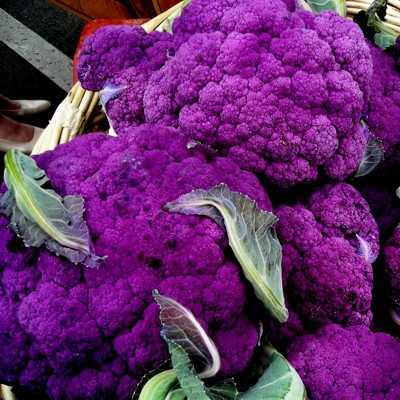 These plants sport stunning, large, bright purple cauliflowers. They are delicious raw with a dip, as well as cooked or steamed. Cauliflowers are high in dietary fibre, foliate and vitamin C, but this purple variety also boasts with high levels of anthocyanin, which can slow blood clotting and prevent heart disease. 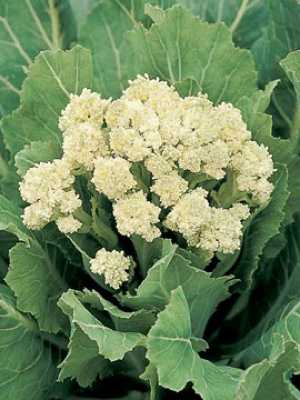 White sprouting broccoli is one of two sprouting broccolis, the other is purple. Sprouting broccoli tends to taste better than shop broccoli, but out of the two, the white is much more tender and sweet than the purple. They form lots of small heads at the end of stalks instead of one large head. These deliciously tender plants are high in Vitamin C, K, B6 and B9. 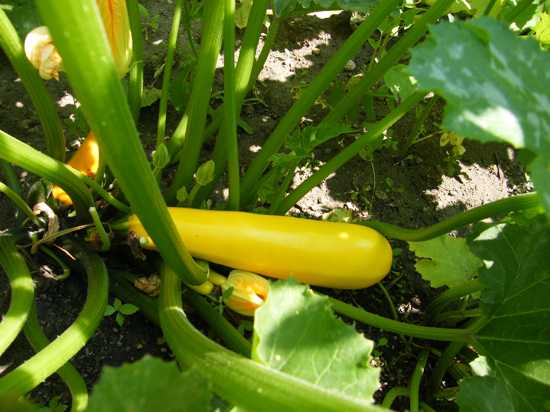 Some other heirloom varieties: Costata Romanesco, Round zucchini.

Gold rush zucchinis or courgettes are bright yellow in color. They have become a popular choice for the vegetable patch and have been found to be less watery and seedy than other varieties. They have a great mild flavor when eaten both raw and cooked. This plant is also extremely resistant against pests, and will not be affected, even is another species of squash right next to it becomes infected. 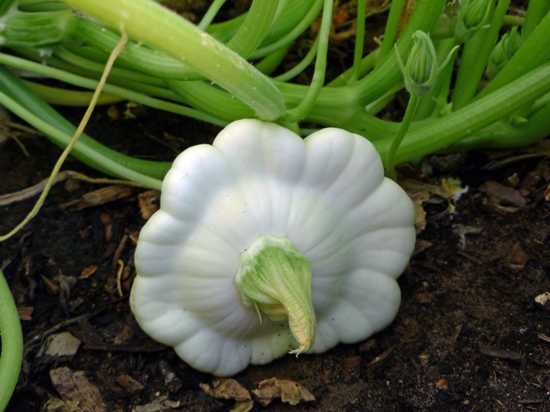 This is an ancient Native American heirloom patty pan squash that is highly resilient and can withstand most squash bugs and vine borers. They have a clean white color and a superb taste. They are best when eaten young or immature but can be harvested at any growth period. They are high in magnesium, niacin and vitamins A & C. 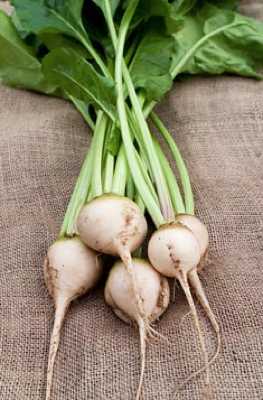 This is a stark white variety of beet that has tender, sweet, flavorful roots. These beets makes a good alternative for use in cooking light colored foods such as chicken, as it will not stain your food purple like ordinary beets do, but still retain the delicious sweet flavor of regular beetroots. They are also high in potassium, iron, magnesium, manganese and phosphorus. 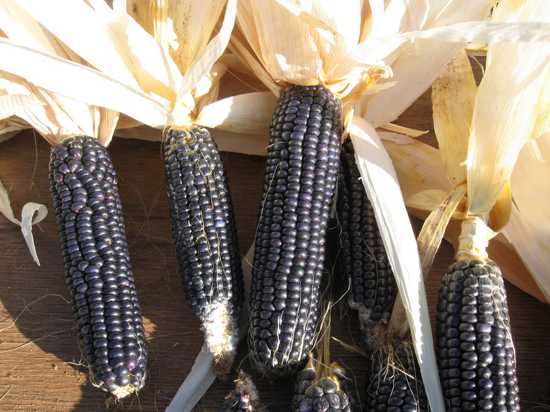 This is a dark blue, almost black variety of corn. It is an ancient heirloom from the Hopi Native Americans, to whom it was a staple food for thousands of years. This corn is generally ground to make blue corn flower and is courser than the yellow and white variety’s, but has a sweeter and nuttier flavor. 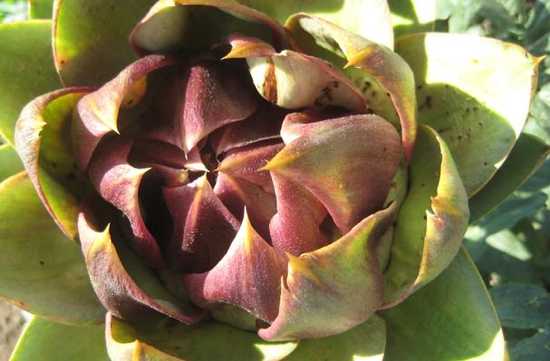 This is an old Italian heirloom variety and produces large purple artichoke heads that are more resistant to heat and cold than green varieties. These beautiful globes are highly coveted by chefs for their tender texture and striking color. The plant has silvery leaves and also makes a beautiful ornamental plant in any garden. 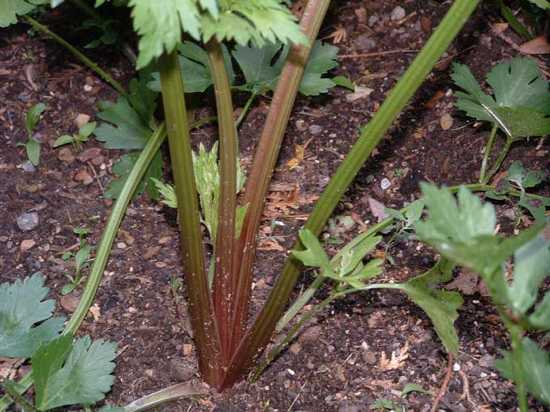 This is a deep red variety of celery. It is extremely frost and cold resistant and has a wonderful flavor. It looks amazing in a garden as an ornamental plant, thanks to the dark pink red stems. This variety is great raw or eaten in soups and stews and will add a great splash of color to your food. 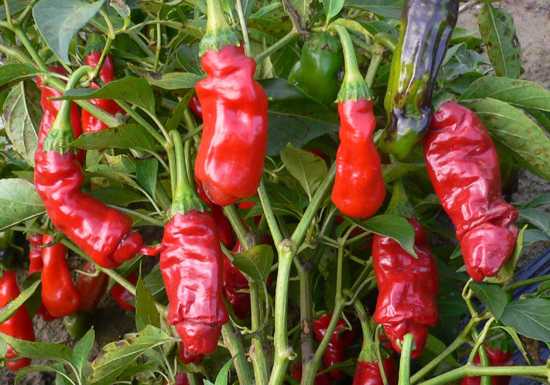 These strange heirloom peppers are also sometime called penis peppers due to their strange phallic shape. They can be found in red and yellow and has a medium heat. These peppers are considered rare and their origin is unknown, but seeds can be purchased from private suppliers and growers. 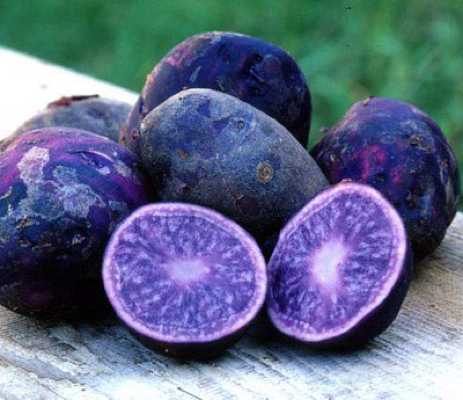 This variety of potato is a true sight of amazement. It has both a bright royal purple color on the outside and on the inside. It contains high amounts of anthocyanin, which is a strong antioxidant found in other purple plants like aubergines. Regardless of the strange appearance, this potato tastes exactly like other white varieties of potato, and it does not lose its color during cooking. This can be used to put an interesting twist in ordinary dinner dishes, by having purple chips or purple mash. 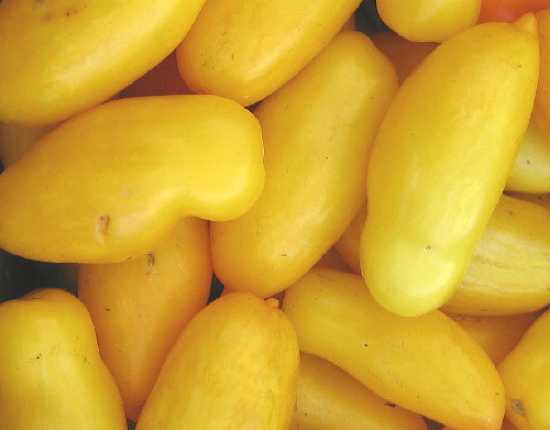 This is a small, oblong shaped, yellow tomato with pale stripes. This plant yields extremely high amounts of fruit near the end of the season. The fruit are quite sweet and fleshy and looks great in a salad or as a more interesting tomato paste. They make a good replacement for ordinary cherry tomatoes and can be eaten straight off the plant. 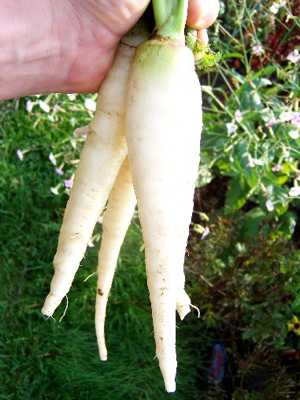 Even though the oldest known carrots where mostly yellow and purple, white carrots have still been around for longer than orange ones has. These lunar white carrots are sweet, tender and almost completely cordless. They have a mild carrot taste and look beautiful in salads, but can replace orange carrots in any dish. As these carrots don’t have any pigment, their nutritional value is slightly lowered, but they do contain health promoting phytochemicals.