When an archaeological site is discovered, the question “what food did these people eat?” might sound unexciting, especially to those used to the idea that archaeology is about discovering lost temples filled with hidden doors and haunted treasures. But understanding what our ancestors ate means understanding their subsistence strategies and their relationship with the environment. The cumulative effect sheds light on some big questions of the human past, such the transmission of technological innovations, cultural contact, and even the spread of agriculture. 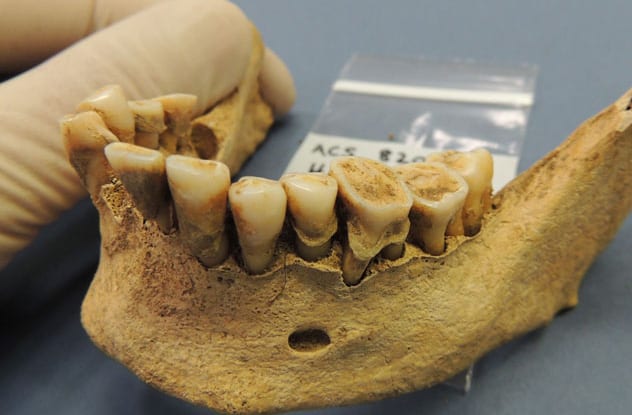 Teeth, made of resistant tissue, tend to survive remarkably well. The food we eat leaves microscopic marks on tooth enamel, and the length and orientation of these marks depend on the food we consume. Modern Inuit groups in Greenland, whose diet is largely based on meat, display mostly vertical marks on the lateral surfaces, while groups living on an almost exclusive vegetarian diet display shorter marks, both vertical and horizontal.

Scientists can not only assess whether a particular group had a diet based on meat, vegetables, or a mix of both but can also arrive at more general conclusions. Fossil teeth from the early Stone Age onward (2.7 million–200,000 years ago) shows interesting results: Newer fossils display a decrease in vertical marks (and their average lengths) and an increase in horizontal marks. As time went by, the diet of our ancestors became more varied and less reliant on meat. 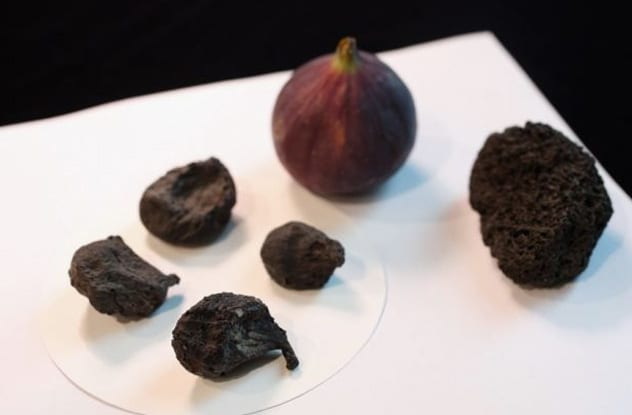 Under some rare and incredibly fortunate circumstances, archaeologists can find meals, almost intact. The ancient city of Pompeii is arguably the most famous example of this kind: Many meals were found virtually untouched, still served at the table and preserved for centuries under thick layers of volcanic ash. We have also identified entire food shops with their products still suitable for recording.

Meals were also an essential part of funerary offerings in several cultures. In Egypt, we have tombs containing not only basic food ingredients such as fish and fruit but also intricate meals like cakes, cheese, and wine. In China, tombs belonging to the Han dynasty (206 BC–AD 220) are filled with meals and even labels attached to the dishes stating their composition. 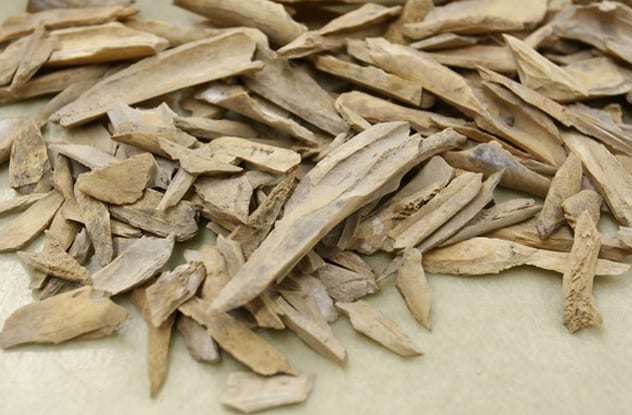 Animal traces such as bones, antlers, and shells provide useful information on past diets. Based on animal bone samples, specialists perform statistical analysis on the age, sex, and the season of the death of the animals.

It may also be possible to assess whether these animals were wild or domesticated. Some aspects of domestication leave traces on the bones, particularly when the animal was used for traction (e.g. camels, cattle, horses), which tends to manifest in osteoarthritis and deformities in the lower limbs. Some domesticated animals like alpacas and llamas present a higher mortality rate on younger animals compared to their wild cousins. 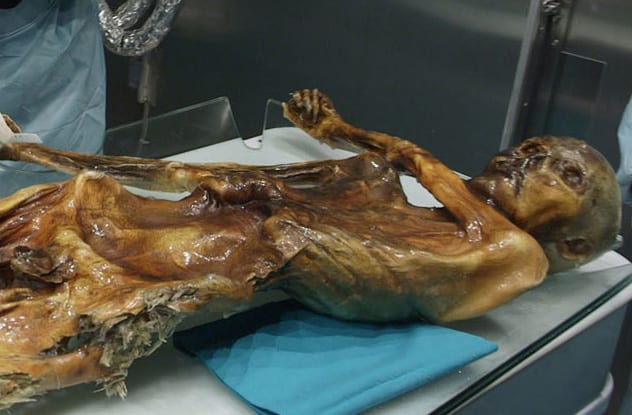 The stomach is made of soft tissue and survives only under rare circumstances, such as extremely dry climate or cold temperatures. Sometimes, it is possible to retrieve samples of food traces from the stomach and other areas of the digestive tract, including the colon and even the intestines.

The famous prehistoric Danish Tollund Man had only eaten plants during the days prior to his death. Forensic examinations on the mummy of Lady Dai (the wife of the Marquise of Dai, second century BC China) retrieved 138 seeds of sweet melon, suggesting not only that she had a phenomenal appetite but also that she died during the summer, when the fruit is in season. 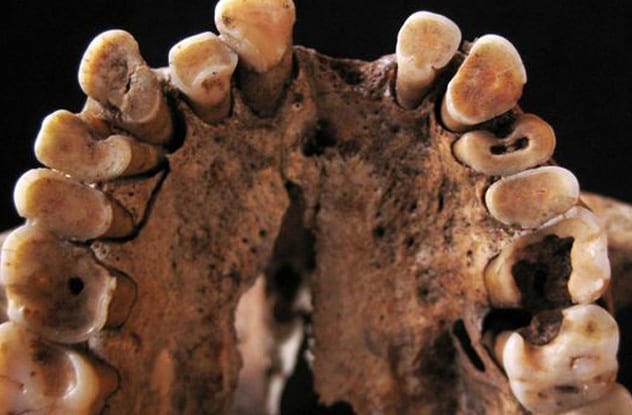 Changes in our diet has affected tooth decay rate significantly. Refined sugars and starchy food has elevated the overall incidence of tooth decay and encouraged a specific pattern of tooth disease and tooth loss. Starch makes our teeth more vulnerable to dental disease, so societies that rely on cereal consumption diet present a higher rate of tooth decay.

The difference in tooth decay rates between ancient hunter-gatherers and farmers is so significant that some archaeologists and anthropologists use statistical analysis of tooth decay and tooth loss pattern to distinguish between prehistoric hunters and farmers. Human adults who died around 30,000 BC had an average of 2.2 teeth missing at the time of death; in 6500 BC, 3.5; in the Roman world, 6.6. The lesson is clear, the fierce Stone Age hunters had a smile more beautiful compared to the civilized Romans. 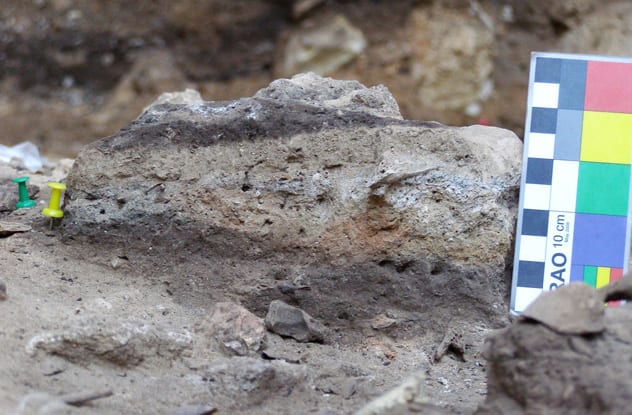 Some organic traces survive after they have passed through our alimentary tract. The brave specialist who digs into the secrets held by ancient poo is sometimes referred to as an analyst of desiccated peleofecal matter.

Human feces has specific chemical markers that distinguish it from animal feces, and it can show a wide variety of food remains: pollen particles, plant fibers, seeds, bone fragments, egg traces, nuts, mollusks particles, and in some cases even insects. Animal hairs can be found buried in the feces, and they can be analyzed to determine the species. Traces of fecal material can also be retrieved by adventurous researchers who dare to access cesspits, latrines, and sewers. 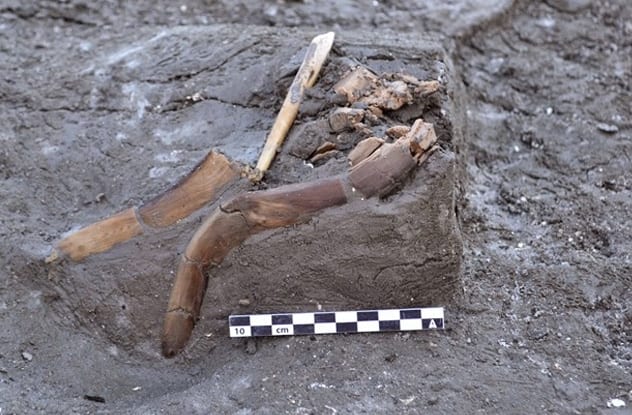 Food procurement and processing is normally assisted with tools. Evidence of fishing, for example, comes in the form of hooks, fish spears, fish traps, and nets. Stone tools used for butchering animals display a specific microscopic wear pattern, and this evidence can be cross referenced with animal bones assemblages found at the site.

Evidence of hunting can be found not only by studying specific artifacts like bows and arrows but also by identifying arrowheads and other traces of hunting equipment embedded on animal bones. Evidence of cereal farming can be found in the presence of stone grinders, sickles, and pottery, which in some cases can have microscopic traces of foodstuff. 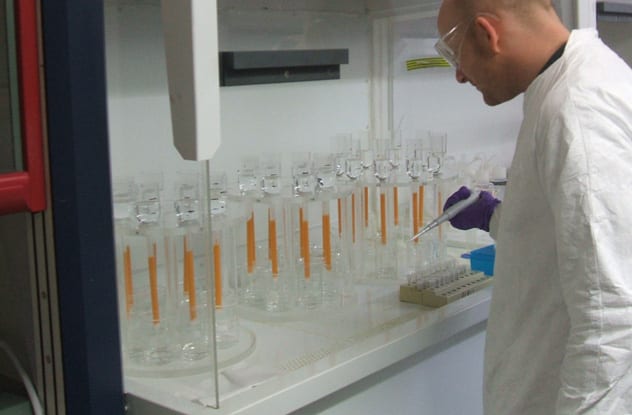 We are what we eat. At least this holds true for isotopic methods, which rely on chemical traces that the food we eat leaves in our bodies. One of these techniques reads the ratio of nitrogen isotopes found in bone collagen.

Interestingly enough, nursing babies tend to display the highest nitrogen-15 to nitrogen-14 ratio, since they are technically preying on their mothers and are therefore on the very top of the food chain. 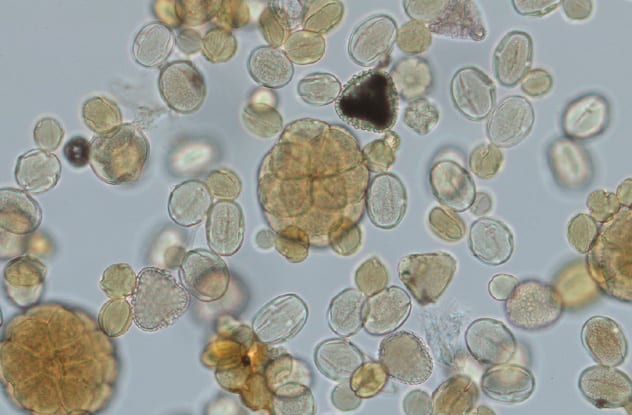 Phytoliths are minute botanical particles specific to certain plant species and may come from the flower, stem, or root. These particles can be recovered from sediments, pottery fragments, the surface of human teeth, or attached to stone tool edges. Phytoliths can identify specific botanical species linked to food consumption and differentiate between wild and domestic plant species.

Pollen grain particles are highly resistant and can be recovered from sediments, human feces, and teeth. If an archaeological site displays evidence of different levels of occupation, pollen particles coming from different phases of occupation can reveal changes on plant exploitation strategies during a given period of time. 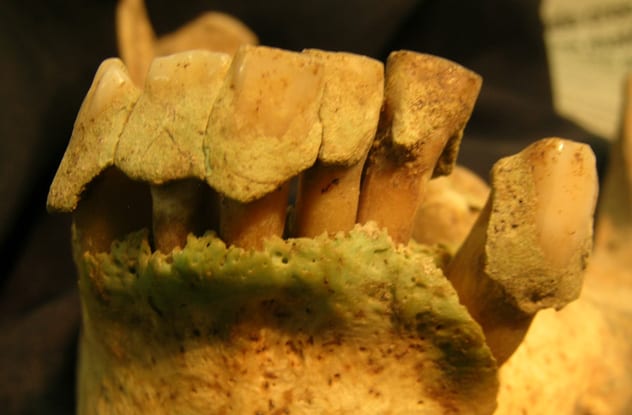 Tartar can be a truly informative source of past diets. As it builds up on our teeth, traces of food get trapped in it. Dentist who scrape tartar are a recent privilege, so our ancestors had a lot of tartar on their teeth. Tartar is especially informative on the plant species consumed, since pollen grains survive a long time. Microscopic fragments of fossilized plant species and bone fragment particles can also be found buried in the tartar.

One of the unique features of tartar is that it can act as a food biography: Traces from the early stages of life will be found in bottom and inner parts, while the upper and outer tartar layers hold evidence of food consumed during late stages. Although scientists are still perfecting this technique, we have examples of remarkably well-preserved food evidence contained in tartar coming from two-million-year-old hominids. 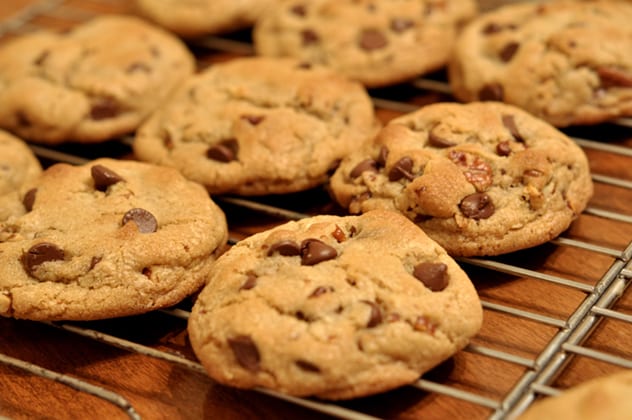 Now that we have ancient diets covered, how about some more quirky lists from modern times?