Henchmen are a curious lot. Neither totally in control, nor completely without their own means, henchmen come in all shapes and sizes. Although there’s innumerable bad guys throughout modern cinema, here are 10 that really made audiences think twice about that brutal-looking personality behind the mastermind. James Bond henchmen are exempt from this list as that would be too easy. Please enjoy. 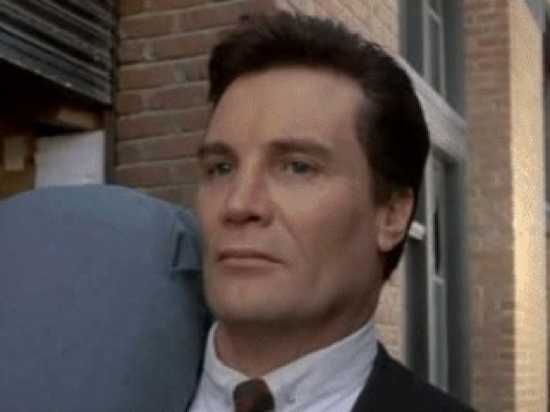 Mute, efficient and deadly, Mr. Igoe leaves much (and occasionally nothing) to the imagination. What must his resume read like? The only reliable piece of info we get about him in the 1987 sci-fi comedy is that he has a prosthetic hand with a variety of attachments, that he apparently enjoys listening to rock & roll, and that he knows how to handle himself in gun-related situations. Played by Vernon Wells (as only Vernon Wells can play him), Mr. Igoe makes the list for his sheer tenacity in getting the job done – not that Martin Short is much of an adversary, but c’mon. 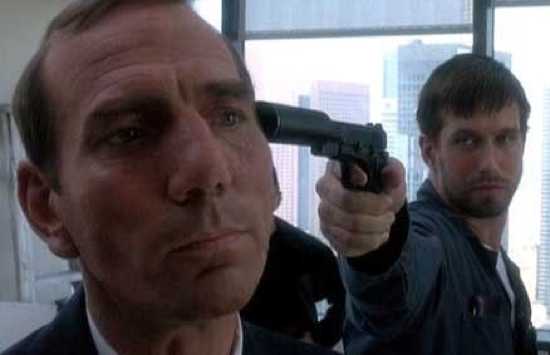 Although this list is concerned with “dangerous” individuals, everyone can agree that danger can take on many forms. That said – a scheming, erudite master of manipulation like Kobayashi (or is it all just Keyser Soze) cannot be ignored. Regardless of what actually happened in the backstory, it’s at least the presentation of the criminal mastermind’s lawyer that makes for good henchman devilry. Here’s a chess master who, even if it weren’t for his boss’s influence, we can surmise has all the pieces figured out. 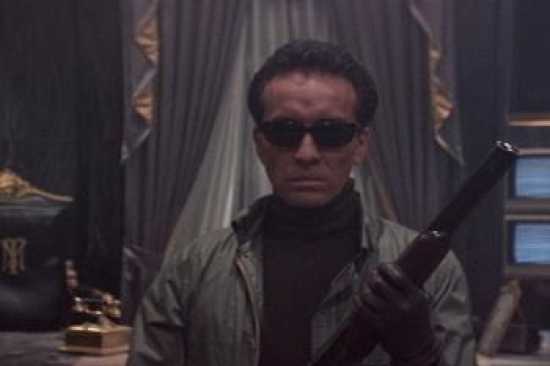 Who is this man? He killed Omar Suarez at the behest of Sosa, blasted Nick the Pig in the back of the head, and, most impressively, tore through Tony Montana with a double-barreled shotgun. Clearly, the world was not his. Known only as “the skull,” this Bolivian assassin is one of the more brutal depictions of a cartel henchman, though one gets the impression that he takes no satisfaction in his job and that (if he spoke) he might tell us that it’s all merely business. 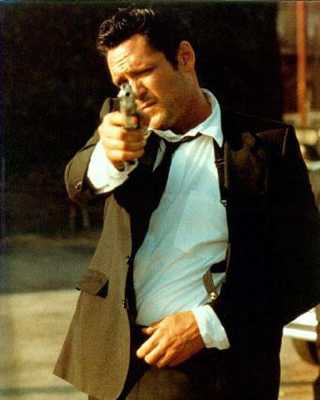 Michael Madsen has been a cop, a gangster, a bank robber, an assassin, a government agent, a henchman and the stepfather of the kid from Free Willy. Good or bad, his most notable roles are those in which he portrays a casual indifference to the well-being of others, while simultaneously portraying a twisted sense of poetic philosophy. Tying for the #7 spot, I give you Michael Madsen. Under the pseudonym of “Mr. Blonde” in Reservoir Dogs, Madsen portrays a twisted and depraved personality that (how surprising!) psychologists use to demonstrate the tenets of psychopathy. Though not technically a henchman – and more of a member of an ensemble – Mr. Blonde is still the vicious pack dog of Joe Cabot, played by Lawrence Tierney. Had he been Joe’s solo Dog, few could argue against him being Joe’s most vicious henchman. As for the tying role, Madsen does a delectable job as the titular character’s beer-swilling hillbilly brother, Bud. Madsen plays Bud as something akin to the Billy Carter to David Carradine’s Jimmy, with the exception that he is a deadly assassin who is the only person to get the drop on The Bride. Like all the other assassins under Bill’s tutelage, Bud is, of course, not a lone gun, but rather a henchman among henchman. However, just like in Reservoir Dogs, the rift between the group allows for the exception. It’s proof that henchmen have, and will, eventually go their own ways. And Michael Madsen is proof that a henchman can be just as likable as he is deadly. 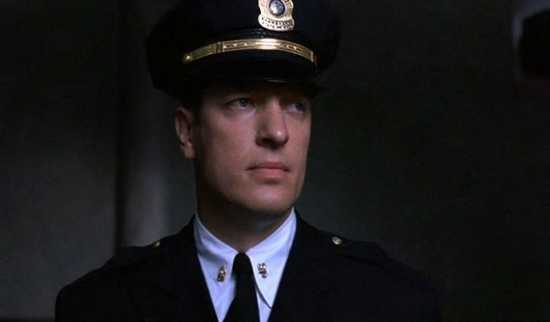 As one of the most popular and successful movies ever made, it’s likely a shared understanding that Captain Hadley is one of the more brutal depictions of “justice” in a prison movie. Just look at this guy – he looks like a cross between Boris Karloff and Skeletor. Hadley’s sadistic streak probably has less to do with his job responsibilities, and more to do with his enjoyment of hurting lesser forms of life. Some have defended his actions for crippling Boggs as a favor to Andy Dufrense, but he was almost certainly doing this on orders of Warden Norton so that Andy could continue his embezzlement operation within the walls of Shawshank, unabated. What makes Hadley particularly evil as a henchman is the irony of his profession. As a corrections officer, he is supposed to be an operator of justice. No such luck. Whatever else makes him tick, Captain Hadley is proof positive that you can’t let the uniform fool you! 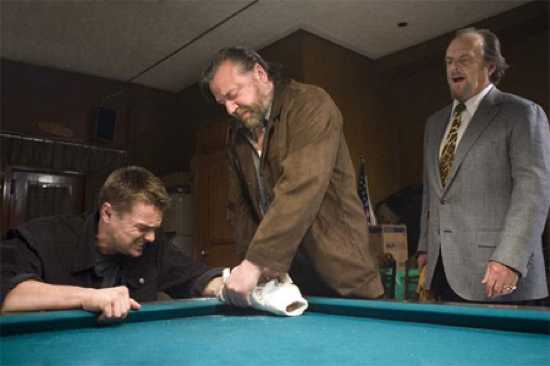 Do you know me? That’s right, it’s Mr. French, Jack Nicholson’s bloated and brutal right hand man in Martin Scorcese’s Irish mobster classic. Mr. French is reliable. In fact, he’s one in a million. Like a loyal dog, French remains with his boss to the bloody end, and, oh, is it ever bloody. As played by Ray Winstone, Mr. French is easily the best representation of your standard henchman, there for the bidding of thy master. Of course, with the added benefit of being a rather likable tough guy, Mr. French is #5 for the fact that he’s really right in between the evil and the truly evil. Now, whaddya drinking? 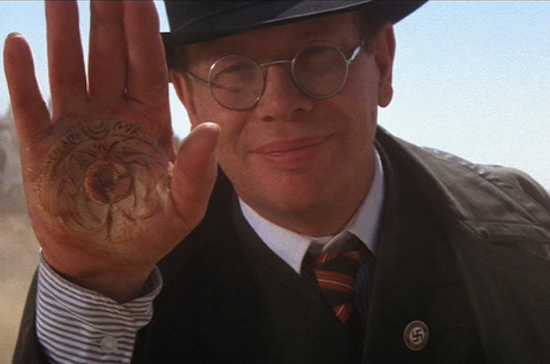 Evil Nazi Scum! At least one of them had to make the list! Ronald Lacey’s performance as Toht, in Raiders of the Lost Ark, is the stuff of pure cinematic evil. Dressed entirely in black, adorned with a National Socialist armband, and having the otherwise deceptive presentation of a four-eyed geek, Toht is clearly no one to be underestimated. Though he relies on henchmen of his own to exact physical force, it’s Toht’s mind that makes him the most exacting and deadly of henchmen, especially to the likes of Colonel Dietrich or the dirty Frenchman, Belloq. Having no qualms about throwing a woman to her death in a snake-infested pit, or ordering one of his thugs to shoot another that has failed to live up to his expectations, Toht makes us consider exactly what lengths an evil personality may be willing to go to. It’s thanks to Toht, that there was a time when people didn’t look at coat hangers the same way. 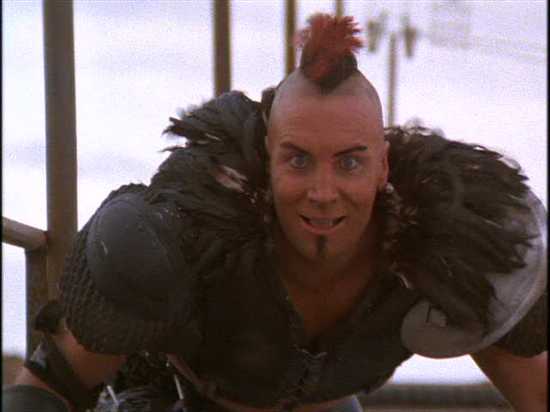 Yup, Vernon Wells is so effectively creepy that he deserves two spots on this list, of which his performance of “Wez” is undoubtedly the more unnerving. Apparently content with the post-apocalyptic carnage that exists all around him, Wez is the happy-to-oblige first lieutenant of the Lord Hummungus, the disfigured and maniacal ruler of an Australian wasteland. If not for the sheer size of Hummungus (for his name is no hyperbole), there seems to be a suggestion that Wez would happily usurp his leader. Alas, any mutiny Wez may or may not be contemplating is put on hold with the arrival of Mad Max Rockatansky, played by Mel Gibson. Aside from the role of reluctant hero, Max’s function in George Miller’s epic movie is to drive the rooster-feathered Wez into fits of furious and unyielding rage. So replete is Wez’s desire to utterly destroy Max, that there is palpable tension between the two throughout the entire film – despite the fact that they don’t even come within arm’s reach of one another for 99% of it! Incredible! 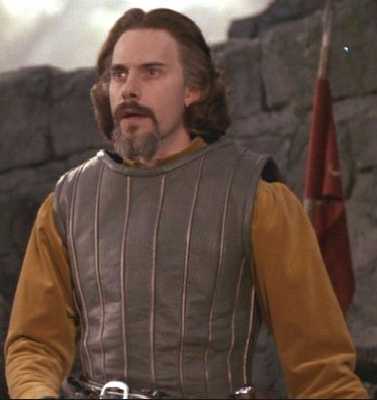 Before you disagree, please consider: He murdered a man right in front of his young son. He permanently scarred that same boy and left him in the depths of despair and humiliation. He happily taxes the local villagers for everything they’ve got. He plays something like a perverted consigliere to Prince Humperdinck, himself a greedy and arrogant snob. Oh, and if all this isn’t enough, Count Rugen enacts a plan to viciously torture (and eventually kill) Wesley, with his torture “machine” that looks like a cross between a Dutch windmill and a Willy Wonka candy machine prototype. Face it, the guy is pure evil, and evil is never more pure than when it is under the guise of a wise and noble member of society. There is nothing to suggest that, at any point in Rugen’s life, he wanted to be anything other than evil. Do you know someone else who tortures a person and then asks them: “be honest, how do you feel?”

Get out of this man’s way. He’s a dangerous, calculating psychopath who’s good with almost any weapon and not intimidated by the idea of being surrounded by a tactically well-equipped major metropolitan police force. Hired for a high-stakes robbery, Karl quickly devolves into a man looking to avenge his brother’s untimely death, and he’s essentially unstoppable. Those familiar with the character know that he is set-off by three simple words: “Ho-Ho-Ho…” What follows is a maniacal chase through the various floors, elevators and conduits of the Nakatomi Building. Heralded as the greatest action film ever made, the characterization of Karl Vreski, by Alexander Godunov, is as classic a depiction of maniacal search-and-destroy as Ahab’s pursuit of his great white whale. That’s right, I just compared a 1988 action film to Moby Dick, bitches! Bottom line – even someone as cool and quick as Officer John McClane needs to watch his step (no pun intended) around the likes of Karl – a truly formidable enemy, who isn’t even the criminal Mastermind!