Humans have proudly achieved more through sheer intellect and manipulation of their environment than any of their contemporaries. We can grow artificial tissues and use lasers in surgery. However, many of the breakthroughs of which we are so proud are only known or available to the upper echelons of our society, and the lifestyles of others remain completely unaffected. It is difficult to write any comprehensive list, but nevertheless here are ten (the first list of two) breakthroughs which literally changed the lives of close to every human on the planet. Each one is important in its own right, so they are in order of chronology instead of significance (the second list will continue in time order), but as many developed concurrently or have at best inexact dates; this order is only very approximate, and several have been instead better grouped by topic.

10
Logical Thought
millions of years ago Logical thought, also called scientific thought, is the process of reasoning and testing in order to deduce the truth in any situation so that it may be more widely applied. For example, noting that every time anyone eats a certain berry they grow sick and die leads to the conclusion that the berry is likely poisonous. However, noting that when one ate a certain fruit the rain began to fall should not lead to a conclusion of ‘eating fruit makes it rain’ because the process has not been repeated or tested to confirm the link. A large number of animals are able to make such connections without testing them logically. Many superstitions are a result of illogical connections, where a coincidence that occurs once or twice is wrongfully interpreted. Several ancient civilizations even developed priest-kings who interpreted various signs according to increasingly complex superstitions and often produced bizarre or destructive behaviors. The ability to think with increasing logic allowed humans to make important links with far-reaching consequences in every field of human endeavor. Every advance is thanks to our capacity to think logically and search for connections so that we may gradually build a better world for ourselves. 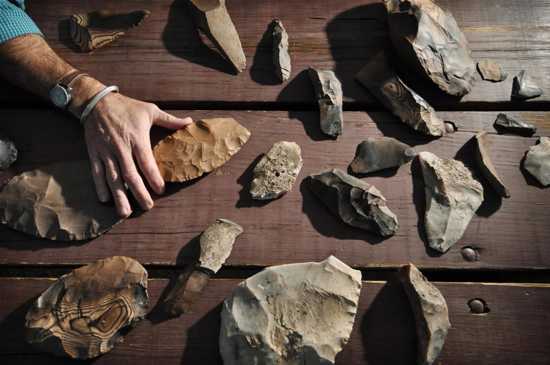 Apes, and indeed many other animals, have been making tools for millions of years. However, very few ever venture to refashion stones. Tools made of leaves and wood tend to rot or wear away, but stone tools are much more permanent, and therefore lend themselves to better and better shaping towards their purpose over time. A spearhead, after a hunt, can be retrieved and refined so that the next hunt is easier. Hunting suddenly became much more successful. Stone tools and the need for more refined tool making require a greater intellect and imagination than that of most animals, and so the humans with better brains made better tools, enjoyed better lives, and generally lived longer, allowing them time to have more offspring. In shaping stone tools we shaped our own evolution. 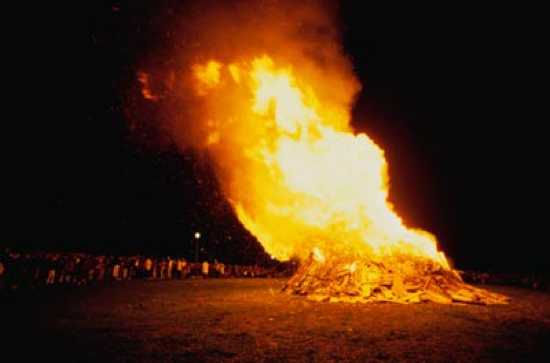 Although there are records of chimpanzees, our closest relatives, performing ritualistic fire dances and even wielding flaming branches, humans are the only verified creature to have learnt the art of creating a flame. Fire provides comfort and warmth, but much more importantly, it allows us to cook meat. Our ancestors found that cooked meat was easier and safer to eat, and they rapidly adapted to a diet with more meat in it. Their powerful vegetation-chewing jaws shrank and their brains grew as they hunted more game, an act requiring a relatively high amount of intellect for the planning and communication involved. Fire changed our diets, which subsequently changed our digestive tracts, our jaws and teeth, and was one of the biggest factors in the development of near-modern intelligence. Stone tools may have started us down the road to larger brains, but fire massively accelerated the process. In a relatively short space of time after fire was mastered, the brain size of our ancestors more than doubled. Rather than live nomadically and follow herds of game around, some groups of early people found they could keep groups of less aggressive creatures confined to a set area and alleviate themselves of the need to constantly travel. This allowed more permanent settlements to be formed, and the people had more free time due to not having to travel so often. Written language became much more useful in keeping track of things, and the extra time gave them the window to develop it. Domestication was applied to plants as well, and basic husbandry began. Breeding became a carefully controlled process. Weaving and other arts could be refined, and trading for goods greatly increased. Instead of having only a few occupations as in a hunter-gatherer society, there were now hundreds of specialist jobs, ranging from metal workers to breeders to primitive vets. No-one was a generalist anymore. Where previously the world population had been only a few million, farming allowed a number approaching the billions. Farming had an internal affect as well: the large stores of food which resulted from farming gave rise to larger and larger numbers of disease-carrying vermin, which in turn made people develop stronger immune systems. 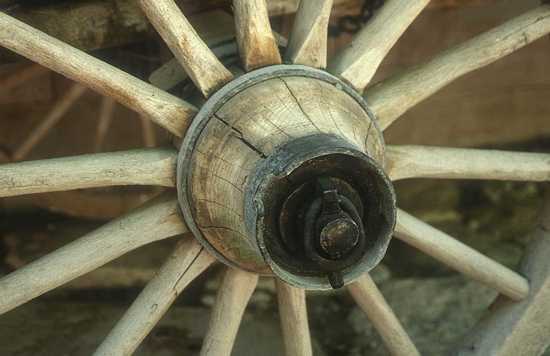 Around six thousand years ago, the wheel began to be used in various parts of the world. Our fascination with it was slow at first, as the lack of smooth roads limited its wider uses. Gradually it took hold and settlements would flatten paths so that wagons could pass, greatly increasing the efficiency of a number of human endeavors. The wheel went on to give birth to the water wheel and the windmill, which gave us power and dramatically reduced the amount of effort needed in farming and food production. Vehicles and chariots began to develop, changing the fate of empires through warfare and travel. Its other offspring are the spinning wheel, enabling the development of various kinds of refined cloth making, potter’s wheels, used to make higher quality and refined pottery, cogs and pulleys, allowing all manner of mechanics to develop, the astrolabe, a device used by great minds to study the movements of the heavens, the propeller, used much later on planes and boats as a means of propulsion, and the steam engine, another great breakthrough discussed below. 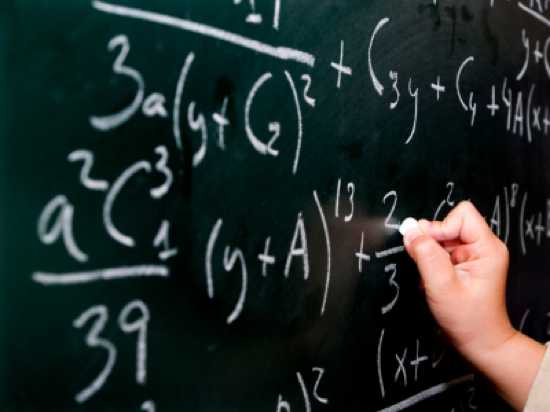 Mathematics had a slow beginning, but became highly needed once agriculture developed. Dealing with trading goods and keeping track of larger numbers of animals necessitated counting and manipulation of numbers. As farming grew, people needed not only to count into the hundreds or even thousands, but they also had to be able to add and subtract those numbers. Mathematics allowed far more complex trading, which had up until then been dependent largely upon haggling, and introduced the notion of currency. This revolutionized business and gave rise to economics and true commerce. Mathematics also allowed engineering and astronomy to become independent fields in their own right, and together these formed the basis of much of modern science and technology. More recently, the introduction of Arabic numerals and the place-value system made higher mathematics universally accessible. Up until then, years at university were required before something as simple as multiplication could be understood. Probably the first metal to be widely used was gold. This is because, unlike many other metals, it naturally occurs in a fairly pure form and is soft enough to be worked by stone tools. Eventually, ancient people realized that heat from fire could be used to extract other quite pure metals from ores (rocks containing small amounts of metal). Copper and tin were extracted and prized for their superior hardness, but were still too soft for many uses until they were combined, probably by accident, and formed bronze, an alloy that is much harder and more useful. Bronze weapons and tools easily outperformed all that had come before them. Farming tools, chariots, armor, and scientific instruments became unrecognizably better. Iron took much longer to be mastered, due to its higher melting point, but when it was, it was found to be an even better metal. People noticed that iron that had come into contact with organic matter formed a near-perfect metal – steel. Steel is more resistant to rust, is easier to weld, and today is cheaply mass-produced and used around the world. 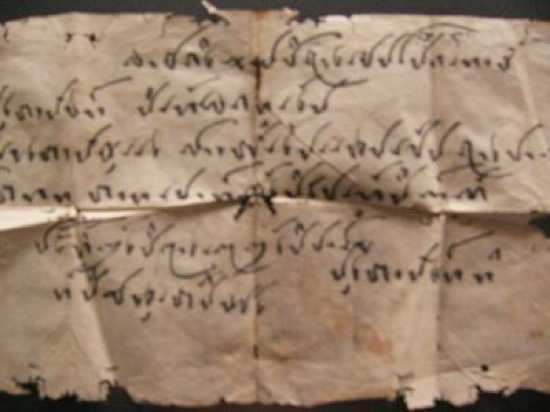 The wide availability of paper was a major factor in the push towards universal literacy. Before paper was easily available, people could generally only write in the dirt or sand, which was impractical for most uses and therefore all but the most intelligent people were not disadvantaged by remaining illiterate. Universal literacy meant writing needed to be simple and efficient, and so complex hieroglyphs became refined and less cumbersome. This new art of easy writing was so persuasive that it passed even to people who had no paper and no opportunity to develop this smooth writing on their own. Widespread literacy and the subsequently developed writing was incredibly useful at storing information and reliably recording knowledge too vast for any one person to be relied upon to remember it all perfectly. The amount of knowledge capable of being maintained by humanity leapt forward. Literacy made communication at distance much more viable, and it was the first small step towards a unified global community. 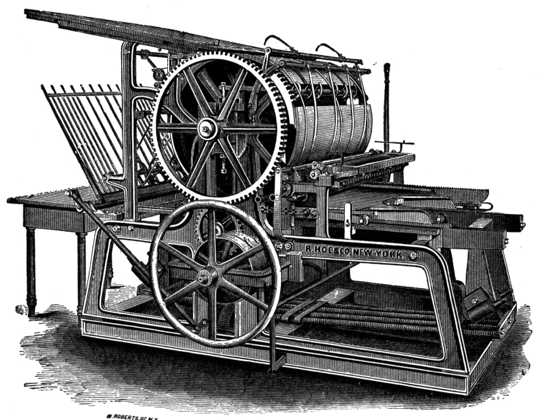 Paper and writing were useful in recording valuable information, but books needed to be painstakingly written out one by one, and therefore were few in number and devoted only to the most important topics. The printing press allowed entire books to be printed in minutes, making knowledge much more widely available and enabling books to encompass a much broader range of subjects. The total amount and range of knowledge capable of being stored by humanity increased almost exponentially, and the availability of books and knowledge made education improve and become more widespread. The idea that all children should be academically educated is today almost omnipresent. This was a great milestone in the path towards increasing the average intelligence of the general populace. 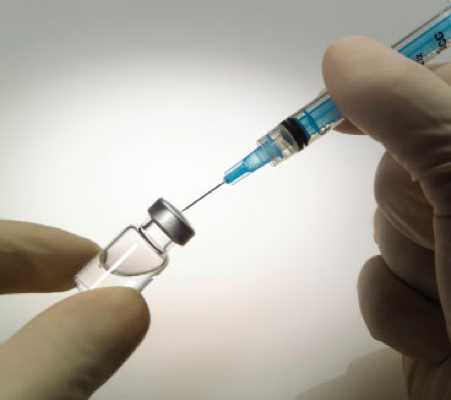 Although used by a number of ancient cultures, vaccination became properly understood in the eighteenth century and was carried out on a widespread scale only last century. Most famously, the terrible disease smallpox has been completely extinguished thanks to vaccination. Smallpox was fatal for nearly half of infected adults, and over 80% of infected children. It killed millions of people every year for millennia. A vaccine, initially developed from the milder yet related disease cowpox, was used to produce immunity, and when enough people were vaccinated by 1977, the disease had no-one left to infect and died out. A myriad of other unpleasant and often deadly diseases which plagued our ancestors are now easily avoided thanks to vaccinations at birth and in childhood. Even those who are not vaccinated often benefit as the disease is less likely to spread if enough others are vaccinated. Billions of lives have been saved and the entire human population have better lives thanks to vaccination.