Whenever people think of Antarctica, the images of stunning icebergs, glaciers, and plenty of snow likely come to their minds. Additionally, whenever they imagine Antarctic life, it probably includes pictures of penguins, seals, skuas, and the krill that are found in the Southern Ocean.

However, many other fascinating discoveries have been made in Antarctica over the decades. Scientists are slowly unraveling one mystery at a time in a land that is full of extraordinary creatures. 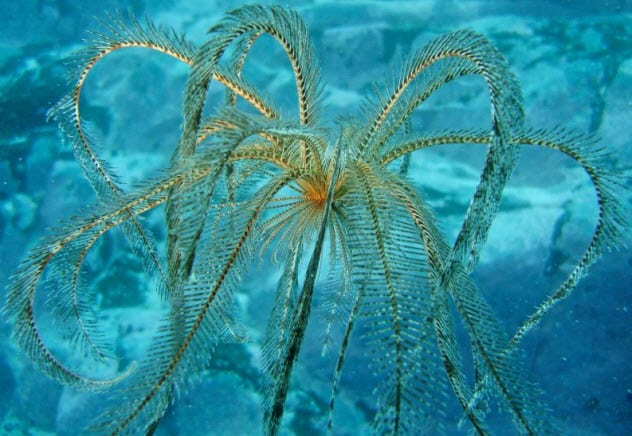 This Antarctic feather star (aka Promachocrinus kerguelensis) is part of the Crinoid family. These animals live on the bottom of the Southern Ocean near the coast of the continent. This particular feather star prefers to live in cold waters. However, that is not the only trait that makes this creature different from many other types of feather stars.

Promachocrinus kerguelensis appears to be denser and more feathery than it really is. The creature’s 20 arms filter food from the water and help it to swim when it wants to settle in another area. They swim quite gracefully because they are well-coordinated whenever they are moving.[1] 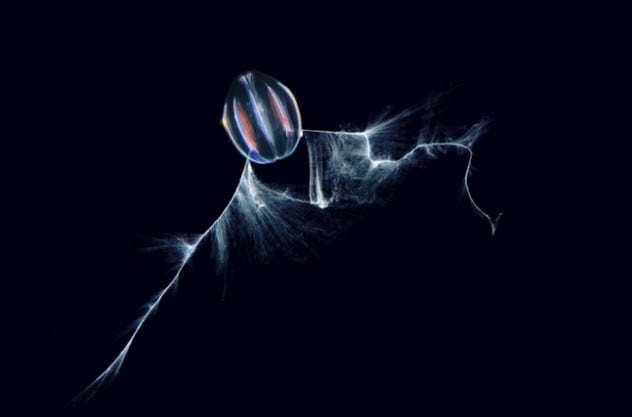 Comb jellies (aka ctenophores) are soft, transparent animals that use eight plates or comb rows of cilia to paddle through the waters off the coast of Antarctica. They are the largest creature known to swim this way. Comb jellies come in different shapes and sizes. Some are bell-shaped, while others are spherical.

Whenever light strikes their paddles, they emit different colors, which give them a unique appearance. They are also bioluminescent, which produces a blue-green light. Comb jellies live mostly on the ocean surface, where it is more acidic and warmer due to higher levels of carbon dioxide, and they thrive on that.

Like jellyfish, ctenophores are predators. Instead of stinging cells, however, comb jellies use their sticky secretions to catch small animals.[2] Fair warning: Don’t pick them up no matter how appealing they look. You’ll regret it. 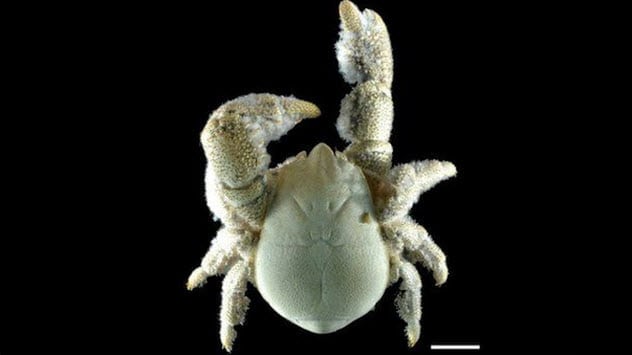 The Hoff crab, a hairy creature that lives on the seafloor, gets its moniker from resembling David Hasselhoff’s hairy chest. It is easy to wonder what Hasselhoff (the “Hoff”) thought about that. Supposedly, he was quite honored that a creature was nicknamed after his hairy chest. Later, the crab was given the scientific name of Kiwa tyleri.

The animal was found on East Scotia Ridge in the Southern Ocean, where the waters are about 0 degrees Celsius (32 °F). That is too cold for the crab to handle, so it huddles around so-called hydrothermal vents on the ocean floor. The volcanic rock systems heat up the area.[3]

The Hoff crab has a hairy appearance because the animal is covered in bacteria. The crab uses its comblike mouthparts to scrape off the bacteria and eat them for dinner (or breakfast or lunch). 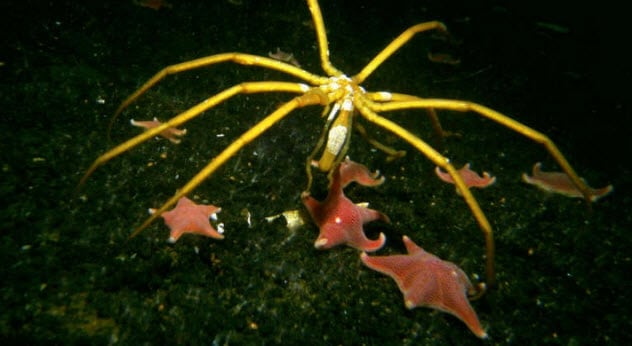 If you are an arachnophobe, you may want to skip this part because one of the creatures living in the frigid Antarctic waters is the giant sea spider, which would be probably your worst nightmare. Then again, they aren’t really spiders. Despite their name and appearance, they’re marine arthropods.

These creatures can be as large as 35 centimeters (14 in) in diameter. Although it is unknown why giant sea spiders are so large, the phenomenon is called “polar gigantism.” In polar environments, many species have evolved to be much larger than their counterparts in temperate climates.[4]

According to one theory, these sea spiders are gigantic because the frigid temperatures in their environment have slowed down their metabolisms so much that they need little oxygen to survive. Due to an oversupply of oxygen in the area, scientists believe that the sea spiders evolved larger body sizes over time.

Giant sea spiders can also be found in Arctic waters. 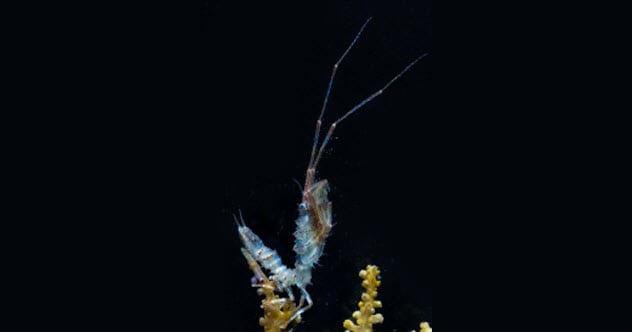 A poorly known species, Antarcturus sp. lives deep in the Antarctic waters. In fact, the Southern Ocean is filled with these things. They are isopods, an order of crustaceans, and belong to the Antarcturidae family.

The creature’s limbs provide it with protection from predators. Antarcturus sp. lives on sponges and coral branches. When it wants food, it simply extends its long frontal appendages and snags some tasty planktonic prey.[5] 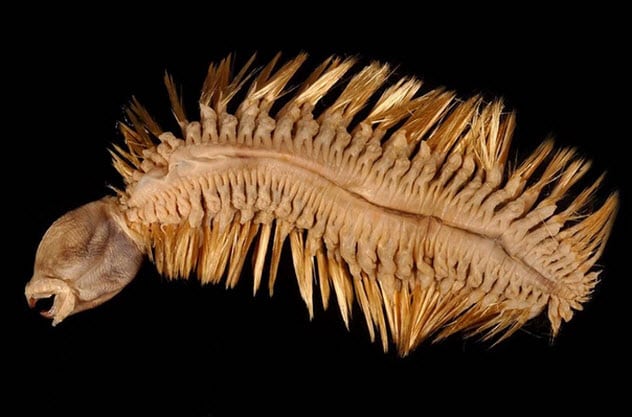 Other species that live off the coast of Antarctica may also be your worst nightmare—such as the bizarre marine worm, known as the Antarctic scale worm, that is found on the seafloor of the Southern Ocean. It is quite frightening to look at.

The Antarctic scale worm (aka Eulagisca gigantea) is around 20 centimeters (8 in) long and 10 centimeters (4 in) wide. These flat, short worms are in the Polynoidae family. The scales that cover their bodies are called elytra.[6]

Strangely, what looks like the worm’s head is actually a retractable mouthpart that can be turned inside out and folded into the creature’s body. When it wants to chow down, it simply unrolls its long proboscis and rips its prey to shreds. 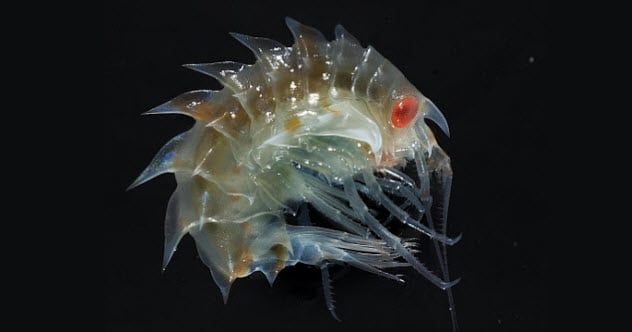 The sandhopper is an amphipod, which is a crustacean. They live in the frigid Antarctic waters but are land creatures, too. Like many of the other animals that live in the polar regions, they are incredibly large. The sandhopper has earned that name because it jumps far if disturbed. This animal leaps by first tucking in its tail and then flipping it out.[7]

However, they are less creepy than some of the other creatures that live in this region. If you enjoy eating seafood such as lobster, crab, and shrimp, then there is no reason for sandhoppers to scare you. All these animals are related. 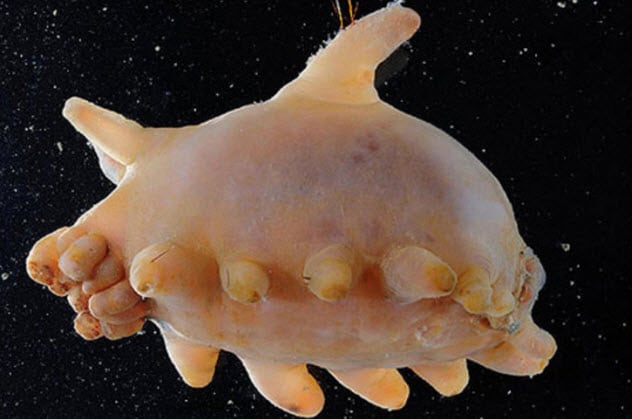 Sea pigs (aka sea cucumbers) are around 10–15 centimeters (4–6 in) long. They are quite abundant off the coast of Antarctica and tend to stick together in large gatherings. However, it is unlikely that you will see any because they live in the deepest part of the Southern Ocean.

They serve an important purpose in the water. As with earthworms on land, sea pigs are needed to eat scum, mud, and decaying plant matter on the ocean floor. It is unknown how they mate, and their life span is also a mystery.

By the way, don’t be fooled by the fact that they are pigs in the sea. They taste nothing like bacon, but they are full of toxins.[8] 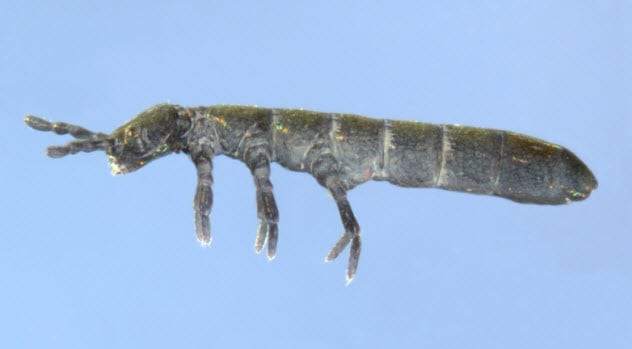 Springtails are another interesting Antarctic creature. They are hexapods and have similarities to insects. They are also known as “the elephants of Antarctica” because they are the largest exclusively land animal there. Usually, they are less than 1 millimeter (0.04 in) long. (Of course, there are bigger animals—such as penguins—that live on land, but they also live at times in the water.)

Unlike insects, springtails have internal mouth organs. But they look like earwigs. Their diet consists of fungus and bacteria.[9]

Their skill for survival in such a harsh land is that they can slow their metabolism to conserve energy. They are also able to produce glycerol which reduces their freezing point. However, if the conditions are too harsh, they will die. Their superpowers can only take them so far. 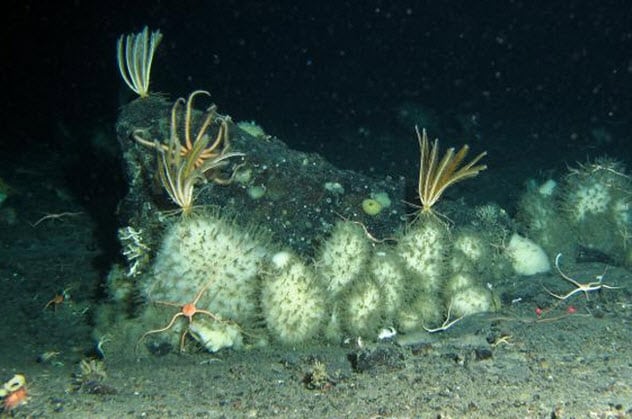 Antarctic glass sponges don’t look like the type of sponges that are used to clean dishes, and they are not made of glass. However, their skeletons are made of silica, which is a component of glass.

Their diet consists of organic debris, and they are not exactly picky eaters. They will devour whatever the ocean serves them. It was once believed that these glass sponges didn’t grow at all. However, scientists now know that these creatures do indeed grow quickly. This discovery was made by marine biologists in 2013.[10]

In fact, there has been a glass sponge boom since ice shelves have been disappearing. This has changed the conditions on the continent and in the Southern Ocean. Scientists are working to find the cause of this for two reasons: They want to understand sponge ecology better, and these sea animals have the potential to store carbon.

This is a huge motivating factor for scientists to unravel the mystery behind the growth of glass sponges. This may help researchers to understand some of the reasons behind climate change, which we all know is important to find out.

Miriam Slozberg is a Canadian mom, blogger, astrologer, ghostwriter, and freelance writer who has an eccentric sense of humor and way of thinking.