Horror is an odd genre of film. It’s a staple of cinema, but at the same time, it’s arguably the stalest and most worn-out genre. Think back to the last great horror film that was full of surprises, genuine tension, and actual scares. Not many come to mind. Instead, what’s grown popular is the lampooning of horror. Noticing this, I’ve listed the ten best spoofs (old and new) of the horror genre. I should say, though, that I’m a huge horror fan. I may have some negative things to say in this article, but that’s only because I wish the best for one of my favorite genres. Enjoy. 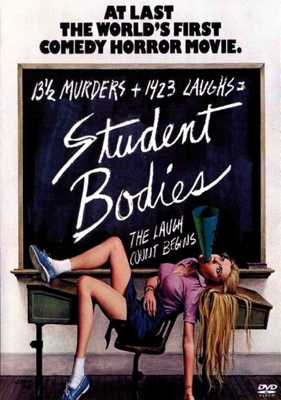 The first actual, full-on spoof of the stale genre was 1981’s Student Bodies. A very strange film, it centers around ‘The Breather’ (called so because of his heavy breathing), a serial killer targeting students over the phone. While spoofing the various cliches and tropes found in Friday the 13th, Prom Night and Halloween, the film also delivered several very strange but original moments, including an infamous janitor named Stick and a body count meter in the bottom corner. Ending with several twists stacked onto each other, the film is beloved as a cult hit and ushered in the age of ‘self-realization,’ with those horror franchises named before accepting their goofiness and ham, briefly giving them a shot to the heart. 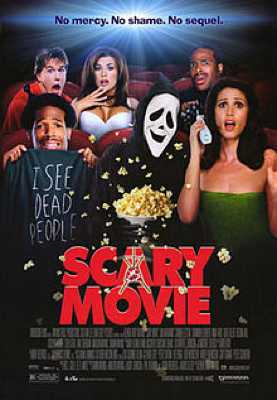 Much like Student Bodies, 2000’s Scary Movie was a response to the stagnate horror genre, taking to town many films, the most prominent being Scream and I know What You Did Last Summer, with many potshots also had at various horror films like The Sixth Sense and The Blair Witch Project. Despite being released almost 20 years later than Student Bodies, a lot of the things it parodies (slutty cheerleaders, ignorant locals, the hackneyed twist ending) were true in the ’70s and ’80s, further showing just how predictable the genre can be. The film is mainly a take on Scream (which was actually satire too), with a parody of the killer from that film, Ghostface, terrorizing a small town and its youth. It also launched it’s own franchise, with a fifth installment coming some time in 2013. 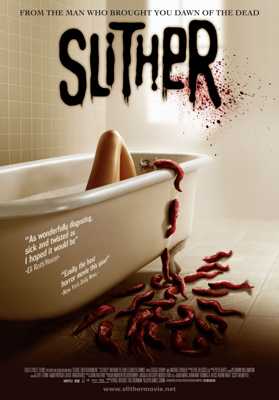 While not as obvious a spoof as the last two films, James Gunn’s Slither is still satire, albeit light, as it’s also a tribute. What it’s both mocking and celebrating are the gory, splatstick B-movies of the ’80s, like Class of Nuke ‘Em High and Killer Klowns from Outer Space. Films like those inspired Gunn to work in Hollywood, and he pays them respect while also tongue-in-cheek making fun of the small, backwoods town and cliches, including the town’s many characters. Largely similar to Night of the Creeps, another B-movie, the film’s about a local southern place in the middle of nowhere targeted by aliens who wish to enslave everybody. Filled with over the top gore and a mix of slapstick and legit horror, it’s become one of the newest editions in the cult film pantheon.

7
The Rise of Leslie Vernon 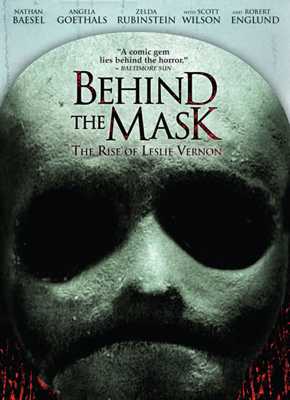 This low-budget, independent film is really only satire in its deconstruction of the tropes found in horror films. Largely, it’s more a love-letter to the Friday the 13th and Halloween franchises, with the main character, Leslie Vernon, being just like Jason Voorhees or Michael Myers. Filmed in the mockumentary style, this 2006 sleeper hit follows Vernon, who by day hires a film crew (much like Man Eats Dog) to explain the various whats and whys of being a psycho, ritualistic murderer, and who by night set ups those very rituals and scenarios, such as picking the virgin, getting her friends to go to the abandoned woods, etc., all so he can brutally murder them. Its tearing down of the stereotypes found in campy, scary movies is both smart and subtle, with a dosage of black humor. A sequel is currently being written. 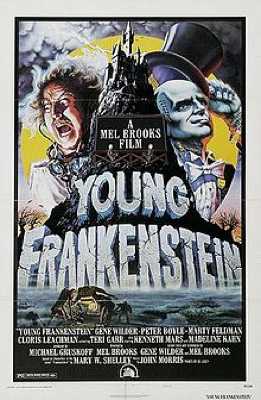 Mel Brooks, known for many hilarious satires, from the old west in Blazing Saddles to Broadway in The Producers, sets his eyes on the horror icon itself, Frankenstein’s monster, in 1974. It’s a complete reworking of the Frankenstein saga, only done in classic Brook’s fashion, with plenty of slapstick and meta-humor. Some of the humor is subtle (Igor’s hump switching locations), much of it is broad (‘Puttin’ On the Ritz’), but it’s all very funny and very smart, successfully paying tribute to the classic tale and also lampooning its many cliches. Brooks would later try to replicate this formula with Dracula: Dead and Loving It to less success. 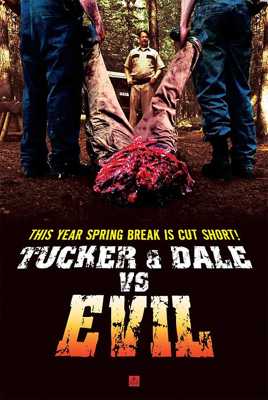 Released in 2010, this recent spoof targets the ‘back-woods murderous redneck’ trope, found in many films including Deliverance, The Hills Have Eyes, and The Texas Chainsaw Massacre. Unlike those films though, the main characters in this film are the rednecks, who aren’t murderous at all. Instead, they’re both incredibly nice, warm people but due to a series of misunderstandings and pure bad luck, are mistaken for those very stereotypes by a group of teenagers vacationing in an old cabin in the woods, who begin to attack the poor guys. It’s a complete reworking of the original cliche, and it works brilliantly, giving rednecks a rare, fair credit. 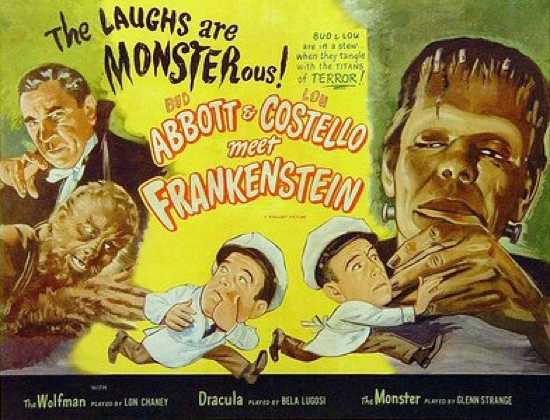 Another take on the Frankenstein tale, this one comes from the legendary comedy pair of Abbot and Costello, who were known for many kooky adventures. Despite the title, this is more of a ‘monster movie’ spoof than a specific Frankenstein spoof, with both Dracula and The Wolfman being included. In the film, the helpless duo end up unleashing Dracula and Frankenstein’s monster unto the world, and along the way come across the Wolfman too. Like their previous films, it’s zany and full of slapstick, but is still both funny and relevant. Like Young Frankenstein later, the many cliches of Frankenstein are poked fun at, only this time, two more monsters get the treatment. 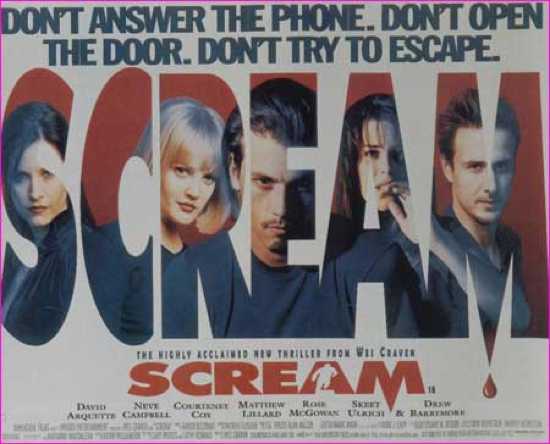 Directed by the master of horror himself, Wes Craven, Scream manages to be both a complete deconstruction of slasher films and at the same, a great horror movie. Instead of being goofy and silly like other parodies before it, it uses those tropes for it’s advantage, with the murderer of the film, Ghostface, terrorizing a group of students using the various rules of horror movies, like not having sex and not doing drugs. The film openly acknowledges the tropes associated with this type of film, which makes the film stronger and unique. Even the twist ending is fresh. Smart, humorous, and edgy, it was followed by three sequels.

2
Shaun of the Dead 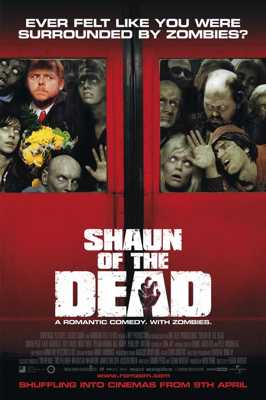 Zombies, a staple of horror since the very beginning, had managed to get through the years without a lot of mockery or grief. That changed in 2004 though, with Edgar Wright’s Shaun of the Dead, a hilarious rundown of zombie cliches and tropes. It’s centered around the titular Shaun, a workaholic with a fratboy best friend and a failed relationship, who’s thrust into the zombie apocalypse. Filled with as much heart as it has laughs, it’s become one of the most popular zombie films of all time, despite making fun of the entire idea throughout. It’s also part of Edgar Wrights ‘The Three Flavors Cornetto Trilogy,’ with Hot Fuzz (a parody of action films) and The World’s End (a parody of sci-fi).

1
Cabin in The Woods 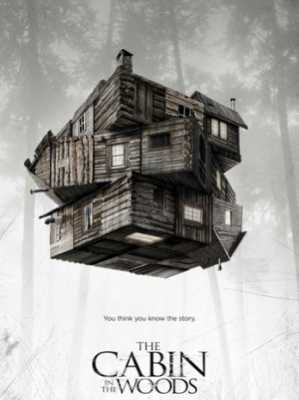 The most recent of these films (just released in April, 2012), The Cabin in the Woods is an ambitious, brave take on pretty much everything horror. A group of youths travel to an old, abandoned cabin in the middle of nowhere, and what follows is exactly what you would imagine: sex, drugs, and murder. The thing is though, (and this isn’t a spoiler, honest), it’s all being controlled by some organization. From drugging the kids so they become dumber to blocking all the exits, they make the teenagers their puppets. The film only gets weirder and crazier as it goes along though, but every cliche and stereotype and monster all get a turn at being spoofed. It’s violent, funny, sexy, and most of all, original. It’s exactly what the horror genre needed, and hopefully it inspires more creativity.