Disney has produced a number of fantastic and diabolic villains – Maleficent, the Evil Queen, Ursula, Jafar, Scar, Gaston, Pete, Hades, etc. The list goes on. But while there are many popular ones, some villains are often forgotten and are not as publicized as much as others. This list contains ten Disney villains who deserve some more attention and appreciation. Please note this list contains spoilers for the films that most of the villains are from. 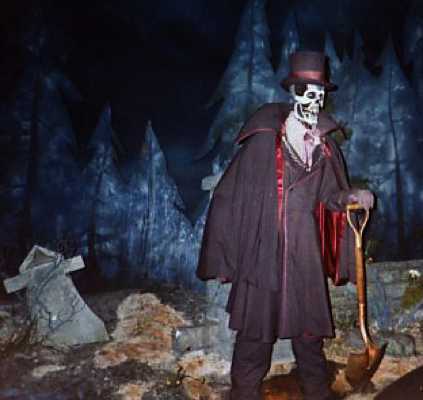 The only character on this list to originate from a Disneyland attraction, the Phantom is the villain of Disneyland Paris’ version of the Haunted Mansion, Phantom Manor. A mysterious spirit of malicious intent, the Phantom turned the Ravenswood Manor into his own ghostly retreat, inviting nine hundred and ninety eight others ghosts to live with him. He even hung the fiancé of bribe-to-be Melanie Ravenswood, who wandered into the manor in search of her lover until she died. It is speculated that the Phantom is actually Melanie’s father who returned from the grave to prevent his daughter from getting married and leaving the family home. The Phantom’s most distinct feature is his chilling laugh, performed by Vincent Price, who was meant to narrate the Phantom Manor’s spiel, but it was replaced with a French-narrated one. 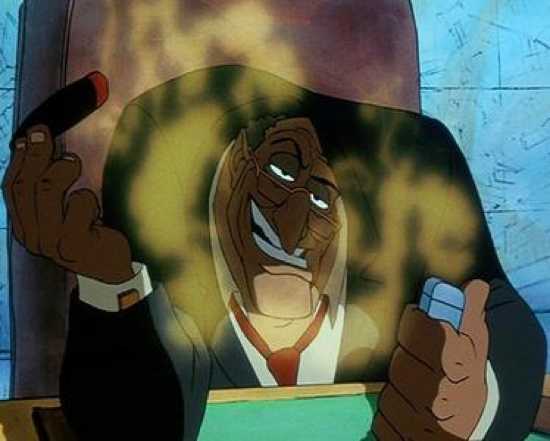 Out of all of the Disney villains, Sykes is one you would find in real life. Sykes is a ruthless loan shark and only cares for money. He gave money to Fagin and his band of dogs, but coldly wants his cash back. Granted that is the purpose of a loan shark, but Sykes is pretty much willing to kill Fagin if it means getting his money back. He eventually learns of Oliver and his new owner Jenny, Sykes kidnapping her and holding her for ransom. Oliver, Fagin and the dogs manage to rescue Jenny, but then Sykes goes on a suicidal and frightfully startling rampage to get her back. He ends up killing his own guard dogs, wrecks his car, chases the heroes on electrified subway rails, and eventually meets his doom when he is pulverized by a train. He does not say a word during the climatic chase; his actions alone prove just how crazy and determined he was to get what he wanted. 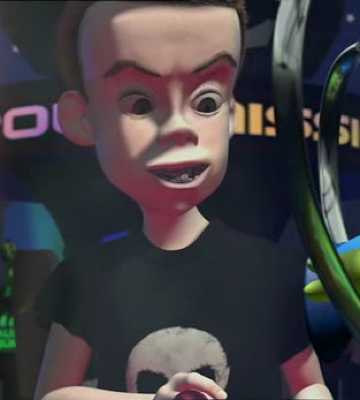 Pixar’s first film Toy Story did not need an evil sorceress, pirate, sea witch or wicked stepmother to act as the antagonist, but rather a toy-destroying bully named Sid. One of the worst nightmares for a toy, Sid gets a thrill out of blowing up toys and turning those he has into mismatched mutants. Among his victims is a Combat Carl who is blown to smithereens by a stick of dynamite, and Buzz Lightyear is strapped to a miniature rocket. The most disturbing thing is that Sid’s mother does not really seem bothered that her son has got his hands on dynamite and an exploding rocket. Woody rallies the mutant toys to stand up to Sid and remind him what the purpose of a toy is – by terrifying him. Although Woody’s actions could have left Sid mentally scarred, it seemed he came out alright, since he cameos in Toy Story 3 as a garbageman. Who knows what might have happened if Woody had not scared Sid. He might have started harming animals, or even people. 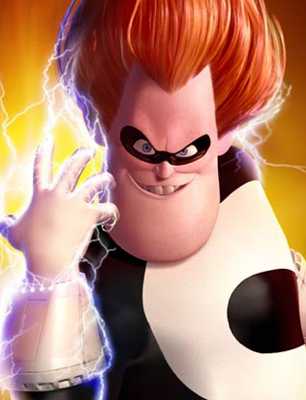 Starting off as another troubled kid thanks to his rejection by his idol Mr. Incredible, Syndrome grew to despise superheroes and became an ingenious supervillain himself. Creating numerous gadgets like a device able to fire zero-point energy and rocket boots, Syndrome used them for evil and murdered a dozen or so superheroes to test out his giant robot, even challenging Mr. Incredible. His ultimate goal was to remove the very meaning of a superhero by pretending to be one at first and then selling his gadgets to the public, so they can become superheroes themselves, to the point that everyone is the same and not “super” anymore. Syndrome is a very twisted villain, more than willing to blow up Mr. Incredible’s family and kidnap his youngest child just to see him suffer. Perhaps if Mr. Incredible has been kinder to Syndrome, he would have turned out all right and become a better person. 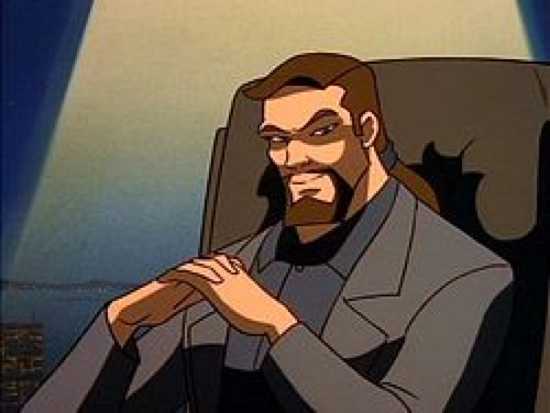 One of the leading antagonists on Disney’s Gargoyles, David Xanatos is an eccentric billionaire who moves an ancient Scottish castle to the top of a skyscraper to awaken the slumbering Gargoyles. He really seeks immortality, and is an intelligent genius and a master of making gambles. He is ruthless and amoral, but is smart enough not to make mistakes, considering vengeance pointless and even tries to look on the brighter side of his defeats. Xanatos eventually falls in love, gets married and has a son, who is saved by his nemesis Goliath, causing Xanatos to drop his feud with the Gargoyles, becoming their ally, and allowing them back into their ancestral castle. 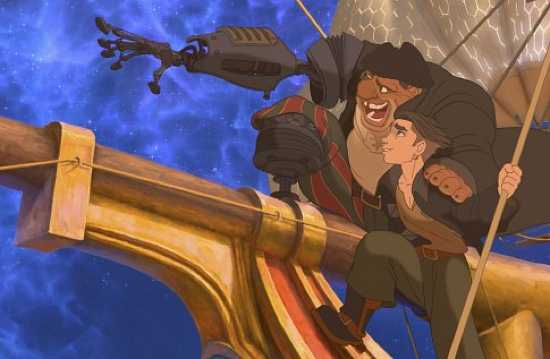 Long John Silver has appeared in several of Disney’s adaptations of Treasure Island, but appeared as a cyborg in Treasure Planet, the ambitious sci-fi take on the classic novel. Like other portrayals, Silver is the cook of the ship bound for Treasure Island with the goal of seizing Captain Flint’s treasure. However, this Silver forms a memorable and touching bond with Jim Hawkins, acting as a father figure to him after his distant father abandoned his family. Silver is really more of an anti-hero than a true villain, but he was added to the list for his development as a character, willing to throw his fortune away to save Jim, and was one of the most memorable characters created by Disney during the 2000s.

4
Davy Jones
Pirates of the Caribbean 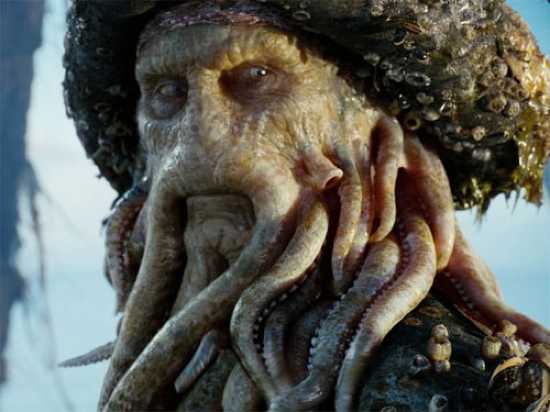 After Captain Jack Sparrow and Barbossa, Davy Jones is by far the most iconic character in the Pirates of the Caribbean series. Sporting a beard of squirming tentacles, a lobster claw for an arm and walking on a “peg leg” made from a crab’s leg, Jones really leaves a lasting impression in Dead Man’s Chest. Carving his own heart out after being betrayed by his lover Calypso, Davy Jones became pretty much the Grim Reaper of the seas, turning his ship the Flying Dutchman and his crew into fish monsters and shanghaiing sailors into his crew for one hundred years of servitude. All those who defy Davy Jones were killed by his pet, the Kraken. Bill Nighy did a fantastical performance, and it was a surprise to many when it turned out Nighy’s “makeup” was actually computer-generated. Overall, Jones is a fantastic villain, but a tragic one at heart, and he knows how far he has fallen and cannot seek salvation. 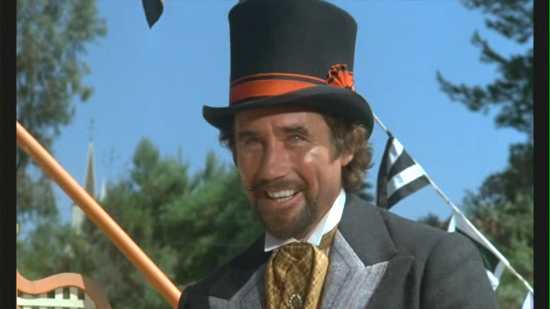 Pete’s Dragon, which seems to be a forgotten classic of Disney’s live action/animated films, has a number of memorable characters like the drunken, panicky Lampy and his daughter Nora who sang the lovely “Candle on the Water,” but the best character is Dr. Terminus. A charismatic, colorfully dressed quack doctor, Dr. Terminus and his assistant Hoagy come to the town of Passamaquoddy to give the townsfolk wacky health cures for money, a daunting challenge since they were chased out of town last time. Dr. Terminus is great fun, and his numerous cures are imaginative if not deadly. At first skeptical to the possibility of the dragon Elliot, Dr. Terminus decides to chop up Elliot and sell off his body parts to make amazing cures and become rich. Jim Dale gives a memorable and hilarious performance, not to mention he’s got one of the best entrances and exits of a Disney villain ever. 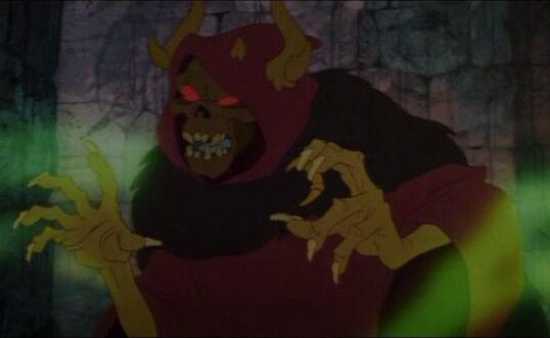 One of the scariest villains to come from the House of Mouse, I failed to put the Horned King in my Top 10 Terrifying Disney Monsters, so I added him to this list. A demonic skeleton king, the Horned King seeks to resurrect his undead army using the Black Cauldron. He is completely focused on his goal and has no time to banter with his minions or have a villain song. But he does need them because his mere presence makes him an awesome villain. John Hurt gives an eerie performance, and although The Black Cauldron is often criticized, the Horned King is definitively one of the highlights of the film. 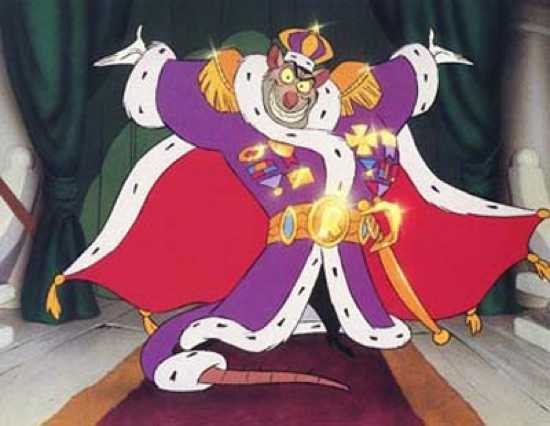 This list started with Vincent Price, and it ends with him as well. Professor Ratigan is often left out of the most popular of the Disney villains and he really deserves to be in the inner circle. Based on Professor Moriarty, Ratigan is a magnificent villain. Intelligent, funny, suave and downright bonkers, Ratigan wants to take control of the British monarchy and outwit his arch enemy Basil of Baker Street. It is great fun watching Ratigan, but beneath his charismatic and funny exterior is a mad, raging beast wanting to get out and seeing him pretty much have a full blown meltdown every time he is called a rat is quite unnerving. Eventually when Basil foils his plans, Ratigan finally snaps and reveals his feral self, and seeing him charging his way through Big Ben to murder his nemesis is a truly nightmarish sight to behold. Professor Ratigan truly earns the title of “The World’s Greatest Criminal Mind.”