Revering the dead is a purely human ideal; unfortunately, it is only an ideal. There have been many occasions – scattered like ashes throughout history – where the dead have been treated less than favorably, sometimes downright improperly. Bodies were, in these haphazard and callous instances, not placed in a finished mahogany beneath a smooth slab of granite, but rather piled up like stacks of rotten meat. Each of these dead, lying like sardines in unlabeled cans, seem to die into a form of irrevocable anonymity. Perhaps though, remembering these individuals as part of a larger number is a way of remembering these individuals as one part of history we hope never repeats itself. In doing so, here are the top ten mass graves: 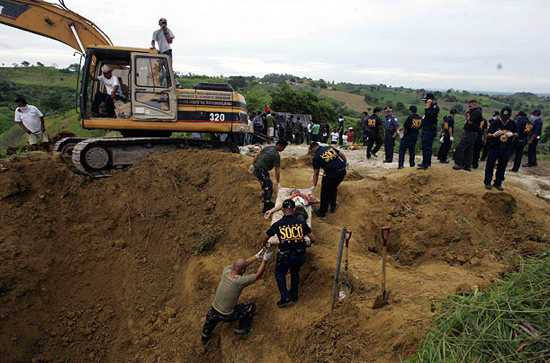 Just 3 years ago, the most brutal mass-murder in journalistic history took place, in which at least 34 journalists were deliberately killed as casualties of political terrorism. There was tension in Maguindanao (a province of an island in the Philippines) as an election was underway; two rivaling members of the same party running for the same office. Vice Mayor Esmael “Toto” Mangudadatu, who was filing his certificate of candidacy, received threats that his rivals (supporters of the Andal Ampatuan, Sr. family) would cut him up into little piece afterwards. Thinking a battalion of journalists would prevent such things from occurring, he invited 37 of them to accompany him. Unfortunately, they were no deterrent, as his caravan was stopped by 100 armed men who went on to slaughter all or most of Mangudadatu’s group in the most heinous of ways (e.g. women, some who were journalists, were raped and shot in the genitals). They were all set to be buried in a mass grave dug two days earlier (along with their vehicles), until they were caught in the act by a helicopter. A shovel found near the site bore the name Ampatuan. A total of 58 people were killed, a count which included – aside from an exceptionally high journalist count – Mangudadatu’s wife (who sent him a text upon recognizing the attackers as Ampatuan’s men), his two sisters, as well as some lawyers and aides. 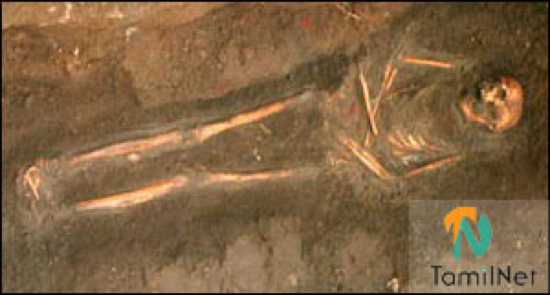 This sports stadium was just one casualty of a Sri Lankan civil war that was responsible for over 65,000 deaths. It was damaged structurally and abandoned during conflict, and its renovation – this was back in 1999 – should have been a sign of comfort. That was until some workers digging into the foundation collided with boney remains. What was discovered was the compacted, skeletal remains of 25 bodies, two of which were children. While there is some mystery about the circumstances surrounding this mass grave – and apparently proper forensic methods weren’t used in the uncovering and could have destroyed necessary evidence – 12,000 civilians are said to have gone missing since the start of the conflict, and a number of residents are still looking for their missing family members, hoping this grave might put their minds at (relative) ease.

This island situated on upstate New York’s Lake Champlain was used as a hospital during the 1814 Battle of Plattsburgh for American and British troops. Being the nearest island to the ground where actual conflict took place, the dead – some of whom washed up on shore – were packed in rows in a mass grave-site south of the hospital. All but respected officers – who received proper graves – were lumped together in nameless piles. Only in 1908 were these men, who indeed had names and distinct identities, commemorated by way of a Congress-commissioned granite obelisk. Although, still no one’s gone so far as to memorialize these men individually. 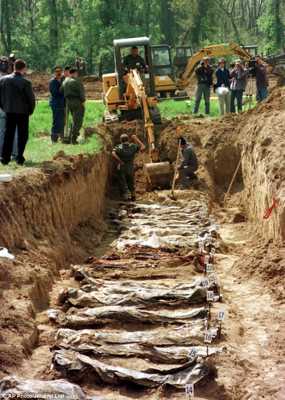 As if we need more proof of how sinister this world and the people in it can be, the Vukovar massacre stands as one more testament to the existence of human evil. Taking place in 1991 just outside the city of Vukovar, which was winding down from battle, the 264 mostly Croatian victims were largely civilians and hospital patients shipped into the prison camp of the Serb militants. Most were executed by shooting, while some were beaten to death-, the bodies were crudely dumped in an unearthed trench and bull-dozed back over. Seven men deemed responsible have since been charged with committing these horrific war crimes by the International Criminal Tribunal for the Former Yugoslavia (Yugoslav military leaders Veselin Šljivančanin and Mile Mrkšić have been convicted, while a few others died before trial and/or committed suicide).

The island was used as a Prisoner of War camp during the Civil War in 1865, and Confederates who died there were buried on the island, along with Union soldiers whose remains were eventually relocated. But the real morbid stuff is that which follows the war; after New York City bought the island in 1869, they decided to use the grounds to unload their dead. A particularly chilling New York Times article titled “Where the Unknown Dead Rest” from 1874 goes on to delineate the procedure by which the deceased are handled, and just how stolidly: unidentified bodies and remains of adults and children are dumped in “common trenches,” but not without a photograph taken at a time when “the process of decomposition is not too far advanced.” Photographs and plots were given corresponding numbers so potential relatives could, upon identifying a body, provide a proper burial. But often times these faceless corpses were presumed friendless (some having died by suicide), while other relatives were simply too poor to afford a traditional (and much more respectful) burial. 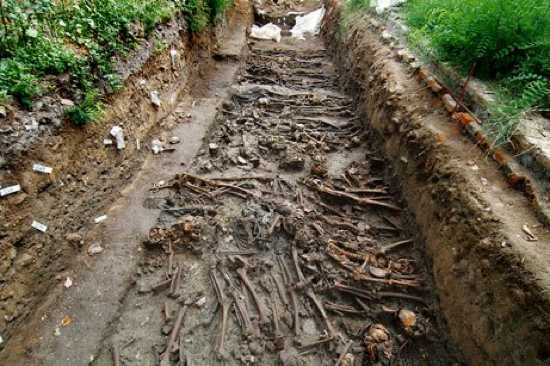 When the Bubonic plague (a.k.a. “Black Death”) ravaged Europe in the 14th century, traditional burial methods had collapsed under the weight of one-to-two-thirds of Europe in corpses. Traditional procession were reserved for the wealthy, or else just deemed too ridiculous with a pile-up that overwhelming. This kind of practice became standard procedure in times of plague, such as when plague struck again in England in the form of the Great Plague of 1665 (this time killing 100,000 people, which is about 20% of London’s population). 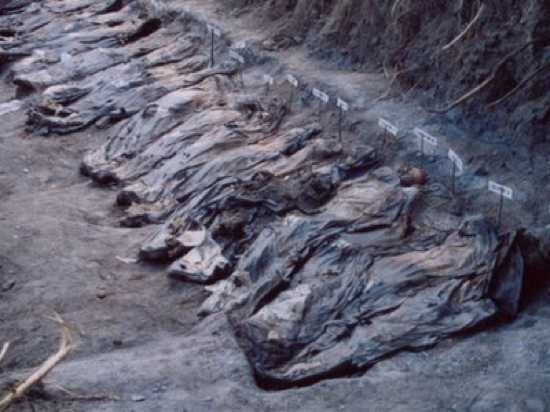 Iraq is basically one big mass burial ground; since the 1980s it has provided pockets of earth in which victims of genocide (mostly against Kurds, as in 1983), massacre, and execution have been laid to waste. There are 250 reported mass grave-sites (40 of which have been confirmed), and a million missing Iraqis – a hundred-thousand of which are presumed to be in one of these collective plots. Some of the most notorious Iraqi auto-atrocities include the rounding up of 8,000 Kurds in 1983 and their execution in the middle of some remote desert; chemical attacks between 1986 and 1988 where the Iraqi Air Force dropped poison on Kurdish villages, killing 5,000 outright (with many more suffering long-term corrosive health defects); and 1988’s Anfal Campaign which resulted in 182,000 missing Kurdi families, with the remains of many wives and children turning up in mass graves. 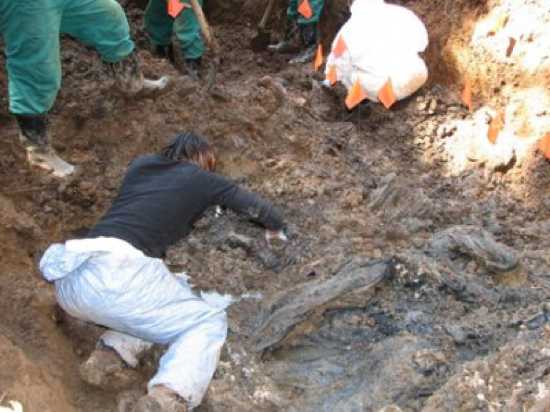 Mass graves in Chechnya have started turning up by the bushel since the start of the Chechen War in 1994. As of 2008, 57 mass burial sites have been located, which may contain thousands of bodies, 5,000 of which are civilians who disappeared amidst the Second Chechen War in 1999. The largest mass grave of them all is in Grozny and contains 800 bodies (from the First Chechen War). While some countries might go so far as to try to help identify the various bodies for grieving relatives, Russia has a general “Do Not Exhume” policy. 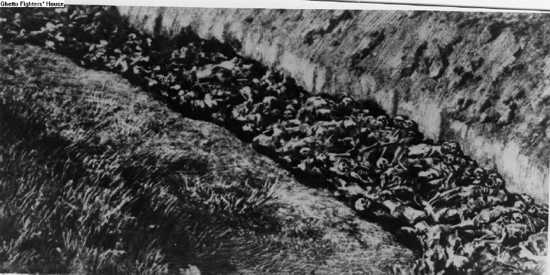 Amidst a totalitarian Soviet Union, and under the crushing hammer of Joseph Stalin, great numbers of Soviet citizens as well as foreigners were executed outright by the famous “secret police” – most popularly via a bullet to the base of the skull – in numbers that reached 700,000 (all dumped in mass graves) by the time of the Great Purge of 1937-1938, whereby all of Stalin’s political opponents were effectively silenced. This was the ultimate means to put the fear of Stalin into the Soviet people’s hearts – fear which can quite easily be fashioned into a crude, desperate kind of loyalty by those who wish to not meet the fates of their neighbors. The graves which are scattered all about the former U.S.S.R. are turning up all the time, with horrifying body counts – in Bykivnia, 120,000-250,000; Kurapaty, 30,000 to 200,000; Butovo, more than 20,000; and Sandarmokh, more than 9,000 dead.

1
The Killing Fields in Cambodia 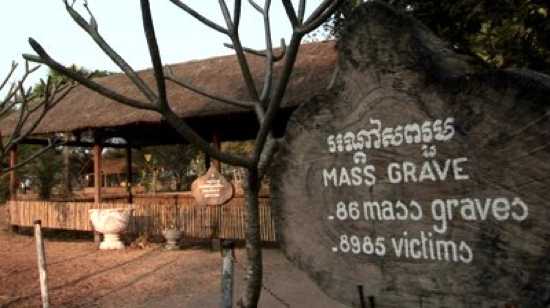 Pol Pot is one more name to add to a list which includes the likes of Adolf Hitler and Joseph Stalin, as genocide by the staggering numbers was what he was best known for. He has 20,000 mass grave-sites in his name, containing a minimum of 1.38 million bodies. Amongst them are: anyone associated with (or even suspected of) the former government, intellectuals/professionals, and a variety of ethnic/religious groups his regime singled out. His Kmer Rouge regime only lasted from the end of the Cambodian Civil War (1975) to 1979, but in that time he accomplished a great deal of evil.