Whether they died yesterday or 40,000 years ago, the dead can often tell us as much—if not more—about ourselves as the living. For most of human history, we generally accepted religious explanations for the roots of mankind. It wasn’t until the advent of modern archaeology and carbon dating that we started to paint a clearer picture of where we came from. Of course, the work of Charles Darwin and the theory of evolution helped. 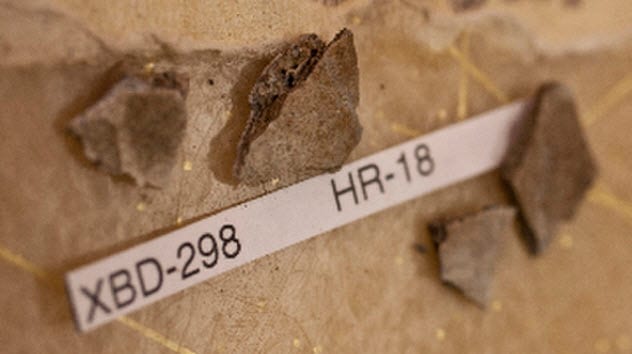 The first find on our list teaches us about our religious history, including just how long humankind has been practicing death rituals and what they might have meant. This grave and the corpse inside also reveal a lot about the early native population of Alaska, a rural people.

In 2011, archaeologists uncovered a settlement in the middle of nowhere that contained the remains of a three-year-old child. This grave is 11,500 years old, and curiously, the child had been cremated.

Archaeologists found no hack marks on the bones and absolutely zero evidence of murder or cannibalism, suggesting that this was a spiritual or religious cremation. The natives of Alaska seemed to have some concept of cremation and the afterlife, though more will need to be found before we can state for certain just what these beliefs were.

At 11,500 years old, this is one of the oldest human graves we have, especially in the Americas. The body was left to burn for 1–3 hours before burial.[1] 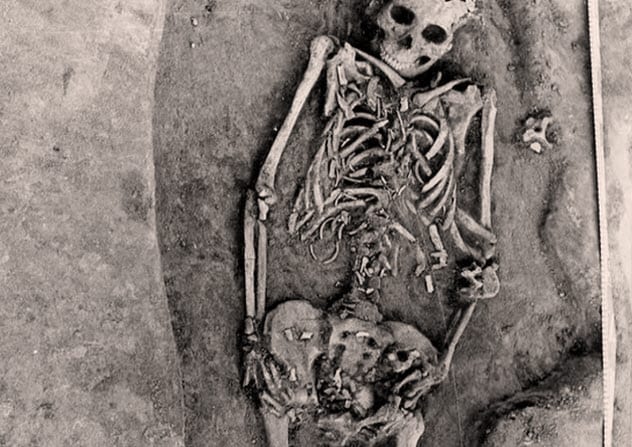 In 1997, a prehistoric gravesite was discovered in Russia near an area carved out of a hill by the former USSR for construction of the sprawling Trans-Siberian Railway. The burial place was 7,000–8,000 years old and contained at least 101 bodies.

This was an extremely rare find because most hunter-gatherer societies did not formalize the burial process, especially in one designated place. But this grave contained something else that was unusual—a mother who had died in childbirth. The bones of a baby were found between her thighs, and nobody thought much of it at first.[2]

Upon further investigation of the infant, researchers noticed that there were duplicates of each bone—four arms, four legs, two skulls, and more. This woman had died giving birth to twins. As of this writing, this remains the first documented case of twins in history. 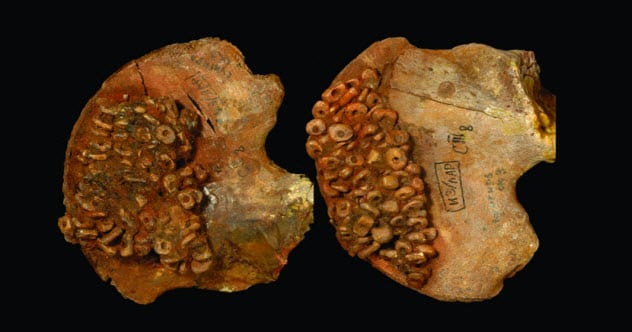 Another strange find in the world of ancient graves hails from the icy plains of Russia in an area known as Sunghir. Excavations began there in 1957 and continued for 20 years. One striking fact is the sheer age of the site: The remains of the people there are estimated to be 30,000–34,000 years old, which places them in the Paleolithic period.

It’s also unusual that the remains were highly decorated. The friends and families of the victims of this hunter-gatherer tribe had painstakingly wrapped the corpses in mammoth ivory beads and fox teeth which had been sewn into the clothes of the individuals buried there.

It’s almost impossible to fathom what life must have been like for these individuals, but this burial gives us insight into some of their deepest emotions at the time. Images of these bead-clad bones are stunning and demonstrate the human passion for expressing love and caring for one another—even when the person is dead.[3] 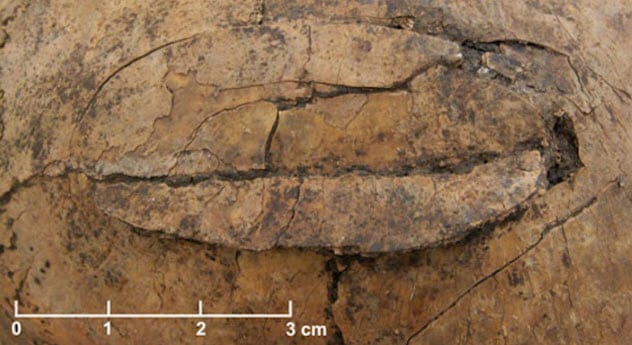 In contrast to the site at Sunghir, a shocking gravesite was discovered near Frankfurt, Germany, which showed the dark side of humanity. This 7000-year-old burial place contained the remains of at least 26 people who had been brutally beaten—possibly tortured—and then murdered.[4]

The bodies of the victims were also mutilated after death. The skulls had been bludgeoned or smashed. The legs had been broken, suggesting that the perpetrators fractured the victims’ legs to keep these individuals from running away. The massacre included the indiscriminate murder of the tribe’s small children. 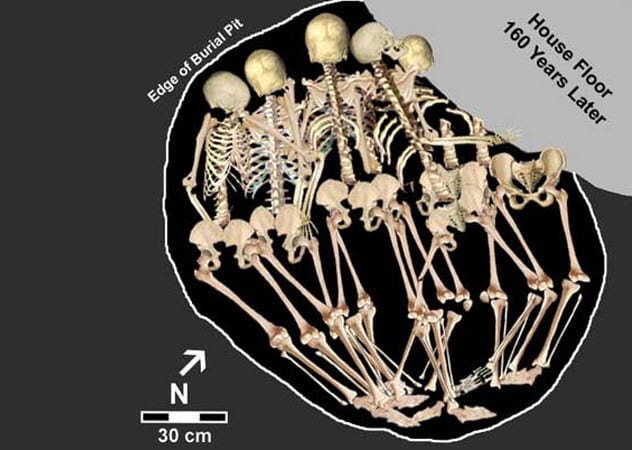 Warfare has been the way of humankind throughout its existence. Native Americans had been locked in conflict over their lands for a long time. Maybe not surprisingly, the seeming paradise of sunny California was once a battleground filled with intertribal warfare and bloodlust.

During the 2012 construction of a shopping mall in the San Francisco Bay Area near Oakland, California, workers dug up a grave with seven bodies of men who appeared to have been brutally murdered. This was the Saint Valentine’s Day Massacre of 1,150 years ago.[5]

Their skulls had been smashed and their bones broken. However, the teams digging also found stone weapons among the bodies. The victims were not related and had journeyed for miles to their place of execution.

Could these men have been some of the first prisoners of war? Or were they just bandits in search of food and fresh water?

Researchers believe that the population in the area grew dense, and smaller bands of humans left the larger group. After they went to settle somewhere new, they were killed and quickly buried. 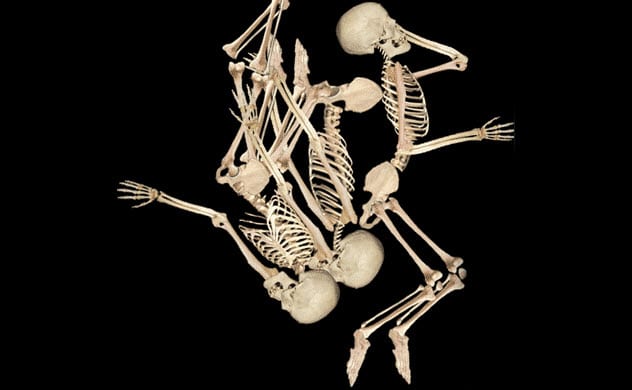 Another prehistoric grave yielding a murder mystery is the so-called “Mass Grave of Prodigal Sons” in Central California. Four victims who were killed 560 years ago were discovered by a farmer in 1964, although only three of the bodies were excavated.

As noted, the state of California in prehistory was riddled with violence. It isn’t unusual to find pits with bodies that have broken limbs or crushed skulls. The oddity here is that the murderers went into overkill mode. The victims had been shot several times with arrows. Each body had been pierced by at least three arrows, with one victim shot seven times.

Researchers have a good idea of who was living where at the time, which has led to another strange mystery. The victims were born and lived as children where they died. But chemical analysis shows that they did not live as adults where they died.[6]

Did they leave their home tribe and go off to start a new life, only to return and be shunned and murdered for their mutiny? At this point, the story isn’t clear. Maybe it never will be. But it is fascinating. 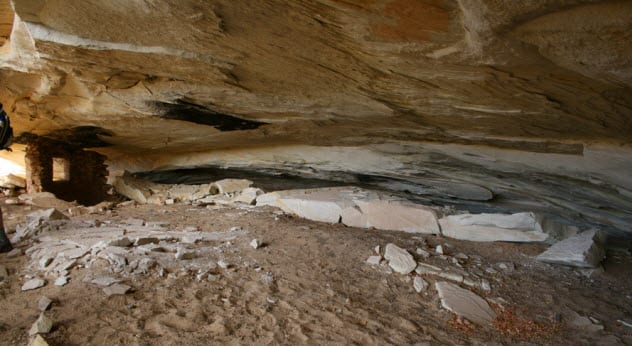 In southeastern Utah, a cave was discovered to be a mass grave that may be evidence of prehistoric warfare. About 90 bodies were found, and the majority had wounds consistent with combat.

Excavations began in 1893, and there has been some heated debate as to exactly what happened to the people at this 2,000-year-old site. Limbs and bones were broken, skulls were bludgeoned, and weapons were still inside the skeletal remains.

Is this evidence of prehistoric warfare or simply a dumping site for the dead bodies of tribal clashes or murders?[7]

If it’s the former, this suggests that hunter-gatherer tribes were not generally peaceful. It probably wasn’t until traveling bands of human beings became civilized settlements that resource battles really became a thing. Some people believe that as societies become more complex, a human predisposition toward violence presents.

Others suggest that interpersonal and intertribal violence is merely a by-product of the concept of territory, something that isn’t a part of the hunter-gatherer mindset. Although over 100 years have passed since the excavation of the site, perhaps it will help shed light on new digs as we peer into our distant past. 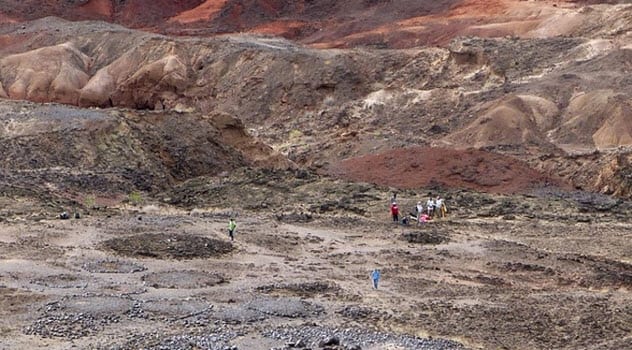 In Lake Turkana in Kenya, a settlement was discovered with a mass grave that was extremely unusual, leading researchers to exclaim that they had never thought it was possible. This massive, megalithic grave structure, like a tomb, had been built by the people on the plains of Africa some 5,000 years ago.

The traveling bands of humans at the time didn’t build large graves generally. Yet this platform had a 27-meter (90 ft) diameter with a hole in the center that housed the remains of at least 580 human beings. Beads and other decorations were also found at the site, suggesting that much time and effort was put into honoring the dead.

Typically, people who construct such a large tomb have hierarchical societies which allow one group to tell another what to do and when. But the people who built this structure were an egalitarian society of free individuals who worked together voluntarily to survive. When they died, they paid their respects to the dead.[8]

This society was pastoral, meaning they raised and herded livestock. They probably distributed the work evenly and voluntarily, giving credence to the widely believed idea that we don’t need society to force us to be responsible. 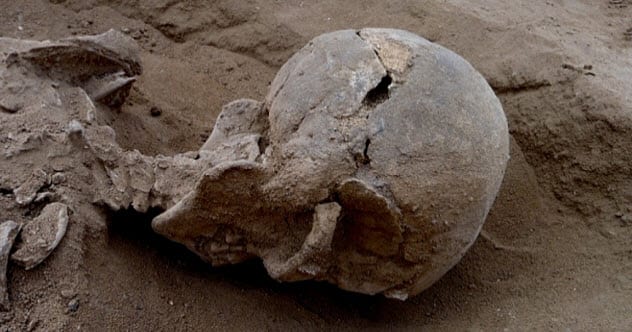 A site at Nataruk near Lake Turkana is unusual due to its sheer age. Although the mass grave contains the nearly complete skeletons of 27 people who lived only 10,000 years ago (compared to the site at Sunghir that’s 30,000–34,000 years old), Nataruk reveals some of the first evidence of war.

This site wasn’t a burial place. The bodies were just left out to rot and showed all the hallmarks of prehistoric warfare. So, were the hunter-gatherers mostly peaceful or mostly warlike?

The answer is probably both. Previous to this find, the oldest-known war grave (except for Cemetery 117) was from 5000 BC in Darmstadt, Germany.[9] 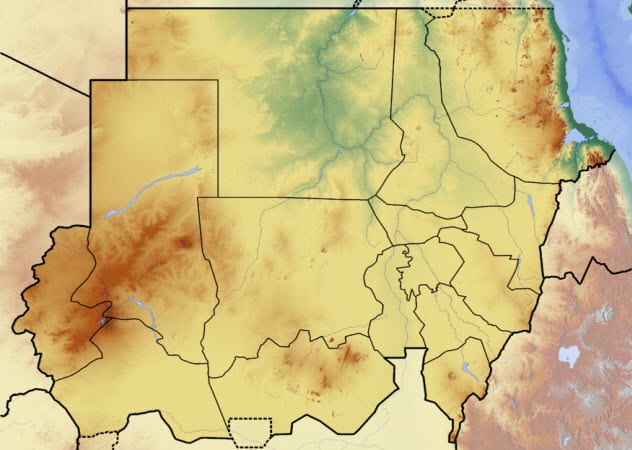 Jebel Sahaba is another name for what scientists and archaeologists call “Cemetery 117,” a gravesite in modern-day Sudan that’s currently believed to be the oldest-known war cemetery. Spear and arrow wounds show that this was the scene of a bloody war about 12,000–14,000 years ago.[10]

Of the 61 people found in this mass grave, 45 percent of the remains had injuries consistent with acts of war. The people died from wounds inflicted by arrows and spears. Cut marks were also found on some individuals, signaling mutilation before or after death. Most of the wounds were discovered on the victims’ chests, necks, jaws, and heads.

I like to write about dark stuff, history, true crime, and more.

Read about the compelling secrets buried or submerged in mysterious graves on 10 Mysterious Graves That Defy Explanation and 10 Mysterious Watery Graves.