Ancient burials can release a lot of information about the past. However, the rare ones often highlight the incompleteness of our known history. For some reason, the ancients mummified mice, wore bird beak collars, and put horses in boats.

When rare burials do reveal tangible information, the stories can range from the unexpected—like the Europeans who became the biblical Philistines—to the familiar urban violence of the world’s first cities. 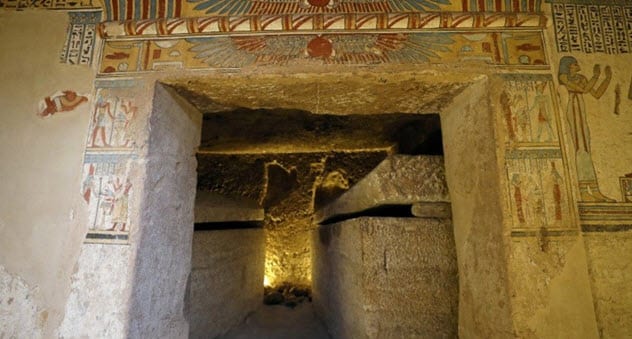 During 2018, smugglers were caught red-handed breaking into a tomb in Egypt. Give credit where it is due—the thieves were the first to find the chamber. Located near the Egyptian town of Sohag, it was described as beautiful and colorful.

The tomb itself was created around 2,000 years ago and was painted in great detail to show funeral processions and workers toiling in the field. Although it still needs to be confirmed, the tomb originally could have belonged to a married couple. The husband was thought to be a high-ranking official called Tutu.[1]

Two mummies were found inside, but they were not a couple. The woman, aged 35 to 50, was interred with a boy aged 12 to 14. They were surrounded by a menagerie of animal mummies, including cats and birds. For some inexplicable reason, there were also over 50 mummified mice. 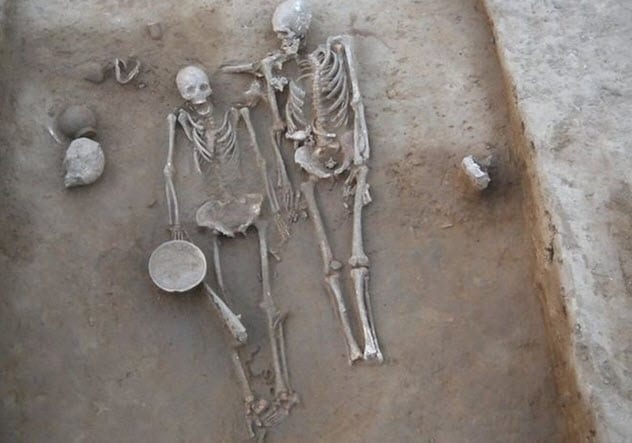 The Indus Valley produced several ancient and mysterious cities, the most famous being Mohenjo Daro. In 2016, excavations focused on a cemetery at Rakhigarhi. Located in the Indian state of Haryana, this was the biggest of the Indus settlements. The graveyard surrendered 70 burials, but one was striking enough to stand out.

The shallow grave held a man and a woman. The two skeletons were turned so that they faced each other in an intimate way. This led to the suggestion that the pair had been married in life.[2]

They died around 4,500 years ago, but the cause of death remains mysterious. Both were in good health, and their bones showed no injuries or signs of disease. They were also young. The man was around 35, and the woman, 25.

Despite appearing in their prime, both seemingly passed away within a short time of each other. This could have prompted the community to bury the couple together, but it remains exceptionally unusual for the time. 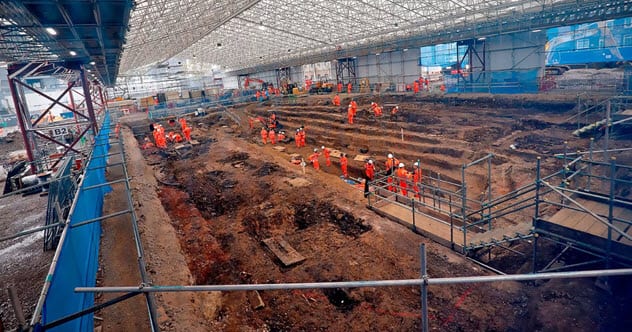 When Captain Matthew Flinders circumnavigated the coast of Australia, it helped to identify the landmass as a continent. In 1814, the English explorer died young at 40 and was buried close to Euston Station in London.

During 1849, the grave’s location vanished when the railway expanded and Flinders’s tombstone went missing. Given the large number of people buried there, many doubted that Flinders would ever be found again.

In 2019, the construction of a high-speed rail reached within the St. James burial ground where Flinders was interred along with 40,000 other people. Working alongside the builders, archaeologists kept an eye out for the explorer. They were lucky. One coffin had a lead plate—a good choice if you want to avoid corrosion—which identified the remains of Matthew Flinders.[3] 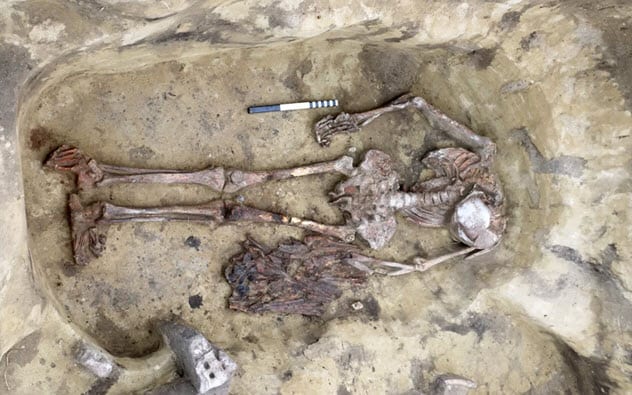 In 2019, archaeologists unearthed a grave in Siberia’s Novosibirsk region. Bronze Age skeletons have been found in Siberia before, but this one stumped the experts. The man was buried 5,000 years ago with an unusual garment—a collar of bird beaks and skulls.

With the number of skulls and beaks estimated to be as high as 50, it seemed natural to name the skeleton “Birdman.” The purpose of the piece remains mysterious.[4]

The bony parts could have protected his chest like armor. It might have been a ritual requirement, or maybe the guy just liked birds. The collar could even have been a headdress.

The Birdman was not alone. A nearby grave was divided by a wooden partition. The top part held two children who died below the age of 10. The lower part held a man buried with an unusual bronze mask. The mask and collar suggested that the two men might have been shamans. 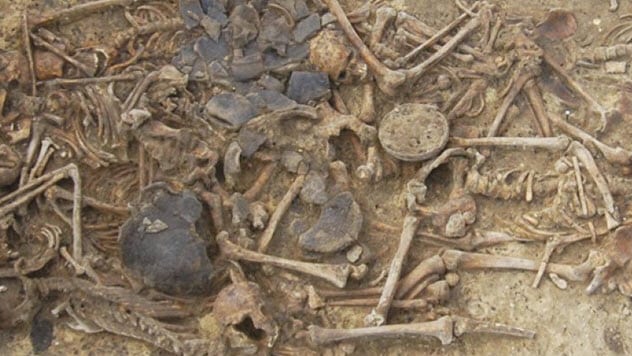 In 2011, a mass grave was opened near the Polish village of Koszyce. At first, it seemed like just another Bronze Age massacre. Around 5,000 years ago, 15 adults and children had their skulls bashed in.

A recent study revealed the heartbreaking story. It started when researchers realized that somebody had buried the victims with care. Soon, their DNA revealed that it was an extended family. There were few men, either very young or old for the time. Most were women and children.

Tests showed that each of the four mothers was buried next to her own children and that the fathers were not in the grave. Whoever buried the women, lovingly between grave goods and their children, knew how everyone was related.

It is thought that the strongest men, the fathers, left the homestead for the day—something the attackers were waiting for. When the men came home, they were met with the horrifying sight of their slaughtered wives, sons, and daughters.

The reason for the massacre will never be known, but it could have been intercultural violence. This group belonged to the Globular Amphora culture who was in conflict at the time with the Corded Ware people.[5]

5 The First City Was Violent 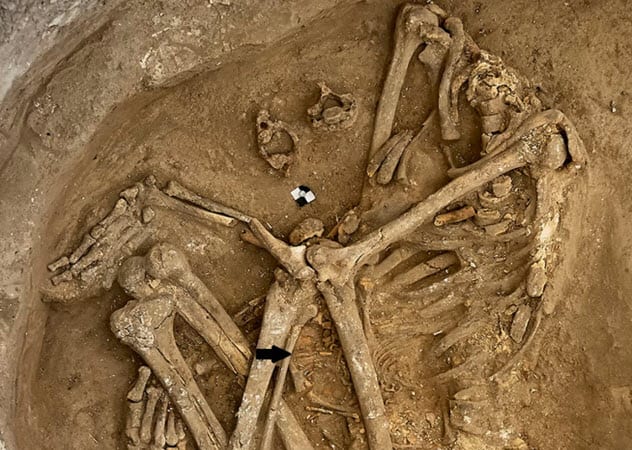 Catalhoyuk in Turkey is viewed by many as one of the world’s first cities. Around 8,000 people crowded together during the peak of its occupation, and in 2019, archaeologists found that the close living conditions were a vector for disease and violence.

The study combed through 25 years’ worth of research done on the 32-acre site. More specifically, they reviewed the remains of 742 citizens. People lived there for around 1,000 years (7100 BC to 5950 BC). At one point, houses became so closely stacked that going home meant climbing through the roof.[6]

The skeletons dating to Catalhoyuk’s highest population days showed an increase in violence. Women suffered more brutal blows to the head and skull fractures. The researchers felt that the switch from foraging to farming and then living in cramped conditions with disease outbreaks and people everywhere turned tempers more vicious. 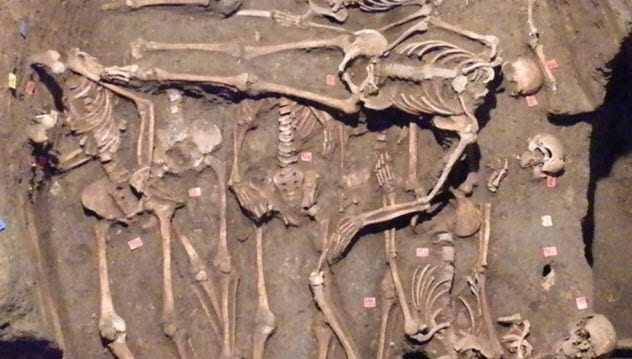 The Sedlec Ossuary is a chapel in Czechia that dates back to around AD 1400. The site is grimly decorated with up to 70,000 skeletons. In 2017, repair work led archaeologists to 30 mass graves underneath the chapel. They contained 1,500 skeletons, which was a record for the region’s High Middle Ages and the biggest grave cluster in Europe.

The new pits were older than the chapel. Dating tests placed the remains in the 14th century, but from two different periods. The oldest marked burials from AD 1318 when famine razed the region. Younger pits from AD 1348–1350 marked the peak of the Black Plague.

All the signs suggested that the people were hastily buried, probably due to the corpses piling up and the fear of infection. Tombstones are not practical during such disasters, which was why the builders of Sedlec Ossuary likely never knew the mass graves were there.[7] 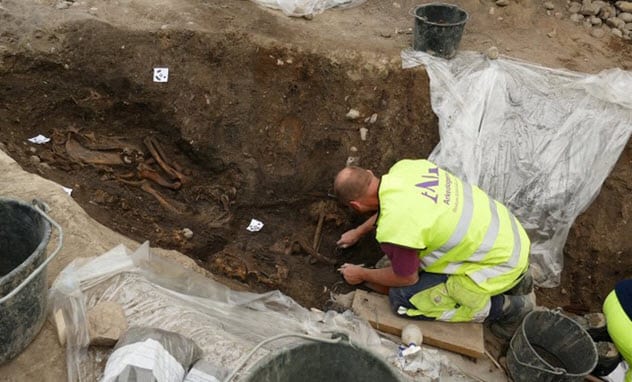 In 2019, archaeologists worked at medieval ruins at Uppsala in Sweden. They were not looking for one of the rarest burials in existence—boats serving as coffins. Boat burials date from 550 to 1050 and were reserved for the upper crust of society.

They discovered two. The excitement hit the roof when one was found to be intact. It carried the skeleton of a man in the stern, while those of a horse and dog were arranged within the bow. The other boat was badly crushed, probably when the 16th-century well and cellar were constructed.

In Sweden, only around 10 of these boats have been recovered. A few were in terrible condition. The rest were mere soil impressions with the vessel long since destroyed by rot. This made the pristine Uppsala boat a unique and valuable find.[8]


2 Ancestors Of The Philistines 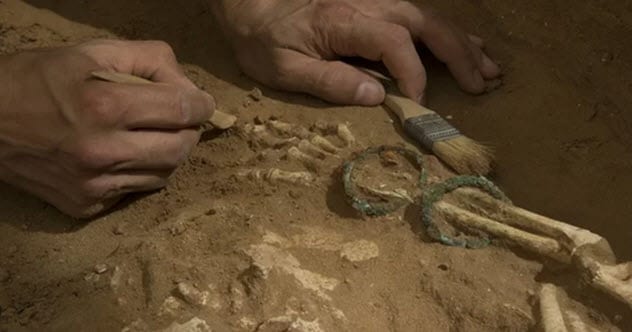 The Philistines were often the bad guys in the Bible. The giant Goliath (whom David killed) and Delilah (who betrayed Samson) were both Philistines. Historians tried for decades to find the mysterious group’s origins, and genetic tests cracked the case in 2019.

The DNA was pulled from 10 skeletons in a Philistine cemetery in Ashkelon in Israel. These individuals, who lived around 3,600 and 2,800 years ago, revealed that the Philistines were not originally locals. Their ancestors came from seafaring cultures who crossed the Mediterranean, including people from Sardinia, Greece, and possibly Spain and Portugal.

Their southern European genes were undeniable. The different ages of the skeletons also showed that they arrived around 3,000 years ago and that their genes thinned out fast. They intermarried with the locals and were completely assimilated into the population within 200 years.[9] 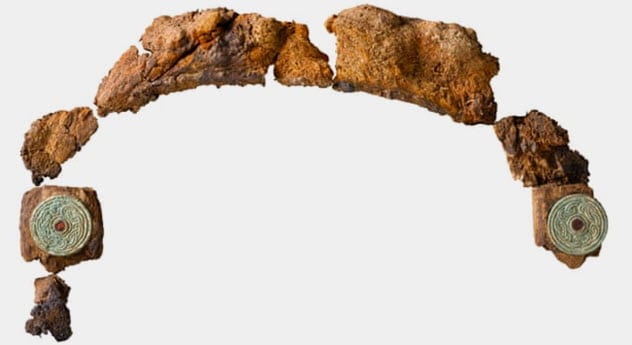 In 2003, a road was expanded in Prittlewell in Essex. This led to the discovery of what archaeologists are calling “Britain’s Tutankhamen.” It was a burial chamber from the late sixth century filled with exquisite details. Unfortunately, all the organic stuff was gone. However, there was enough to understand how the chamber was crafted and that the occupant was a high-status male who had been rich and powerful in life.

The main candidate is an Anglo-Saxon prince named Seaxa. When the man died, about 13 oak trees were felled to create the tomb. It required the strength of teams, numbering up to 25 and working in shifts, to complete it.

Among the grave goods was a musical instrument called a lyre. This particular lyre had parts connecting it to Sri Lanka or the Indian subcontinent. There were also gold foil crosses, a surprisingly early mark of Christianity for the region.

Both crushed the belief that Essex was the Anglo-Saxon backwater of its time. Instead, Essex likely had long-reaching trade routes and was at the forefront of religious and cultural changes.[10]

Read more fascinating facts about ancient graves on 10 Prehistoric Graves And Their Findings and 10 Mass Graves Filled With Animals.