Science fiction as a film and TV genre is generally held with some disdain. This is despite the fact that it is immensely popular, and on lists of the highest grossing films, sci-fi films are always up there. One of the things which sell sci-fi is that their universes often include high-tech weapons which lead to thrilling action scenes. Here are ten of the best and most creative weapons in science fiction. Let the arguments rage in the comments as to which of these would be most useful in a fight. 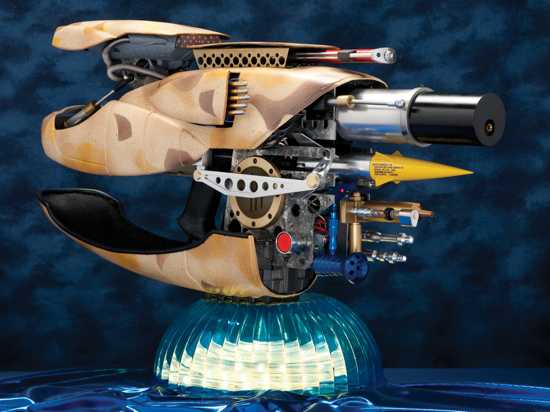 The Fifth Element, directed by Luc Besson, is one of the most sumptuously designed science fiction films ever made. While the film contains many aliens and strange technologies, the ZF-1 gun is pure human ingenuity. It is a weapon for a person who cannot choose weapons. The ZF-1’s most impressive feature is the ability to fire a tracer round into a target, after which every bullet which the gun fires (no matter in what direction) will hit the first target. If that is not sufficiently impressive the gun can also fire poison gas arrows, a net, a flame thrower and freezing gas. 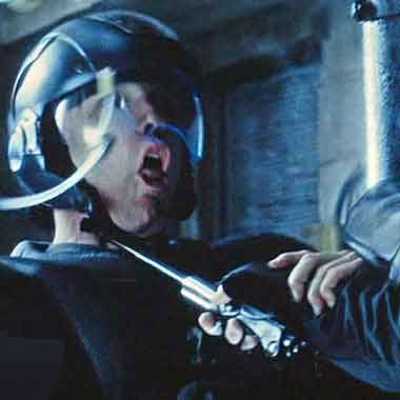 In the world of Minority Report all violent deaths caused by people can be detected by ‘pre-cogs’ and stopped by law enforcement. If the police used lethal weapons it would surely blur the future murders seen by the pre-cogs. To incapacitate the people they seek, the future crime cops use something called a ‘sick stick.’ One touch of this cattle prod-like device and the future criminal is doubled over, vomiting helplessly. Messy but effective. If ever invented I’m sure the sick stick will be used mostly for pranks and clearing busy lines in shops. 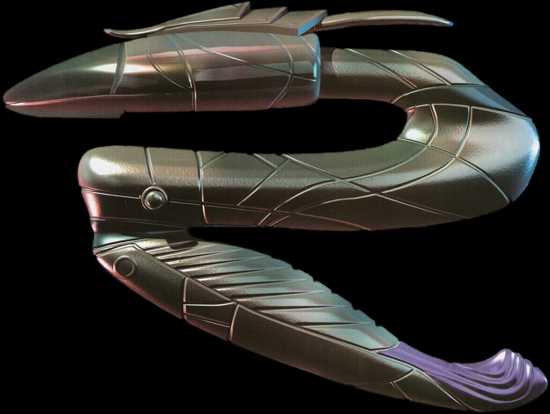 The Zat gun, short for Zat’nik’tel, is a Goa’uld weapon in the Stargate universe. One shot of the blue energy the Zat discharges will incapacitate the target with immense pain. A second shot will kill and a third, in quick succession, will cause disintegration. The weapon has a serpentine shape which springs forward when activated. The Zat is either a merciful weapon, having a non-lethal function, or a weapon of intimidation (the non-lethal function hurts like hell). 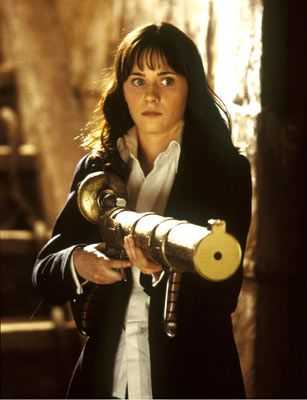 From the film version of the Hitchhiker’s Guide to the Galaxy comes the Point of View gun which was ordered by angry housewives who were fed up with arguments ending with them shouting “You just don’t get it, do you?” The Point of View gun causes the target to understand the perspective of the person shooting the gun. While this should disarm conflict by fostering sympathy between individuals, in the film it becomes a devastating weapon. When the gun is fired by Marvin the chronically depressed android the gun causes the Vogons to simply give up, overcome by Marvin’s melancholy outlook. 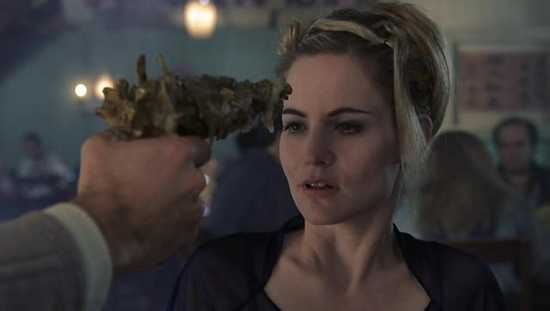 A weapon designed by David Cronenberg was always going to be bizarre and the bone gun does not disappoint. The bone gun is central to the plot of the film eXistenZ. The gun is made from a mass of bone and flesh and, when shot, fires not bullets but human teeth. The gun, being organic, can be taken through metal detectors and so is the perfect assassination tool. 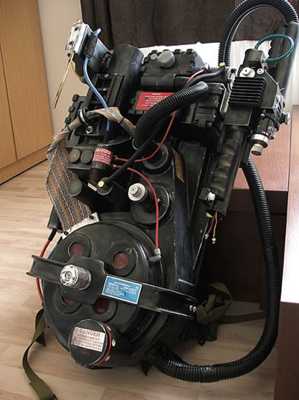 The Proton Pack from Ghostbusters is the weapon for people who grew up in the 1980s. The weapon fires a beam of energy at ghosts that weakens them sufficiently to be captured. The Proton Pack has one major drawback; the streams of energy should on no account be crossed. If this happens “It would be bad… Try to imagine all life as you know it stopping instantaneously and every molecule in your body exploding at the speed of light.” Although when we do see the streams cross in the second film very few molecules appear to explode. 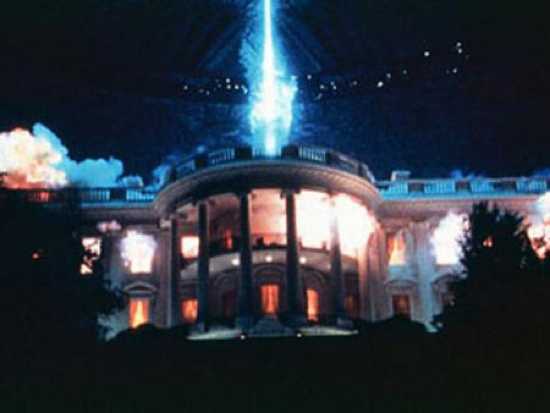 The Landmark Destroying Beam (not its official name) from the film Independence Day is a super weapon. A single firing of the weapon from an alien saucer can immolate an entire city with a slow spreading ring of exploding fire. The weapon gets its name from the fact that the aliens in Independence Day have a fondness for sightseeing and settle directly over world landmarks which they then destroy. It seems a bit like they are rubbing our faces in their superiority. The downside to this weapon is that it can only be fired from a ship that’s computer system has no firewall or virus protection. 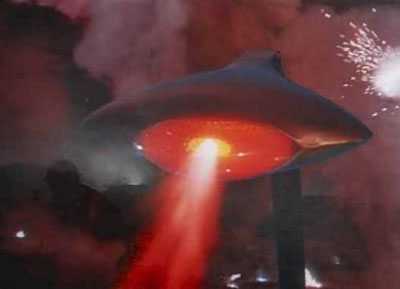 When the Martians invade Earth in H.G. Wells’ War of the Worlds with the aim of colonization and farming of humans, they bring an array of futuristic weaponry including poison gas. Wells’ novel has been filmed several times but the weapon which is always included is the Martian heat ray. When the beam touches anything flammable it bursts into flame, water explodes into steam, and human flesh ignites (or disintegrates depending on which film version you are watching). It is an ingenious weapon and the Martians would undoubtedly defeat Earth in a fair fight. It is a pity that the Martians did not spend more time researching antibiotics. 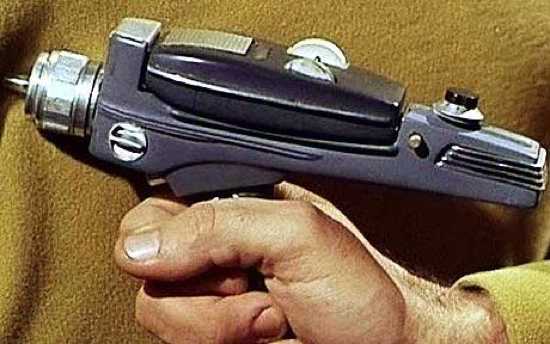 The Phaser (PHoton mASER) is the hand-held energy weapon used by Starfleet personnel in the Star Trek universe. The Phaser is a versatile weapon which can be used at a range of settings and in a variety of ways. Lower settings can stun individuals, medium ones can kill, and the highest settings can vaporize rock. Seen in all generations of the Star Trek series, the Phaser is probably the best-known television science fiction weapon. 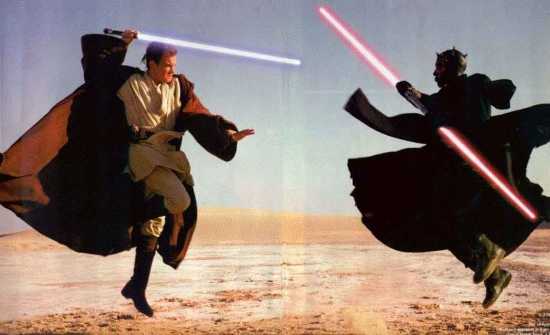 While not as clumsy or as random as a blaster, the lightsaber from the Star Wars universe can only be wielded properly by a Jedi or a Sith. These hand-held weapons produce a beam of energy which can cut through almost any material. While the limited range of a sword may be a disadvantage, the innate skill of a Force-user makes it a deadly weapon. The beam can deflect blaster fire or reflect it back at an attacker. If the wielder is sufficiently flamboyant they may ever throw the lightsaber like a deadly boomerang. The lightsaber has become iconic as the weapon of science fiction.