Alcohol has helped shape the course of human history. For much of that history fresh water has not been safe to drink and carried a huge risk of infection. Fermenting fruit and brewing beer provided a safe way of drinking as the ethanol kills any bacteria. Unfortunately the pleasures and the benefits of alcohol come with a downside- the hangover. For as long as people have been drinking they have suffered the after-effects. For as long as they have suffered the after-effects they have tried to ward them off. Here are some ways that have been tried in various times and places, some strange and some that just may work.

P.S. Of course the best way to cure a hangover is not to develop one by not drinking alcohol. I abstain from everything, including abstinence. 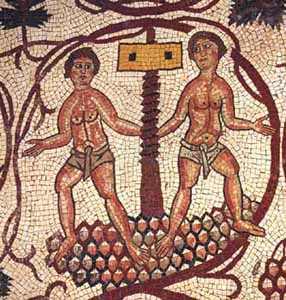 The Romans, like the Greeks before them, were fond of wine. They usually drank it diluted with water but it was not unknown, even if frowned on, for people to get a little too merry. Pliny the Elder wrote of drunks and drinking-

“…drunkard never beholds the rising sun, by which his life of drinking is made all the shorter. From wine, too, comes that pallid hue, those drooping eyelids, those sore eyes, those tremulous hands, unable to hold with steadiness the overflowing vessel, condign punishment in the shape of sleep agitated by Furies during the restless night, and, the supreme reward of inebriety, those dreams of monstrous lustfulness and of forbidden delights. Then on the next day there is the breath reeking of the wine-cask, and a nearly total obliviousness of everything, from the annihilation of the powers of the memory. And this, too, is what they call “seizing the moments of life!” whereas, in reality, while other men lose the day that has gone before, the drinker has already lost the one that is to come.”

How to regain the day is to come from a hangover? One remedy for headaches he suggested was to take snail’s heads and crush them and rub them on the forehead. A specific cure for hangover is to fry a small bird whole and eat it entirely. Neither of these, as yet, have gained wide spread scientific backing.

Should you wish to give up alcohol entirely and cannot be bothered with 12 steps Pliny offers a quick suggestion for bringing about distaste for drink- mix owl eggs with wine and drink that for three days. Magically this will stop you wanting to drink any more. 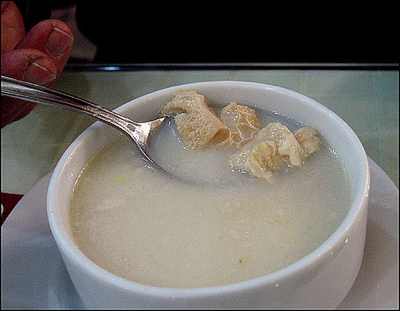 Tripe soup is thought to be an effective cure for hangovers in several European countries. Tripe, offal made from the digestive tract of pigs or cows, is highly nutritious with high levels of fatty acids and protein. As we shall see with this list soups are highly regarded for their hangover fighting qualities. As well as being warming and comforting they provide liquid and salt that the body craves. The Japanese have a well known fondness for sake, which can bring about both hangovers and karaoke. While the singing may be unavoidable they have developed cures for hangovers. A particularly favoured cure is umeboshi. These are Japanese apricots which have been pickled and then dried. The effectiveness of umeboshi has yet to be ascertained but they are also thought to slow aging, so you may be getting several benefits at once.

A more effective cure is to take clams, or really any seafood, in a salt-rich broth. This will serve to rehydrate you and replace minerals you will have lost the night before.

Dried bull penis used to be the go-to cure. In many ways a penis is a good source of protein. Since it is possible to turn a dried bull penis into a walking stick it could well be that by the time you have chewed your way through one so much time has passed that the hangover has cured itself. 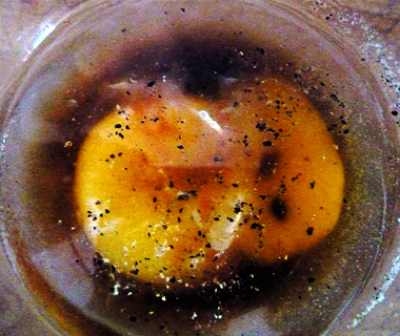 The prairie oyster is a cocktail made to buck you up the morning after a heavy night of drinking. A raw egg is placed in a glass, with the yolk intact to give the appearance of an oyster, with Worcestershire sauce, a shot of spirit (optional), Tabasco sauce, a dash of vinegar, and salt and pepper. You then drink the mixture in one swift movement as you would an oyster and, in theory, feel pepped up and ready to face the day. The protein in the egg will certainly help with a hangover, though you might like to add a large glass of water afterwards to help with dehydration. 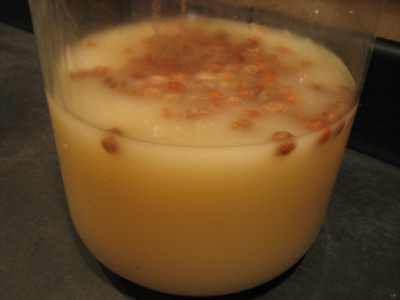 Until recently in Russia beer was not really considered alcoholic, and compared to their more potent spirits you can see why. The Russian fondness for alcohol has produced several competing schools of thought when it comes to hangovers. Some suggest drinking the liquid from various pickled foods, called rassol. The liquid contains salt and various spices so may serve a similar effect to the Japanese broth.

Another cure is to drink kvass the next morning. Kvass is a mildly alcoholic beverage made by soaking dried rye bread with sugar and yeast until it ferments. Let’s face it though – the cure looks worse than the hangover.

For a cure fit for the Tsars there is the Nikolashka. This is a slice of lemon, with sugar and ground coffee on top, swallowed in one bite. 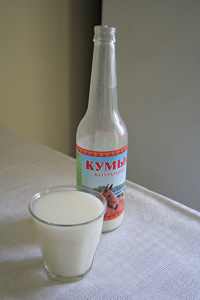 Kumis, fermented mares milk, is a popular drink in Mongolia. The fermentation helps to break down the lactose which many Mongolians are intolerant to. Kumis is generally only weakly alcoholic, though it can be fortified, so getting drunk on it is somewhat difficult. To get merry in Mongolia now there is a thriving vodka industry. You would be forgiven for trying your hardest not to get drunk if you had to face the morning after remedy of pickled sheep eyes in tomato juice. This may be cultural bias, but I do prefer my drinks not to look at me as I down them. The tomato juice will be a huge help with a hangover and the eyes, if you can keep them down, are a rich source of protein. 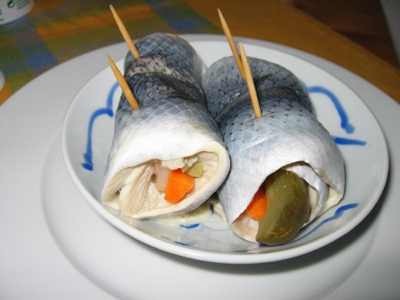 The German for hangover, Katzenjammer, relates to the screeching of cats and refers to the noise made by those suffering from one. The country of the Oktoberfest it is no surprise that there are a number of cures to quieten the cats. I’ve heard that one method is to eat meat and bananas the next day. This could actually be quite useful as the bananas will provide sugar and potassium and the meat will help to settle a rumbling stomach.

A more traditional cure would be rollmops and beer. A rollmop, for those unfortunate enough never to have had one, is a fillet of pickled herring with some filling in the middle. As you can see there is a strong link in folk cures for hangovers and pickled foods. 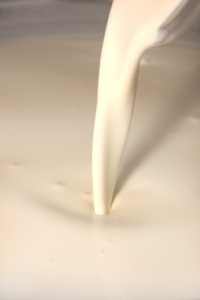 The Highland Fling is a pint of buttermilk, the liquid left over from churning butter, mixed with a little cornflour to thicken it and seasoned liberally with salt and pepper. This would be an excellent way to rehydrate. The fat will settle the stomach and the lactose will raise your blood sugar levels to wake you up. Unfortunately I was never offered one of these while in Scotland, preferring the more modern hangover cure of cold pizza and a can of Irn-Bru. The British are the binge drinkers of Europe. While we may have a staid reputation for formality  – when it comes to drinking to excess we are not ones for holding back. So what to do when a hangover hits? We have made a science of it. In 2009 the University of Newcastle announced that a bacon sandwich was the best way to get going after a heavy night of drinking. This is because bacon contains plenty of amino acids and bread, and ketchup, provide the carbohydrates you require. The salt in the bacon will replace that you lost and the fat will settle your stomach. This is merely confirmation that the great British Fry Up is one of the best medical techniques for almost any ailment.

It was also the British which perfected the art of the ‘Hair of the Dog.’ This is the drinking of alcohol the morning after to lessen the effects of the hangover. It’s name comes from the idea that the cure for a bite from a rabid dog was to place some hair from the dog that bit you in the wound. The hair of the dog really does work, for a time. This is because the metabolism of methanol, present in small amounts in alcoholic drinks, is thought to be one of the major causes of a hangover. By drinking ethanol you slow down methanol metabolism and lessen the hangover. Also the new drink will tend to have a mellowing effect. Of course, the hangover may only be delayed.