Bad guys deserve what they get from the law – but sometimes the legal system’s too slow, too soft, or just not quite metal enough. Here are ten of the most satisfying stories of criminals getting their just deserts at the hands of the public:

10
Booming Voice of Lord Stops Criminal In His Tracks 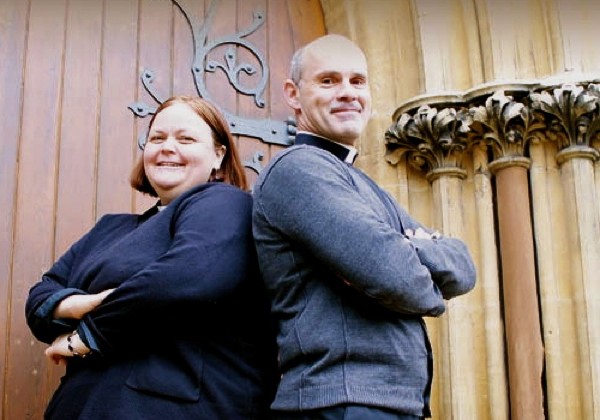 A vicar forced a would-be robber to his knees when he tried to steal from a church.

Eric McDougall, 54, was in need of some quick cash and knew exactly where he could get it: church. He was halfway through stealing from the church collection box when assistant Christine Cargill caught him in the act and cried out for help.

Vicar Andrew Cain ran valiantly to the rescue. Cain – still dressed in his vicar’s outfit – ordered the thief to drop to his knees and empty his pockets of any ill gotten gains. Seeing himself face-to-face with the well-built holy man, McDougall quickly did as he was told. 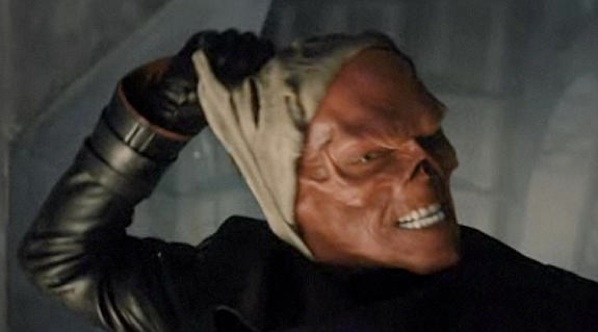 A man dressed as a Nazi super villain was apprehended by a band of Jewish vigilantes.

Armed with a gun, Kevin Crawford walked into a bank, screamed “Happy F**king Halloween!”, then stole thousands of dollars in cash.

A few minutes later, Crawford found himself surrounded by an unarmed Jewish patrol set up by the local community.

Yes, a criminal wearing the face of a famous fictional Nazi was stopped mid-robbery by a group of Jewish vigilantes. Take that, irony!

8
Robber Beaten Half to Death With His Own Shotgun 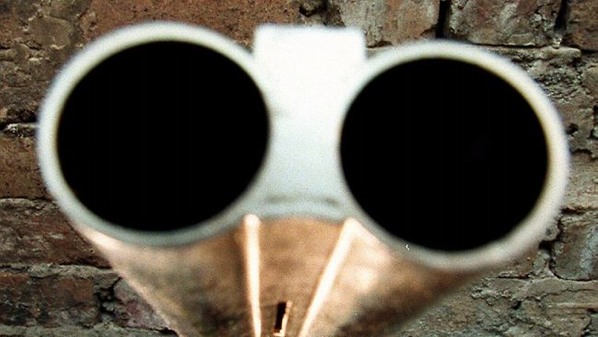 A thief was beaten up with his own shotgun.

John Columbus Beane is a crook so awful that he couldn’t rob a store with no one in it.

After scaring away the owner of pizza place with a shotgun, Beane realized he couldn’t work the cash register. He then tried again by robbing a nearby bar, which is when things got crazy.

Seconds after he entered the bar, two patrons tackled Beane, took his weapon, then spent several minutes beating him over the head. Police responding to his first robbery soon arrived and took him to jail, where he presumably fell down a flight of stairs in true Police Academy fashion. 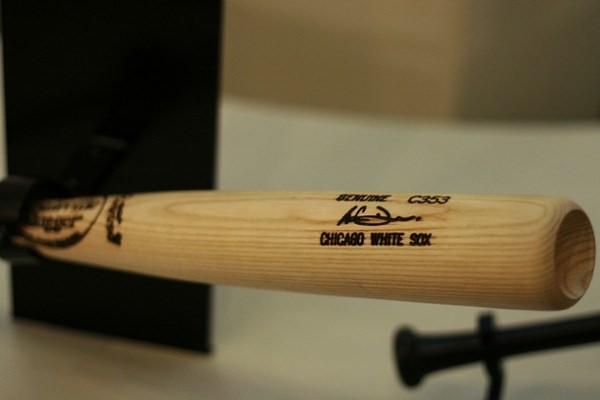 An angry mob pursued – and thrashed – a would-be robber.

Juan Rodriguez was sitting in his shop reading the Bible when a crook with a knife walked in, demanding money. Juan, being a possible Crocodile Dundee fan, grabbed a knife of his own. After having second thoughts, he upgraded to a baseball bat and chased the thief out of the store.

Some members of the public soon joined in the chase. Soon a whole mob of concerned citizens was beating the hapless criminal to a pulp. It actually got so bad that Rodriguez, in a heroic change of heart, jumped on top of the crook to protect him from the hail of punches that he almost certainly deserved. 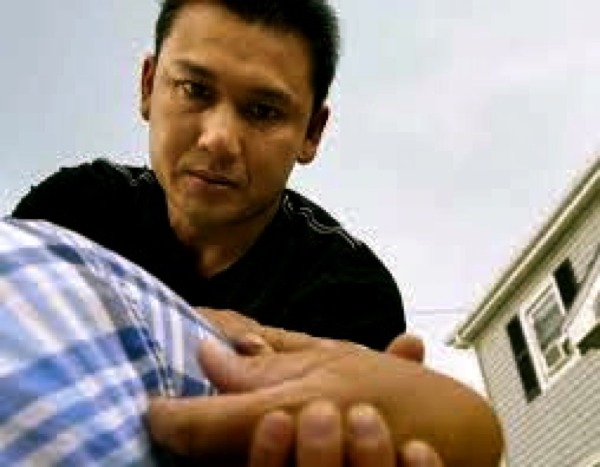 Seiha Hak ignored a gun aimed at him to prevent a robbery.

Seiha Hak was on holiday when he saw armed men robbing a store. Hak saw that children were in danger, and hammered on the store door demanding to be let in – only to find himself face-to-face with the barrel of a gun.

Thinking on his feet, Hak grabbed a tiny plank of wood and beat the gunman about the head, before putting him in a martial arts hold until the cops arrived. 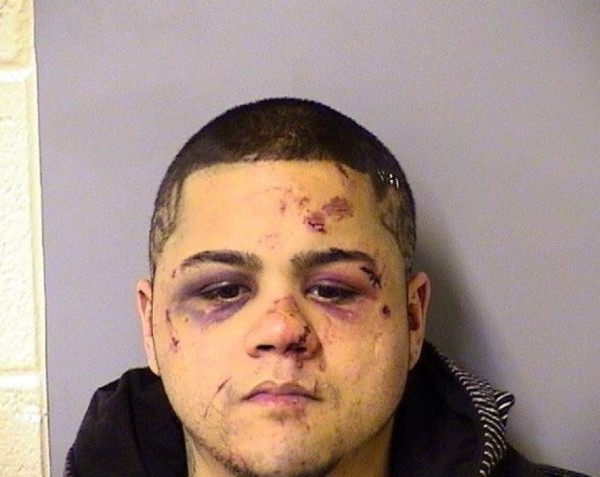 A man known only as “Justin” gave one mugger more than he’d bargained for.

Anthony Miranda must have felt pretty tough when he put a gun to the head of a man known only as “Justin” and demanded every penny he had. Justin gave up the cash – and if the mugger had walked away at that point, he wouldn’t be on this list.

But criminals aren’t all that bright, which is why they think waving guns in the faces of highly muscular men with thick Eastern European accents and no last names is a good idea.

Only seconds after ordering Justin out of his car, Anthony found himself lying on the floor with a bruised face and a bullet from his own gun lodged in his ankle.

During an interview, Justin wouldn’t give any details about himself, other than “high-risk training,” “hostage rescue” and “former military”. The most surprising thing about this entire story is that Anthony Miranda wasn’t declared legally blind after picking this guy for a mugging. 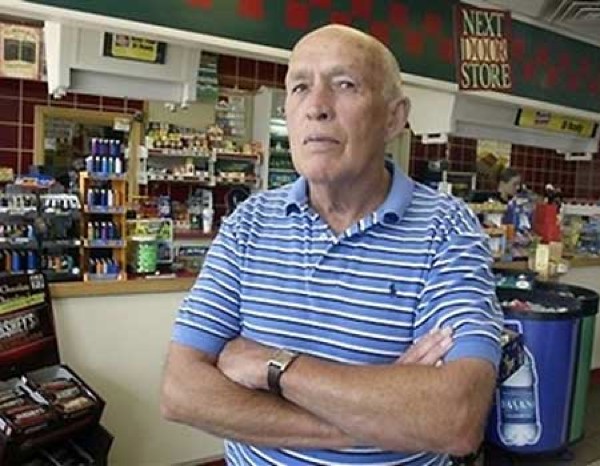 A 72-year-old veteran “went marine” on a pickpocket.

Bill Barnes, 72, was checking a lottery ticket when he felt a hand working its way into his front pocket. Realizing that someone was trying to steal the $300 he had in there, Barnes called upon something the thief did not expect: decades of military training and boxing experience.

Quick as a flash, the elderly man spun around and threw a flurry of punches into the face of 27-year-old Jesse Rae.

When asked why he went into full-on military mode, Barnes replied; “I just didn’t want to get in trouble with my wife for someone taking my money.” 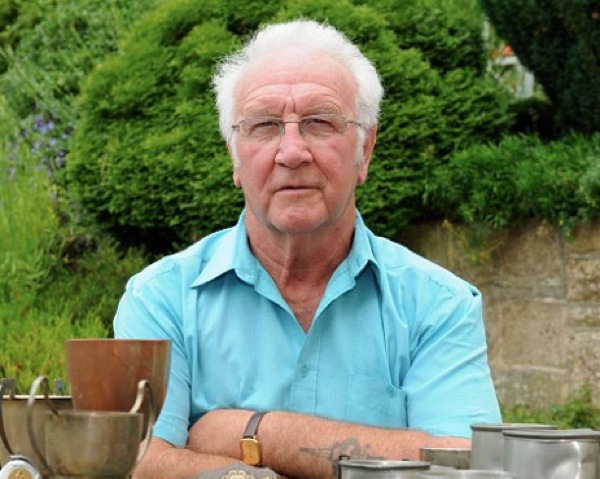 A retired boxer’s fists were more than a match for the knife of an intruder.

Frank Corti was enjoying the fruits of his retirement when, out of nowhere, 24-year-old Gregory McCalium ran into his house and started threatening to knife Corti’s face.

Corti, showing absolutely no fear, rushed his attacker and delivered two right hooks – with so much power that the local police likened the state of the burglar’s face to that of a car accident victim. Corti insisted in interviews that he wasn’t a hero, and that most people would have reacted in the same way.

Sure, Frank – most people would have punched their knife-toting attacker hard enough to have the police liken his face to a crime scene. Whatever you say. 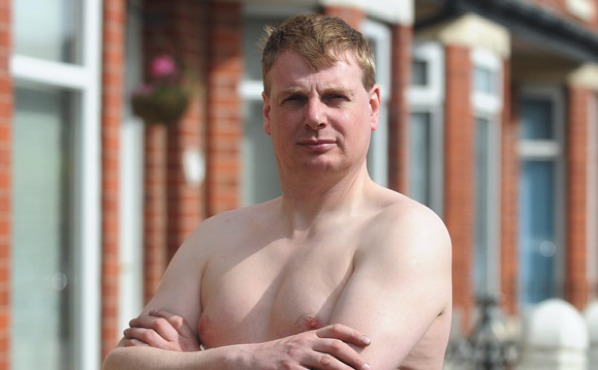 A naked soldier punched a burglar – through a car window.

The veteran soldier Wayne O’Mahoney, 41, woke up one night to the sound of three masked criminals ransacking his home. Hearing Wayne get up, two of the criminals bolted down the street, while the third grabbed Wayne’s keys and tried to steal his car.

Wayne sprinted towards the car, and – disregarding knife the thief was waving at him – punched clear through the car’s window and into the thief’s face. He did this while completely naked. You see, Wayne likes to sleep in his birthday suit.

The criminal – evidently realising he was going to be slapped to death by naked man – ran for his life. Wayne went back inside, presumably to call 999 before putting on a pair of pants.

Two men wearing dresses turned out to be cage fighters.

Dean Gardener, 19, and Jason Fender, 22, were out drinking – and what better way to celebrate a few drinks than by hitting random strangers in the face for no other reason than to prove that you’re a real man?

The pair were seen by CCTV cameras stumbling down the street, jeering at anyone within earshot. Unfortunately enough, they then crossed paths with two men in dresses.

Dean Gardener strode up and sucker punched one of the men; seconds later, the man’s friend returned the favor by punching Dean and Jason with so much force that they both collapsed in a heap of testosterone and urine.   As it turns out, both men were cage fighters on their way to a friend’s engagement. This explains why they quickly scooped up their purses and walked away, rather than kicking their assailants’ kidneys into a fine paste.