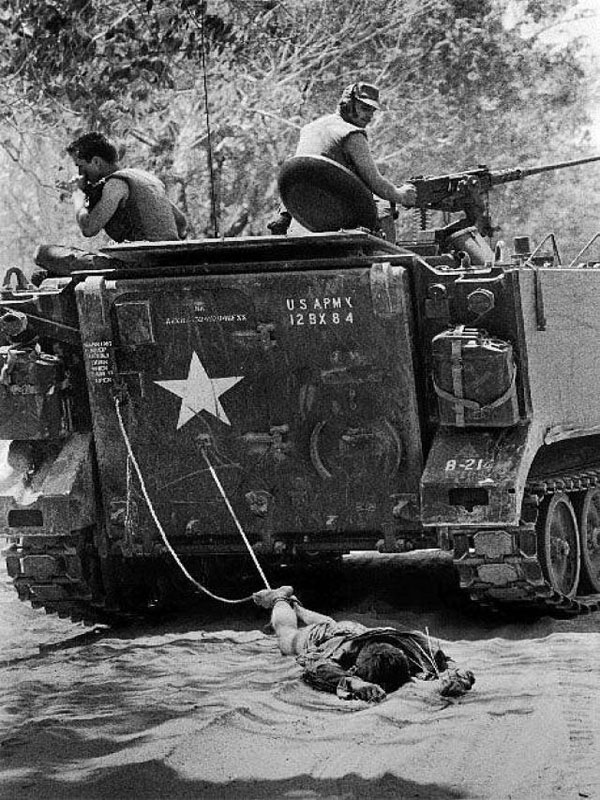 This picture was taken in South Vietnam in the aftermath of the Battle of Long Tan. The Viet Cong were repelled after launching a night attack on Australian forces, and the Viet Cong soldier in the picture is one of the casualties.

This photograph shows the indifference toward brutality that marks many of those who spend too long in a warzone. The publicity of the photo was a significant blow to Western pro-war sentiment and morale. 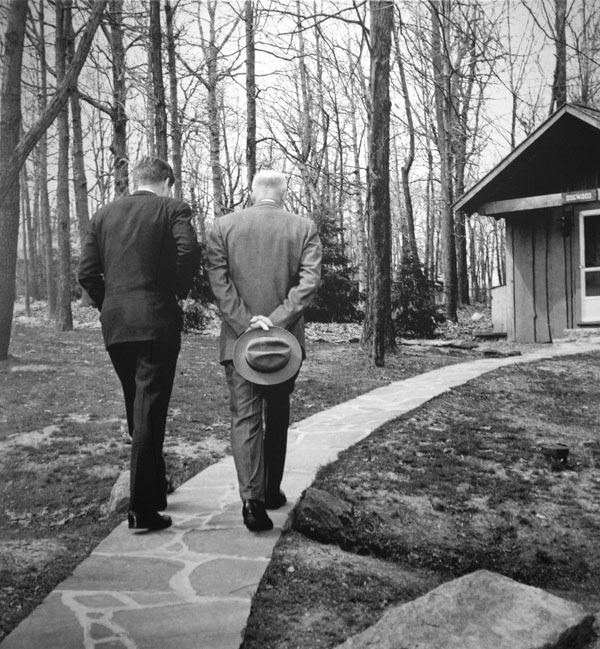 President John F. Kennedy and former president Dwight D. Eisenhower are having a wintertime walk at Camp David in winter. Kennedy has just asked Eisenhower what he thinks of the botched Bay of Pigs Invasion. Vathis claims that immediately before the question, both men had been holding their heads high. 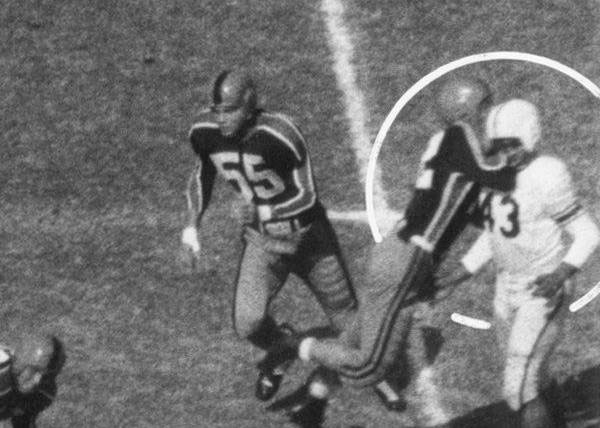 Six photos were taken of the deliberate on-pitch assault on African-American Johnny Bright, a college football player for the Drake Bulldogs.

While the referee chose to interpret several violent (and ultimately jaw-breaking) tackles as merely part of the game, these photos proved otherwise. The sequence of six photos show that the rival player did it deliberately. The motive is obvious and odious enough, but what is truly atrocious is the lack of response from the rival player’s university, Oklahoma A & M. The offending player was never punished in any way, despite the national attention the photos drew to the incident. 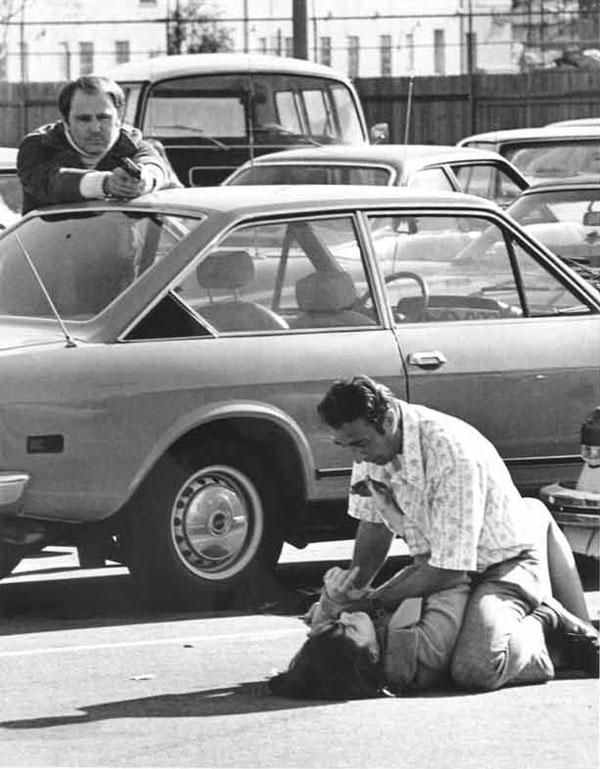 Roberts was walking through a Hollywood parking lot in the afternoon when he heard the screams of a woman. He found a man on top of her, attempting to subdue her with punches and slaps. Roberts was unarmed except for his camera, and so he shouted to the man that his picture had just been taken.

The man shouted back that he didn’t care—and continued to beat the woman as Roberts watched helplessly. This commotion finally brought a security guard, who told the man to stop—but when he continued wrestling with the woman, who was screaming for her life, the security guard leveled his pistol across the roof of a car and shot the man in the head, killing him. Roberts’ final photograph shows the instant before the guard pulled the trigger. 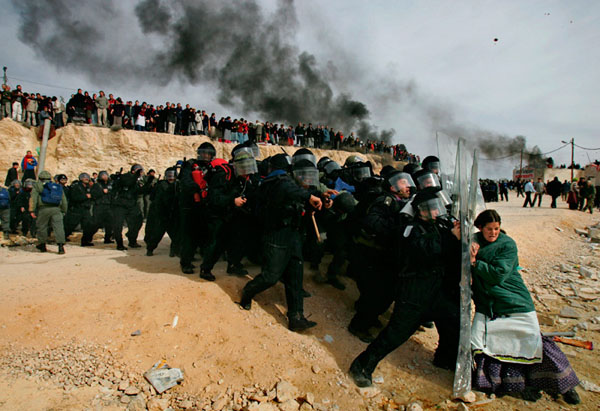 This photograph was taken in Amona, in Israel’s West Bank. Israel’s government considered Amona to be a camp of illegal settlers—whether Israeli citizens or not—and 10,000 policemen were ordered to forcibly remove its inhabitants.

A single Jewish woman stands in angry defiance against an army of police officers dressed in full riot uniforms. They are attempting to shove her out of the way in order to set up demolition charges on the houses behind her. She was finally pushed over backward and nearly trampled as they passed. Balilty claims that the woman then grappled momentarily with some of the men before chasing after them, shouting curses in Hebrew. 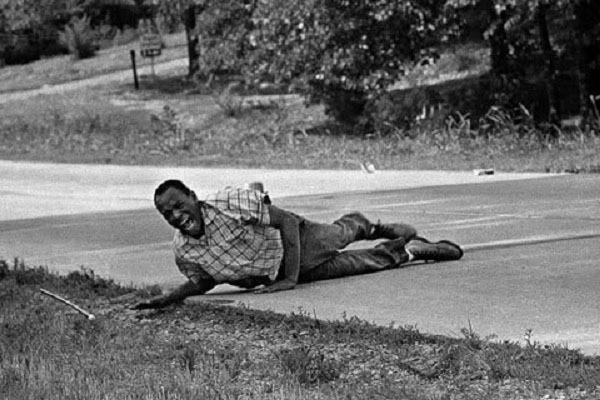 James Meredith, a prominent civil rights activist, was leading a march when he was sprayed in his back with birdshot. The shooter was a man called Aubrey Norvell, who had reportedly shouted, “I just want James Meredith!”

Miraculously, none of the sixty-three birdshot pellets struck a vital organ or broke Meredith’s spine, even though the pattern wounded him from head to buttocks.

In the picture, Meredith is lying on the street in agony. He cried out, “Isn’t anyone going to help me?” No one did, but the photographer Thornell shouted that he should stay calm, and that an ambulance was on its way. Meredith was taken to a hospital where the pellets were extracted, and he healed well enough in two days to finish the march before it reached Jackson. Norvell pled guilty, and spent his time in prison regretting that he had not used buckshot. 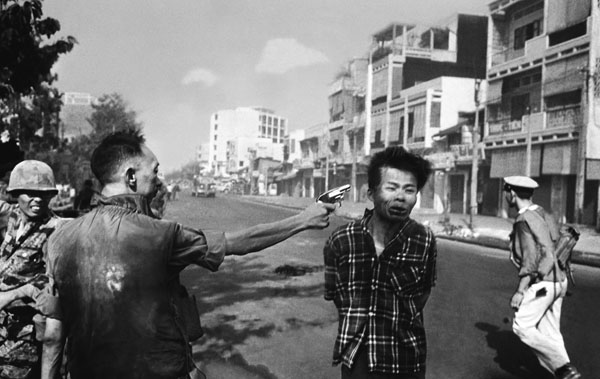 This is one of the most infamous photographs ever taken. The photographer Eddie Adams would later regret being on the scene at the time, because his photograph would go on to destroy the lives of the gunman and his family. He is Nguyễn Ngọc Loan, a Major General in the South Vietnamese Army, and the National Chief of Police.

What you don’t see in the photograph is the reason Loan was executing the prisoner. That man is believed to be Nguyễn Văn Lém, a local Viet Cong officer who had been operating a gang of murderers bent on killing all the local police officers in that area of Saigon. He was responsible for arranging the drive-by shootings or hit-and-runs of dozens of policemen—and if they themselves could not be attacked, he targeted and murdered their families instead.

So when he was finally caught and brought before Loan, the Chief of Police calmly unholstered his revolver and shot Lém in the temple, killing him instantly. Adams had no idea what he was about to photograph. He claimed that this picture destroyed all American pro-war sentiment. 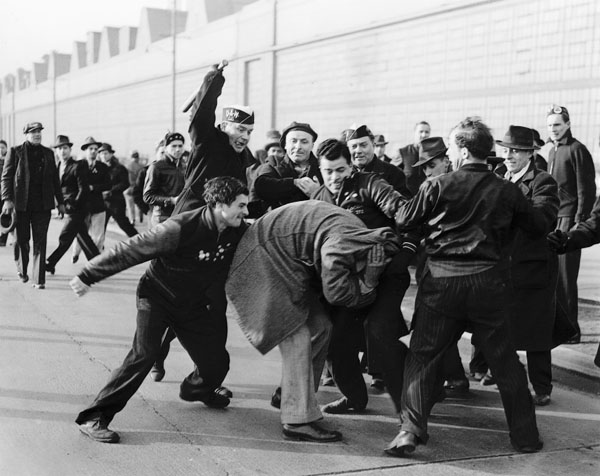 In 1941, workers at the Ford Automobile Plant in Detroit, Michigan, went on strike. The workers wanted higher pay, but the plant had refused. A strikebreaker attempting to break up the crowd was beset on all sides by workers who beat him badly. He tried to protect himself by pulling his coat over his face.

Milton Brooks snapped the picture and then quickly hid his camera and ran away. He claimed that the strikers beat the man some more, and then shoved him away so that they could continue protesting. 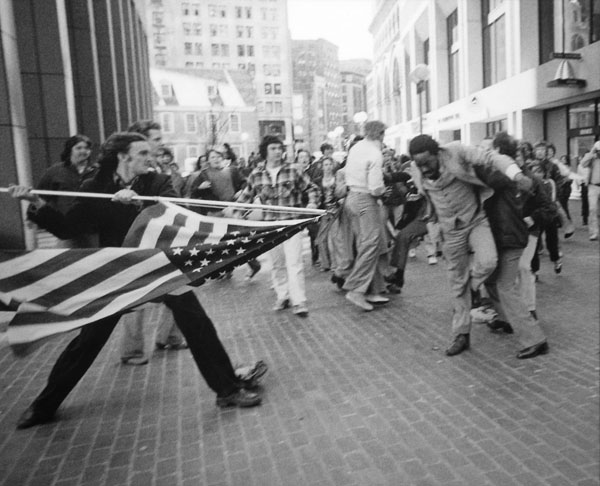 The desegregation of buses in Boston, Massachusetts, was ordered in 1965—and by 1974, protests against this reform had become a severe and widespread problem. In 1976, Stanley Forman took a photograph that summed up the entire crisis: it shows the black lawyer and civil rights activist Theodore Landsmark being attacked by a white teen named Joseph Rakes, who has armed himself with—of all things—an American flag. 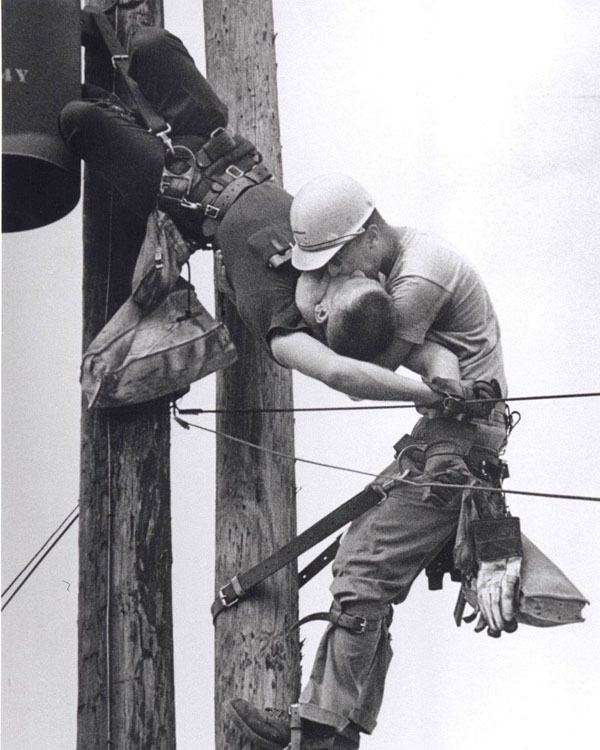 This photo shows two power linemen, Randall Champion and J. D. Thompson, at the top of a utility pole. They had been performing routine maintenance when Champion brushed one of the high voltage lines at the very top. These are the lines that can be heard “singing” with electricity. Over 4000 volts entered Champion’s body and instantly stopped his heart (an electric chair uses about 2000 volts).

His safety harness prevented a fall, and Thompson, who had been ascending below him, quickly reached him and performed mouth-to-mouth resuscitation. He was unable to perform CPR given the circumstances, but continued breathing into Champion’s lungs until he felt a slight pulse, then unbuckled his harness and descended with him on his shoulder. Thompson and another worker administered CPR on the ground, and Champion was moderately revived by the time paramedics arrived, eventually making a full recovery.