Everyone has heard tales of people living in abandoned mines, caves, or subway tunnels. Or maybe you’ve read the book The Time Machine and recall the Morlocks, who lived beneath the earth. What a lot of people don’t realize, is that subterranean cities have not only existed . . . in many cases they have thrived. 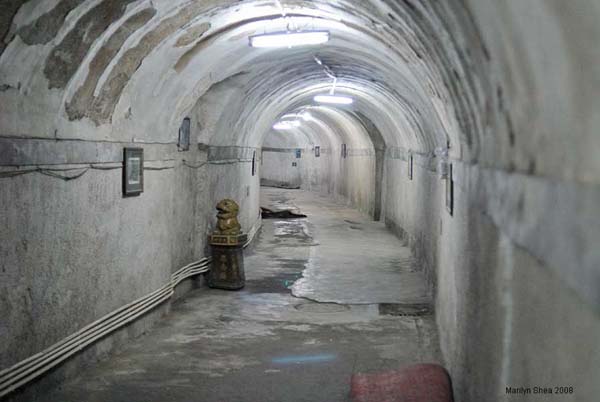 Beginning in 1969 and continuing through the next decade, Mao Zedong ordered the construction of an emergency shelter for the socialist government. It was located beneath Beijing—stretching 30 kilometers. The giant city was built during the Sino-Soviet border war for the main purpose of military defense.

Within the city were stores, restaurants, schools, theaters, barbershops, and even a roller skating rink. The underground city also featured over 1,000 air raid shelters, and it was built to house up to forty percent of the Beijing’s population in the event of an attack.

Amazingly, there are rumors that every home had a secret trapdoor to allow the citizens to quickly retreat to the great underground complex. In 2000, the giant city was officially opened up as a sort of tourist attraction, and some of the shelters are actually used as youth hostels. 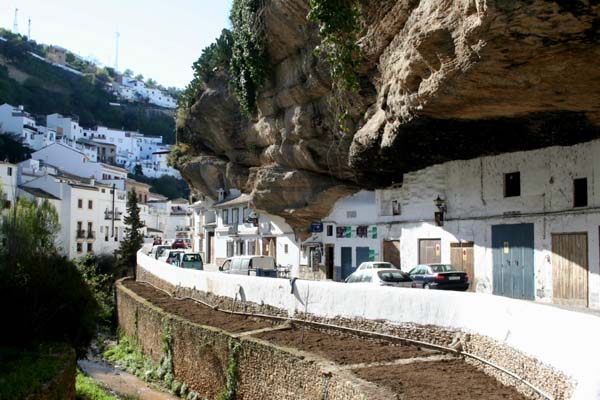 Unlike most of the cities on this list, Setenil de las Bodegas continues to thrive and is home to more than 3,000 people. The houses are built directly into the stone walls—not entirely underground—in the mountains of this Spanish town.

Much of the town is built out in the open, and it remains a fascinating place to visit to see the incredible carved structures. The town has served as a Moorish fortification, and was used similarly by the Roman Empire. 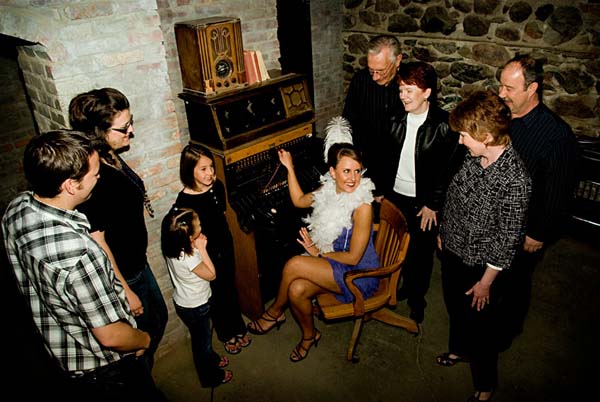 Moose Jaw is located in Saskatchewan, Canada, which means winter lasts an awfully long time. Not surprisingly, it was just as cold in the early twentieth century, which led to a series of tunnels being constructed beneath the city to allow warm travel for the workers. Considering the time period in which this took place, it should not come as a surprise that this underground network was soon being used for illicit purposes.

The tunnels of Moose Jaw were put to use by mobsters and bootleggers, because it was the era of Prohibition. Where illegal alcohol exists, gambling and prostitution soon follow, and soon enough the underground city was turning into a mini Las Vegas. It’s said that Al Capone was heavily involved in all of this illegal activity, which gave rise to the tunnels being nicknamed The Chicago Connection.

7
City of the Gods, Giza Plateau 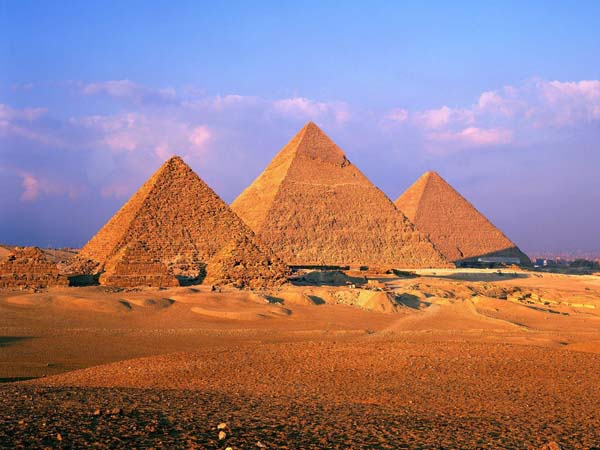 The Great Pyramid of Giza is the only wonder of the ancient world still standing. In addition to being an architectural marvel, some believe that beneath the Giza Plateau exists something almost as extraordinary: a massive series of underground tunnels and chambers.

Beginning in 1978, researchers began to map out a massive underground complex that they referred to as a potential “metropolis.” Known as the City of the Gods, it is still shrouded in mystery. Considering this vast underground city is directly beneath one of the most important historical structures in the world, it is not likely that its mysteries will be easily unlocked for the foreseeable future. Furthermore, many vocal opponents to the theory of the City of the Gods claim that they don’t exist and are a pseudoscientific idea invented to support the notion of alien gods. 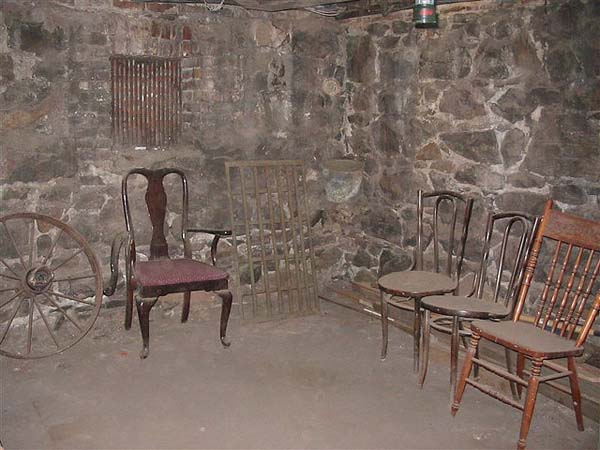 Beneath one of the largest cities in the Pacific Northwest region of the United States lie the Shanghai Tunnels. They are located beneath Chinatown and were used to transport goods and, legend has it, people. Thanks to this giant underground infrastructure, Portland gained notoriety as the worst place on the West Coast of America for Shanghaiing—kidnapping men for forced labour aboard ships.

The Shanghai Tunnels, also known as the Forbidden City, are believed to have been used for other illegal activities such as prostitution. Today you can tour the tunnels with a significantly smaller risk of being shanghaied than in the past. 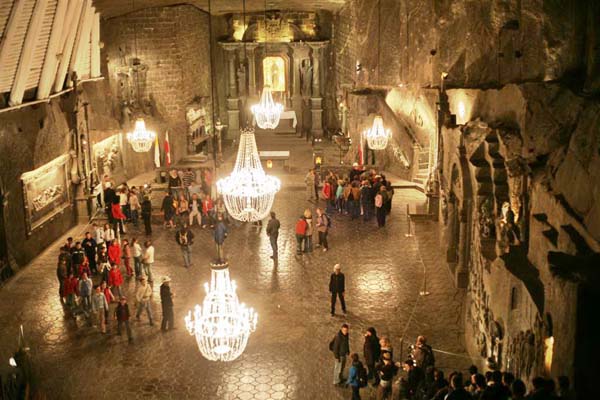 Wieliczka Salt Mine—located in the south of Poland—was built in the thirteenth century. The mine produced salt until 2007, making it one of the longest running salt mines in history. In addition to producing tons of our favorite food additive, the mine was also home to a massive underground complex that included statues, chapels, and even a cathedral.

The mine itself is immense—measuring186 miles (300 km) in length. During World War II, the mine was used by the Germans for building munitions. It contains an underground lake and sees over one million tourists per year. 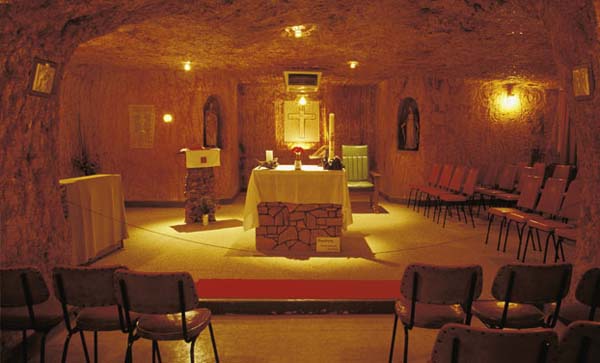 Like Setenil de las Bodegas, the town of Coober Pedy still exists and is home to more than 1,600 residents. It is referred to as the opal capital of the world because it produces more opal than anywhere else on Earth. The town consists of homes called “dugouts,” which were built underground to combat the unbearable heat on the surface and to keep their babies safe from dingoes and Australians.

Ever since opal was first discovered in Coober Pedy in 1915, the area has continuously been occupied and mined for the gemstones, and chances are if you own anything with opal in it, it came from the Coober Pedy mines. Along with the dugout homes and mine shafts, the town boasts underground shops and pubs, as well as a church, and even a graveyard. 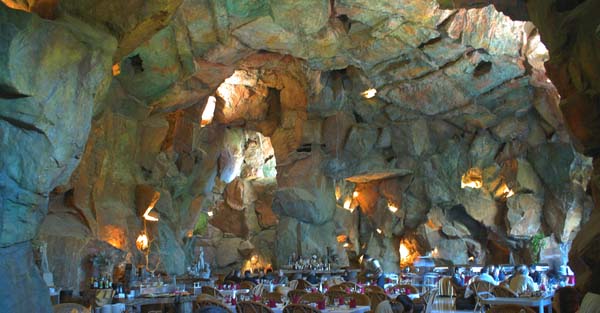 Beneath Kish, in Iran, lies a mysterious city that is in fact so mysterious, it doesn’t have an official name. It is called various things, including Kariz, but is most commonly referred to by tourists simply as the Kish underground city. The city is more than 2,500 years old and was initially used as a water management system.

Of course, like so many other ancient things, the underground city has been renovated and there are plans to turn it into a modern tourist destination. The new version of Kariz will include restaurants and shops throughout the 107,640 sq ft (10,000 sq m) complex. 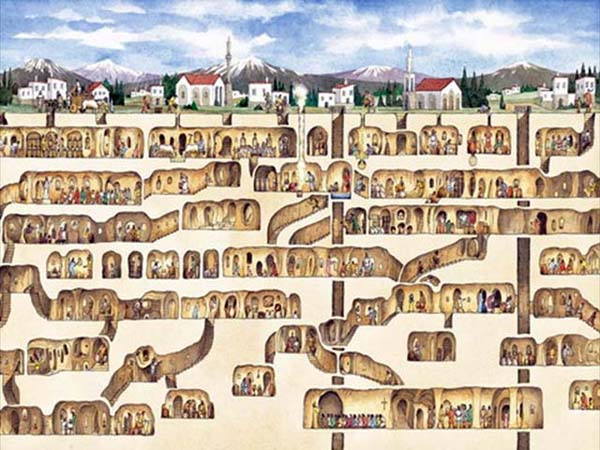 The area of Cappadocia, Turkey, has become famous for its underground cities—most notably the underground city of Derinkuyu. It consisted of seven underground levels and is said to have housed residents in the thousands. This was not a small city and it was not a series of small cave homes either. Throughout Derinkuyu were shops and churches, areas in which the residents produced wine, and even schools. The underground cities are believed to have been hiding places for Christians avoiding persecution from the Roman Empire, because no one likes being fed to lions. 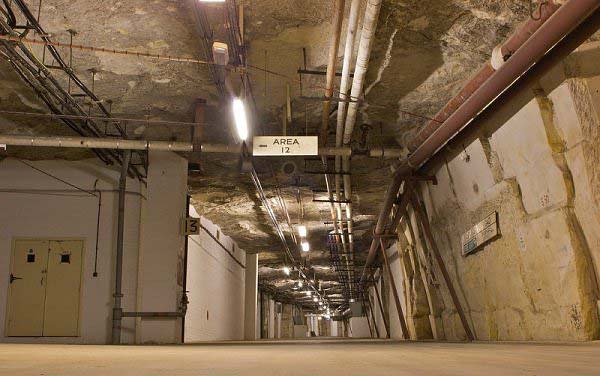 While many people have heard of Cheyenne Mountain, the not-so-secret underground government facility in the United States, not nearly as many are aware of a similar structure located underneath the English countryside. Code named Burlington, the facility was built in the 1950s to house the British government in the event of nuclear war.

Burlington was built in an old stone quarry and covered 240 acres (1 sq km), and it could accommodate up to 4,000 government officials. What it could not accommodate, however, was their families. Burlington had 60 miles (95 km) of roads, a railway station, hospitals, an underground lake, a water treatment facility, and a pub. It also had a BBC studio from which the Prime Minister would be able to address whatever was left of the population from the safe and cozy confines below the surface. Burlington was kept in working order until 1991 when the Cold War came to a close.