Some superpowers pop up over and over again in comic books: super strength; super speed; telekinesis; energy projection. Yet there’s a small pantheon of comic characters that defy these well-trodden clichés, and boast powers that stretch the limits of the superhero genre.

We’re going to steer clear of “joke characters” (such as Arm-Fall-Off-Boy and The Color Kid), “godlike” characters with undefined powers, and one-shot characters—within those boundaries, here are the strangest superpowers that you’ll find in comics. 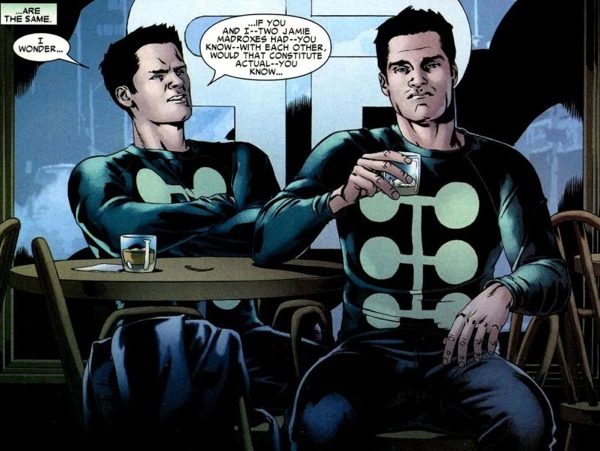 Jamie Madrox—otherwise known as the Multiple Man—is a mutant with the ability to create perfect duplicates of himself by absorbing kinetic energy. Each duplicate is capable of independent thought and action, and Madrox can also copy items and clothing that he’s wearing.

What makes this power truly strange is that the original Jamie, Jamie “Prime”, can absorb these duplicates back into himself at will, gaining the memories and experiences of the duplicates in the process. Jamie Prime is able to survive the death of a duplicate, and can even use his power as a form of healing (when an injured duplicate merges with another, the new copy will only have half the damage). 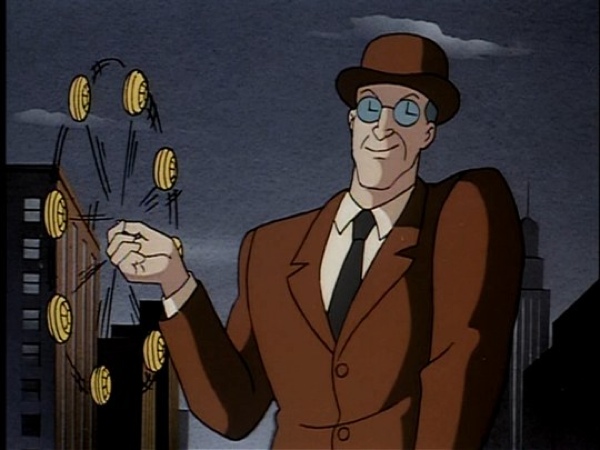 The Clock King is a Batman foe with no superpowers — except for his uncanny ability to perceive and manage time. While he has also been known to use highly-advanced, clock-inspired weaponry in his crimes, Clock King’s real strength lies in sensing patterns and the “temporal plane.” For example, he’s so adept at remembering train schedules that he was able to plan a perfect escape from a robbery by leaping off a bridge onto a moving train.

A master tactician—he once helped to coordinate a successful raid on the Justice League Watchtower—Clock King is also able to put his time management skills to use in the fighting arena. Imagine being able to time exactly how long it takes for a foe to throw a punch; Clock King does this with ease, allowing him to dodge the incoming fist/foot/knife over and over again. 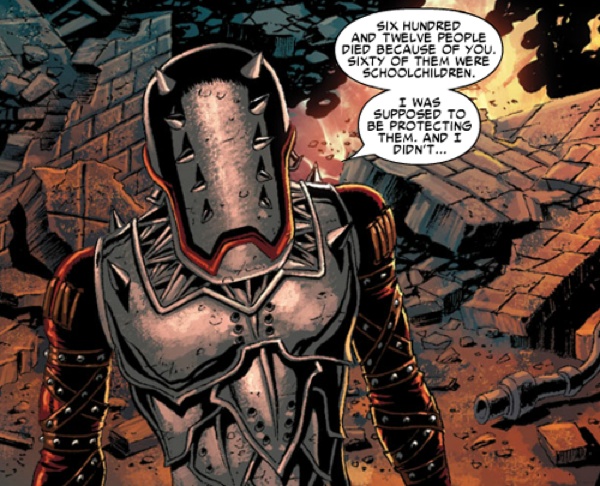 A superhero formerly known as Speedball, Robbie Baldwin is now known as Penance, one of the most masochistic characters in comics.

As Speedball, his powers were pretty ordinary: generating a kinetic field of energy that could propel him into battle. So far, so boring. But following a tragic accident during Marvel’s Civil War storyline, Baldwin was injured so severely that his powers evolved . . . and that’s why he’s on this list.

As Penance, Baldwin can only use his powers when he’s in “physical duress”—meaning in excruciating pain. To help stimulate his powers, he built a truly terrifying-looking S&M style suit, complete with internal barbs and spikes that constantly rake his flesh.

Probably not a superpower you’d wish for, but badass nonetheless. 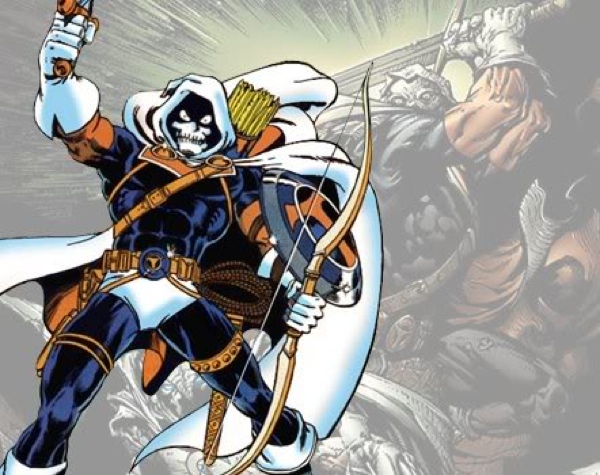 While the ability to “learn” may not seem like much of a superhuman ability, a closer look at this out-of-the-ordinary superpower might make you think twice. Using his skill to learn at a mind-numbing (for us!) speed and ability, Taskmaster is one of the most formidable foes in the Marvel universe.

Able to absorb knowledge instantaneously, Taskmaster can use muscle memory to replicate the movements and abilities of other superheroes and martial artists. Using these “photographic reflexes,” the Taskmaster has become highly skilled in various forms of combat by mimicking the martial arts skills of Elektra, Iron Fist and Shang-Chi, the swordsmanship of Black Knight, Silver Samurai and Swordsman, the marksmanship of Captain America, Hawkeye, Punisher, and Bullseye, as well as displaying a strenuously honed athletic ability (Black Panther, Daredevil, Spider-Man). Once the Taskmaster has mastered an opponent’s physical movements, he can then predict his opponent’s next attack. 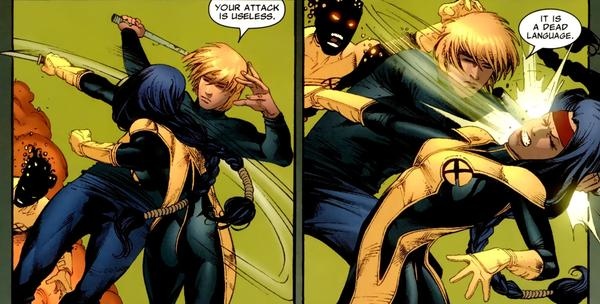 Another “superhuman learner”, Cypher puts his skills to use in a different way: understanding languages.

Cypher is a mutant who is able to intuitively understand, translate and read all languages. This ability alone makes him invaluable as a translator and diplomat, vastly underrated abilities in the superhero multiverse, where extraterrestrials and mystics routinely rub elbows with international assassins and government heads of state.

But it’s when we examine this ability closer, that we truly see the power of being able to understand any language. Cypher is able to decipher codes and understand computer languages (he has been able to speak in binary and hack into electronic systems). He’s able to read his opponents’ body language and predict the patterns of their combat moves. His language skills are so evolved that he is able to “read” the architectural structure of a building and figure out how to bring it down. 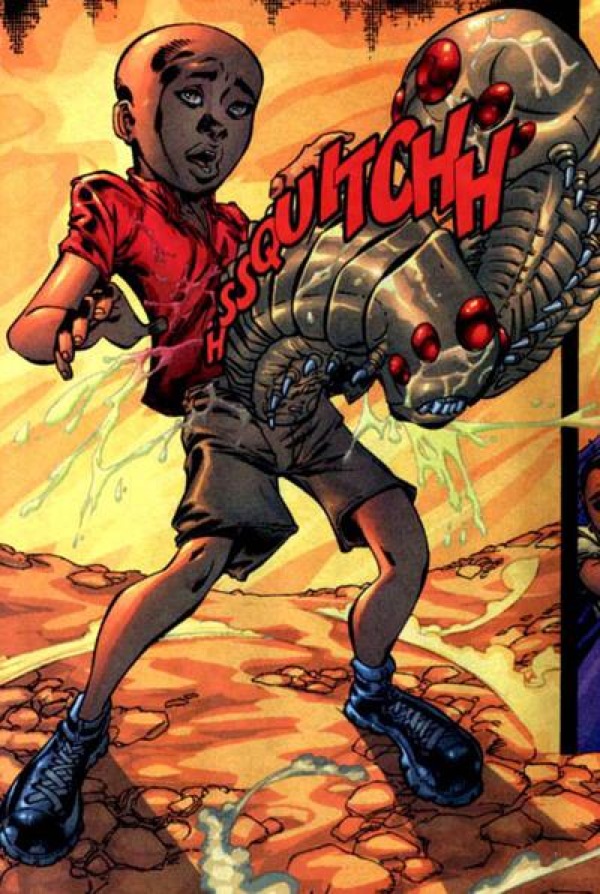 Briefly a member of the X-Men, the mutant known as Maggott has a hollow digestive cavity housing a pair of semi-sentient slugs, which are able to bore their way out of his torso and use a powerful enzyme to digest any solid object in their path at super-speed, transmitting the energy back to their master. Maggott then uses this energy to supercharge his physical size, strength, stamina and sturdiness. 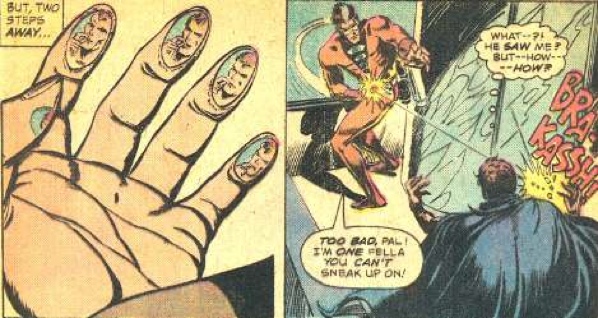 In our attempt to keep “joke characters” off this list, we struggled with the decision to include The Ten-Eyed Man. But in the end, DC Comics has treated him too seriously for us to discount him as a joke . . . just listen to the poor guy’s origin story.

Philip Reardon was serving as a soldier in the U.S. Special Forces in Vietnam, when a grenade fragment hit him between the eyes. Returning to civilian life, he got a job as a security guard at a warehouse. After a robbery gone wrong—for which he would end up mistakenly blaming Batman—Reardon’s retinas were burned in an explosion, compounding his war injury and blinding him permanently in both eyes. A brilliant surgeon managed to reconnect Reardon’s optic nerves to his fingertips, enabling him to “see” through his fingers, and The Ten Eyed Man was born.

Reardon used his 360-degree vision to augment his Special Forces military training, and swore bloody revenge on Batman. When Batman inevitably dominated him and The Ten-Eyed Man was sent to jail, his hands were locked in a special box to keep him “blind” 24 hours a day. 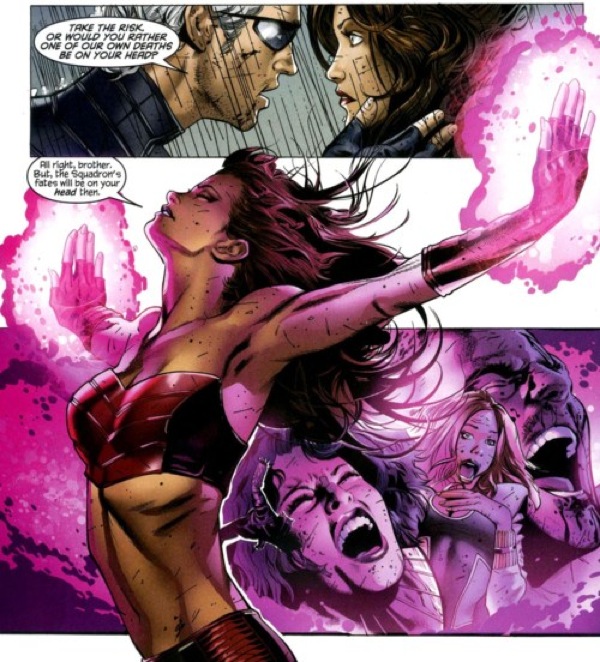 The daughter of Magneto and the half-sister of Quicksilver has one of the most unique powers in the Marvel universe: the ability to manipulate probability. Using what she calls “hexes”, Wanda Maximoff is able to force a range of low-probability events to occur at exactly the right—or wrong—times.

In the past, The Scarlet Witch used her hexes to light flammable objects, contain or remove air from a particular area, deflect objects, stop the momentum of projectiles, open doors, explode objects, create force fields and deflect magical attacks. The effects of her powers vary, but are almost always detrimental to opponents, such as causing the Evil Eye to work against inter-dimensional warlord Dormammu, the robot Ultron to short circuit, or a gas main underneath the Brotherhood of Mutants to explode.

Recently, the character has been revamped to suggest that Wanda has the power to influence reality itself, arguably making her one of the most powerful characters in the Marvel universe. 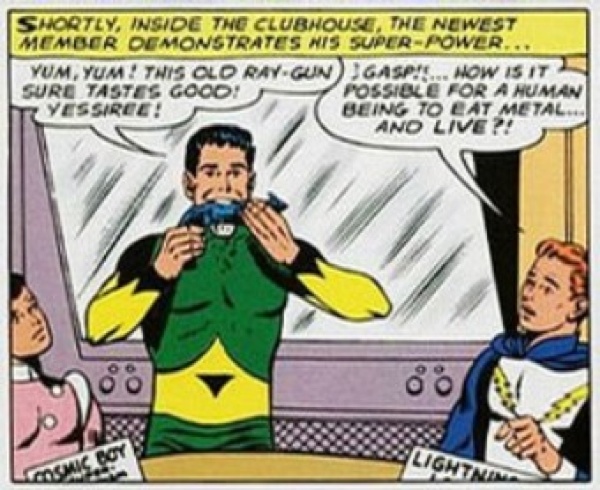 Tenzil Kem from the planet Bismoll has the ability to eat almost any amount of matter in virtually any form. That’s right . . . his superpower is eating. Matter-Eater Lad is capable of eating sulfuric acid, prison bars, broken glass, hot lava—you name it, he’ll eat it. He once helped his comrades dig an escape tunnel by eating his way underground.

Matter-Eater Lad is another character we considered keeping off this list, but he’s actually an entrenched character in the DC Universe as a member of the Legion of Super-Heroes. He even managed to save the universe in Superboy and The Legion of Super-Heroes #251, by eating the “indestructible” Miracle Machine—and paid the price when he went insane from its energies for several months.

That’s gotta count for something. 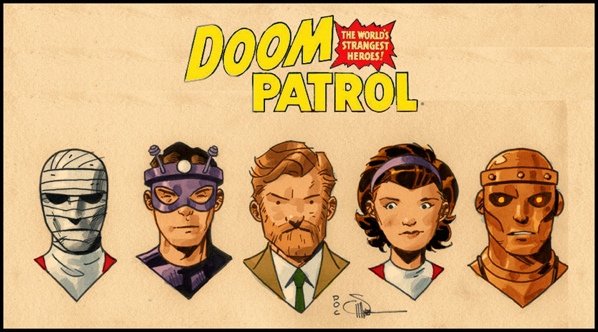 What list about weird superpowers would be complete without the Doom Patrol, one of the most misunderstood and alienated superhero teams to ever make it to the printed page?

A team of super-powered misfits whose powers often cause them tragedy and alienation, the Doom Patrol first appeared in My Greatest Adventure #80 (June 1963), and quickly established a reputation as being one of the strangest titles on the mainstream market. While at the time most “uniquely powered”comic book characters were done as quirky satires of the industry, The Doom Patrol’s angst-ridden and mentally imbalanced crew were part of one of the first books to insinuate that superpowers could be terrifyingly abnormal. The book really took a turn for the surreal when Grant Morrison assumed writing duties after issue #19 of the 1980s Doom Patrol relaunch, and began to incorporate elements such as Dadaism, surrealism, and the cut-up technique pioneered by William S. Burroughs and Brion Gysin.

The collection of strange and unique superpowers in The Doom Patrol books is probably enough to warrant its own list. Here are just a few of the characters and abilities that Doom Patrol writers have come up with over the years:

The Quiz: a Japanese woman with a fear of dirt, The Quiz had every power you’ve never thought of. To make her lose a power, you had to consciously think of it.

Crazy Jane: Has sixty-four multiple personalities, each with its own set of superpowers.

Danny the Street: a living, sentient “place” that can teleport itself to any location.

Love Glove: able to visit the otherworldly “Glove Tree,” where he can select super-powered gloves that range from the “Shove Glove” to the “Techno Glove.”

Ambush Bug: his most interesting power is the ability to realize he is in a comic book, making him one of the few comic book characters that will break the “fourth wall” and speak directly to the reader.

Mr. Nobody: slowly drains the sanity of everyone around him.

The Animal-Mineral-Vegetable Man: Can turn any part of his body into any kind of animal, vegetable or mineral, including multiple parts at the same time.

Eric Kiefer is an author/musician, and a huge comic dork. His writing and music can be seen on his website, www.TheKiefer.com, as well as on Facebook, YouTube, and the rest of the digital zeitgeist.