Quick—are you dreaming right now? How do you know? After all, lots of dreams are pretty mundane, and you spend an awful lot of time reading lists, so it could certainly be that this website seeped into your subconscious. Or, perhaps reality is totally skewed all around you right now, but since your brain effectively turns off its logic circuits while you’re dreaming, you just can’t tell how weird everything is. Well, you’re probably not dreaming. But if you happened to find yourself standing in any one of the following places, you’d have a damn tough time convincing yourself of that. 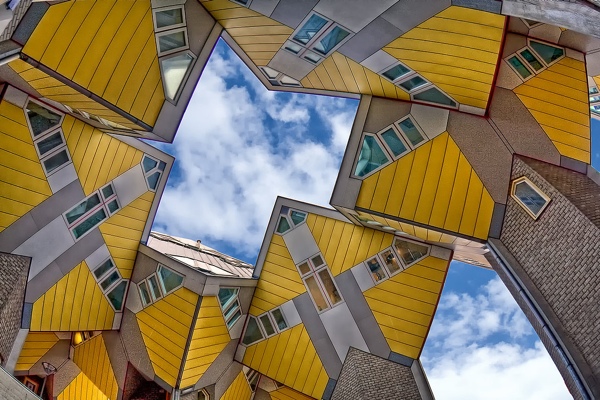 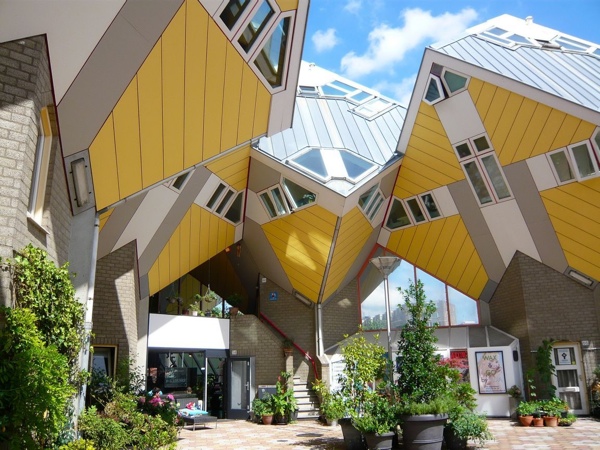 Dutch architect Piet Blom is best known for designing this complex in Rotterdam, the Netherlands, which he envisioned as a forest with every structure being a tree. Mr. Blom apparently had a very, very different view of forests than most people. Built in 1984, the Kijk-Cubus or cube houses are occupied by their owners and used as either homes or business. One is kept open to the public so it’s well worth a visit. 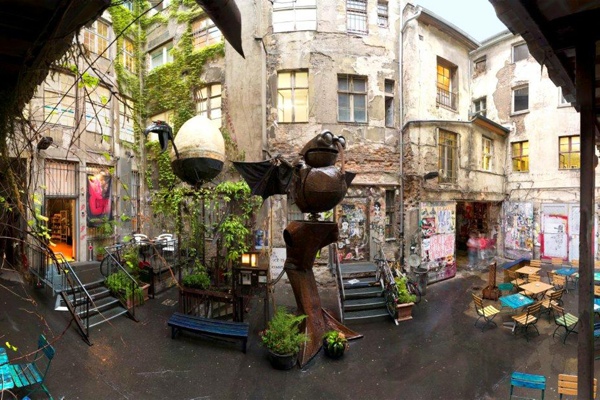 Part of many underground tours in Berlin, one doesn’t have to speak German to get the meaning behind Monster Kabinett. Maintained by an art collective known as the Dead Pigeon Collective, it is simply an entire warehouse full of insanity located in a dark alley. There are robotic installations and sculptures resembling malformed faces, giant insects and other bizarre creatures. Prior to the collective taking it over in 1995, the building had stood vacant since it was used to hide Jewish families from the Nazis in the ’40s in secret rooms that are still untouched, adding an extra layer of creepiness. Visitors could be forgiven for assuming they’d fallen asleep watching Nine Inch Nails videos, only to dream they are inside one. 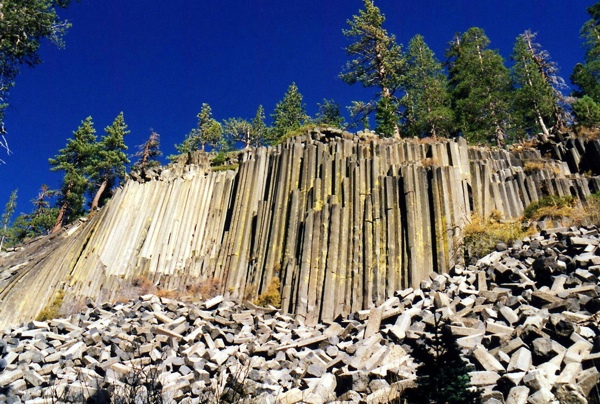 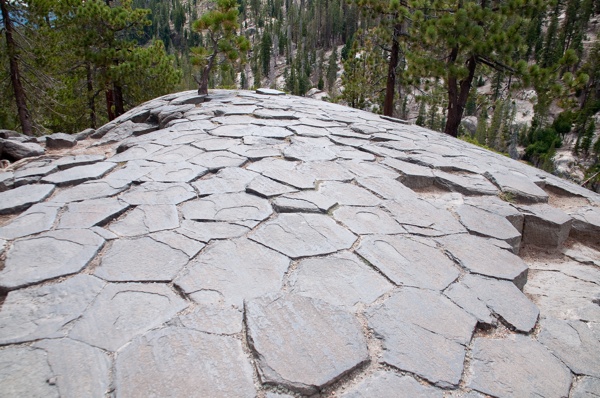 The geological formation known as the Devil’s Postpile is the largest known example of a columnar basalt. This type of formation happens when basaltic lava forms a lake, cools slowly, and cracks along stress points. The formation is six stories high and displays highly unusual symmetry. Almost as strange is the giant pile of identical looking pieces at the bottom, which could easily be named Devil’s Lego. 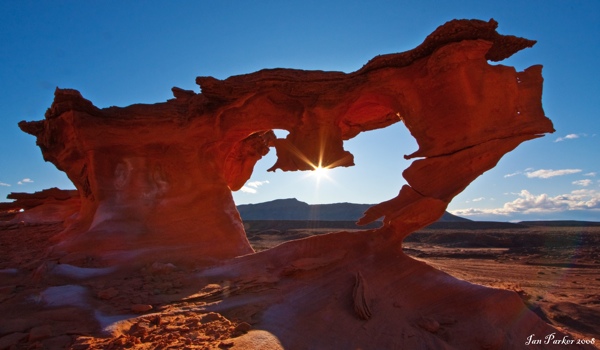 These red sandstone formations in Nevada are truly bizarre—millions of years in the making—and caused by that magical combination of wind and water (heavy amounts of both, which explains the lack of plant life). The landscape here doesn’t just melt and run—it appears to be alive. Distorted profiles of weird creatures, disembodied fins and faces and all manner of dreamlike weirdness awaits you at Hobgoblin’s Playground, which is also known as Little Finland. 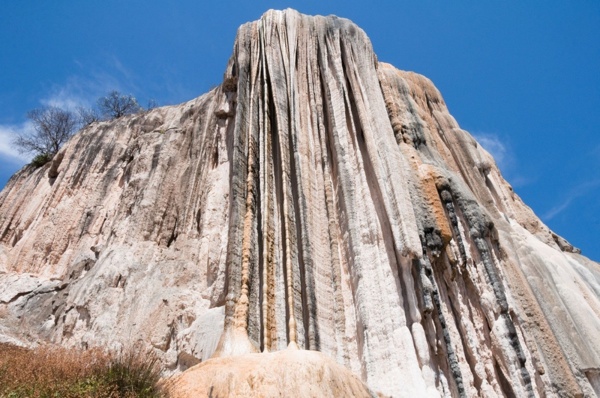 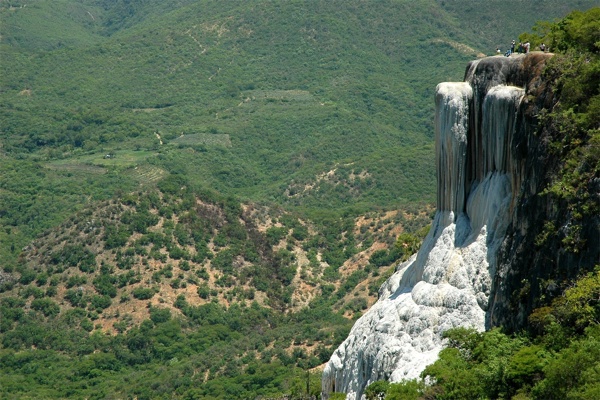 At first glance, this looks like a frozen waterfall, which is kind of impossible, especially in such a moderate climate as the south of Mexico. It actually is a waterfall of stone, which is several orders of magnitude more impossible, but here it is; above the tourist attraction of Hierve el Agua (The Water Boils) in Oaxaca is what really looks like a petrified waterfall. The main tourist draw here are the natural mineral springs, and they are also the reason for this surreal geological formation. There was once an actual waterfall at the site, where the water is so rich in minerals that a whole bunch got left behind. 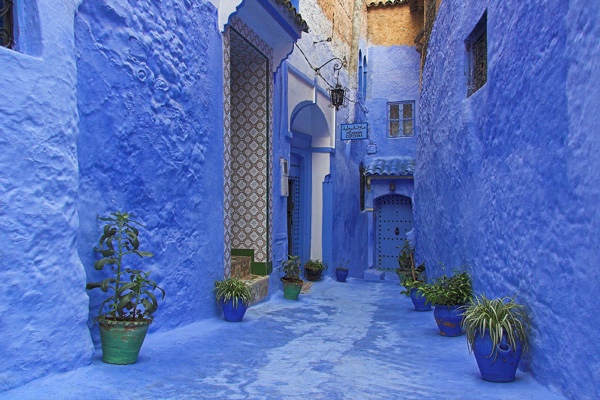 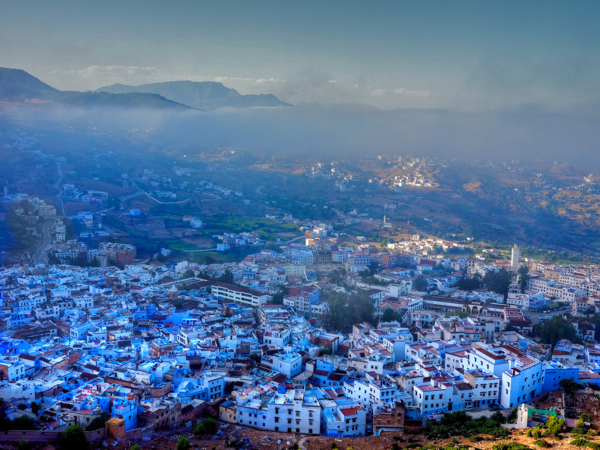 Chefchaouen is a popular Moroccan tourist destination due to its proximity to Tangiers. It is named for the twin mountain peaks that overlook the town—its name translates roughly to “look at the horns.” Chefchaouen is notable not for its twin peaks but for another reason—everything is blue. And we mean pretty much everything.

In a tradition started by Jewish settlers in the 1930s, practically every house and building in the entire town is painted in various shades of light blue and it’s not uncommon to see residents outside with paintbrushes, touching up the blue on their houses. It’s a pretty tiny town where most roads lead to the Central Plaza or Plaza Uta el-Hammam. The region is also one of the chief producers of cannabis in Morocco—how many more reasons do you need to visit this incredible place? 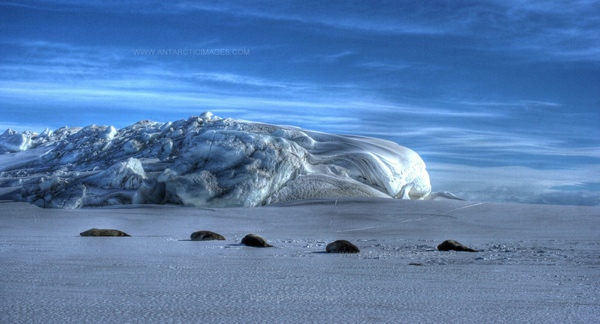 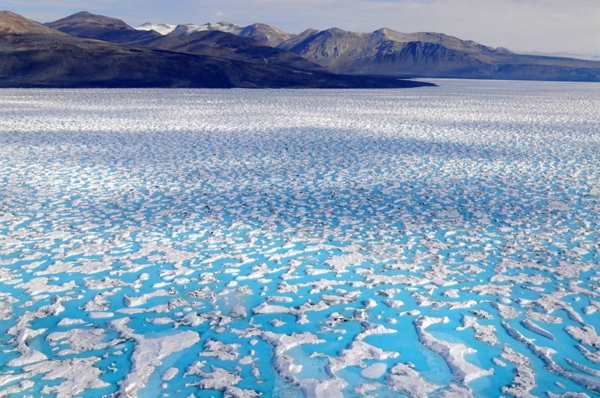 Many scientists think that primitive life began on ice shelves much like the one in McMurdo Sound in Antarctica. Researchers in this region must deal with long stretches of permanent and semi-permanent day and night, which must mess with one’s sleep pretty badly. We imagine this can cause enough complications during waking hours without the entire landscape looking like something out of a dream.

The effect seen above is caused by several different types of ice—glacial ice, marine ice, and the surface stuff—being present on the snow-covered surface of the ice shelf, combined with wind erosion. The same effect is known to be be caused by various psychotropic drugs—LSD, marijuana, mescaline—being present on the surface of one’s brain, combined with reality erosion. Neither of these things—tons of drugs, coldest temperatures on the planet—are terribly safe, so if you find yourself here you’d better hope it is actually a dream. 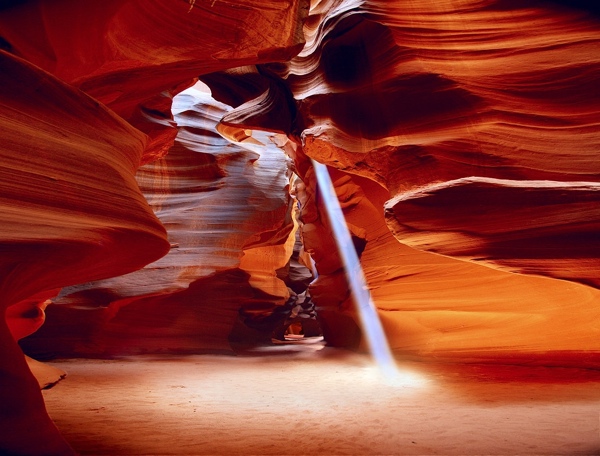 Antelope Canyon is a slot canyon, which is a narrow crevice caused by quickly moving waters. Its Navajo name is Tse’ bighanilini (place where water runs through the rocks). Carved from the same sandstone mentioned earlier, the result is an extremely fluid looking environment. The small amount of natural light contributes to the otherworldly feeling, and there are places where beams of light illuminate small portions of otherwise gloomy basins. Needless to say, photographers and filmmakers love the place—but you have to go with a guide, who is there to prevent damage to the surroundings and perhaps to stop you losing your mind. 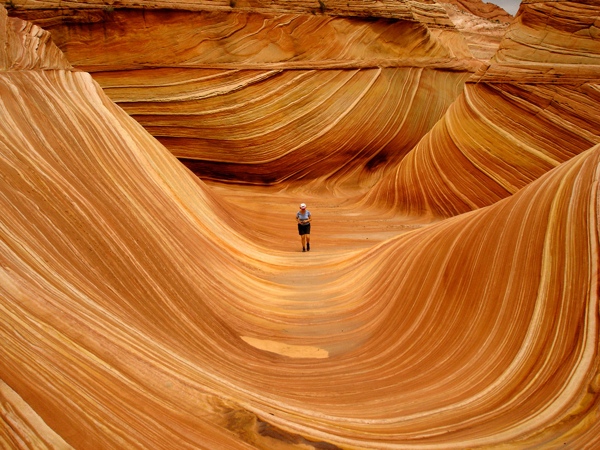 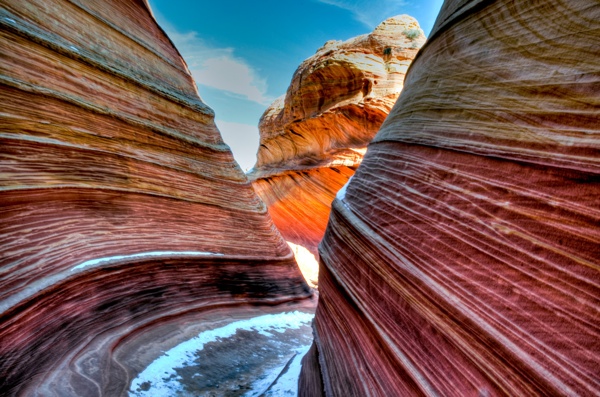 There is a place in the Arizona desert where ancient sand dunes—layer upon layer of them buried underground for millenia—came to the surface a few million years ago. Water erosion revealed iron and mineral deposits that are wind smoothed over the surfaces. The result in the present day is a mind-bending landscape that your brain may outright reject if you were to stumble across it.

Of course, that wouldn’t be easy—the Bureau of Land Management doesn’t exactly herd visitors out to what is commonly known as The Wave on account of the person-killing heat and how understandably easy it is to get lost in the area. 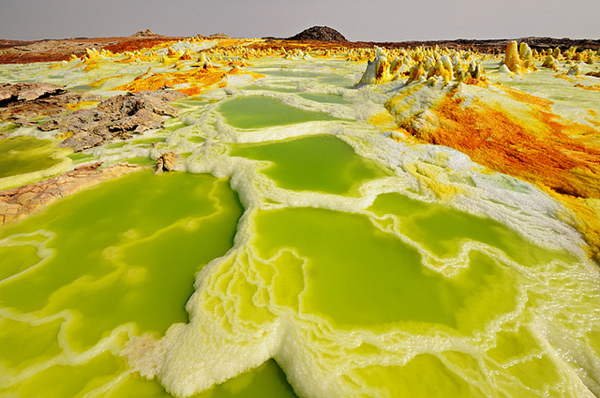 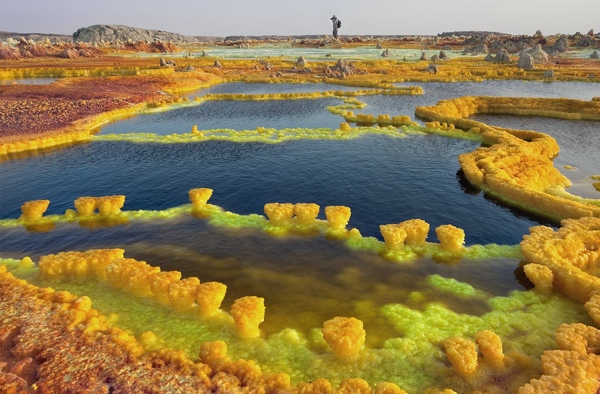 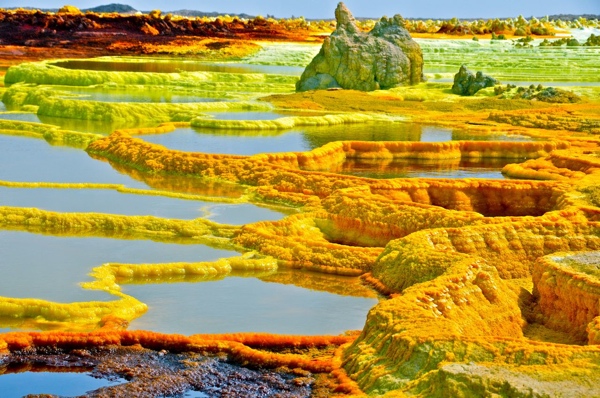 In the desert of Ethiopia, in a very sparsely inhabited region, lies a volcanic crater surrounded by an abundant variety of minerals. Sulfur, salt, iron, and ocher abound. There are also acidic pools and hot springs—all things associated with volcanic and geothermal activity. Nothing out of the ordinary here, except . . . this.

All of these things combine to produce an absolute riot of colors and formations that nobody associates with nature: Some areas look like snow-covered plains. Some look like mountains with the hue setting tweaked to hell. And some look like pools on the surface of the moon. The area is seldom visited or photographed for good reasons—toxic fumes are often present as a result of all the weird chemical combinations, and it happens to regularly record the highest average temperature in a notoriously hot area. Its name, in the local language, means disintegrated, which aptly describes one’s sense of reality when laying eyes upon this place.

Floorwalker can be harassed on his blog or followed around on Twitter.