Dedication, a willingness to work hard and ridiculous amounts of patience are just a few of the traits photographers need. Every now and then, it all pays off with the perfect shot. Most of these photographs show unquestionable photography skill. Others are the direct result of the type of sheer luck that gives people an excuse to play the lottery. And all of them capture something wonderful at just the right moment, preserving it forever in a single frame, however improbable it might be. Here are 10 stunning photos snapped at just the right moment. 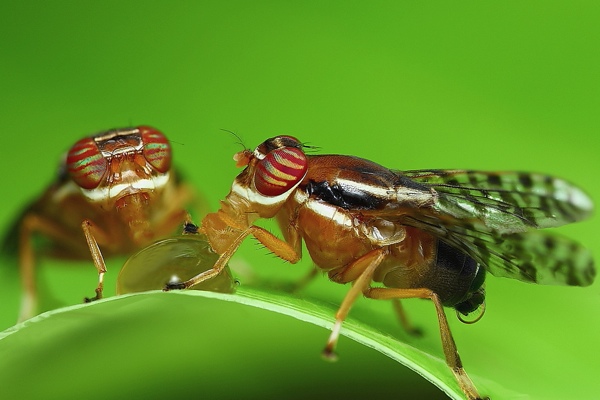 The common housefly beats its wings between 200 and 300 times every second. When they find food, they walk around on it first because the tiny hairs on their legs taste it to make sure its good. While doing this, they’re constantly in motion to make themselves a more difficult target for predators, and their eyes—which can see in 360 degrees at once—stay on the lookout when they finally settle in to eat, because that’s when they’re most vulnerable.

In light of that, this already stunning photograph becomes even more incredible—a high resolution macro shot of two flies slurping their way through a plump dew drop is a one in a million shot. 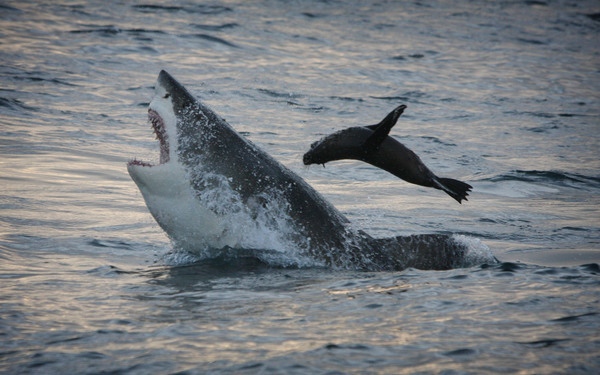 For a photo of two glorified fish flopping out of the water, this picture is surprisingly gripping. It was taken by Dan Callister off the coast of South Africa on Seal Island, otherwise known as the Ring of Death. At a certain point every year, seal populations on the island bloom, and with them come their most tenacious predator—the great white shark.

As hundreds of baby seals take to the water for the first time, the great whites hunt them in a method unique to this particular occasion—they circle near the surface, then dip down and strike from underneath, moving so fast they launch into the air with, hopefully, a seal in their mouth.

But in this rare instance, the seal juked. The shark is rising out of the water, mouth open for the catch, while the seal gracefully backflips out of harm’s way. You’re almost rooting for the seal, cheering him on in his fight against this mighty onslaught of muscular death. 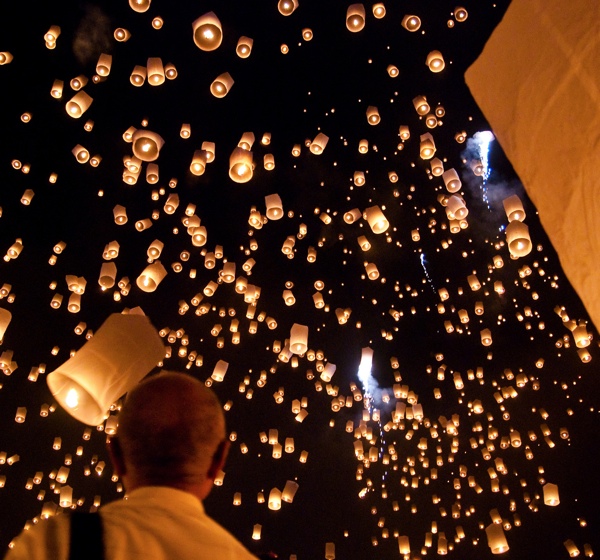 Yi Peng is a yearly festival that takes place in northern Thailand that often coincides with the Loi Krathong festival. During Loi Krathong, floating candles and flower baskets are set loose along the riverbanks to please the river spirits. During Yi Peng, however, the floats take a different form—tiny balloons made from rice paper and heated by a candle. The hot air from the candles makes the balloons light enough to float into the air, resulting in thousands upon thousands of bright orange lights filling the night skies. At first as they rise they resemble an army of luminescent jellyfish, and as they float higher they become tiny points of light, a sea of man-made stars. 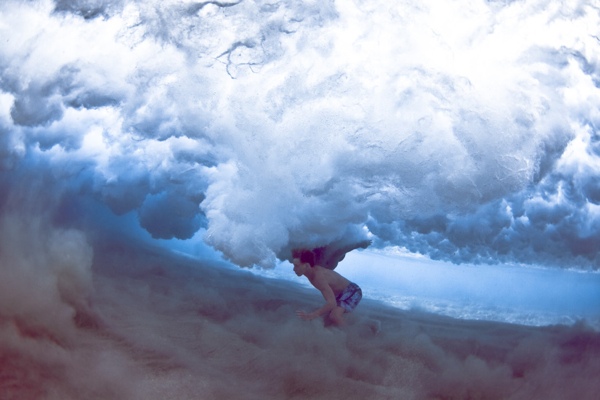 A wave tumbles towards shore at a public beach in Sydney. From above the view is commonplace, but under the surface, the world is in chaos. A cylindrical tsunami of foam roars towards the shore, pushed down by gravity, held up by the water below, rolled into a tube by the opposing pressures. Invisible forces rip sand off the seabed and spin it in a vortex, filling the void as the wave dances onward in search of dry land. And in the middle of it all, a tiny strip of smooth water provides a refuge for a teenage boy caught between the whirling sand at his feet and a storm cloud of boiling froth surging over his head.

This is the photography of Mark Tipple, an ex-surf photographer who wanted a different vantage point. So he set out to capture a world nobody ever sees—the underbelly of an ocean wave. His website has dozens of other photos equally as striking as this one.

6
A Snowy Owl Catching Its Prey 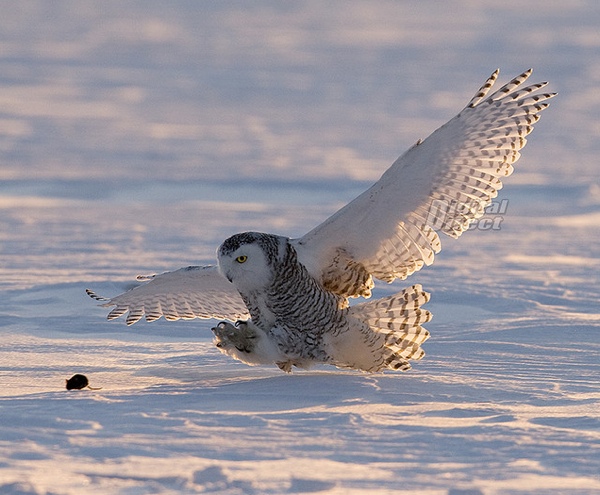 The precarious balance between life and death is a stark reality in the wild. One moment you’re foraging for food, the next moment a pair of talons digs into your back and you’re lunch. This photograph of a snowy owl swooping in for the kill by Michel Roy perfectly captures that balance. The mouse is still calm, unaware that death is coming in fast, only inches away.

Snowy owls live mostly in the tundra of North America, ranging throughout Northern Canada and Alaska. In years when prey is plentiful, they can lay nearly twice as many eggs at a time. And like most owls, they swallow their prey whole, regurgitating the bones and fur a few hours later. This picture is so incredible because at the time the photo was taken, the owl was likely traveling at speeds nearly 50 mph (80 km/h).

5
Waterspout on the Adriatic Sea 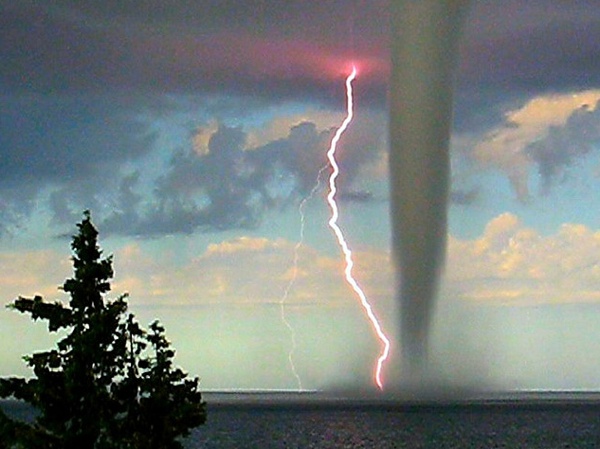 Waterspouts are a relatively rare phenomenon, but capturing one on film isn’t necessarily difficult—you just have to be there when a waterspout forms. On the other hand, snapping a picture of a waterspout at the exact moment a bolt of lightning streaks out of the sky is a little more impressive.

This jaw-dropping photo was taken on the Adriatic Sea in Croatia. Although it may look like it, waterspouts don’t actually suck water up to form the spout—the funnel is actually formed by water droplets falling down from the cloud.

4
The Waves Of Porthcawl Pier 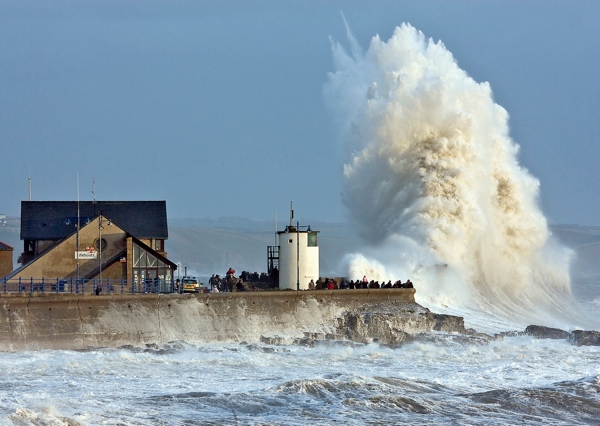 On the southern coast of Wales sits a sleepy little town known as Porthcawl. With its beaches and fishing spots, Porthcawl is a fairly popular tourist destination, and one of the historic attractions is the Porthcawl pier and lighthouse, erected in 1860. In reality, the pier is not actually a pier—it’s a breakwater, which is more structurally sound and used to defend coastal towns from crushing waves. And when a storm sets in, those waves can reach epic proportions. The Porthcawl pier is a real testament to its builders, since it’s been battered by the sea for a century and a half and it’s still standing.

And this photo paints a perfect image of the sheer force of the waves slamming into the breakwater. How high is that wave? It’s hard to tell, but there’s a lighthouse in there somewhere. 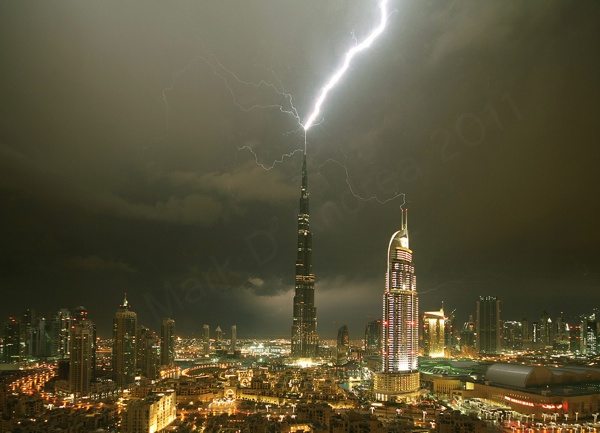 The Burj Khalifa is a skyscraper in Dubai, and currently holds the record for being the tallest building in the world. At a breathtaking 2,722 ft. (829.8 m), it stands head and shoulder above anything else in the city, and that makes it the perfect target for one thing: lightning.

Unfortunately, it only rains in Dubai about 25 days a year, and thunderstorms are few and far between. So when lightning does strike, the chances of being there ready for it are even more slim. Yet, somehow, Mark D’Andrea still managed to capture this perfect shot of a bolt of lightning striking the very top of Burj Khalifa. No, this photo isn’t Photoshopped. Those are actual beads of water, suspended on the strands of a spider web so thin you can barely even see it. The photo was taken by Andrew Osokin, a Russian photographer who specializes in macro shots. His gallery has an entire series of water droplets delicately balanced in nature, along with some pretty incredible photos of insects. The site is in Russian, but fortunately the beauty of his photography doesn’t need to be translated. In 2011, South Sudan became independent from Sudan. In 2012, it then became a refugee camp for more people fleeing from the war in Sudan. It’s estimated that over 35,000 people relocated to South Sudan every month, but there simply weren’t enough water resources to go around. By June of 2012, it’s estimated that as many as 10 people were dying a day from sheer dehydration, and entire camps would often have to trek over 15 miles (25 km) to reach a water source.

In this powerful photograph, four South Sudanese children are clustered around a water spigot, eagerly waiting their turn for a few handfuls of precious water. Who knows what their situation was. Maybe they hadn’t had so much as a drop of water since the previous day. Maybe water was plentiful in their area. Whatever their specific case may be, this photo by Steve Evans captures the hardships faced by thousands every day in South Sudan.