We rightfully fear internal attack by parasitic worms, and look upon mosquitos, leeches and mites with disgust. These stereotypical parasites are just mere “bugs”, small invertebrates that attack their host. In fact, far more dreadful and shocking creatures prowl this Earth, looking for a host. These are the macroparasites: Full sized animals that glom on to other species, including humans. Prepare to look at the shark that acts like a leech, the blood sucking starling, and the surprisingly dangerous Lamprey. 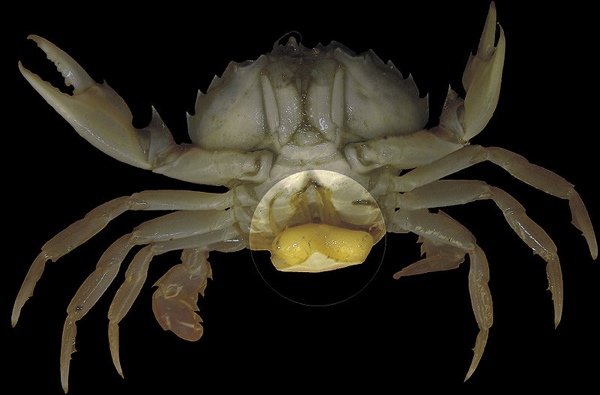 We all dislike the encrustations of barnacles on ships and the cuts we receive on barnacle covered beaches. However, the Sacculina ranks as the most horrific macroparasite imaginable with its bizarre attacks on crabs.The female Sacculina larva finds a crab and walks on it until it finds a joint. It then molts, injecting its soft body into the crab while its shell falls off. The Sacculina grows in the crab, emerging as a sac, known as an externa, on the underside of the crab’s rear thorax, where the crab’s eggs would be incubated. After the eggs are fertilized, the female castrates the male crab, and then changes him into a female by injecting powerful hormones. At this point, the transgendered crustacean will care for the young barnacles when they emerge in their crablike form. The toxic hormones also prevent the crab from growing, and remove the crab’s ability to regenerate lost claws. 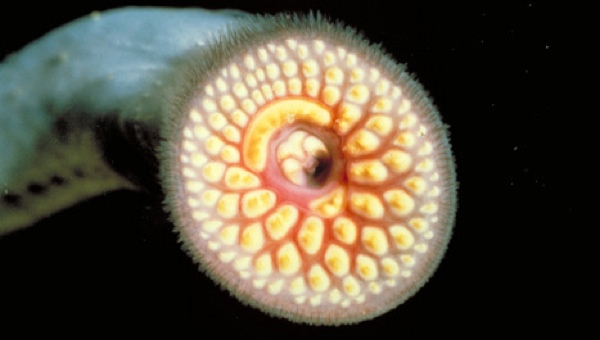 The Sea Lamprey is a jawless fish with an unearthly, terrifying appearance. Growing up to six feet in length, this cartilaginous creature possesses a round mouth opening filled with razor sharp rasps capable of ripping into the flesh of host fish. The Lamprey lies in wait for a large salmon, perch or bass, and then rushes forward, attaching itself with a massive sucker before rasping away at the flesh. The animal may remain attached for several days before dropping off, as if it were an enormous leech. Horrendous wounds caused by the Lamprey may result in secondary parasite infestations and fungal damage to the host fish. Horrifically, Lamprey invasions in lakes have seen swimmers treated for nasty body scrapes as they became the new Lamprey hosts. 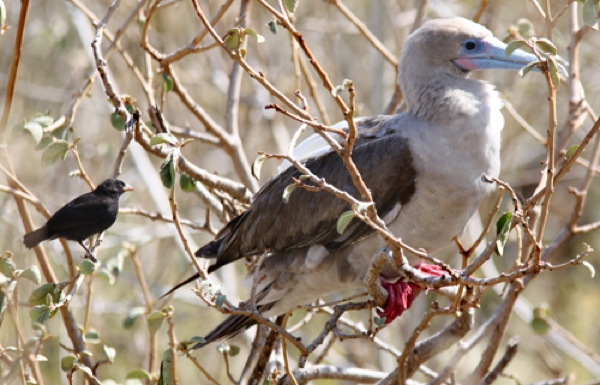 In nature, the most unexpected creatures can prove to reveal shocking insights as expected roles are reversed by the forces of evolution. The Sharp-beaked Ground Finch is a relative of the beautiful tanagers and sparrows seen in North American Gardens. However, this south American Songbird is a testament to the flexibility of evolution in turning any animal into a ghoulish parasite. Growing to 4 inches in length, the Ground Finch approaches nesting petrels, gulls and Marine Iguanas as they rest and uses their massive bill, originally adapted to seed cracking to slit blood vessels and remove surface tissue. The tiny bird then laps up the blood and proceeds to its next victim before the host has a chance to shake it off. Nasty wounds left by the bird’s beak are prone to infection in the hot tropical sun. 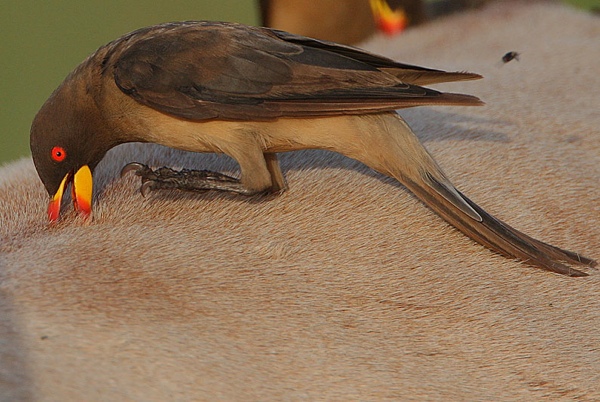 The Oxpecker is an 8 inch long tropical bird native to the grasslands of Africa. If you look at a picture of a Giraffe, Elephant or Rhino, one will often see a set of Oxpeckers clustered around the animal’s sensitive facial areas. Scientists long assumed this was a case of mutualism, with the birds removing parasitic lice and ticks, but it has now become apparent that this aberrant starling is something much more sinister. Nietzsche’s admonition “to take care when fighting monsters less we become monsters ourselves” comes to mind as we consider that this long admired ridder of parasites has become a terrifying parasite itself. Oxpeckers not only remove insects, but proceed to use their bills to expand the wounds inflicted by them as they remove and consume the host’s skin tissues, blood and plasma. 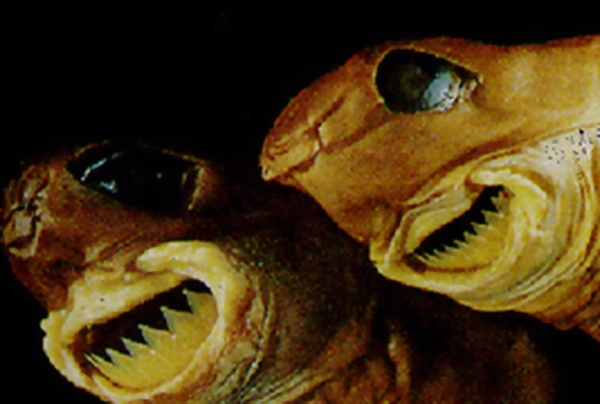 When we imagine a shark attack, we imagine a surface dwelling mega-predator removing limbs or shearing off flesh. However, a much more bizarre and disturbing truth exists. Scientists were long puzzled by strange circular holes in a variety of sharks, whales and fish, until a 15 inch long shark with a spherical mouth containing disproportionately large teeth was discovered. The Cigar Shark is a species of dogfish that dwells in the black depths of the sea, and rises up to a mile in the evenings to parasitize large prey, holding on and removing chunks of flesh before departing. Human encounters are rare because of the shark’s oceanic nature, but when they occur, very unpleasant flesh wounds result from the bizarre parasite as it hooks into the flesh. 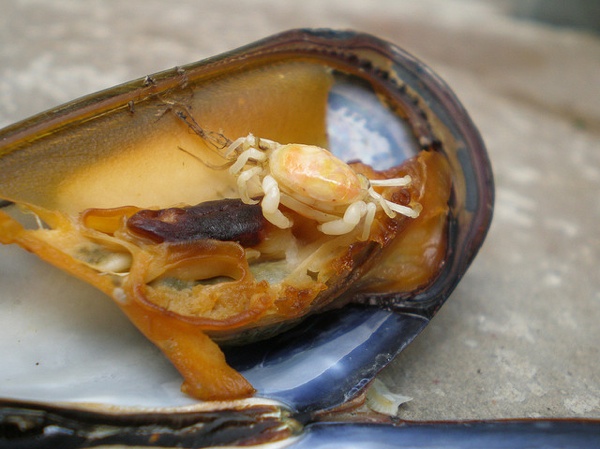 We now look at a case where the crab is not the host, but the parasite. We always imagine crabs to be independent, highly mobile predators and scavengers, but the Pea Crab has a far more grotesque life history. Approaching 1 inch (2 centimeters) in size, Pea Crabs invade their filter feeding Oyster host in juvenile form as plankton. Once ingested, they escape digestion and instead grow into a full sized crab inside the shell, where the push aside internal organs and move about while siphoning off oxygen and food from the host. The host suffers minor harm from the crab, which pays for its ghastly lifestyle with life imprisonment in the shell. 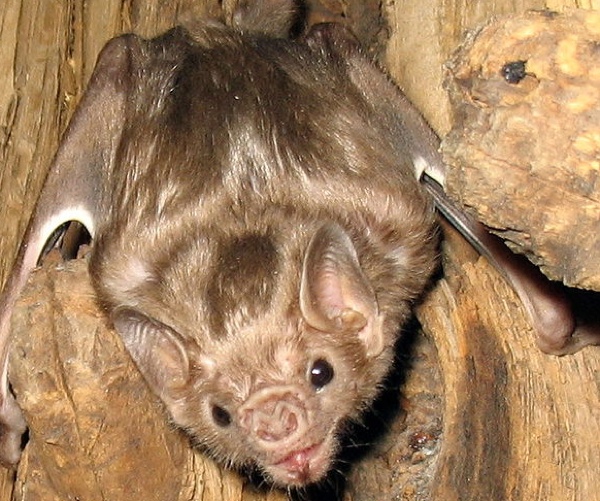 We are familiar with stories of Vampire Bats which drop down to suck blood from goats, and even humans, spreading the dreaded rabies infection. There is another more obscure species of blood sucking bat however, with a truly creepy lifestyle. However, the White-winged Vampire is a specially adapted parasitic bat that only targets birds as its hosts. Lying in wait in the treetops, the White-winged Vampire swoops down on parrots, toucans and even eagles, sucking the protein rich avian blood before moving on to a new host. Birds lack arms, and are therefore helpless to detach the monstrous blood sucking bat as it sucks quantities of blood from them. 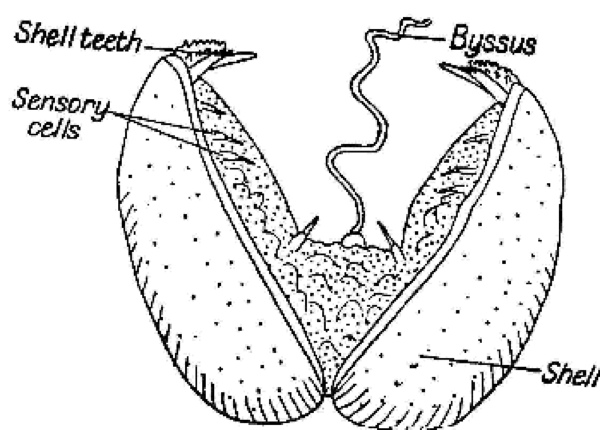 A shellfish might seem the most innocent and harmless, but the truth is far more insidious. In the breeding season, giant freshwater clams known as Pearlshells, which grow up to 7 inches across release thousands of tiny young. These tiny larvae are known as Glochidae, and are highly aggressive parasites of salmon and trout. Weighing only fractions of a nanogram, the tiny shellfish would be washed downstream on their own. Armed with razor sharp hooks, Glochidae sink into the flesh of passing spawners lured by the parent clam’s foot ornamentation as they head upstream. Once the young clams approach the headwaters, they have gained in size, and drop off the fish and sink to the riverbed, where they will grow to full size over a period of 50 to 100 years. Damage to the fish can include lesions, but the filter feeding adult clams repay the ecosystem in the longterm by improving water quality. 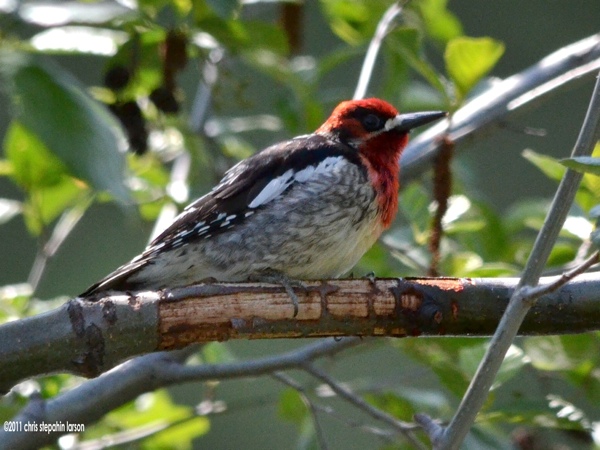 The Red-breasted Sapsucker is a bird that is both loved and hated, for it is the most beautiful parasite on Earth, and one of the most potentially damaging. This unique parasite inhabits North American woodlands. Unlike other woodpeckers, the Sapsucker drills hundreds of tiny holes in its host tree, feasting on the constant flow of sap. Within several years, the tree dies, but not without supporting an entire family of parasitic birds, which dig a nest in the host tree. The sap holes are of great importance to hummingbirds and insects, which seek out the host trees, and the resulting dead snag adds greatly to wildlife habitat. Where sapsuckers invade orchards, disaster can strike as prize fruit trees are parasitized and then fatally peppered with hundreds of sap leaching holes.

WARNING: the video clip above may be considered disturbing by some. Yes, it’s true. As a human being, you count on this list. Humans are technically the largest parasite species on Earth, owing to the unique cultural adaptations of the Masai tribe of central Africa. Rather than becoming pure predators like most of humanity, Masai cattle herders make an incision into the cartoid artery of range cattle, draining several quarts of blood at a time before the precision wound closes up. The blood is placed in hollow gourds and mixed with cow’s milk before being drunk by the hungry humans. Apart from the Vampire bat, this unique cultural practice makes the human species the only mammal that engages in parasitism of another species.