There is a world of weird hiding inside your Maltese—or any other dog for that matter. In recent years, scientists have uncovered the strange things that dogs use.

Besides having special muscles to manipulate people, they tap into the planet’s magnetic field to poop. Then there are the dogs that track killer whales, shoot hunters, and return from extinction as the most primitive canines on Earth.

10 The Dog That Shot A Hunter 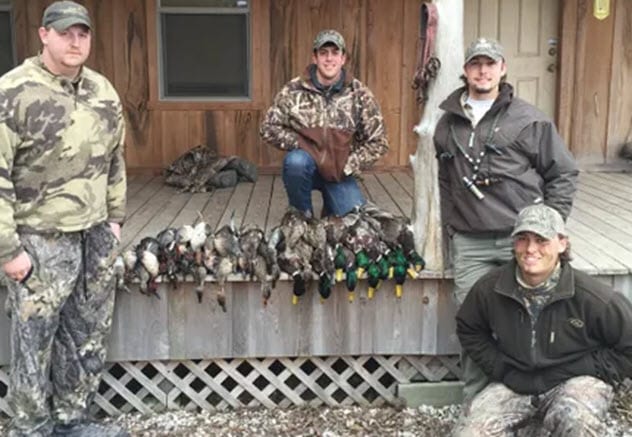 In 2019, ex-LSU player Matt Branch and his friends went duck hunting. They took along a Labrador named Tito. The former lineman for Louisiana State University left a loaded shotgun in the back of his pickup. The safety was on, rendering the firearm safe.

The group moved a few yards away to prepare for the start of their hunting trip near Eagle Lake in Mississippi. Tito the dog decided to jump onto the bed of the truck. In doing so, he managed to step on the 12-gauge shotgun’s safety and pull the trigger.[1]

The blast went through the side of the truck and hit the 29-year-old Branch in the left thigh. He underwent several surgeries, but the damage was too severe. Doctors eventually had to amputate his leg. 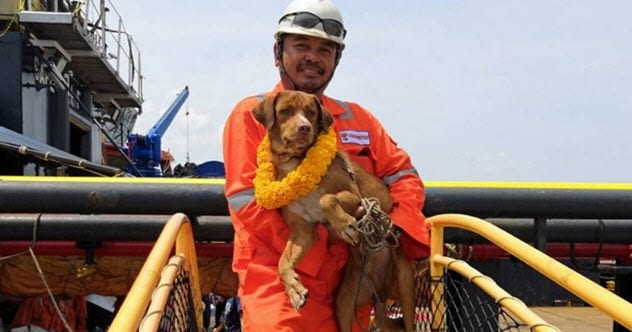 In 2019, oil rig workers were stunned to find a dog in the water. Their workspace, a Chevron oil rig, was 220 kilometers (135 mi) from the coast of Thailand. The lost creature managed to paddle toward the rig where it desperately clung to the bottom. The crew fashioned a loop and fished for 15 minutes before they got it around the animal’s neck and hauled him to safety.

Some spoiling was in order. The dog was dried, fed water and meat, and given a flower garland to wear. The crew also gave him a kennel and the name “Boonrod.” In Thailand, the term is used for survivors with good karma.

Once Boonrod returned to land, veterinarians declared that he was in good health and homed him with an animal rescue group. One of the oil rig workers, Vitisak Payalaw, said that he would adopt Boonrod if nobody offered him a permanent home. It remains unclear how the dog ended up miles from land, but he probably fell off a fishing vessel.[2] 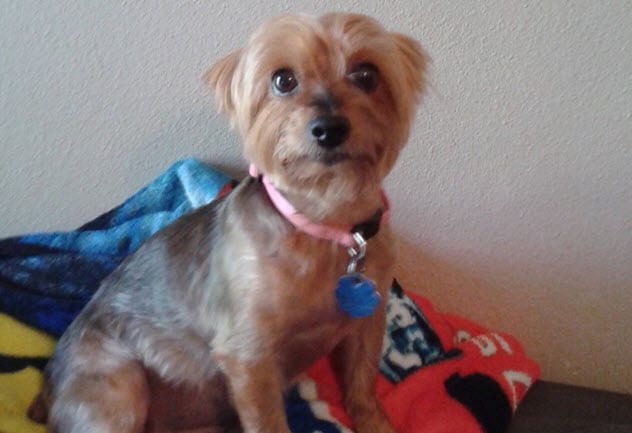 In 2016, Joanie Simpson from Texas went through a rough patch. The 62-year-old’s son faced surgery, her daughter’s husband had lost his job, and a property deal was turning hairy. Worst of all, her beloved Yorkshire terrier had congestive heart failure. Joanie doted on the Yorkie, but her pet’s health failed so much that a euthanasia date was arranged.

When the day arrived, Meha the dog seemed fine and Joanie canceled the appointment. The Yorkie died naturally the next day but in a terrible manner witnessed by her owner.

One morning, Joanie woke with all the symptoms of a heart attack. She was airlifted to a hospital in Houston where emergency personnel were preparing for her arrival. However, it turned out that Joanie never had a heart attack. Instead, she experienced a real medical condition called “broken heart syndrome.”

The sometimes-fatal condition mimics heart attacks and can be triggered by emotions like grieving. Since dog owners often mourn their pets intensely, it should come as no surprise that Joanie’s was not the first recorded case where somebody developed the dangerous condition after a dog’s death.[3]

7 Loving Dogs Could Be Genetic 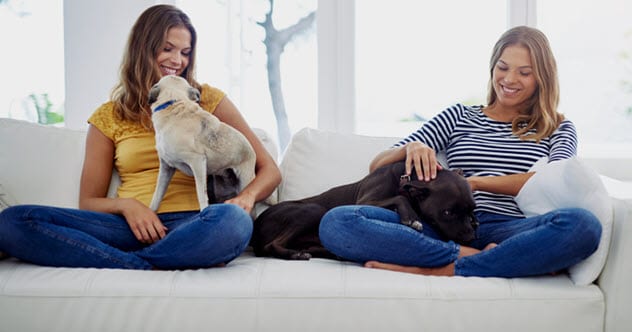 In 2019, researchers wondered if a fondness for dogs was genetic. Sweden was the perfect place to find out. The country holds the largest twin registry and requires all dogs to be registered with the Swedish Board of Agriculture. Twin studies allow scientists to compare genetic, behavioral, and environmental data among people who share 50–100 percent of their DNA.

The 2019 study was thorough, combing through the data of 85,542 adult twins. Next, the team riffled through 15 years’ worth of dog ownership records. Only 8,503 people owned a canine pet. Remarkably, computer models found that genetics and environmental factors could equally predict those more likely to adopt a pooch.[4]

While the exact genes remain unidentified, the dog-loving DNA patterns were slightly higher in women. The study added an interesting layer to previous research into the health benefits of dog ownership. It suggested that health perks such as better fitness and mood could be partially explained by genetics. 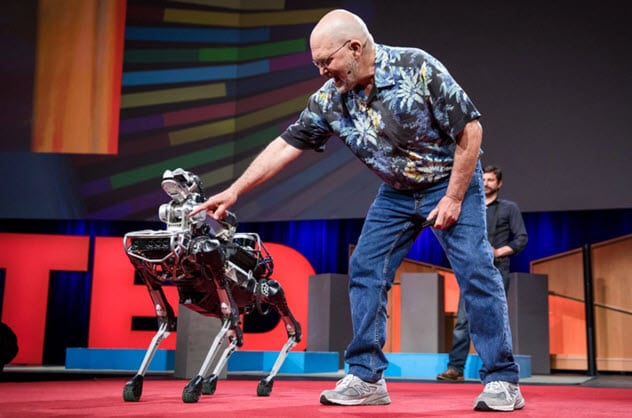 Boston Dynamics is a Google-owned firm that specializes in technology. One of their fields is robotics. In recent years, the company revealed plans to use robot dogs to deliver packages to clients. Unimaginatively called “Spot,” one machine indeed resembled a dog. It walked on four legs, traveled upstairs, and was nimble enough to resist a shove.

The company was unclear about combating the theft or abuse of the metallic mutt once it meandered off to deliver somebody’s mail. Spot had a smaller sibling named “SpotMini” which looked like a dog-giraffe hybrid. This smart creature mapped the world around it, which allowed SpotMini to skirt around obstacles.

Boston Dynamics also tested the two canines as workers at factory production lines. In retrospect, this might be a safer option for the robots.[5] 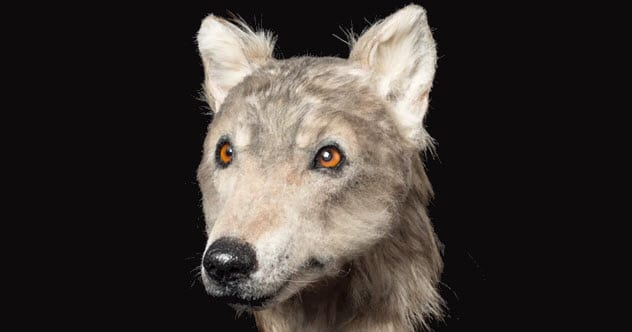 In 1901, researchers investigated a Neolithic tomb. The burial was located in Scotland’s Orkney Islands at Cuween Hill. Around 24 dog skulls were discovered inside. A later study found that the animals were interred around 4,500 years ago when the tomb was already 500 years old.

As unusual as that seemed, the real surprise came in 2019 when one skull was reconstructed. Scientists wanted to know what Scotland’s dogs looked like during the Neolithic period. After a 3-D scan measured the skull’s particulars, the details were used to craft a “real” head using forensic techniques.[6]

The result was a wolflike creature. As the dog was domesticated, its resemblance to the European gray wolf was unexpected. The animal, which was about the size of a collie, also lacked the high forehead of modern dogs. Besides providing a curious glimpse at ancient Scottish dogs, the skull also showed their importance in ritual burials. 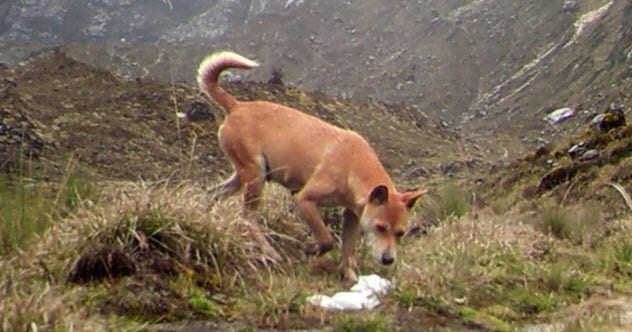 For decades, nobody saw the New Guinea highland wild dog. General opinion declared the canines extinct. Nevertheless, two unhelpful photographs taken in 2005 and 2012, respectively, suggested that the dogs might still be alive.

Then, in 2016, a doglike footprint surfaced in the New Guinea highlands. Trail cameras were rigged all over the place, and within two days, the devices took 140 images of at least 15 different wild dogs.

Even better, the researchers encountered the animals face-to-face. Males, females, and playful pups proved that there was a viable population. Most had golden coats, upright ears, and tails curling toward their backs.

The DNA samples returned interesting snippets. The wild dogs are officially the world’s most primitive and ancient canids in existence, having lived on the island for around 6,000 years. They are also related to the Australian dingo and the New Guinea singing dog. Only 300 singing dogs still exist, and they are the captive-bred version of the highland wild dog.[7] 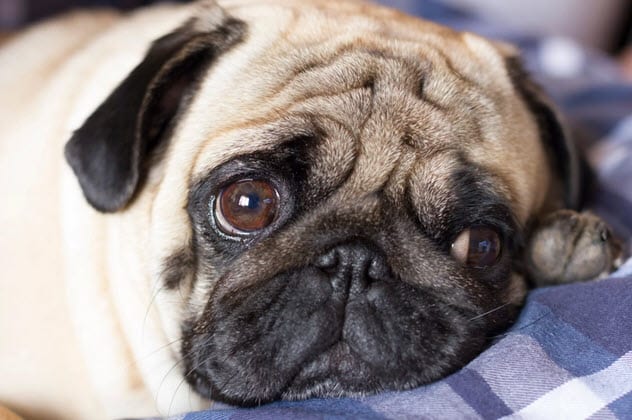 Fido destroys the couch. While sitting between swathes of sponge and being berated, the dog gazes up at the owner with a certain look. The raised eyebrows make the chair killer look confused, regretful, and vulnerable. It creeps underneath our best defenses.

In 2019, researchers discovered that dogs evolved to manipulate humans with their eyebrows. They mimic human emotions to trigger a nurturing response. This was not an evil plot against humanity but more likely natural selection driven by owners.

For thousands of years, people would have better cared for the dogs to which they felt connected. As a result, dogs developed special muscles around the eyes. Completely absent or underdeveloped in wolves, the muscles allow dogs to lift their eyebrows intensely to pluck at human heartstrings.[8]

The Siberian husky is excluded from this behavior. As a close relative of the wolf, the husky’s “puppy gaze” eye muscles are also underdeveloped. 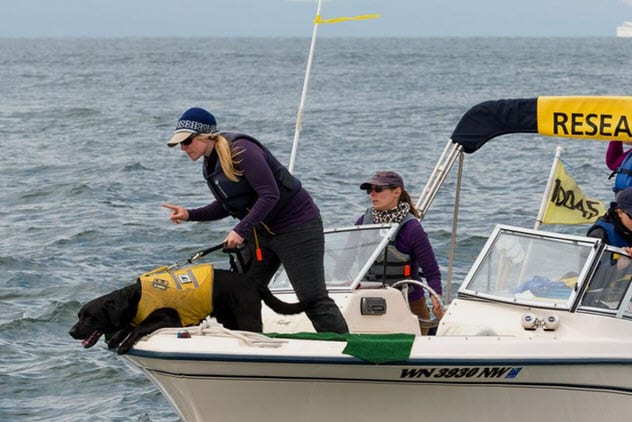 In 1997, the Conservation Canine program was founded. Also known as CK9, it trains dogs to find the poop of wildlife. Most of the dogs are rescues with a strong ball drive. This ball obsession is the key requirement for picking new CK9 candidates. The toy serves as both a training tool and a reward.

The program offers a noninvasive way to gather information about threatened and endangered animals. Scats are unusually crammed with personal details. A single deposit can reveal the animal’s gender, stage of pregnancy, diet, and health. It can even allow scientists to recognize individuals.

Some dogs track caribou, cougars, and owls. Rarer species like the giant armadillo, tiger, and Iberian wolf also have ball-addicted pooches after them. The most remarkable tracking feat involves orcas off the shores of Canada. While standing on the deck of a research boat, CK9 dogs have located the floating (but quick to sink) scats of orcas on multiple occasions.[9] 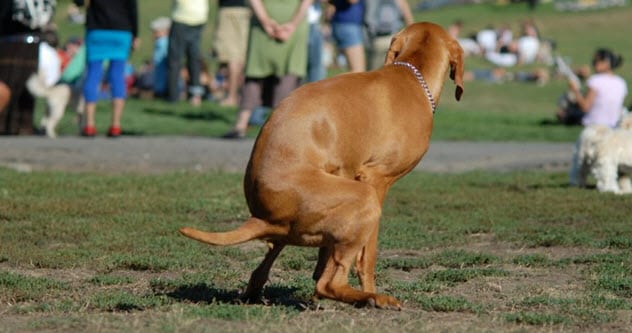 It is a well-established fact that birds migrate by using the planet’s magnetic field. In a study that concluded in 2014, researchers announced that dogs also tap into this field. However, what they use it for is weird.

The study ran for two years, observed 70 dogs from 37 breeds, and recorded their bathroom habits. In an attempt to find a link between canine relief and the Earth’s magnetic field, the team watched 1,893 defecations and 5,582 urinations.[10]

Bizarrely, the dogs preferred their business to be done along a north-south axis. This was most obvious when the Earth’s magnetic “weather” was calm. The strangest find was that the dogs actively avoided squatting along the east-west axis. Despite suffering through thousands of bathroom moments, the researchers cannot explain why dogs do this.

Read more fascinating facts about dogs on 10 Weird Facts About Dogs and 10 Lies About Dogs We All Believe.