Birds are among the more conspicuous species on Earth, allowing us the opportunity to closely observe their feeding habits, which at times rank among the strangest and most disturbing among animals. In this fascinating and at times unsettling account, we will look at truly aberrant bird feeding techniques and methods of hunting that may shock, and in some cases horrify us. As we leave bird seed in the dust, we explore avian aberrations including killer parakeets, the truly weird Black Skimmer, and Russia’s fish eating owls. 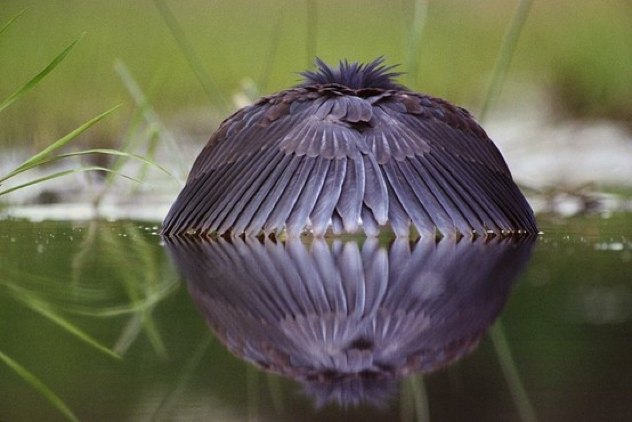 Herons are stealthy hunters that normally patrol the shallows of coastal marshes, inching forward to put surprisingly large fish within stabbing range. However, the Black Heron of the central African Wetlands has forgone the stalking in favor of a deadly invitation. In a scene that would rival an Aesop’s Fable, the Heron spreads its wings in a circle that creates a shaded silhouette, perhaps resembling a reed palm over the sun bathed waters. Tetras and other small fish seek out what they think is a cool, safe resting spot, but it will be their last. As the fish settle down, the heron’s bill plunges down from the “canopy” spearing the fish. The Black Heron will set itself up at several different locations throughout the day. 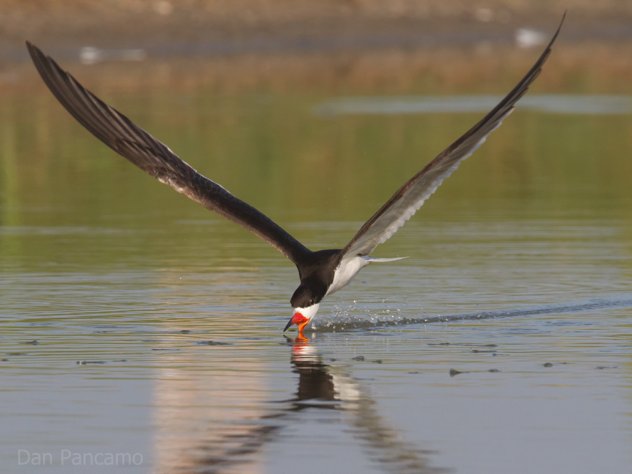 Related to Gulls and Terns, but resembling a sea going toucan, the incredible gull-like Skimmers are the only bird species with a lower bill longer than the top. Extending up to three inches past the top mandible, the bizarre jaw allows the skimmer to pursue an even stranger feeding technique. Flying at speeds of over 40 kilometers per hour, the skimmer drags its grooved lower mandible in the water, snapping it shut and swooping upward whenever a small fish is encountered. The Black Skimmers often hunt in pairs, and must maneuver constantly to avoid obstacles in the water. The bird’s eye view in this case would resemble the most extreme action film. Danger does exist. On occasion, a skimmer’s lowered bill may strike submerged driftwood, resulting in serious injury. 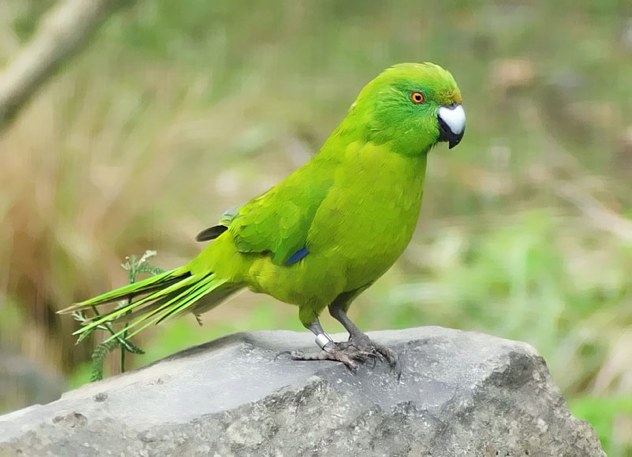 Of all the parrots that could truly be associated with piracy, the Antipodes Island Parakeet might be the most fitting. Endemic to New Zealand’s Antipodes Islands, the 12 inch relative of the pet Budgerigar looks like the quintessential green parrot, but this true brigand hides a dark secret behind its façade of normalcy. On the Archipelago, Grey Storm-Petrel nest in burrows excavated along the shoreline. Searching the coast, the parakeets dig apart the burrows of the robin sized relatives of shearwaters and albatrosses and proceeds to kill them with their sharply hooked parrot bill before devouring them. The Green Parakeet presents an incongruous image as a predator, but it is also a scavenger of meat, and will feed on any dead seabirds it finds along the shore. As a true parrot, the bird still eats fruits and seeds. 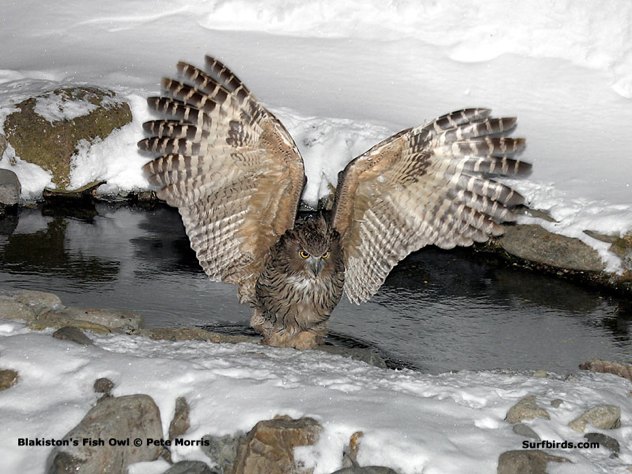 When we think of an owl, we immediately imagine a secretive, nocturnal forest dwelling predator that emerges from the darkness to hunt rabbits, skunks and mice. However the Blakiston’s Fish Owl swoops down under the cover of darkness to hunt in the water, targeting fish prey in wetlands and forested rivers. With a six foot wingspan, and a weight of over 10 pounds, it is the world’s largest owl, specially equipped to hunt fish through spikes protruding from its foot pads. The spines quickly sink into the fish as the well-insulated owl swoops down and lifts its prey out of the water. Unfortunately, needless removal of trees along river banks both degrades the fish habitat and removes vital roosting sites, threatening these rare predators.

The true King of birds, Golden Eagles are featured on many national emblems, and occupy an ecological role in the avian world equivalent to that of a lion. With a wingspan of up to 9 feet, the 15-20 pound Eagle ranges across the entire northern hemisphere region, inhabiting the mountains and foothills, where it may take a territory of up to 60 square kilometers. Where most raptors take prey smaller than themselves such as rabbits and ducks, Golden Eagles combine their incredible strength, size and agility to bring down large mammal prey. Diving down a mountainside, the raptor extends its massive talons to seize a mountain sheep or ibex, carrying it a short while before hurling it off a cliff to kill it. When cliffs are not available, the hunters may descend into a forest and simply squeeze a deer to death. Threats to livestock are minimal, however.

Some birds have bizarre foraging strategies that do not result from a specific adaptation, but rather their incredible intelligence and ability to adapt to human presence in the world. Among these fortunate species, the Japanese Hooded Crow experienced great difficulty in feeding on ornamental tree nuts, which have a hard shell, but lack sufficient weight to break through air dropping. The clever corvids came to the ingenious solution of waiting for a red light, and then walking into the crosswalk to place the nuts in the path of car tires. When the cars roll forward the nuts are crushed, allowing the crows to retrieve their meal when the light turns red again. The amount of forethought and consideration is incredible, and continues to suggest that crows not parrots may in fact be the smartest of all birds.

In Mexico and Central America, prehistoric looking limestone caverns appear to pour forth clouds of black smoke every evening. Massive flocks of Mexican Free-tailed Bats emerge to hunt forest midges, but nature abhors a vacuum, allowing the hunters to become the hunted. The Bat Falcon is a tiny but ferocious raptor that has given up the typical falcon mainstay of small birds and instead, focuses on winged mammals. With specially adapted night vision, the falcon tears through flocks of bats, snatching one by the wing on each feeding pass and carrying it to its perch, where it is carefully dismembered. When bats are in short supply, the falcon may also capture insects and finches. Interestingly, another bird has developed a dependence on bats for food. As birds, the falcons are also immune to the risk of rabies. 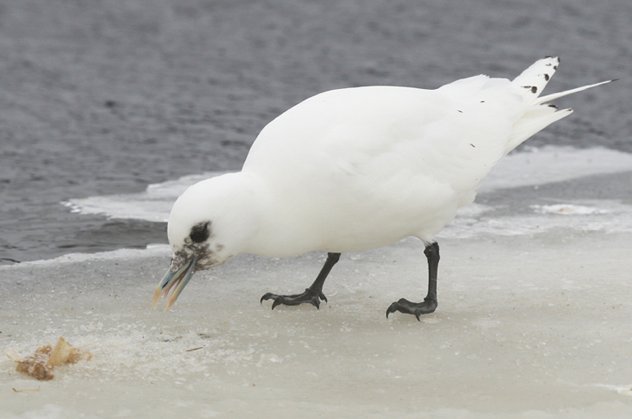 Gulls are known as scavengers of dead crabs, beached fish and detached mussels that wash up on the shore, but one species takes scavenging to its logical extreme. Inhabiting the far northern regions of the Canadian and Russian Arctic, the Ivory Gull patrols the frozen ice sheets in the land of the midnight sun; and during the winter, the midday moon. Lacking any reliable source of normal food, this avian equivalent of the dung beetle feeds upon Seal and fox excrement, and even the afterbirth of mammals. This bizarre diet provides much needed protein to the paradoxically beautiful little seabird, which has become endangered by introduced predators. The gull’s powerful gastric juices mitigate the risk of bacteria and parasite contamination that would harm most birds. 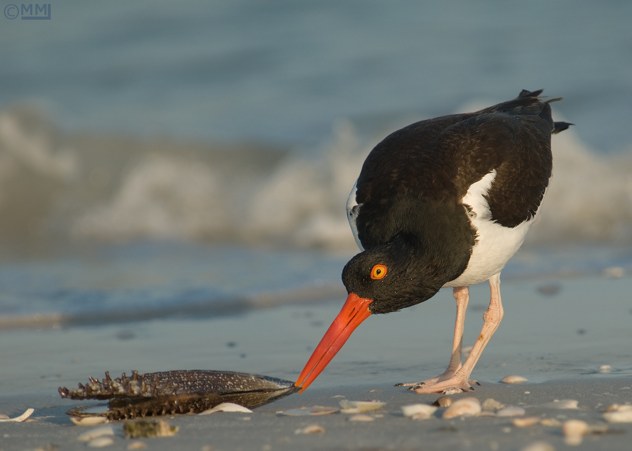 Most members of the sandpiper sub-order use their sharp bills to poke in the sand for shrimps, snails and mudworms. The Haemetopedia, or Oystercatchers are an oddly adapted shorebird that takes an entirely different approach to foraging. Possessing a razor sharp, solid red bill, the Black Oystercatcher, the most aggressive species, prowls rocky shorelines for mussels, clams and oysters, and proceeds to insert its bill sideways through the shells, cutting through the shell holding muscle. Interestingly, certain populations of Oystercatchers seem unaware of how to sever the muscles. Instead, these even stranger birds use brute force to smash through their shells. Oystercatchers then use their straw-like bill to suck out the insides. 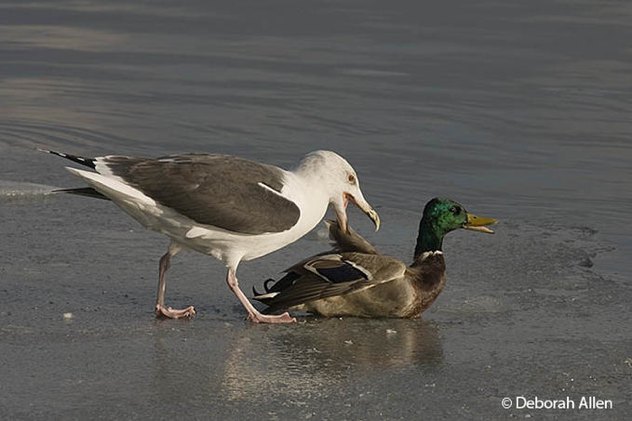 Unlike most of the 45 gull species, the Great Black Backed Gull has adaptations of size, ferocity and maneuvering skills that make it more akin to a raptor than a gull. With a wingspan of six feet, Larus marinus, translating literally to “Sea gull”, is the world’s largest gull species, and by far the most ferocious. Lacking talons, the Great Blacked Backed Gull screams through jet fighter like spiral dives in pursuit of such unlikely prey as puffins, ducks,  or even other gulls, which are seized by the massive bill, and then swallowed nearly whole. If the prey evades the first pass, the enormous, dark seabird may pull an aircraft like, 4 G inside loop and return. No other bird has the maneuvering powers of this unlikely predator, and few predatory birds are quite so aggressive.

Alexandre Thompson is an extreme wildlife researcher, ornithologist and writer with a passion for the mysterious and bizarre elements of nature. Radical nature tours in British Columbia, Canada are available.