Evolution has been going long enough now to give us a range of life so varied that we can’t even begin to comprehend what nature is capable of. Every so often we are reminded of these when we see something so perfect, it simultaneously baffles us and helps us to understand how nature works. Below are ten of the most in-your-face perfect examples of natural selection giving us some absolute triumphs of nature. 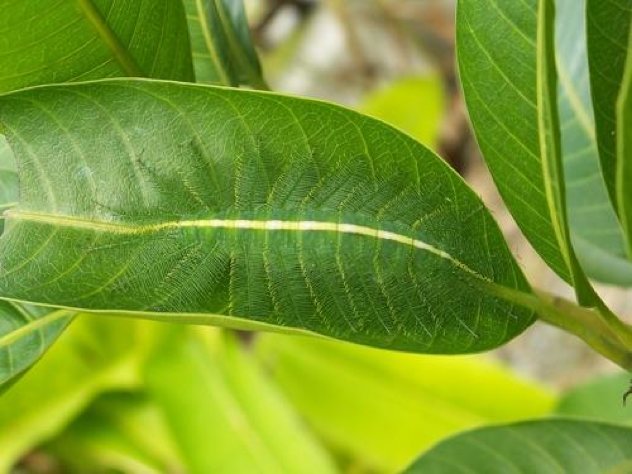 The Baron Caterpillar (Euthalia aconthea gurda) is native to India and Southeast Asia. They are about 4mm long with small spikes when they hatch, but as they reach their 4th and 5th stage of growth (known as instars), they can grow to be about 45mm, with much more elongated spikes. These spikes, along with the caterpillar’s colour, allow it to blend in with leaves to avoid predators until it’s ready to mature. 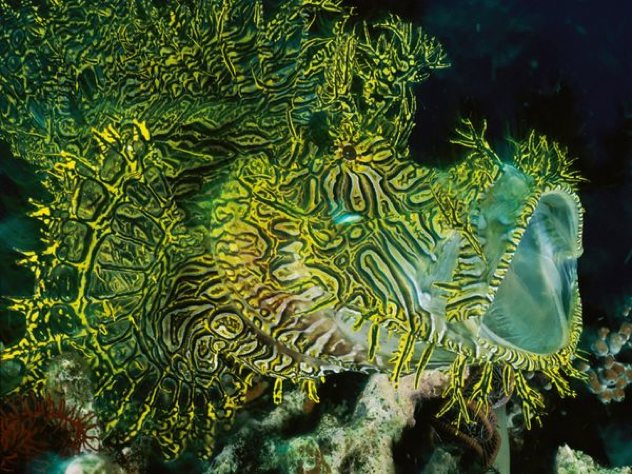 Merlet’s Scorpionfish (Rhinopias Aphanes) have a variety of other names, many of which include the word “lacy”. This is because they have a considerable amount of tentacles and skin flaps, as well as an unusual shape overall, which gives them their so-called lacy look. They use all of these factors to look like plant life, blending in with coral reefs. They will stay still for hours until they get an opportunity to jump out, and inhale their prey with their enormous mouths. 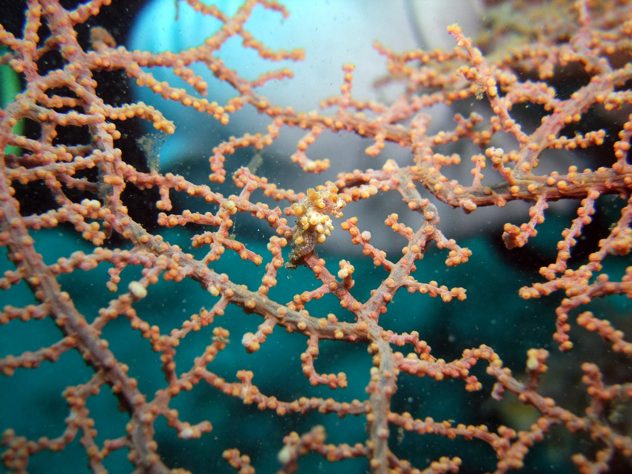 At a whopping 27mm, the Pygmy Seahorse is the Goliath of the recently mentioned Hippocampus Denise. Its minuscule size and elaborate camouflage help explain why the first was only discovered in 1969, and that only 6 more have been found since, all after 2000. They can be found 10-40 meters (33-130 feet) deep, mainly off the coasts of Australia, Indonesia, Japan, New Caledonia, Indonesia & Papua New Guinea. 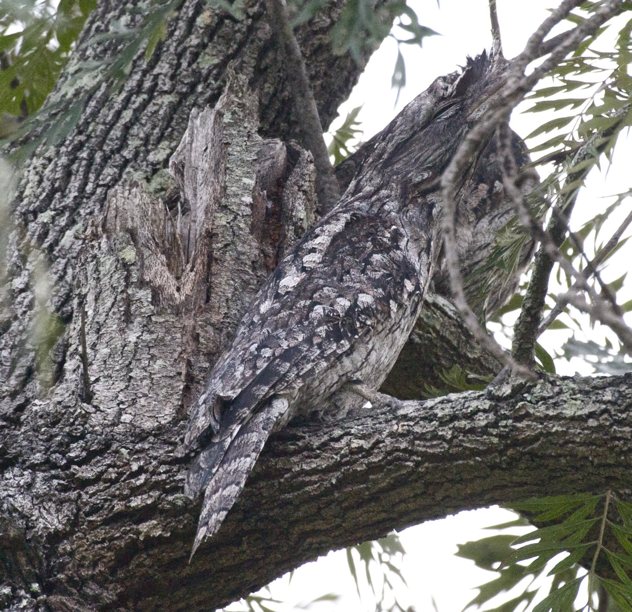 The Tawny Frogmouth (Podargus Strigoides) is a type of owl (in case you’ve been trying to spot a frog for a few minutes) native to Australia. Although they are, unsurprisingly, nocturnal, they have developed a sophisticated method of daytime camouflage: they sit still, close their eyes, stretch their neck and compact their feathers, making them look like a broken tree branch. This is used as a defense mechanism, not for hunting, like some of the other entries. Ironically, the biggest threat to the Tawny Frogmouth is their method of hunting. They mainly eat insects, and since they are nocturnal, insects are most visible in lit up areas. Unfortunately, the most lit up area is often directly in front of a moving car, where many of these birds will probably wish they were easier for us to spot. 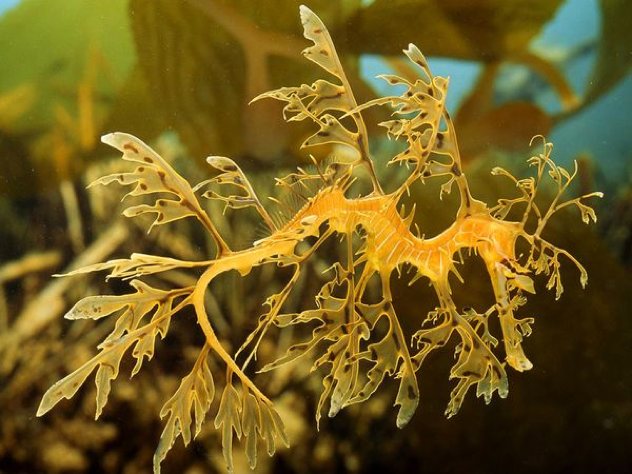 Leafy Sea Dragons (Phycodurus eques) are native to the oceans south of Australia. Measuring up to 35cm (13.8 inches), they have long, slender bodies, decorated with elaborate leaf-like appendages to help them blend in with the plant life of the water. They are closely related to sea horses, and should not be confused with their much less spectacular cousins, the aptly named Weedy Sea Dragon. 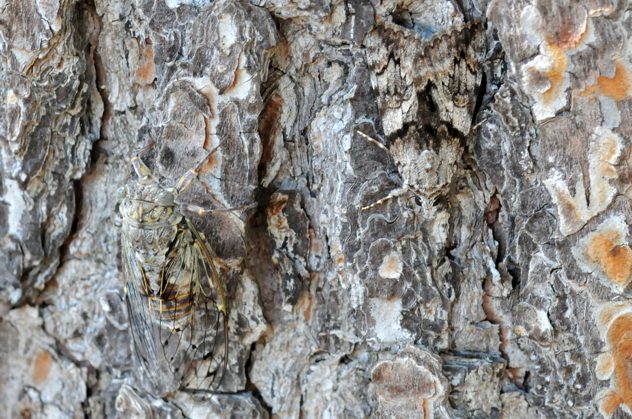 There are over 200 species of underwing moths, mostly found in eastern North America. They are so called because the second set of wings, those only visible when flying, are bright patterns of orange, yellow red and white, while their first set of wings are usually a mix of gray and brown patterns. Experiments have shown that the moths actually choose trees with bark similar to their own color to better protect themselves. To the left you can also see a Grey Cicada, whose camouflage is a result not only of its coloring, but also its see-through wings. 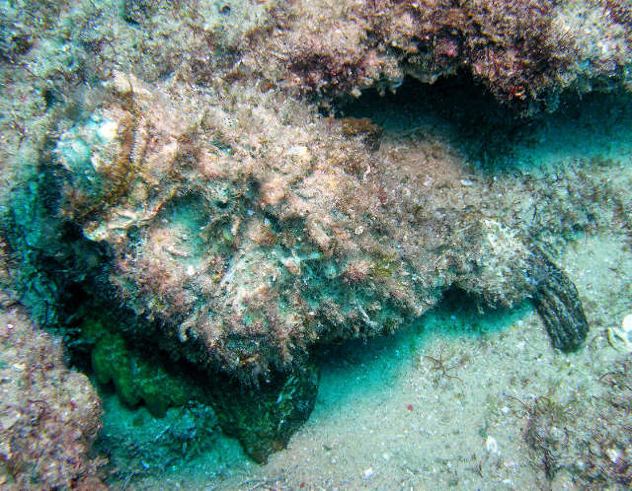 The Reef Stonefish (Synanceia Verrucosa) are found in the rocky coral of Australian coasts, and can measure up to 50cm (1.6 feet). Needless to say, being from Australia, the fish is one of the most venomous in the world. It can inject venom through any of its 13 spouts. Although nobody has died as a result of their venom since Europeans arrived in Australia, their sting is still extremely painful and dangerous. This makes their camouflage a lot more terrifying. And if you think you can stay safe by keeping out of the water, think again: these fish can survive up to 24 hours on land. 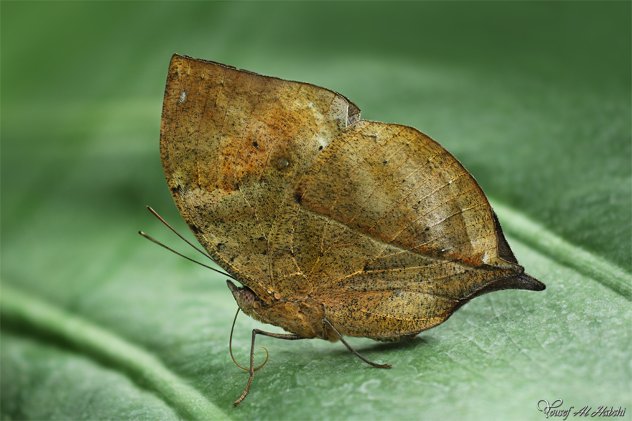 Probably one of the most perfect examples of camouflage in the animal kingdom, the Dead Leaf Butterfly (Kallima inachus) the dead leaf butterfly is found mainly in tropical Asia, especially India and Japan. As if the camouflage wasn’t elaborate enough as is, the dead leaf butterfly has 2 generations per year, its appearance depending on whether that generation is alive for dry season or wet season. Their wings can even have patterns to make it look like the leaf is at different stages of decomposition, including actually having holes. The walking leaf insect is another example of an insect that looks extremely like a leaf. 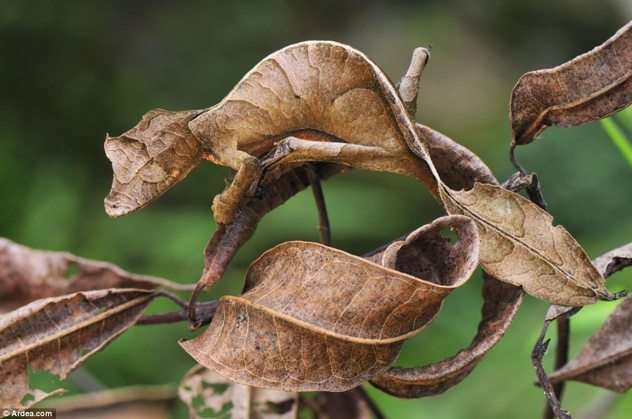 Native to the Island of Madagascar, and the smaller ones surrounding it, there are 8 Leaf Tailed Geckos known to us so far. Like the previous entry, they can look dried up, or rotten, but they are also famed for their ability to blend into bark on trees. There really is no one picture that can perfectly capture how varied yet perfect their camouflage can be. Or maybe there is and we just have no idea. But it’s worth taking a look at Google images to see how impressive they really are.

As impressive as the previous entries are, nothing we’ve seen so far can compare to the true champion of camouflage. The camouflage abilities of the mimic octopus is something we’ve seen before on listverse, but that’s not what I’m looking at. This is a video captured by marine biologist Roger Hanlon. The ability of this octopus to copy the colors, textures, patterns and shapes of its surrounding is like nothing else we’ve ever seen in nature. In the clip above skip to 1:30 to see it in action.

Although not their scientific name (yet), there’s no denying that these crabs are the most fashionable creatures in the animal kingdom. The crabs, actually known as dresser crabs, will take items found on the seabed, fray it so they have less defined edges (making it harder to spot), and cover themselves as much as they can. So next time you’re served crab cakes at a soirée, just remember that that crab could have, at some point, been wearing the same outfit as you.