We all know that animals love to put us humans to shame when it comes to amazing abilities. But that’s fine—we can be humble about it. I mean, if we really considered ourselves animals, our intelligence alone would put us quite high on this list—but not at the top. So, what could be better than supreme intellectual capabilities? Well, keep reading: I guarantee a few of these strange and amazing animal abilities will pique your interest. 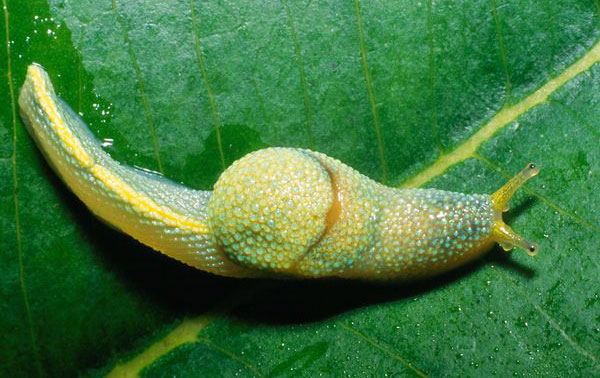 Ibycus rachelae to the fancy folks, this semi-slug (it has a shell, but it’s too small to retract into it) was discovered in a mountain forest in Sabah, Malaysia. One of the distinguishing characteristics that makes it so unique is that it sports a tail three times the length of its body, which it curls around itself when it’s inactive, kind of like a cat you wouldn’t quite want to pet.

Another curious ability: the Ninja slug can shoot calcium carbonate “love-darts” into potential mates. These darts are tipped with hormones that are specially designed to get their targets in the mood for love, with the hope that they’ll forget they were just shot with a spike, increasing the chances for successful reproduction. 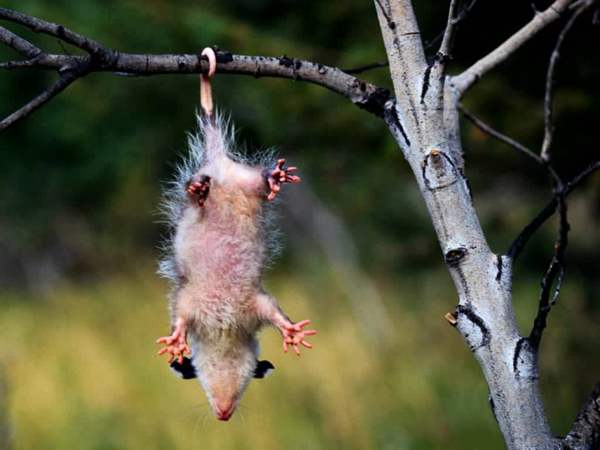 The most well-known defensive trait of the common North American opossum is its overwhelming instinct to simply fake death when confronted with danger. This is called Thanatosis, and while somewhat effective against predators other than cars, it just sometimes isn’t enough. That is why opossums were also created with a protein called LTNF (Lethal Toxin-Neutralizing Factor) that all but makes them immune to the venom of snakes, bees, and scorpions. The way this works is just as it sounds: Once the venom is detected within the opossum’s body by the protein, it actively seeks it out and sets to work neutralizing it. Amazingly, the marsupial is granted immunity to local snakes and snakes on other continents with which it has never had contact.

Interesting note: The LTNF protein has been injected into rats and has apparently successfully granted rodents immunity to otherwise lethal venoms. 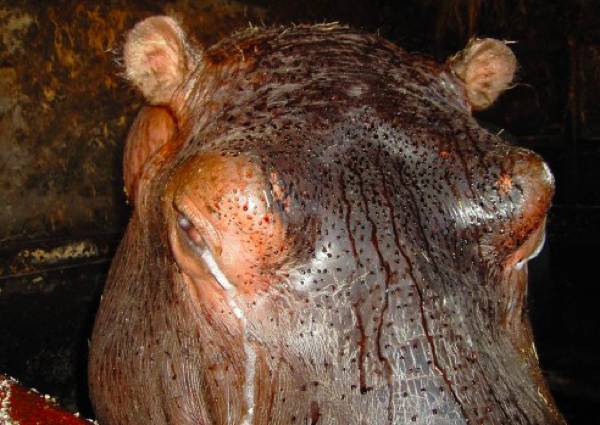 The hippopotamus is known as one of the deadliest creatures in Africa, but this shouldn’t be the defining characteristic of a creature so fascinating. Facts and interesting tidbits abound when it comes to these semi-aquatic titans. (Only one comes close to this list entry in creep-level: the poop helicopter it creates with its tail).

To deal with the sweltering African heat, hippos spend much of their time partially submerged in lakes and rivers. The water, however, does nothing to protect the exposed skin of the creatures, and that’s where hippopotamus sunscreen comes into effect: this blood-red, gelatinous secretion is produced much like sweat, though it differs in that the glands that produce it are located under the skin, rather than in it. Composed of two highly acidic compounds, the oily “blood-sweat” dries in the presence of mucus and absorbs sunlight in the ultraviolet and visible range.

As a bonus, it turns out that the substance is also a strong antibiotic, helping to prevent infections from open wounds inflicted on one another during fights.

It’s the harsh reality that comes with life on certain continents: at some point, you’re going to have to deal with some bizarre and even nightmarish animals. Spiders? Fine. Snakes? Yep. Crocodiles? Sure. Flying snakes? What? No!

Sure enough, in some forested regions of Southeast Asia, you might be (un)lucky enough to encounter a crazily writhing, mildly venomous serpent—at head level. These snakes can flatten out their bodies, suck in their stomachs, and make a daredevil leap from the treetops to travel more quickly and safely in the presence of predators. The really strange thing is, they can glide even more effectively than their limbed counterparts—up to 100 meters—despite lacking wings or even wing-like protrusions. 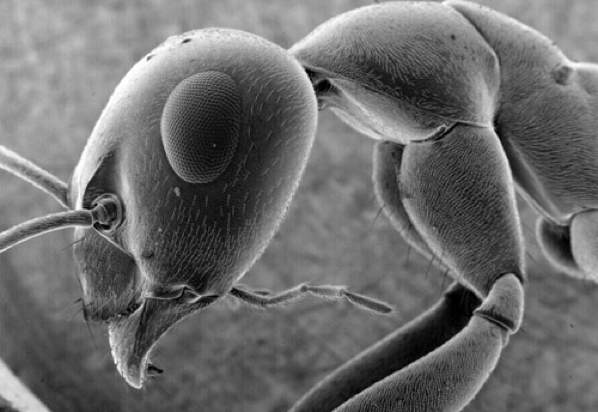 A species of ant found in Malaysia and Brunei whose workers sport a particularly explosive method of self—or rather, territorial—defense. The ants, having an enlarged mandibular gland containing a kind of “toxic glue” that runs the length of their body, can contract their abdomens and cause the glands to burst inside of them. This results in an unpleasant (for both the ant and victim, I’d imagine) gush of sticky secretions from the front of its head. You’d think that having something’s face explode at you would be bad enough, but the sticky nature of the liquid causes smaller predators’ limbs to become entangled, leaving them quite defenseless against a counterattack by the colony. Not to mention the cocktail of chemicals that is now covering their bodies. Even predators have bad days at the office.

If you’ve heard of the Pistol Shrimp, you’ll know about its claw. Snapping shut this single, massive claw produces a bubble capable of stunning or killing its prey. It doesn’t sound too impressive at face value, but there are a few things you should know about what this creature does for a living.

For starters, these shrimp are generally about 1-2 inches (3-5 cm) long, which doesn’t make them the most intimidating predator in the world. But even at that small size, they can produce a cavitation bubble capable of traveling at 60 mph (97 km/h) and generating a sound that reaches about 218 decibels. To put that in perspective, it takes about 160 decibels to rupture a human eardrum.

So, that all seems pretty impressive at this point—but there’s more to it. The bubble they create is an interesting sort of phenomenon: as the cavitation bubble collapses, the pressure and temperature of the vapor within it increases, which then causes the gas inside to violently dissipate into the surrounding liquid, producing an acoustic shockwave and even visible light called “sonoluminescence.” While the reaction doesn’t last long enough to melt everything around the shrimp, the heat of the vapors can reach up to 4,700 degrees Celsius. In comparison, the sun’s surface is estimated to be approximately 5,500 degrees Celsius.

(Interesting note: If the Pistol Shrimp loses its main claw, the smaller claw will grow to replace it, while the amputated limb regrows into a new “normal” claw.)

Sea cucumbers can hide from predators by liquefying and solidifying their bodies at will. With this bizarre adaptation, they can pour themselves into cracks and crevices, then secure themselves in their hiding places by regaining their solid form. Sea cucumber skin is made of a unique type of collagen called mutable collagenous tissue that can stretch, slide, and reorient without being damaged. When sea cucumbers enter their rigid form, the tissue orients itself into a lattice structure.

But this isn’t their only “superpower.” When threatened, some sea cucumbers discharge sticky threads to ensnare their enemies. Others can mutilate their own bodies as a defense mechanism. They violently contract their muscles and jettison some of their internal organs out of their anus. The missing body parts are quickly regenerated.

As an octopus, it’s tough to find recognition for your ability to camouflage yourself. All octopuses have the ability to change their color and texture to blend with their surroundings. But the Mimic Octopus takes underwater chameleon-ism a few leaps further: it can actually impersonate other creatures.

Depending on what might be attacking it, the mimic octopus intelligently decides which predator to impersonate. For example, a mimic octopus has been observed under attack by a damselfish. It proceeded to bury itself and six tentacles in the sand, leaving the other two pointed in opposite directions – and thereby mimicking the movement of a sea snake.

Mimic octopuses have also been seen to copy the appearances and behaviors of lionfish, flatfish, jellyfish, stingrays, mantis shrimp, and sea anemones; it’s claimed that they’ve been seen impersonating at least 15 different species. 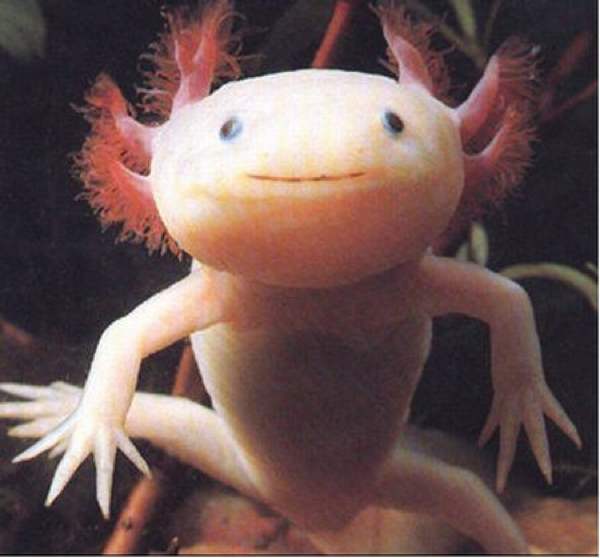 The axolotl is a strange creature for a few reasons. It’s a neotenous salamander, which means it retains its larval form even after reaching sexual maturity. Though confined to the water, it has a rudimentary set of lungs which it occasionally uses to gulp air at the surface. And it has the healing powers of a superhero.

When one of these creatures is damaged (cut, or having a limb torn off), coagulation begins immediately—and new cells start to develop. In the case of a missing limb, a layer of skin cells begins to form from the cells at the location of the trauma. Following this, new tissues begin to grow: the axolotl is remarkable for its ability to generate new blood vessels, sinews, muscle, bone, and even nerves. The length of time it takes to grow a brand new limb? Just a few months.

The same regeneration occurs with non-vital organs and even parts of the brain. It’s for these amazing healing abilities that the axolotl is commonly studied in laboratories around the world, which are hoping to someday pass on these traits to human beings. 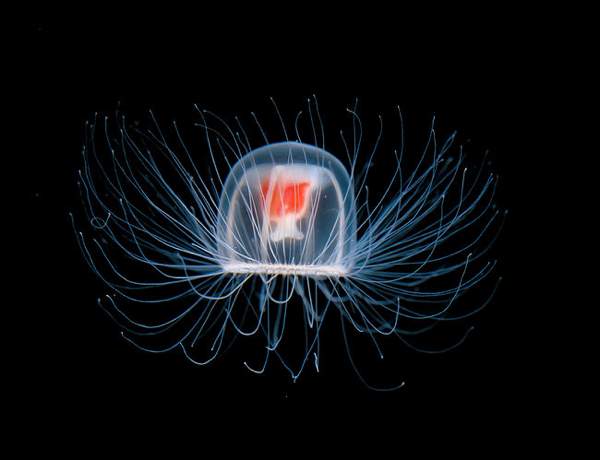 The Turritopsis nutricula is a species of jellyfish with a claim to immortality. It is renowned for its ability to continually revert into the immature polyp stage after reaching sexual maturity. It accomplishes this through a process called “transdifferentiation,” which is essentially the ability to transform one type of specialized cell into a completely new one. During this process, the medusa physically regresses into the beginnings of a polyp colony, absorbs its own tentacles and bell, then settles on the seafloor and once again starts growing to maturity—just think of it as turning back into a baby after becoming an adult.

Turritopsis nutricula can essentially do this forever—making it the only known creature that is biologically immortal. Of course, they still have to avoid predators in their polyp stage, which is physically impossible considering they cannot move. This makes it highly unlikely that any immortal jellyfish will actually live up to its name in the wild.