Premiering in 1969, Sesame Street has been one of the cornerstones of childhood for over forty years. Utilizing the Muppets of Jim Henson, songs, animation, and above all a deep empathy for children, the show has become a cultural phenomenon around the world, earning hundreds of millions in revenue and even spawning its own theme park.

According to author Malcolm Gladwell, “Sesame Street was built around a single, breakthrough insight: that if you can hold the attention of children, you can educate them”. Although a show expressly for the little ones (there are none of the ‘adult’ jokes floated in shows like “Spongebob Squarepants”), “Sesame Street” has continually been at the forefront of major societal issues that programs for mature audiences have ignored, including death, racial tolerance, and the differences between us. The show seeks not only to educate and entertain, but to help children understand the world around them. Below are ten fascinating facts which contribute to Sesame Street’s legend. 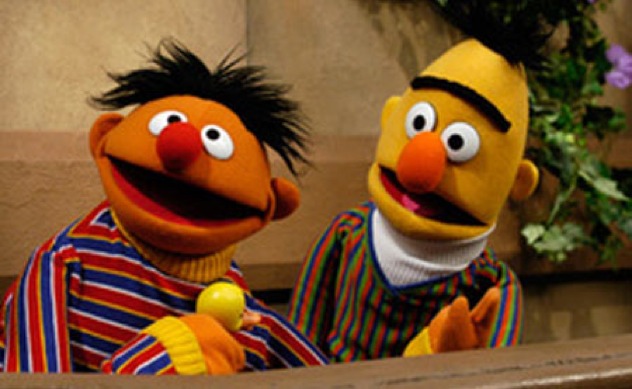 In recent years, as many around the world have begun pushing in earnest for gay marriage to become legal, a grassroots Internet campaign has surfaced urging longtime Sesame Street characters Bert and Ernie to finally acknowledge their homosexuality and tie the knot. Although the show has been renowned for preaching a message of tolerance, they carefully backpedaled away from these claims, stating: “Bert and Ernie are best friends. They were created to teach preschoolers that people can be good friends with those who are very different from themselves. Even though they are identified as male characters and possess many human traits and characteristics (as most Sesame Street Muppets™ do), they remain puppets, and do not have a sexual orientation.”

Although blasting loud music to psychologically torture people is not an entirely new concept, its use has really come to the forefront since the opening of the US’s Guantanamo Bay detention camp in Cuba. The purpose of the camp was to detain and interrogate subjects captured in the “War on Terror” begun since the events of 9/11. A great deal of controversy has arisen as pictures and stories have leaked to the public, and President Obama has made promises to close the camp that have yet to materialize. Amongst far more sinister and humiliating tactics, the soldiers at Guantanamo have been known to inundate Al-Qaeda operatives with blaring, repetitive songs including hard rock music and the Sesame Street theme that are known to break down mental resistance. Amnesty International has condemned this ploy, while the Pentagon has called it a mere “disincentive”. 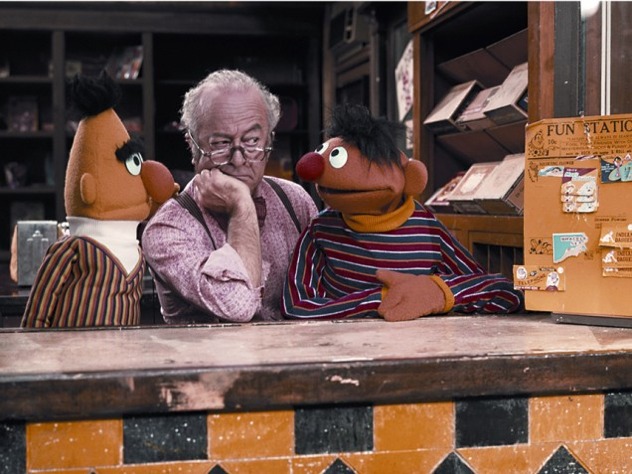 One of the original human characters on the show, Mr. Hooper ran a general store that served as a focal point and served such fare as birdseed milkshakes. When actor Will Lee died of a heart attack in 1982, there was some debate by the show’s producers how to handle the situation. Some leaned toward having the character retire, but eventually it was decided to deal with the issue. A child psychologist was consulted and the situation was handled gently, but head-on, with Big Bird unable to understand that his friend wasn’t coming back. When Big Bird expresses concern that it “won’t be the same” without Mr. Hooper, another of the adults tells him “You’re right, Big Bird. It’ll never be the same without him. But you know something? We can all be very happy that we had a chance to be with him and to know him and to love him a lot, when he was here.”

The episode aired on Thanksgiving Day, 1983, to ensure that the children who saw it would be around family that could help them with their feelings when they saw it. In retrospect, Mr. Hooper’s passing has been honored by many as one of the most important moments in television history.

The main focus of Sesame Street is a 3 apartment brownstone building (Bert and Ernie live in the basement). The show itself is filmed in Astoria, Queens, but the actual location of Sesame Street has been under debate for years. It is intended to be a neighborhood in Manhattan, though which exactly is up for debate, even amongst staffers of the show. Some suggest the Upper West Side, and others claim that it is modeled after the Alphabet City area of the Lower East Side. Some detail oriented investigators have tried to pin down the location based on clues from the show itself, including zip codes printed on envelopes and background shots of characters walking around. 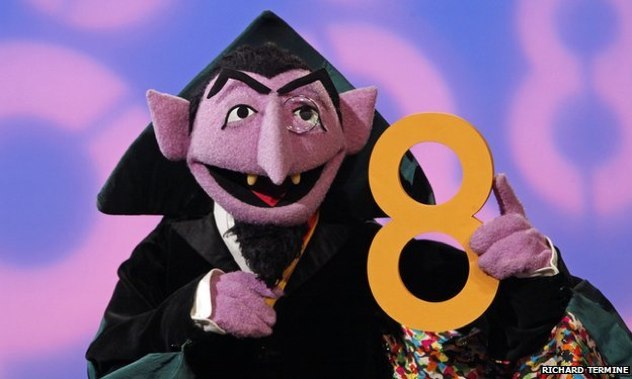 Despite the terror they invoke, vampires are really terribly vulnerable creatures, with a laundry list of weaknesses: sunlight, garlic, and religious symbols amongst others, depending on which franchise you are considering. But folklore speaks of one of the more rarely considered chinks in the vampire’s armor; arithmomania— an aspect of obsessive-compulsive disorder that in an uncontrollable urge to quantify and count things. Should one find himself confronting by a ravenous, undead ghoul, he could merely throw a handful of rice on the ground. The vampire would be helpless but to fall on his knees and count every single grain. This vulnerability has been rolled into the popular Sesame Street character “Count von Count”, the world’s least intimidating vampire, who teaches children basic concepts of arithmetic. 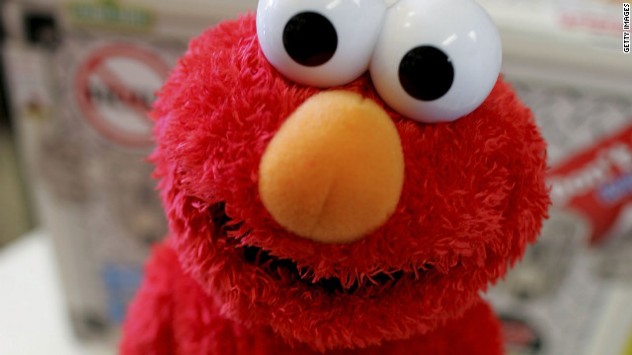 Elmo is one of the most popular (and obnoxious) denizens of Sesame Street, a bright red puppet known for his falsetto voice and habit of talking about himself in the third person. Elmo has been around for years, but he was relegated to the background for some time, until he was picked up in 1984 by young puppeteer Kevin Clash. Clash breathed life into Elmo, and over the next decade, his star rose exponentially. Elmo hit is stride in the mid to late 90s, with the release of the “Tickle Me Elmo” toy and the film “Elmo in Grouchland”. And then in 2012, 22 year old Sheldon Stephens emerged, claiming that he had Clash had an inappropriate sexual relations when Stephens was underage. Clash acknowledged the two had shared a relationship, but that it had been between two consenting adults. Stephens later recanted his statement, but other men came forward, claiming that Clash had also slept with them when they were teenagers. Clash quickly resigned. When he left the show, he made the statement: “Personal matters have diverted attention away from the important work ‘Sesame Street’ is doing and I cannot allow it to go on any longer. I am deeply sorry to be leaving and am looking forward to resolving these personal matters privately.” Since leaving, additional allegations have been levied against Clash. He has recently come back into the spotlight when he was nominated for four Emmy Awards, despite the scandal. 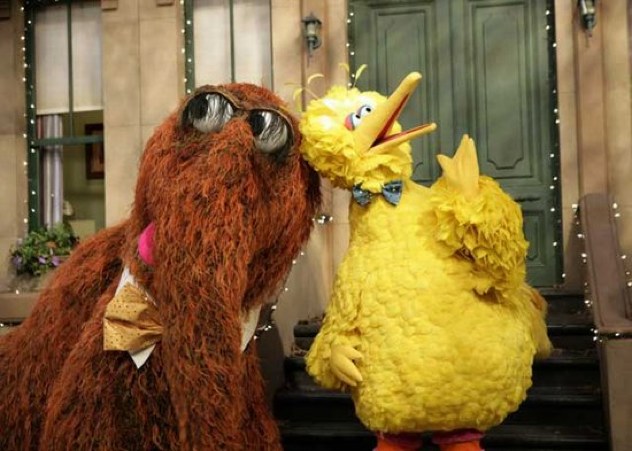 Aloysius Snuffleupagus is a woolly mammoth Muppet who spent fourteen years as Big Bird’s “imaginary” friend. Whenever adults would appear, Snuffy would vanish by way of coincidence, and the grownups would disbelieve Big Bird that he ever existed. Snuffy was revealed to the entire cast in 1985. According to Martin P. Robison, who plays the character, the producers decided that due to stories of abuse of children, they did not want to portray a situation between adults and a child character who wasn’t believed despite being honest. They were afraid they were giving kids the message that their parents might not listen to them in case they had a “unbelievable” story to tell, such as being sexually abused by a relative.

AIDS devastates sub-Saharan Africa like no place in the world; hundreds of thousands of children are born with the disease each year. Most of them die before the age of five. A staggering percentage of the children in the area have been orphaned by the virus. First appearing on 2002’s “Takalani Sesame” in South Africa, Five year old Kami is an upbeat yellow “monster” Muppet like Grover. She is portrayed with a perpetual case of the sniffles as a nod to her condition, which has also claimed the lives of her parents. Kami contracted HIV from a blood transfusion. Along with educating the children of South Africa and Nigeria about the disease, Kami helps them to deal with the societal stigma attached to HIV/AIDS and the inherent sense of loss and fear. Kami has since been appointed a representative of UNICEF projects throughout the world. 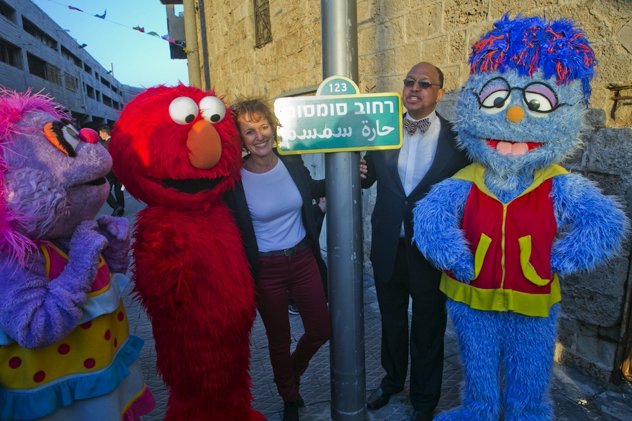 Africa is not the only place to host its own version of “Sesame Street.” There are varieties throughout the world, in Europe, Asia, Australia, and the Middle East. The earliest international adaptation was Brazil’s Vila Sésamo. Many other versions exist, each tailored to the specific language, environment, and social circumstances of the area in which it aired. While many of the characters carried over, others were added or replaced. In the Canadian version, the main character was a giant polar bear named Basil, who learned French from his bilingual friend. In the version from the Philippines, the Big Bird character is a giant pink turtle named Pong Pagong; in Israel it is a hedgehog named Kippi Kippod, and in Kuwait it is a camel named No’Man. According to Joan Ganz Cooney, one of the creators of the Sesame Workshop, she was stunned at the international interest in the show: “To be frank, I was really surprised, because we thought we were creating the quintessential American show. We thought the Muppets were quintessentially American, and it turns out they’re the most international characters ever created.”

In 1990, Jim Henson, the creator of Sesame Street’s Muppets, died suddenly of a bacterial pneumonia. In the wake of his passing, two memorial services (one in New York and one in London) were staged wherein both characters from Henson’s “The Muppet Show” and “Sesame Street performed”, including a heartrending version of “Being Green” by Big Bird. Henson’s only request was that no one wear black. Although the services were open to the public, they were not televised, and only certain recorded segments exist. Along with Muppet performances and eulogies from friends and collaborators, excerpts from Henson’s correspondence to his children were read, including this passage: “Please watch out for each other and love and forgive everybody. It’s a good life, enjoy it.”

Mike Devlin is an aspiring novelist. As Muppets go, he prefers Kermit.

10 Movie Sets That Came With A Curse Or Ghost