Saber-toothed tigers never fail to capture our imagination. They’re an (albeit extinct) example of just how terrifying teeth can get—but as we’ll find out, the dangers of extreme dentition aren’t merely confined to the past. In this list, we’ll take a look at the most dangerous, bizarre, and shocking teeth you could ever hope to avoid encountering: 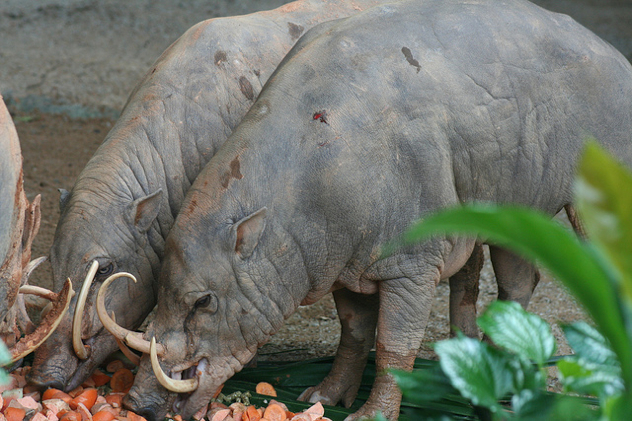 There are some animals so bizarre and disturbing that we begin to question how evolution managed to create such creatures. The four species of babirusa possess exceedingly bizarre weaponry, with which they carry out acts of aggression.

Native to Indonesia, these “Deer Pigs” not only possess massive lower canines that curl, fang-like, over the upper jaw—but their upper canines also come in backwards, pairing with the lower tusks and curling back towards the head. Males slash each other with their sabers during vicious mating disputes. The upward direction allows them to be effective in combat, but if the Babirusa fails to grind them down, they may grow into the animal’s skull—with fatal results. 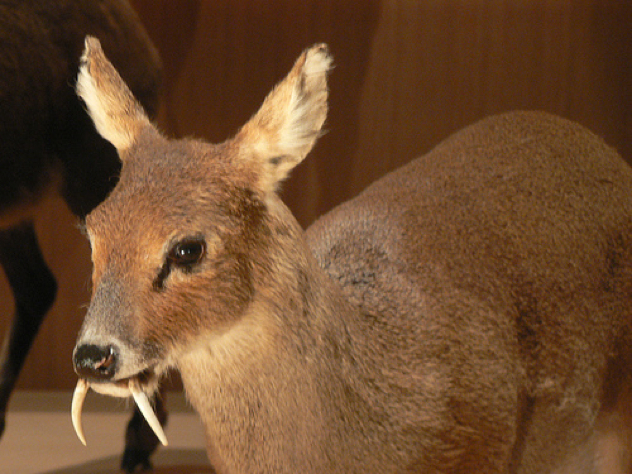 Yes—saber-toothed deer. The thought is so strange and terrifying that one might be tempted to dismiss it as fantasy. In fact, several species of ungulate known as “musk deer”, native to Eurasia, possess massive fangs, which develop from outgrowths of the canine tooth.

Musk deer fangs extend several inches past their lower jaw. Unlike the infamous cats of the distant past, musk deer go to battle against other males with their canine sabers, sinking them into each other during mating disputes. The creatures are genetically distinct from true deer (cervids), and are named after the powerful scent they produce to mark their territory. 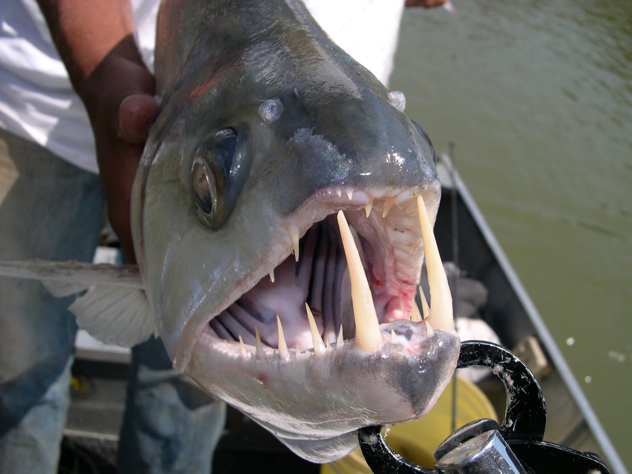 Back when the saber-toothed tiger was still roaming around on land, the terrifying payara was evolving exactly the same weaponry for domination of the rivers—but in reverse. Growing to lengths of more than four feet (1.2m), payara stalk the waters of the Amazon, sinking their three-to-four-inch fangs through the vital organs of their prey.

As the stricken prey sinks towards the bottom, the payara’s cavernous jaws engulf it. Unlike most saber-toothed animals, its fangs remain entirely inside its mouth, sliding into two holes in the upper jaw. The ghastly appearance and potential danger of a bite from the “vampire characin” sends chills through the spine of even the most seasoned fisherman. 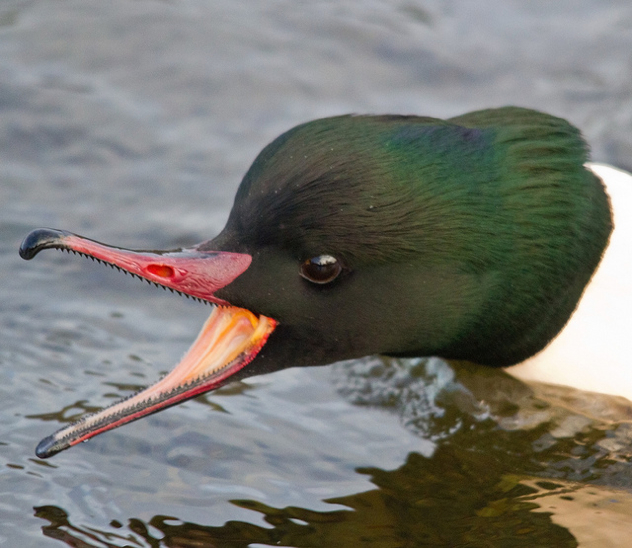 At first glance, the goosander looks like a typical waterfowl; but when feeding ducks at the pond, you might not want to offer your hand to the members of this unusual species. As the largest of the “Sawbills” of the genus Mergus, the goosander inhabits rivers, estuaries, and park lakes throughout Eurasia, Canada, and the USA.

Extending from its bill are more than one hundred and fifty razor-sharp teeth, curved backwards, which can slice through the bodies of fish like a hot knife in butter. A bird with teeth is always going to be an anomaly—but even more eerily, this dinosaurian “devil duck” may at times saw up small mammals, and even other birds, as though it were some form of aquatic raptor. 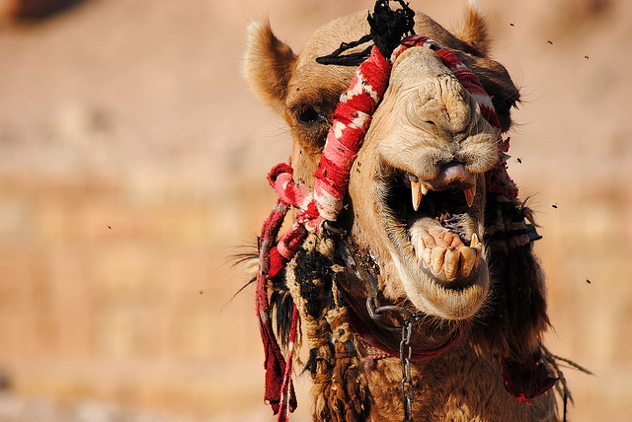 The fact that an animal is a herbivore should never tempt you into the belief that it poses no danger to you. Some plant eaters still have particularly wicked canine teeth.

Take the familiar and apparently blasé dromedary camel, for instance. Although this species has long been used as a pack animal and grazer, those thick lips hide impressive teeth that reach over three inches (7.5cm) in length. With such massive jaws and sharp teeth, it is easy to understand how owners have been killed—sometimes in their sleep—by camels with a mind for revenge. It is well within their power to crush a human skull. Fatal bites, such as the one recently reported in China, may also occur during mating season, when the animals are defensive and territorial. 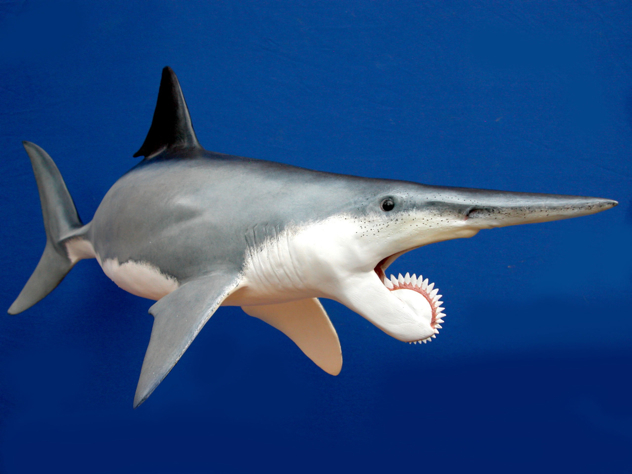 This is the only extinct species on this list. The helicopron was a shark, twenty feet (6m) in length, which used its enormous teeth in a manner unlike that of any known living creature. Attached to a circular muscle, the shark’s mouth apparatus would shoot out and shred prey into bite-sized pieces, much like an actual chainsaw.

The shark’s bizarre form of dentition was misunderstood by scientists for years, before the strange and disturbing truth was eventually revealed. The two-inch (5cm)-long teeth were tightly packed in a descending spiral, ensuring that the prey was torn to pieces with great speed. 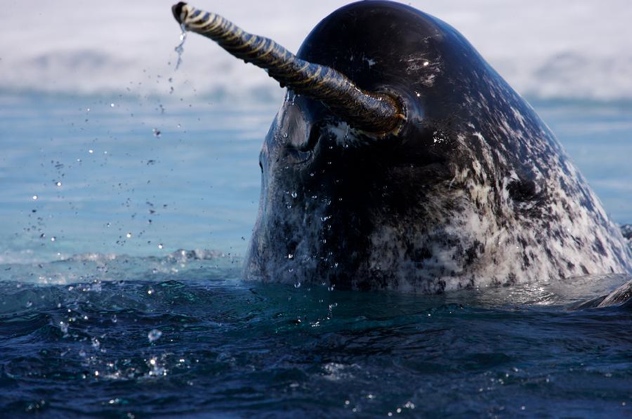 The “unicorn of the sea” was afforded mythical status by explorers and researchers—until the moment when the bizarre creature was properly documented and found to be real.

In a bizarre twist of physiology, this relatively small, thirteen-foot (4m)-long whale developed a lethal “spear” atop its head, which could be used during territorial disputes and in self-defense. Occasionally, it is used to break up ice in the whale’s arctic habitat.

In a departure from the norm of symmetry in the animal kingdom, the narwhal’s enormous weapon is actually a modified right canine tooth that angles forwards and extends through the animal’s forehead. The narwhal has no other teeth in its oddly-shaped jaws, but on occasion, the left canine socket may sprout a second “tusk,” sometimes of equal length to the first. 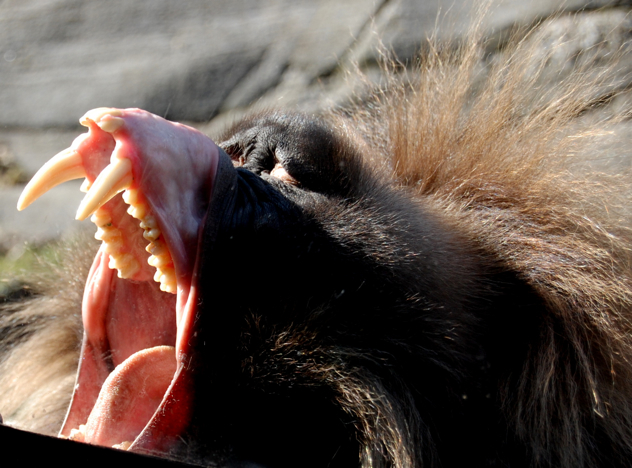 Baboons are the largest monkeys on Earth, filling out at more than eighty pounds (36kg). Despite being around half the size of most humans, the average baboon’s fang-like canines often reach two inches (5cm) in length—even longer than the teeth of most adult lions. Although these simian sabers appear fit to kill even the most intimidating prey, they are more often used in mating season fights among rival males—suggesting that it was sexual selection which led to the development of oversized fangs. But this doesn’t afford much comfort to those who stray into baboon territory.

The hippopotamus may reach a length of more than sixteen feet (5m), and can put on an incredible nine thousand pounds (4000kg) in weight, making it the third-most massive land animal. The hippopotamus (to avoid the contentious plural) also has the largest canines of any land animal, with two sword-like teeth that reach a whopping sixteen inches (40cm) in length.

Essentially, we are dealing with a truck-sized river monster with teeth capable of running through two humans in one bite. And we grew up thinking that crocodiles were our biggest enemies on the Nile…   In one notable case, a tour guide was partially swallowed by a hippopotamus, and his arm was lost. And in a final fascinating twist, genetic research has shown that these saber-toothed creatures are relatives of whales, rather than pigs as once thought. 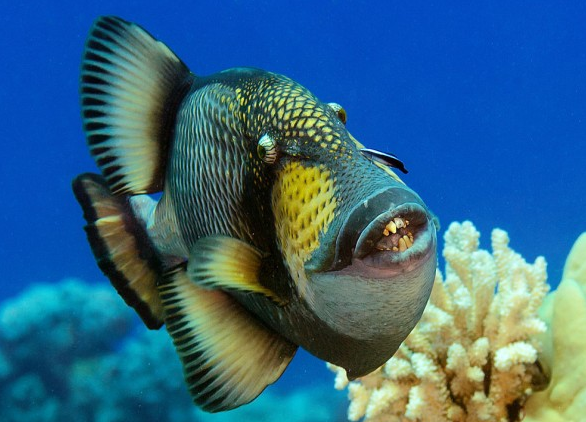 With a name like that, anything is possible—this is one fish you do not want to meet on a diving trip. Reaching well over two feet (60cm) in length, these tropical reef inhabitants can be found in shallow waters. They are known to fiercely defend their territories against intruders, including human explorers. Triggerfish teeth—their purpose being to crush rock-hard coral—are shockingly sharp and powerful, and appear almost human-like.

Triggerfish teeth are unusual in that they are straight yet extremely thin. This makes them exceptionally sharp, yet they’re also extremely strong, and resilient to damage.