Waterboarding is a form of torture that is as unbearable as it is cruel. It is the act of forcing water into the sinuses, pharynx, larynx, and trachea to simulate the feeling of drowning.[1]

When it came to light that the Bush Administration of the United States was using waterboarding to torture terrorists—and even suspected terrorists—into compliance and as a measure to gather intelligence about the simultaneous wars in Iraq and Afghanistan, the world was shocked and horrified. Author for Vanity Fair and public intellectual Christopher Hitchens underwent waterboarding in 2008. Hitchens would walk away from the experiment shocked and terrified at what was being carried out on live individuals, once remarking, “If waterboarding isn’t torture, there’s no such thing as torture.”

No doubt, we’re all familiar with that horrifying feeling of drowning when we stay under the water a little too long: Your lungs begin to run out of oxygen and flutter as your limbs begin to tingle and your mind begins to race. Then you begin to shake, and full-on panic sets in as the body uses up the last of your oxygen. The last, and most terrifying, thing you may feel is water flooding down your throat. Well, that’s exactly the feeling that waterboarding is supposed to simulate identically, or nearly identically, and it is insanely terrifying. Here are ten facts about waterboarding, the nightmarish menace of simulated drowning. 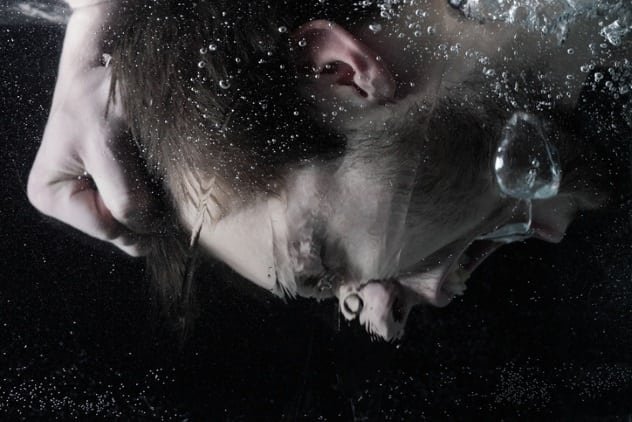 Waterboarding has a rich history, beginning with a more broad category: water torture. Ancient and modern history are replete with tortures that employed water. A simple method is simply exposing a victim to dripping water over a long period of time. Various forms of forced submersion may be employed, or someone might be left in water and expected to continue to swim until they simply physically can’t, their bodies finally giving in to exhaustion as they drown. Of course, we’ve all seen action or mafia movies in which one person submerges another’s head in a sink, bathtub, barrel, or some other container of water or liquid and physically drowns them, forcing their head completely into the liquid. Then, at the last minute, if the torturer is seeking information from the tortured, he pulls the victim’s head back out of the water and starts asking a few questions—then the process repeats.

While these methods are rudimentary predecessors to waterboarding, if we define waterboarding solely as the act of forcing water into one’s mouth or nose to create the sensation of drowning, many water tortures could be argued to count as waterboarding. The modern rendition, however, is significantly more terrifying, in that the water is poured down onto the head, into the mouth and nose, to create a never-ending sense of drowning. Waterboarding was first documented in the 14th century.[2] 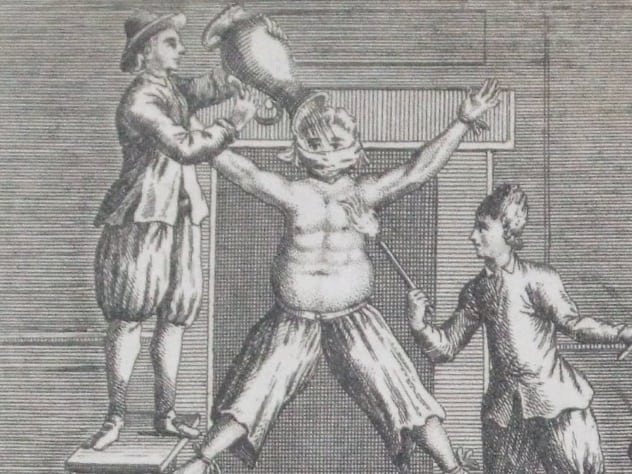 Where else in the vast literature of human history would someone turn to first in order to find information on waterboarding (or any torture method, really) besides the Spanish Inquisition? According to literature, waterboarding, referred to as toca, was a popular method of torture during the Spanish Inquisition, complete with extremely well-designed and well-engineered devices to torture someone with.[3]

The Spanish torturers would tie a victim to an elaborate contraption in hopes of obtaining a confession. A cloth would be placed over the victim’s mouth, and water would be poured onto the cloth, running through the cloth and into the victim’s mouth, which would quickly become full with water. A jar would also be kept handy so that when the victim would spew up water in an attempt to gasp for oxygen, the jar (or jars) would be there to scoop up the water and pour it right back onto the cloth.

As early as 1800, waterboarding was already beginning to be considered a cruel, unusual, and horrendous torture which should never be used by churches, militaries, or governments, due to the awful and repugnant nature of it. 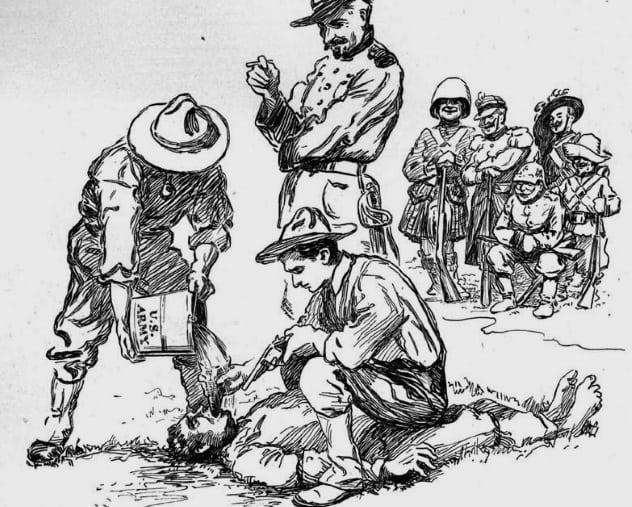 Waterboarding would make its way to the Philippines through trade and conquest as Spain colonized the islands. And this is where the United States would first begin waterboarding people (not counting prison inmates back home) as early as 1902, during the Philippine-American war. A famous Life magazine cover from that year featured US soldiers stationed in the Philippines torturing people.

Even then, waterboarding was such a horrific form of torture that it created a stir, and people were both shocked and outraged at its use.[4] President Theodore Roosevelt would send a cable to the commander of the United States Army, urging him to curb the practice, among others which were deemed cruel and unusual punishment. Lieutenant Grover Clint would go on record saying about the form of torture: “A man suffers tremendously, there is no doubt about it. His sufferings must be that of a man who is drowning, but cannot drown.”

Imagine, for a moment, being stuck somewhere in between not drowning and actually drowning, and then that hellish purgatory continues on for minutes or even hours. In more recent times, a Saudi Arabian man was reported to have been waterboarded repeatedly for over two and a half hours. 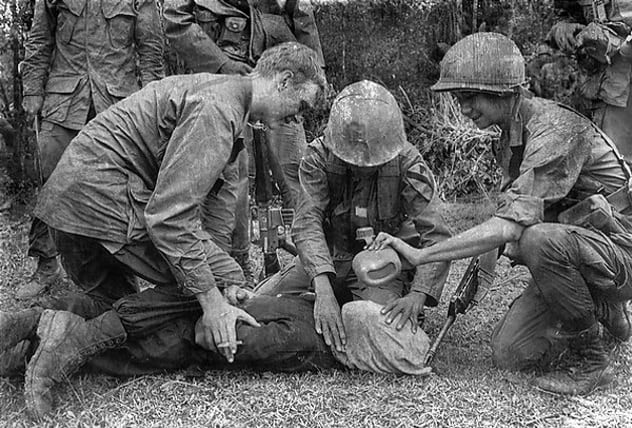 The Philippines wouldn’t be the last use of waterboarding during war in Asia and wouldn’t even be the beginning of the end of its use by the United States. The Vietnam War would bring new causes, new bloodshed, and new intel that needed to be gathered, and with all of those, of course, came new opportunities to waterboard people. The front-page picture on the January 21, 1968, edition of The Washington Post included a caption which described “a flooding sense of suffocation and drowning, meant to make [the victim] talk.” The image showed American soldiers waterboarding a captured North Vietnamese fighter.

The soldier pictured in the photo performing the torture would later be court-martialed.[5] So horrendous was this torture that a nation which was striking thousands of people with napalm decided that waterboarding was cruel and unusual punishment; let that one sink in.

In a typical waterboarding scenario, a person is laid on a surface that is able to be adjusted so that their head becomes slightly lower to the ground than their feet, tilting them at a 15- to 20-degree angle so that water can be easily administered to the face. They are tied down, often with straps, or sometimes simply held down by several individuals. As has been done since the Spanish Inquisition, a rag is typically placed over the victim’s face to keep water clinging to it.

Water is then subsequently poured onto the rag, or directly into the victim’s throat and nose, which deprives the victim of oxygen quickly and begins to simulate a never-ending feeling of drowning, while the victim inevitably struggles to stop the stream. The use of a cloth or plastic over the face will essentially act as a one-way valve, allowing exhaling but preventing inhaling.[6] 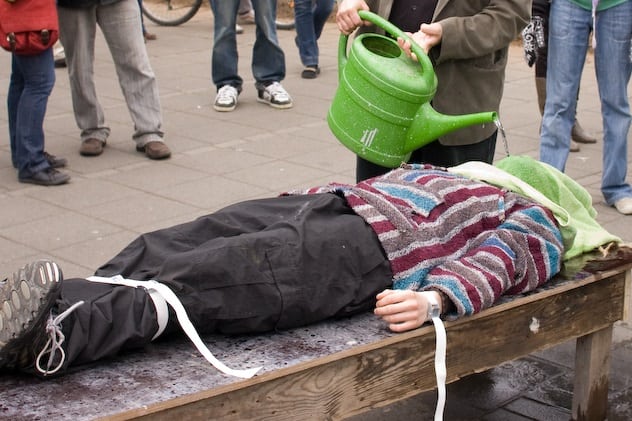 When someone drowns, they remain conscious until the very last minute, when they lose consciousness due to a lack of oxygen in the bloodstream. The moment this happens, the drowning victim ceases to struggle and (usually) aspirates some water.

However, with waterboarding, the loss of consciousness can happen over and over and over again. Waterboarding almost always ultimately results in a loss of consciousness.[7] This is generally when the water flow is stopped, and the victim is resuscitated . . . only for the flow of water to begin again, along with the agonizing terror that comes with the sensation of drowning. Can you imagine what that must feel like? 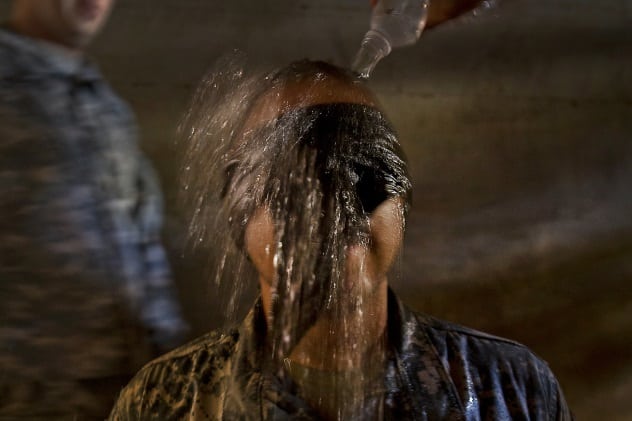 Ramon Navarro was the victim of a Japanese war criminal named Chinsaku Yuki, who tortured him through waterboarding. During Yuki’s trial in 1947, Navarro described what the torture did to him. He remarked that it wasn’t painful, “but one becomes unconscious—like drowning in water.”

To add to the bizarre sensations of waterboarding, sometimes the water is chilled or iced to make it more shocking when it hits and enters the body. When strapped down to a bed or gurney, many people suffer injuries to their arms and legs, as they struggle hard against their restraints to stop the feeling of drowning which is overcoming them. Injuries can be sustained throughout the body, as the victim uses every muscle to attempt to escape. Sufferers describe the water pouring down their noses as both painful and terrifying.[8] One can only imagine the horror of being waterboarded. 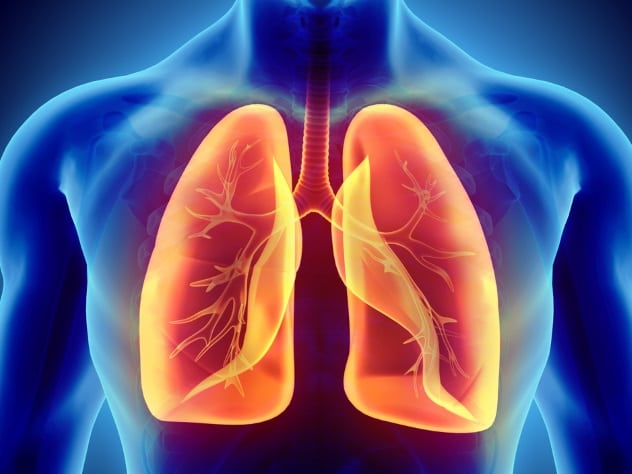 In addition to the injuries caused by struggling, waterboarding can brain damage due to oxygen deprivation as well as damage to the lungs. In general, water is not meant to actually enter the lungs during waterboarding, but some victims have reported it happening. One person experienced this when he was waterboarded simply by having water poured into his nose while his mouth was obstructed by the interrogator’s hand. When the victim couldn’t hold his breather any longer, he inhaled, and the water went into his lungs. He described the torture he endured as worse than the traditional waterboarding technique.

A less common waterboarding practice involves forcing water into the stomach, which causes intense pain. Chinsaku Yuki sat on Ramon Navarro’s stomach to force the water back out through his mouth and nostrils—only to begin the process of filling the internal organs with water again.[9] Of course, the sinus cavities fill with perpetually running water. If waterboarding is done long enough, the victim will die, even if no water reaches their lungs. 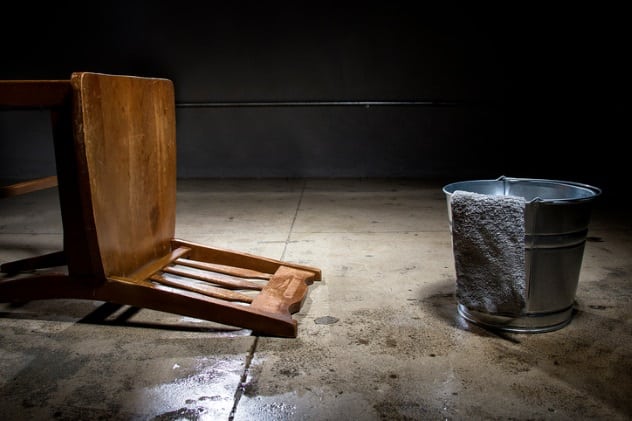 The Geneva Conventions are a series of treaties signed and established by various nations to attempt to mitigate the horror of war on both soldiers and civilians alike. The conventions have outlawed what has been deemed too torturous for people to go through and be able to return to life in any sort of fashion that resembles normal. Under the Geneva Convention of 1929, and again in 1949, waterboarding officially became a war crime and its practitioners war criminals.[10]

Since its inception, waterboarding has had a very rocky history. Its employment has frequently caused public outcry, reaffirming its status as a horrible torture method, one that should never be used. 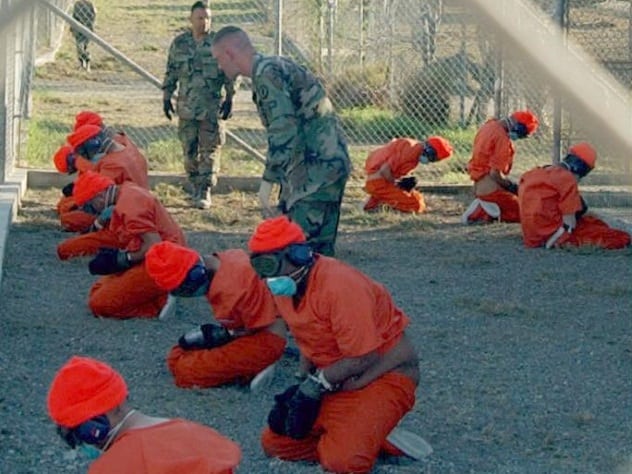 The illegality of waterboarding hasn’t stopped some of those who feel above the law. There have been reports of police forces and militaries using waterboarding as recently as August 2018 in England, when allegations emerged that two Royal Military Police cadets had waterboarded another.[11]

US president Donald Trump has suggested a supposed “need” to bring back torture in order to combat terrorism, specifically waterboarding. This comes even after the massive scandal over the Bush administration employing waterboarding both overseas and in the United States.