The dangers presented by a tiger or Great White Shark are immediately apparent to humans, and contributes to the persecution and decline of these species. However, we must look far beyond the obvious, for a host of unlikely, strange or lesser known creatures offer equally unexpected harm, and even death. Learn about the fish that may stab you to death, Ahab’s nemesis in real life, and a lethal forest rodent, or just how dangerous a Polar Bear or Elk may be. WARNING: This list contains an image of a spider. 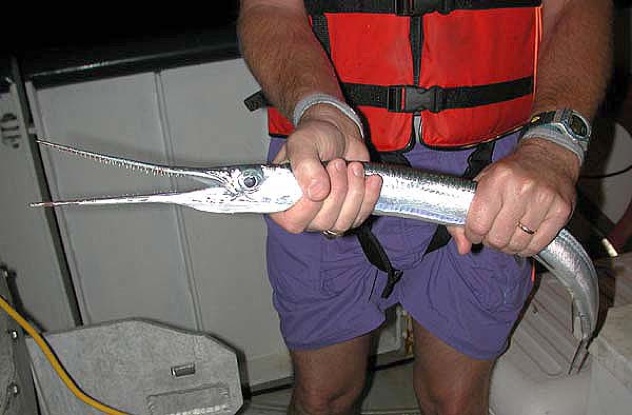 When wading cautiously into the ocean, any apprehension we experience likely forms the mental image of a shark, and the possibility of being bitten. However, a more bizarre danger lurks. Growing up to 3 feet in length, Needlefish are exceedingly thin hunters with an almost heron like bill. Needlefish may swim at speeds of over 30 knots, and may cause fatal collisions with humans. In 1977, a child was pierced by a needlefish in Hawaii, while fishermen in the Philippines fear them above sharks. Several other exceedingly disturbing deaths have followed, including one swimmer whose eye was pierced, causing a fatal brain injury. Needlefish beaks may break off inside a person. 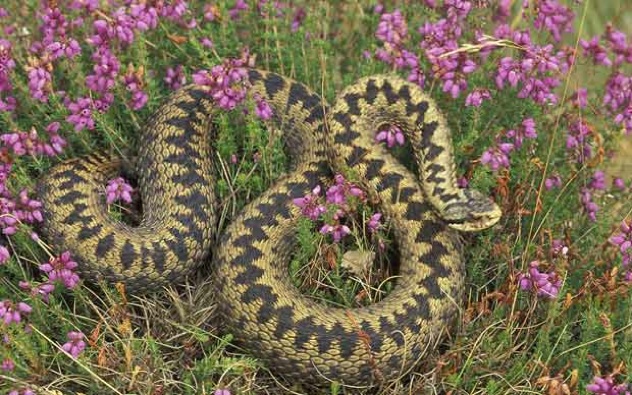 Although its lethality does not compare to the Cobra or Rattlesnake, the presence of a venomous and potentially deadly viper in Britain may come as a surprise. While nearly all venomous snakes occur closer to the equator, the Common Adder inhabits the hedgerows, meadows and moors of the English country side, and frequently bites humans when it enters gardens. Deaths are rare, so the snake is not considered especially dangerous, but over 10 fatalities have occurred in the past 100 years, and death is always a possibility when bitten by this English snake. Puff Adders grow up to a meter in length, and may feed on rodents and birds. 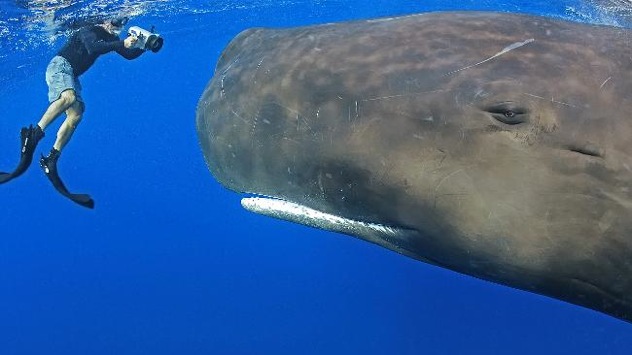 Moby Dick may not have been a subject of pure legend, after all. Growing to lengths of 20 meters, Sperm Whales are the largest toothed animal on the planet, and are capable of killing the largest of Giant Squid in spectacular, depth diving battles that rage thousands of meters below the surface. Humans once hunted the whales for their spermaceti for use in oil lamps, but narratives suggest the tables were sometimes turned. In 1820, the Essex and an auxiliary vessel were rammed by a Sperm whale, resulting in the death of crew members. More recently, a Sperm Whale rammed a small boat in Japan, resulting in one drowning. 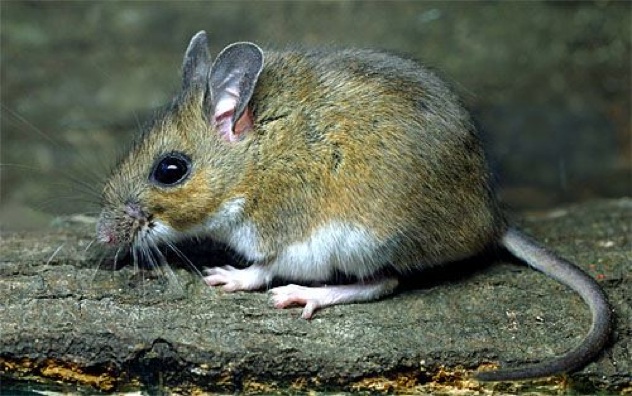 The scourge of Bubonic Plague is a thing of the past, but in the forests of Canada and the Northern United States, the exceedingly cute White-footed Deermouse patrols the leaf litter and seeks out sheltered tree stumps. Disturbingly, these rodents carry a deadly infectious agent known as the Hantavirus, which may kill up to 40 percent of those exposed to the virus, which is often contained in the rodent’s droppings. Deaths may occur when campers sweep a cabin floor where the mice have left droppings, causing the fine dust to become airborne. The virus may then attack the lungs. In one particular serious case, 4 campers died in California’s Yosemite National Park after deer mouse exposure. 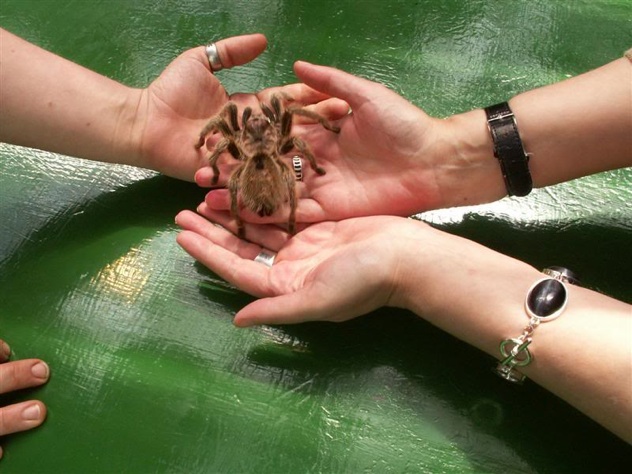 Tarantulas, especially the recently discovered giant species are frequently stereotyped as deadly animals, along with relatively benign boas and wolves. While their bite is in fact less serious than often believed, Tarantulas are by no means harmless, and present far more insidious threat to humans. Porcupines do not in fact shoot their quills, but the Chilean Rose Hair Tarantula is covered with fine and razor sharp “guard hairs” which it may shoot with great force towards a perceived threat. While death is unlikely, permanent vision loss may result if a pet handler or hiker approaches a Tarantula too closely, provoking hundreds of quills to be shot into their face, where they may lodge in the eyes. 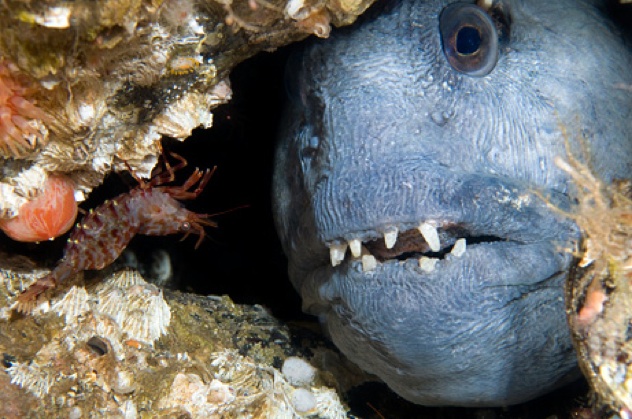 With a name like “Wolf Fish”, it should become immediately apparent that Hoplias aimara offers good reason to avoid stepping into the waters of the Amazon. With thick gray scales and lobed fins, the Wolf Fish may weigh over 80 pounds, and reach over a meter in length. What they lack in length, they make up in sheer width and strength. Using their massive jaws studded with dog like teeth, Wolf Fish hunt as lunge predators, and in several cases were reported to have seized humans who entered the water. The death of a dog was also attributed to this fish with both nature and the weapons needed to ravage its victims. The closely related Atlantic Wolfish, this species’ ocean going equivalent, is equally dangerous, and “may attack objects in the water with its powerful teeth” according to angler warnings. 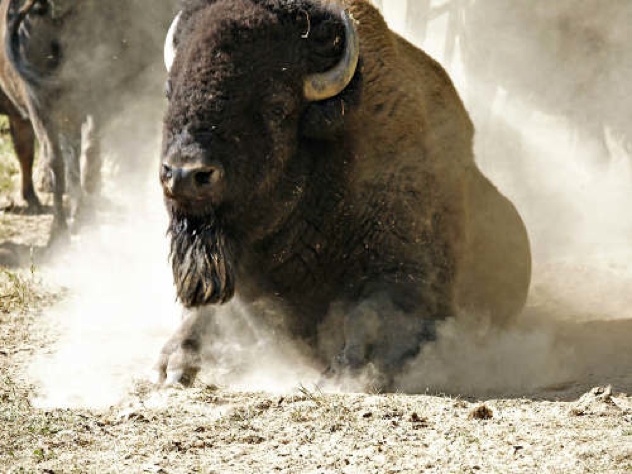 The American Bison is a common symbol of the Wild West, but its identify as a provoker of deadly duels between man and animal is lesser known. Weighing over 2,000 pounds and armed with deadly horns, the American Bison, which is technically not a true buffalo may trample or gore to death any human who finds its way into defended territory. In the early days of settlement, the Bison or “Buffalo” was considered a fearsome killer, on par with the highly respected Grizzly Bear. The Bison’s strength and speed in battering ram charges in response to a threat could pulverize a human victim, and ward off large predators, while a blow from the hoofs could also prove lethal.

While the concept of an angry bull may be well embedded in the human psyche, the Wapiti, or Common Elk is a lesser known but very really threat in the forest. Weighing up to 1,000 pounds, territorial male Wapiti possess a massive rack of antlers, while females are armed with equally heavy hooves and a highly protective attitude. During the rut and breeding season, human intruders face the risk of being gored to death or trampled by these giant deer. In one case, a snarling ungulate attacked a sledder, and he was only able to save himself by firing flares at the magnificent, yet beast. In one case, a farmer was killed by supposedly domesticated Elk. Perhaps Colorado’s Estes is a disaster waiting to happen. 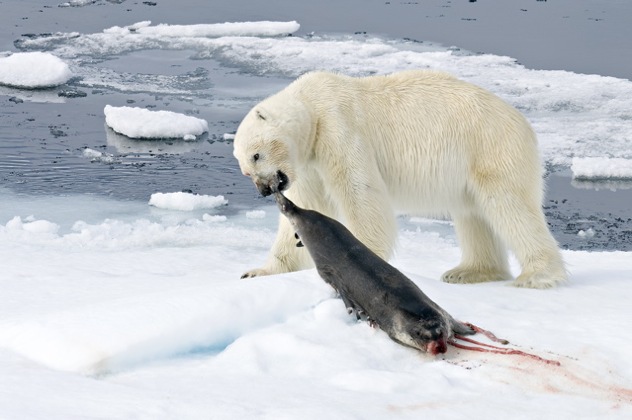 The Polar Bear, unlike some entries on this list is a well-known animal. But fame may be followed by misperceptions, and the cute, fluffy and often sad looking icon of the anti-climate change movement is actually a grave threat to human life as it stalks arctic communities. Polar bears are technically classified as a marine mammal, but they are also the largest carnivores to walk on land at over 1500 pounds. Capable of running at over 40 kilometers an hour, Polar bears are capable of rapidly killing any prey item they select. In some cases, Polar Bears have even torn into tents to extract human prey. A number of deaths have occurred over the years, but attacks are still uncommon due to environmental isolation. 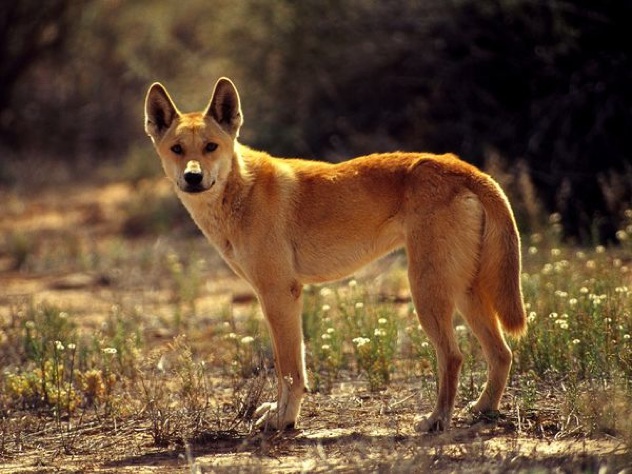 Legends such as Red Riding Hood give us the largely unfounded fear we bestow on wolves, the ancestors of domestic dogs. However, while wolves are unlikely to kill humans, a number of maulings and fatal attacks, largely targeting children have occurred in Australia, where the Dingo roams free. As Australia’s equivalent to the wolf, the 40-70 pound dingo is an apex predator with a bone crushing bite, and the ability to bring prey down in packs. Compared to a Gray Wolf, an aggressive Dingo may pose a greater threat to humans due to its increased habituation to man’s presence and opportunism. Territorial defense may have played a role in some fatal attacks.

Ron Harlan investigates of the mysteries of nature and the bizarre findings that often crop up on this planet. He is a freelance writer and student of science. Contact Ron for Custom Nature Tours – Canada.