Ever look at clouds and see a rabbit or a dog?  Or pop out a piece of toast and see the partially burnt face of Jesus looking at you?   This bizarre experience is called pareidolia—a psychological phenomenon whereby a sight or sound triggers something in your brain, persuading you that what you hear or see is something recognizable.

One well-known example of pareidolia involves seeing “the man in the moon”. But there are many more examples of pareidolia in space—and as our robots, spacecraft, and telescopes take more and more images, we’re discovering more space pareidolia daily. Here are ten of the most astounding examples: 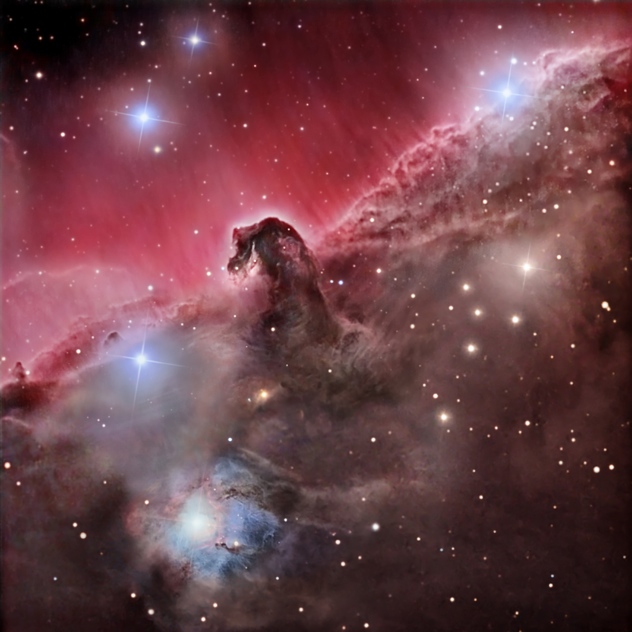 One of the oldest and most familiar examples of space pareidolia is the horsehead nebula, or Barnard 33, which is a cold and dark cloud of dust and gas silhouetted by the bright nebula IC 434. The Horsehead Nebula is located in the constellation Orion, and appears to be a side-on view of a horsehead.

First noted in 1888, it is 1,500 light years from Earth. The dark shadowing of the Horsehead Nebula is created by dust, but at the base of the nebula you can see bright spots which are young stars just being formed.  The bright star just visible in the top left side of the horsehead is a young star still embedded in the stellar nursery of gas and dust. The radiation from this young star is so powerful that it’s starting to erode the cloud—so millions of years in the future, the Horsehead Nebula may not bear any resemblance to its current form.

9
The Face on Mars
Mars 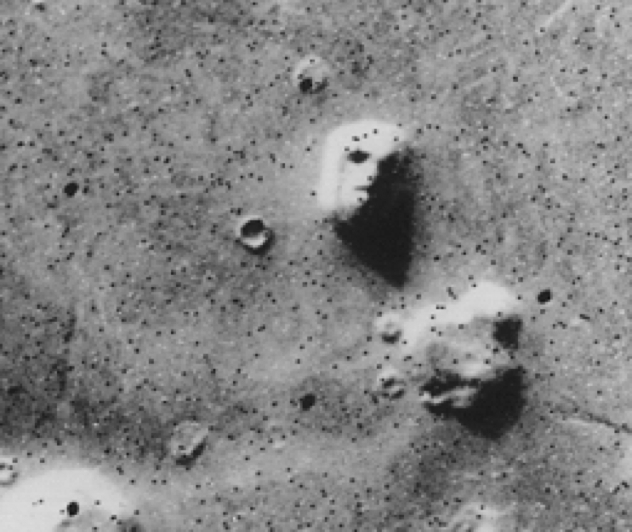 Another very well-known example of pareidolia in space is Cydonia Mensae, or “The Face on Mars”. On July 25, 1976, NASA released a series of images snapped by the Viking spacecraft orbiters. These images depicted the Cydonia Mensae region of Mars—a region of flat-topped mesa-like formations. The first image showed what appeared to be a human face looking skyward. This was originally dismissed as a trick of shadowing on the Martian rocks; a subsequent image, however, likewise showed what would become known as The Face on Mars—even with the sun at a different angle.

These images sparked decades of speculation about the possibility of life on Mars, and prompted talk of advanced civilizations which may have left behind giant, human-like memorials on the planet.

Twenty years later, however, Mars was visited by three more spacecraft which orbited the planet and took higher resolution images.  These better quality images proved that what appeared to be a giant statue of a human face was simply a normal Martian mountain, which—when seen with the correct shadowing and illumination—created pareidolia in the minds of the observers. 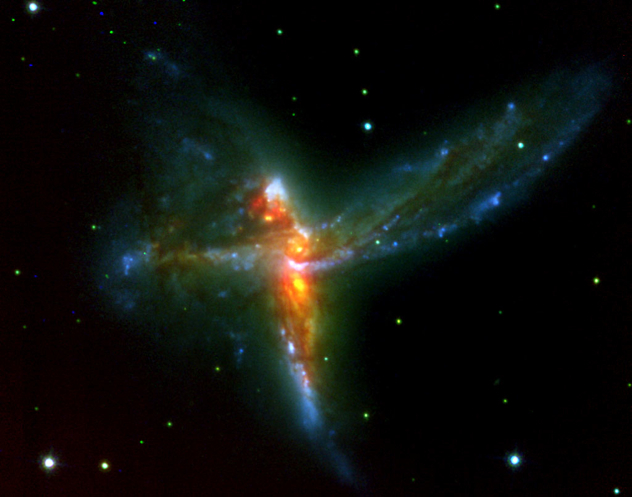 In an amazing image captured by the European Southern Observatory (ESO) Very Large Telescope, we can observe the collision of three different galaxies. Most interestingly, we can note the effect that each of them is having on the others. As the three galaxies collided, they have twisted, stretched, and pulled one other into a recognizable shape.  Is it Tinker Bell or a Space Hummingbird?  Whichever you decide, it is certainly a beautiful image.

7
The Elephant on Mars
Mars 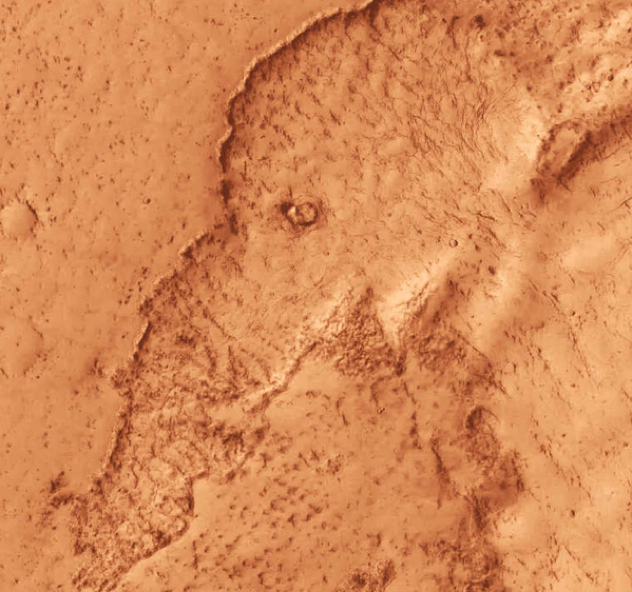 Mars is home to many examples of pareidolia, largely due to the fact that—like the moon—it is so highly photographed. Either that, or Martians have just been busy creating human-like structures for such a very long time. You decide.

Another example is the “Elephant Face”, which resembles an elephant head in profile, complete with an eye and an elongated elephant trunk. The image was taken by the Mars Reconnaissance Orbiter, and was intended to capture a lava flow in Elysium Planitia. 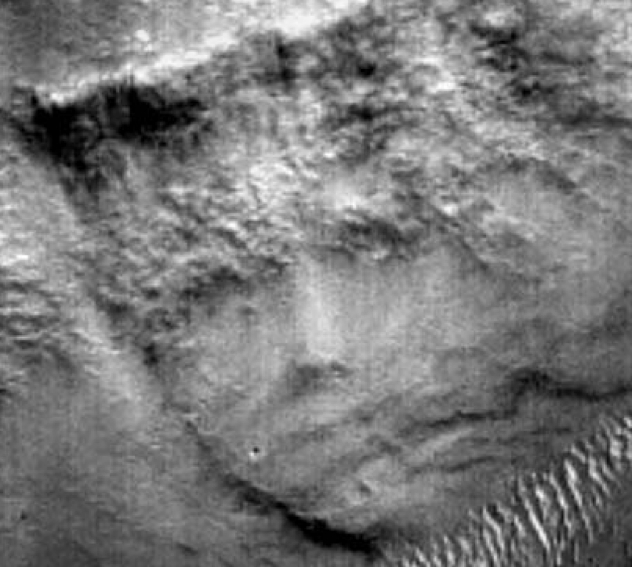 It seems to me that “The Face on Mars” looks more like the human alien in the film “Prometheus” than any real human. But another pareidolia on Mars, located in the Libya Montes region, looks more genuinely human.

It appears to be an almost classical Greek or Roman face, complete with a crown, and it is often imaginatively referred to as “The Crowned Face”. Remarkably, most people can “see” the Libya Montes face in many different kinds of light. 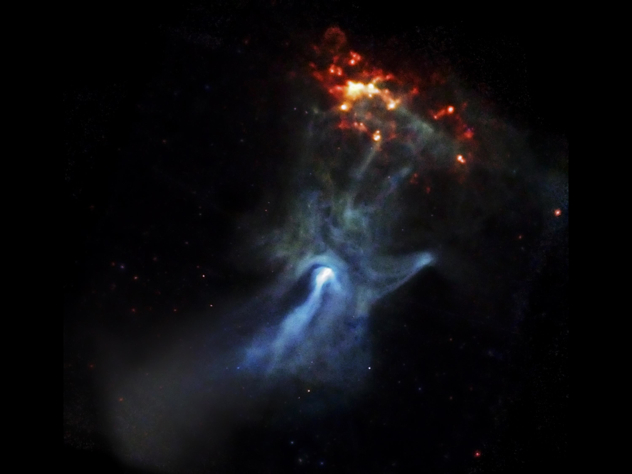 In what I believe to be one of the most beautiful examples of deep space pareidolia, we have an image taken of a pulsar called PSR B1509-58. The image of the 150-lightyear-wide nebula was captured by the Chandra Observatory telescope.

The rapidly rotating neutron star, or “pulsar”, is only twelve miles across—yet it has enough power to twist and sculpt the space around the nebula into the beautiful hand-like object we see in the photo. This hand appears to be almost reaching out to touch space itself. 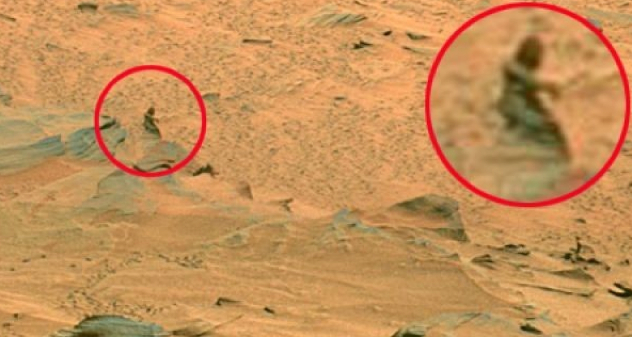 Another recent example of Martian pareidolia involved a human-like figure, caught in mid-stride (almost Bigfoot-like) as it ambles across the Martian surface.  Or is it a Martian mermaid, sitting on a rock with its tail laid out?  The original image was taken by the Mars Spirit rover on the surface of what scientists have dubbed “home plate”, a ninety mile (145km) plateau region in the Columbia Hills of Mars.

The photo was responsible for all manner of conspiracy theories, accusing NASA of attempting to cover up clear proof that life exists on Mars. According to one astronomer, however, the photo depicts nothing but “a funky little bizarre wind-carved rock formation.”

When viewed as part of the complete rover image, you can see just how tiny the “Mars Mermaid” or “Martian Bigfoot” really is—about six centimeters tall.

Mimas, one of Saturn’s moons, was already the famous owner of one example of pareidolia. When the Voyager spacecraft returned images of Saturn’s moons in the early 1980s, only several years had passed since the release of “Star Wars Episode IV: A New Hope”. This film, as many of the readers will know, featured the gigantic “Death Star”, with its powerful radar dish-like super laser. So when people saw the Voyager images of Mimas for the first time, and in particular the giant crater “Herschel”, they instantly recognized the similarity between Mimas and The Death Star.

But Mimas had a second example of pareidolia in store for humans—this one even more strange than the first. When the Cassini spacecraft orbited Mimas in 2010, it used a thermal infrared spectrometer to map the planet in infrared. What they saw in the images baffled the scientists—and was instantly recognized by ordinary citizens as a giant depiction of the arcade game Pac Man.

The colorful map’s yellow spots have the highest surface temperature, and its blue spots have the lowest. Scientists were baffled because they expected the higher temperatures to be along the equator of the moon, where the sun was shining directly on Mimas when Cassini flew by. Instead, Mimas proved once again that the moons of our solar system are fascinating of their own account—for the exact opposite was found to be true.

Scientists speculated that the strange results may have been caused by different densities in the ice covering the moon’s surface. Another scientist was quoted as saying: “it has to be a thermal inertia thing.” Sure. 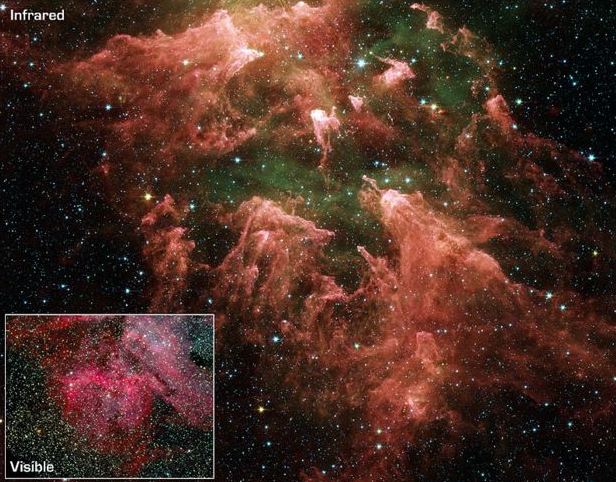 In this picture, your eye might naturally drift to the center—and if so, you’ll find yourself looking at what I call “Space Wood”, a pareidolia of phallic-like protuberance.

Taken by NASA’s Spitzer Space Telescope, the photo shows a region of young star formation in the Eta Carina Nebula. Spitzer has captured a stellar nursery in action more than ten thousand lightyears away. Thick, huge, dark pillars of dust (in pink) house young stars being formed (in white and yellow). With infrared, Spitzer can show how the young stars destroy the clouds of gas and dust from which they are born. In fact, the image shows a titanic battle between older “first generation” stars, and the young stars still being formed.

One interesting first generation star in the system is Eta Carinae, which pumps out more energy than one million of our own suns.  In the 1840s (bearing in mind the slight delay), Eta Carinae put out a burst of so much energy that it temporarily became the second-brightest star in the heavens. 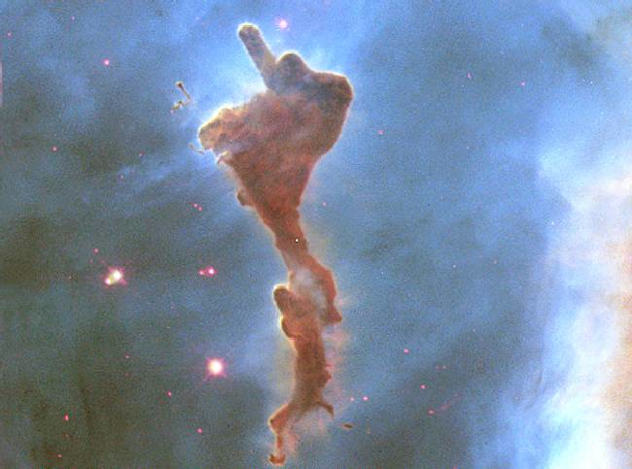 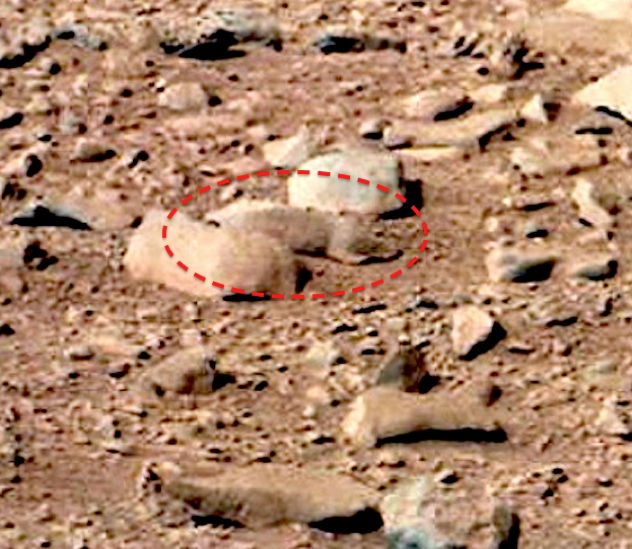 Even while I was working on this list, a new example of pareidolia popped up. The Mars Curiosity Rover snapped a photograph of the Martian terrain, and someone with a lot of free time found what appears to be a lizard, or long-tailed rat. Is there enough water on Mars to sustain small animals?  Is it possible that a lizard or rat, similar to our own, could evolve and live on Mars?  Or is it merely the case that NASA is secretly shipping freeze-dried rodents and lizards on board the rovers so they can be dropped off for future “discovery”, and hence, government funding? Once again—you decide.

Patrick Weidinger has been a contributor of lists to Lisverse for over three years. His list topics frequently involve tales of history, science, and survival.