Everyone knows about the iconic Venus fly trap, and many people have heard of – or even cultivated – common sundews, pitcher plants and a few other bug-catchers, but predacious vegetation takes many forms even seasoned botanists are still puzzling over, and some have even begun to abandon flesh-eating for even odder alternatives. 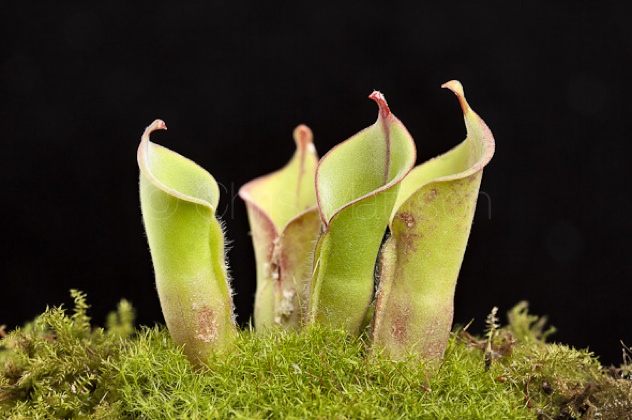 The sun pitchers, or Heliamphora, aren’t directly related to other well known pitcher plants, but attract and kill insects in much the same way. Only a few species produce any kind of digestive enzyme, relying primarily on symbiotic bacteria to break down prey. Most species inhabit extremely rainy environments at high altitudes, and grow a small slot to drain excess water. 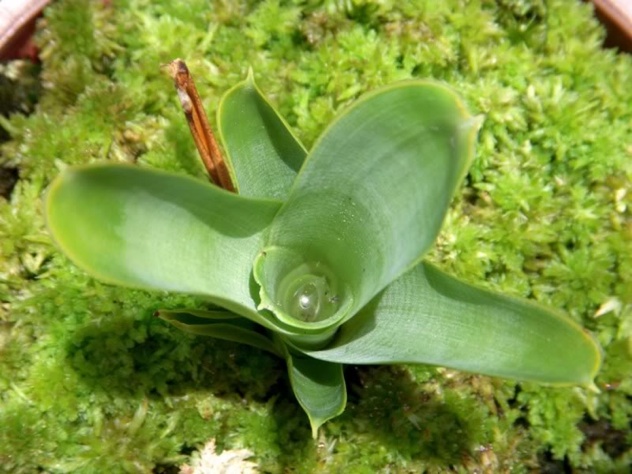 Many are familiar with Bromeliads as common house-plants, their leaves forming a central basin capable of holding water. Few know that certain species are considered at least partially carnivorous, actively attracting insects to drown in their collected fluid. Some appear to rely on the natural decomposition of prey corpses to provide them with sustenance, while others, like Brocchinia reducta, produce at least one enzyme associated with active digestion. It seems likely that with time, these plants could one day evolve more sophisticated techniques and become full-time insectivores. 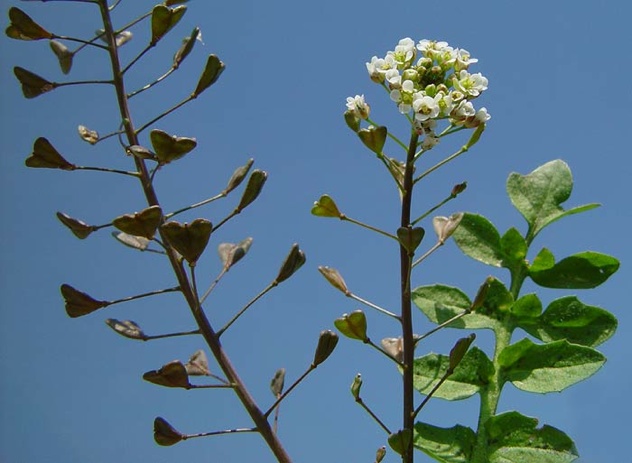 Capsella bursa-pastoris, or “shepherd’s purse,” doesn’t look like a carnivore at first glance, and in fact, its carnivorous nature is still only a hypothesis. The seeds of this plant, and only its seeds, secrete an extremely sticky substance when wet, and at least one study proved that when submerged, the seeds were extremely attractive to mosquito larvae, which very quickly died and appeared to provide the seed with nourishment. As the plants prefer fairly dry environments, it’s not likely they would normally feed on mosquito larvae in the wild, and their effectiveness at trapping or consuming other prey is a little less certain. Like the bromeliads, it could be that these weirdos are simply evolving towards or away from a more sinister lifestyle. 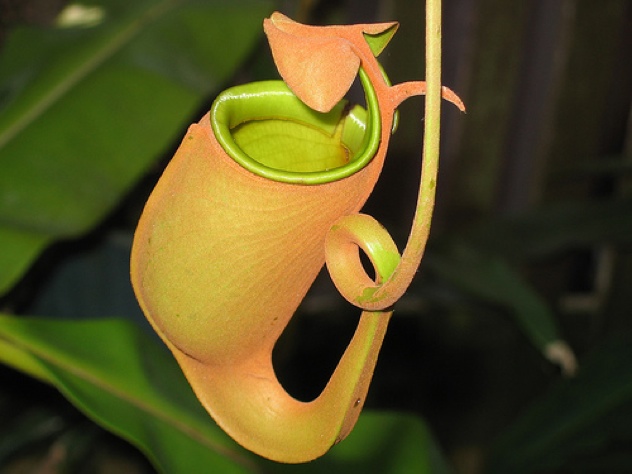 Like most pitcher plants, Nepenthes bicalcarata employs its fluid-filled, vase-like leaves to lure, drown and digest unwary insects. Unlike other pitchers, however, this wickedly “fanged” species lives in intimate symbiosis with an unusual species of ant, Camponotus schmitzi. Colonizing the pitcher’s thick, hollow stem, these uniquely amphibious ants can submerge themselves in the watery traps for extended periods of time, swarming much larger insects even as they struggle to escape their watery grave.

It was long thought that this relationship was more on the parasitic side, but we now know that N. bicalcarate benefits considerably from the ant’s presence; the tiny terrors only make the trap deadlier, harder to escape and more efficient, processing food much faster than the plant’s natural enzymes. The feces, corpses and any other waste products of the colony also become food for their plant host, so in the long run, every trapped insect still becomes fertilizer one way or another. 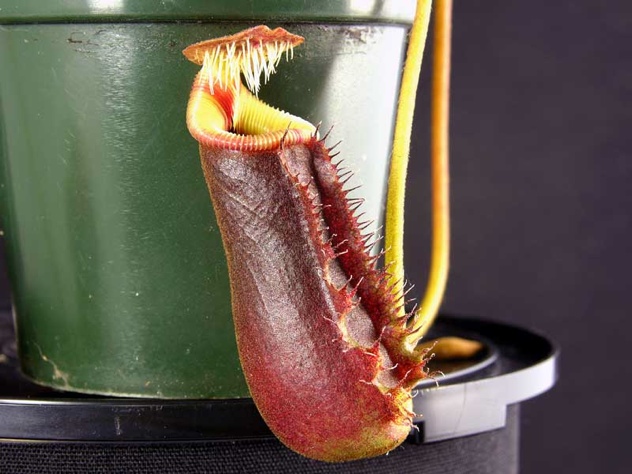 If this strange looking pitcher reminds you of a commode, it should; though capable of trapping and digesting live prey, this species has adapted over time to an even more abundant and far more disgusting food source; its sweet, sticky secretions are also attractive tree shrews, and seem to have fast-acting laxative properties. Some lowii specimens studied in 2009 appeared to have been subsisting exclusively on tree shrew feces, and also made use of stray bird droppings caught in their gaping gullets. 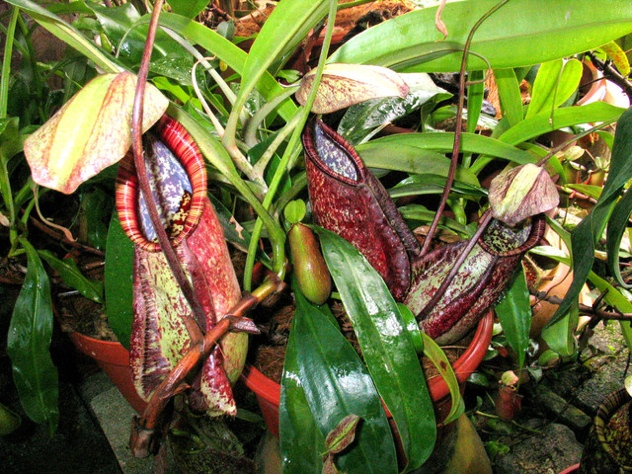 Nepenthes rafflesiana is another pitcher plant that relies primarily on animal feces, but in a much stranger fashion than Nepenthes lowii. The pitchers of this plant have adapted into perfect roosting locations for Hardwicke’s woolly bats, up to three of which may fit in a single pitcher. The plant is still a death pit for insects, which is part of what makes it such a cozy sleeping bag, helping to protect the bat from blood-sucking parasites, but as this symbiotic relationship evolved, bat guano became a much richer and more desirable food source for the plant. 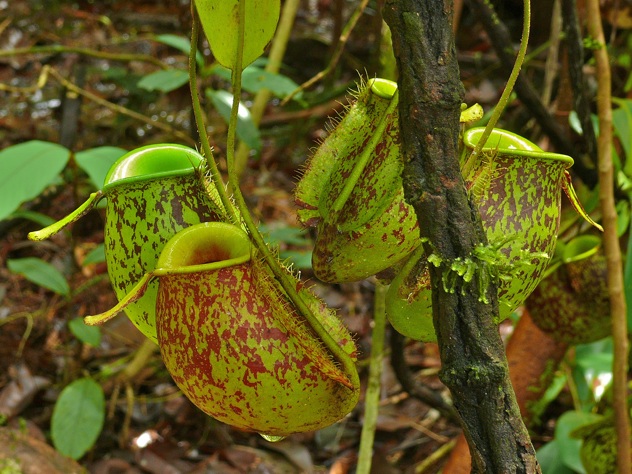 Like the dung-eaters, Nepenthes ampullaria is still technically a carnivorous plant, but has evolved to derive much of its food from alternative sources, boasting a number of unique adaptations for digesting leaves, petals and other vegetable matter that falls into its trap. Other pitchers would only get clogged by such unwanted rubbish, but ampullaria has repurposed its death-trap into its own personal compost bin, and can happily survive on very little else. Mosquito larvae and other aquatic insects may even colonize these living trash-cans and assist in the breakdown of collected litter. 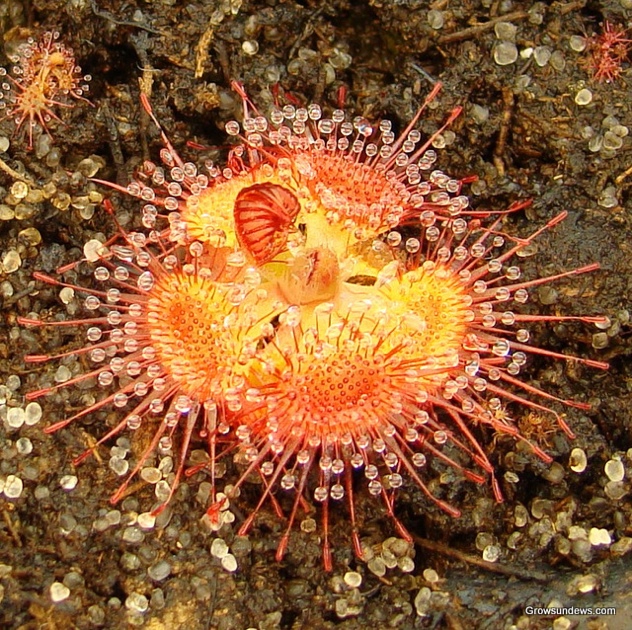 The sticky sundews are usually rather easygoing killers, letting their droplets of glue do most of the work and curling around prey in extremely slow motion. Some species, however, are armed with long, sensitive “snapping” tentacles. When stepped upon by an insect or otherwise disturbed, the tense appendages coil up with blinding speed, and enough force to physically throw small prey into the stickier trap-tentacles, like a series of small catapults.

Fungi are no more plants than they are animals, but they’re organisms we’ve long thought of as another form of “foliage,” and the notion of a killer meat-eating fungus seems even stranger than a predacious plant. Several types of fungi, even some common mushrooms, are carnivorous on a microscopic level, their subterranean Mycelia lined with noose-like hoops. When a nematode worm passes through these lethal rings, specialized cells cause them to inflate, tightly constricting the minute animal and holding it in place to be slowly consumed. Since production of these complex rings can be rather costly, these fungi generally only grow them once they have detected the presence of suitable nematodes in the surrounding soil, essentially setting out traps once they have “smelled” food. 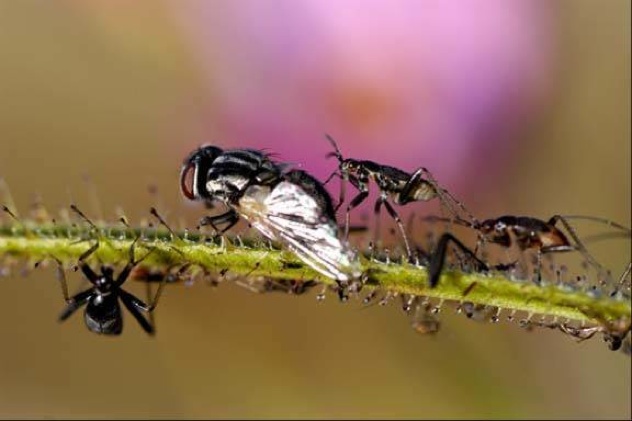 Considered one of the world’s largest carnivorous plants, Roridula can reach an amazing six feet or more in height, most of its surface covered densely in short, glue-tipped tentacles like those of a sundew. It’s not the plant, however, that insects need to worry about; Roridula’s gooey leaves are naturally inhabited by a completely unique genus of predatory assassin bug. Anything mired in the plant’s slimy grasp is at the mercy of these little beasts, who work together to overpower even far larger prey and suck them dry of nutrients.

Not only is Roridula protected from small pests by a rather terrifying security team, it also extracts nutrients every time its bug minions defecate on its foliage, feeding indirectly on their slaughtered victims.