Think plants are just boring green things that we use for food and decoration? Think again! Plants have lives that you’re probably totally unaware of.

Humankind has grown up alongside plants, and we’re quite used to seeing them just sitting there, not doing much of anything. For that, we could be forgiven for viewing plants as inanimate objects that aren’t capable of anything other than growing taller, getting eaten, and shriveling up. However, members of the plant kingdom are capable of some pretty awesome things. Let’s explore a few, shall we? 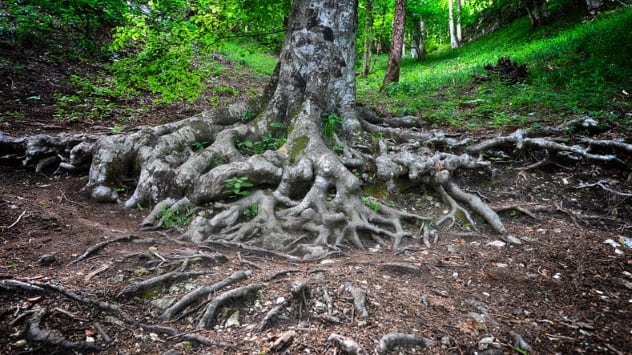 Trees are fairly inconspicuous upon first glance: branches lightly blowing in the breeze, woodland creatures nesting in their trunks. So you’d probably be at least a little surprised that the docile tree that we’re so used to seeing is likely having a full-blown conversation under your feet. Researchers have discovered that plants have the ability to communicate with an underground network made up of fungi.

This network of fungi serves the plant in multiple ways. One study found that tomato plants were able to use the fungus web to warn each other of harmful blight infestation. Another study found that trees connected through the fungi network could transfer nutrients to and from each other. Suzanne Simard of the University of British Columbia first found evidence of this in 1997 and also believes that larger trees transfer nutrients to smaller saplings to help them to survive.

Not only that, but they can also undermine unwelcome plants by spreading toxic chemicals through the fungi.[1] In short, trees are capable of sending messages, sharing resources, and spreading malware; sounds like the plant world had the Internet figured out long before we did.

9 Sending Out An SOS 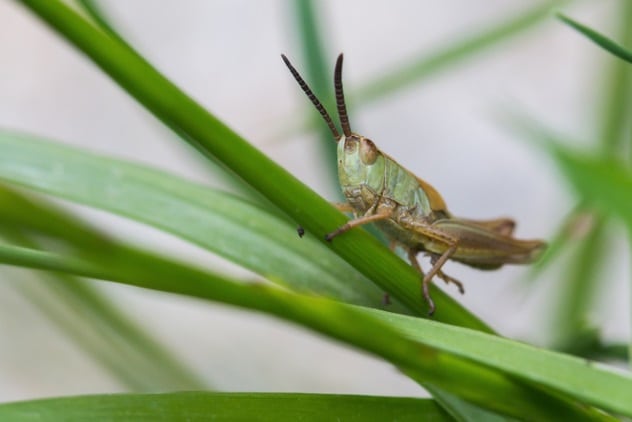 You would think that living in the middle of a remote forest would make it difficult for help to arrive when needed, but that’s not the case for plants. They may be immobile, but they’re definitely not helpless when it comes to invading herbivorous insects.

Some plants have a rather impressive line of defense against being eaten: When they sense that they’re being munched on, they release a chemical into the air that attracts the invading insect’s natural enemy.[2] The enemy swoops in and attacks the bug, thus saving the plant from being devoured. This is basically the plant kingdom version of getting your older brother to beat up that kid who steals your lunch money.

8 The Forest Made Of One Tree 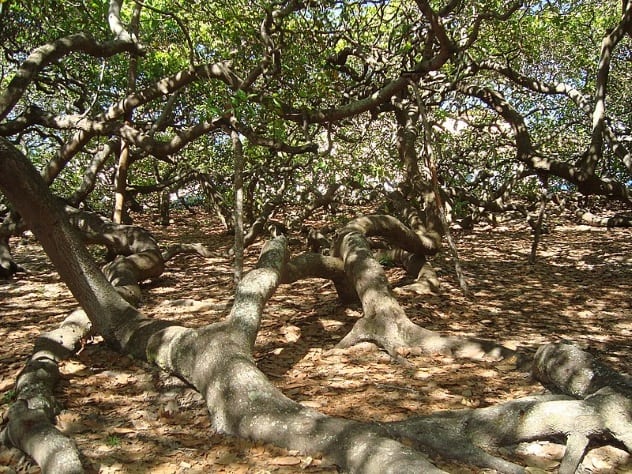 Nature is full of surprises. Just when she has you believing that it takes several trees to make a forest, bam! You get hit with the largest cashew tree in the world, found in the city of Natal, Brazil. Planted in 1888 by a local fisherman, this tree covers about 7,500 square meters (81,000 ft2) and has a perimeter of about 500 meters (1,600 ft). That’s about the size of 75 tennis courts. The Natal cashew tree currently holds the Guinness World Record for largest cashew tree in the world.

So what makes this tree so gargantuan? It has two unusual genetic traits that cause it to grow like it does. For one, the branches grow to the side instead of upward. The second anomaly is kind of freaky: The side-growing branches eventually get so heavy that they touch the ground. But instead of just resting there, the branches sprout roots. The newly rooted branch then starts growing upward as if it were a new tree. During harvest time, it’s estimated that the tree produces more than 60,000 cashew fruits.[3] 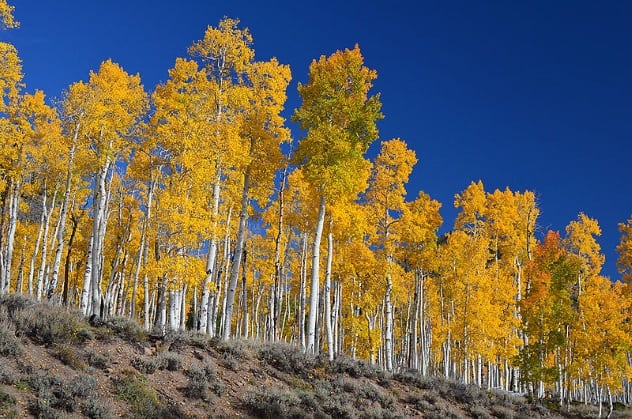 Pando is another prime example of how nature can mess with your mind when it comes your ideas of what a single tree should look like. Located in the Fishlake National Forest in Utah, Pando takes on the appearance of 47,000 quaking aspens.[4] However, the trunks are actually all part of the same gigantic root system, meaning that each one is genetically identical to the next. Pando reproduces asexually by simply sprouting new trunks.

Pando covers 107 acres and weighs 6,615 tons. It’s estimated to be at least 80,000 years old, with some generous estimates placing it at a million years. It was once thought to be the largest living organism on the planet, but that title now belongs to Oregon’s thousand-acre fungal mats. The quaking aspens have their name because the leaves tremble at even the slightest breeze.

When we think of acute sense of smell, usually predatory animals come to mind, like dogs and sharks. We don’t usually associate plants with having a sense of smell, but it turns out that smelling is yet another plant survival mechanism. According to botanist Daniel Chamovitz, plants can tell when their fruit is ripe, when a nearby plant has been cut down, or when their neighbor is being chomped on by a hungry insect. The parasitic spiny dodder vine can actually sniff out tomato plants. For that reason, tomato growers aren’t too fond of it. As the vine grows from a seedling, it senses the tomato plant, grows toward it, wraps itself around it, and slowly sucks out the tomato plant’s nutrition.[5]

How do we actually know that the dodder vine is “smelling” the tomato? Biologist Dr. Consuelo D. Moraes set up an experiment where she sat a fake tomato plant and an empty pot on either side of a growing dodder vine. It didn’t grow toward either pot. However, when she placed a real tomato plant next to a dodder vine, the vine grew toward it, even when the tomato was in the dark or hidden from view.

5 Plants Know What Time It Is 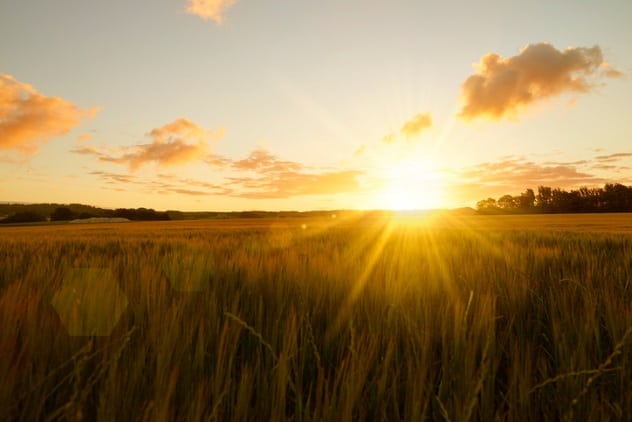 You might be aware that humans and animals have an internal clock that our bodies operate on called a circadian rhythm. But did you know that plants also have this clock? This means that they can prepare for certain times of day just like we do.

For example, plants don’t just react to light appearing at sunrise. They “know” sunrise is coming and they prepare for it biologically. In an important study, scientists from the University of Cambridge found that plants use the sugars they produce to keep time. These sugars help to regulate the genes responsible the plant’s own circadian rhythm.[6] So, in a sense, “wakes up with the petunias” is just as valid as “wakes up with the chickens.” 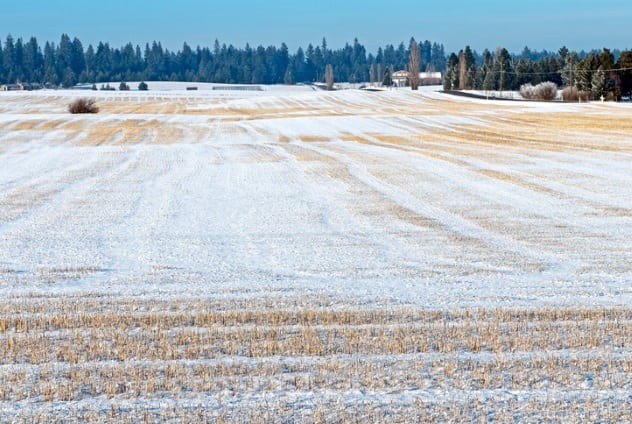 During the winter, if you drove past a field of wheat covered in snow, would you expect that the wheat would flourish in the spring? For a certain wheat variety called winter wheat, snow is essential for surviving cold winters. In fact, it can be even more useful than a rainy downpour.

Snow helps the soil to retain moisture and also insulates the wheat and soil against the chill.[7] Without the snow, the cold would damage the fragile plant’s roots, and the plants would wither and die just as if they were in hot, dry weather. So, for those of you who didn’t know that wheat could thrive because of snow, now you do! 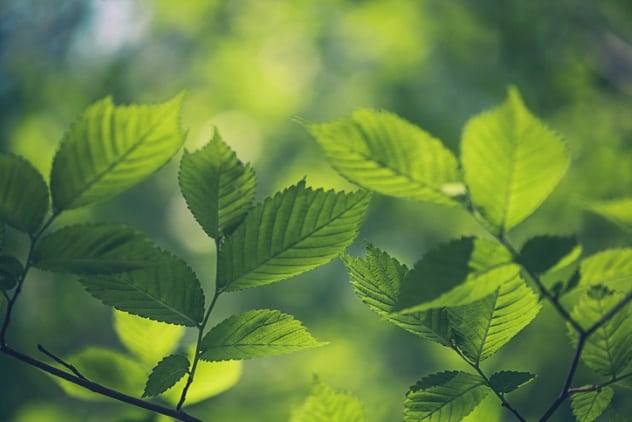 The idea of a seeing plant is nothing new. In the early 20th century, Francis Darwin, son of Charles Darwin, first suggested that plants had lens-like, light-sensitive cells. These cells were later discovered and called ocelli, but no one really talked about it much after that. Then, in 2017, two plant scientists, Frantisek Baluska and Stefano Mancus, pointed out that a certain single-cell bacterium functioned similarly to ocelli by detecting light. They suggested that if lower-level organisms could function in this way, then more highly evolved plants would likely retain such a useful feature.

There’s also recent evidence that some plants, such as cabbage, produce proteins that we know are involved in the production of eyespots. These are extremely simple eyes found in single-celled organisms like algae.[8] And then there are the just plain freaky plant abilities that we just don’t understand yet, such as how the climbing vine Boquila trifoliolata takes on the colors and shape of its host plant. Now that the idea of “seeing” plants is back in vogue, the evidence in favor of them doing so is stacking up. 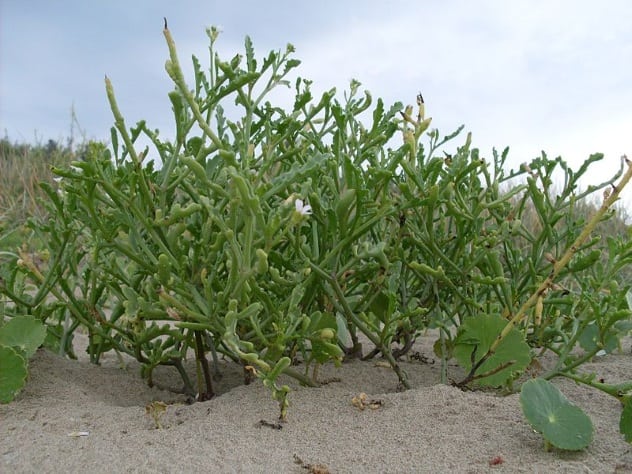 The unique sea rocket plant is strange enough as it is, with its fleshy leaves and ability to grow in beach sand. But that’s not all there is to this relative of the mustard plant. Even more interesting is that sea rockets are quite picky about their neighbors.

If a sea rocket senses that a plant growing close to it isn’t related, then it will sprout roots that aggressively suck up the nutrients in the soil.[9] If the plant in question is kinfolk, then the sea rocket refrains from its aggressive nutrient-sucking. Quite impressive, seeing as many members of the animal kingdom can’t recognize their own relations. 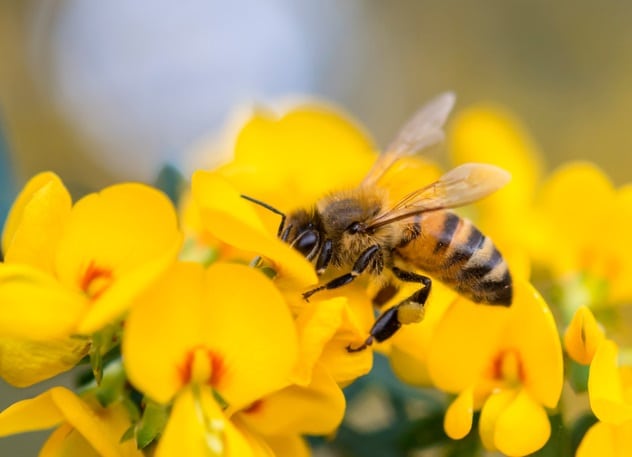 You know that fiendish caffeine addiction that keeps swarms of humans buzzing in and out of cafes to get regular coffee fixes? It turns out that bees are also hooked on the stuff, too. Apparently, 55 percent of flowering plants produce caffeine in their nectar. Bees are more likely to go to the caffeinated nectar, and they get really excited over it.

In an experiment published in the journal Current Biology, researchers filled two containers with nectar and added caffeine to one of them. Bees that drank the caffeinated nectar were more likely to perform the waggle dance for other bees upon returning to the hive, which is essentially how they tell the others about the quality and location of the nectar they find.[10] The caffeinated nectar caused the bees to dance more vigorously, indicating that the quality of the nectar was better than it actually was.

This isn’t surprising, since a lot of us use caffeine to at least appear enthusiastic about work. The caffeine-producing plants are likely to attract lots of bees, since the bee visitors give them such glowing reviews, thus assuring that their pollen gets spread around.

Tiffany is freelance writer from California currently living in Ghana. She loves traveling, chocolate, and geeking out over pop science topics.

Read more interesting tidbits about plants on 10 Startling Discoveries About Plants And Their Habits and Top 10 Fascinating Facts About Plants.