In addition to the previous list on 10 Mysterious Prehistoric Sites in the British Isles, there hundreds of mysterious locations spanning the entire globe.  Some are similar to the ones we’ve mentioned already, featuring stone circles and other megalithic structures—and others are entirely unique.  All of them are ancient—and they hint at the strong possibility that we don’t know anywhere near as much about our distant past as we think we do. 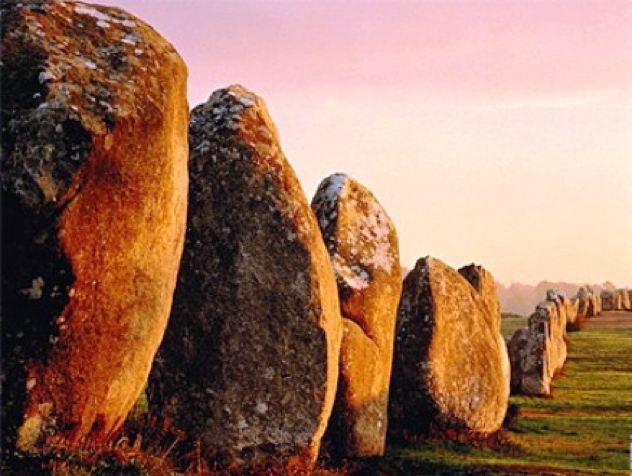 The Carnac stones are a dense collection of more than three thousand standing stones around the French village of Carnac—the largest such collection in the world.  The stones were erected between 4500 and 3300 B.C.

There is a variety of theories as to the purpose of the stones. Some claim that the stones are aligned astronomically, with the intention of creating an observatory or a calendar system.  Others believe that they were actually used as primitive seismic instruments, with the balanced stones acting as earthquake detectors.  The Carnac site is also thought to support the controversial idea of the “megalithic yard”, a theoretical common unit of measurement that was used to build most megalithic sites.

9
The Unfinished Obelisk of Aswan
Egypt 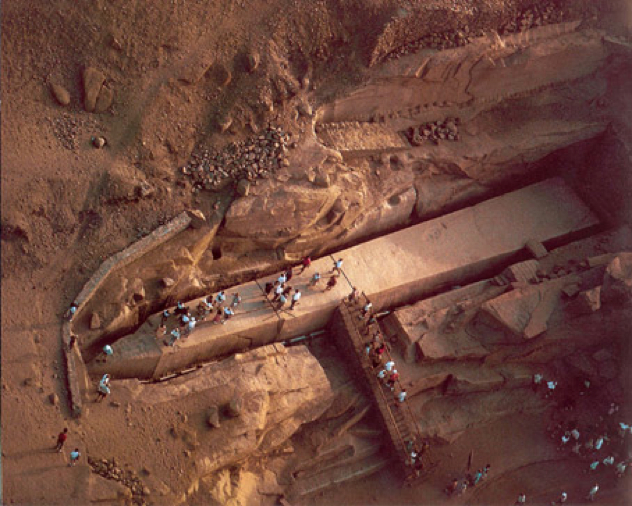 In the ancient quarries near Aswan, Egypt, lies a gigantic piece of stone which was intended to be erected as an obelisk.  The obelisk was never finished, likely due to cracks which formed in the stone during the quarrying (although some believe the builders may have been violently interrupted).

The sheer size of this object is what makes it remarkable. It would have been a full third larger than any other ancient obelisk known to us.  Standing 137 feet (42m) tall and weighing 1200 tons, this single piece of rock would have been taller than a ten-storey building.  There are very few modern cranes that could move such a massive object—so how exactly did the ancient Egyptians plan on transporting and erecting it? 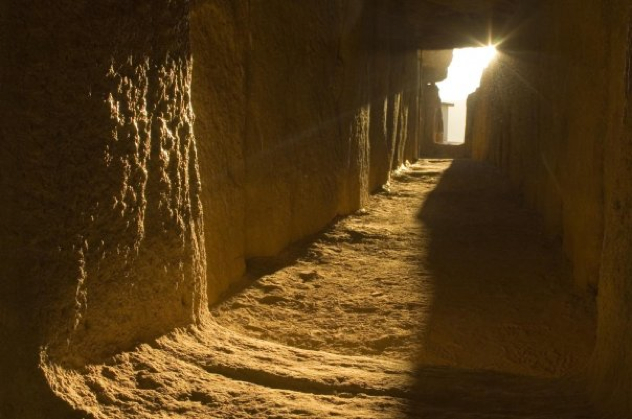 The three most important dolmens (or passage mounds) in Spain—Cueva de Menga, Cueva de Viera, and the Tholos of El Romeral—are some of the largest in the world.  The largest stones used in their construction weigh one hundred and eighty tons, and were transported from at least a mile away.  The sites, which are located near the town of Antequera, are believed to have been established around 3700 B.C.—making them a contemporary of many famous megalithic sites such as Stonehenge.

Many of the walls feature anthropomorphic illustrations.  Menga is aligned with the summer solstice, and El Romeral shares several traits and characteristics with tholos dolmens discovered on Crete, which suggests contact with the Minoan civilization. 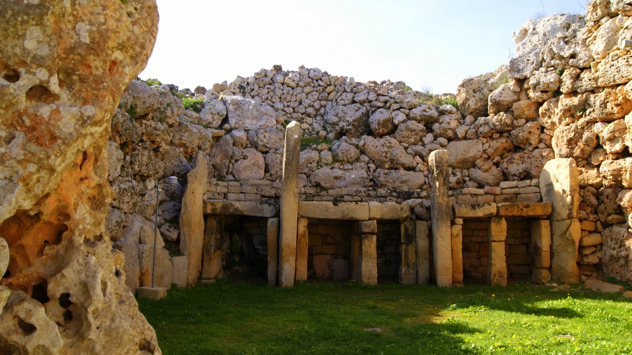 Ggantija is a complex of two megalithic temples on the Maltese island of Gozo.  The stone temples were constructed around 3600 B.C., making them the second-oldest religious structures ever found, just behind Gobekli Tepe.  For a little context, it’s worth remembering that this was a time when metal tools were not available to the natives of the Maltese islands, and the wheel had not yet been invented.

It is believed that Ggantija may have been the site of a fertility cult, as figurines and statuettes associated with fertility have been discovered there.  Small spherical stones have also been discovered, which archeologists believe may have been used as ball bearings in the transport of the massive stone blocks which make up the temples.  All that being said, we still don’t know how or why the temples were built. 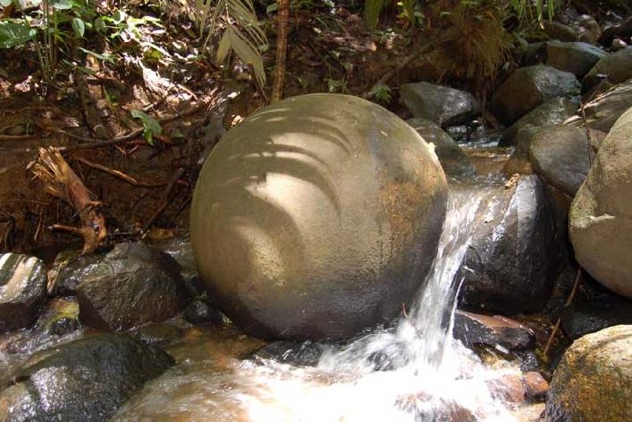 Ranging in size from a few centimeters to more than two meters in diameter, and weighing fifteen tons, a collection of over two hundred stone spheres has been found in Costa Rica. The spheres are believed to have been carved between 1500 and 500 B.C. by a civilization long since disappeared, although exact dating is impossible.

There are numerous myths and legends relating to the spheres, with some claiming that they are relics of Atlantis, and others claiming that the builders possessed a potion which softened rock.  Although the stones have been weathered, damaged, and eroded over the centuries, some believe they were originally carved into perfect spheres. Once again, we still don’t know what purpose was served by these stones. 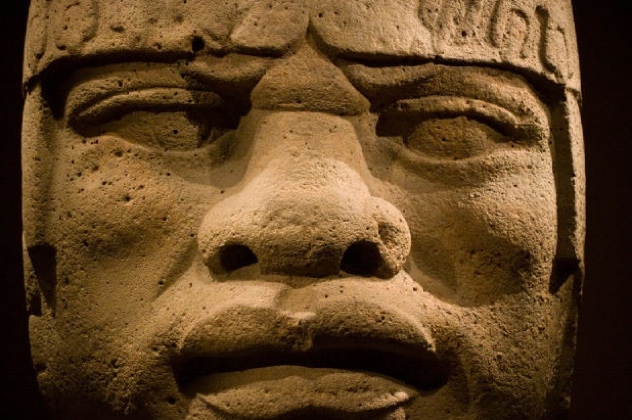 The Olmec heads are a collection of seventeen colossal heads, carved from stone.  The heads date from 1500–1000 B.C., and weigh between six and fifty tons.  Each head is carved with a unique headdress, leading some to believe that they were meant to be representations of powerful Olmec rulers.  Others claim that the face structure featured on the heads resembles that of an African male, suggesting that this might be evidence of an advanced African civilization visiting the Americas in prehistoric times. 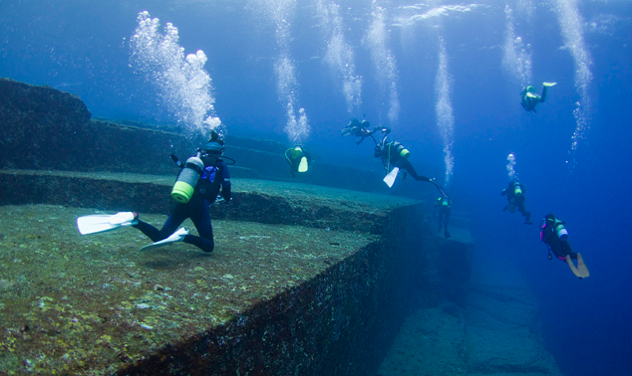 In 1987, a group of strange formations was found underwater off the coast of Yonaguni Island.  These formations feature flat parallel edges, right angles, sharp edges, pillars, and columns—leading many to believe that the site could be man-made.

The last time this area would have been dry land was eight to ten thousand years ago, during the most recent ice age—and so if Yonaguni really was constructed by humans, it would be one of the oldest structures on Earth, and would drastically change what we think we know of prehistory. 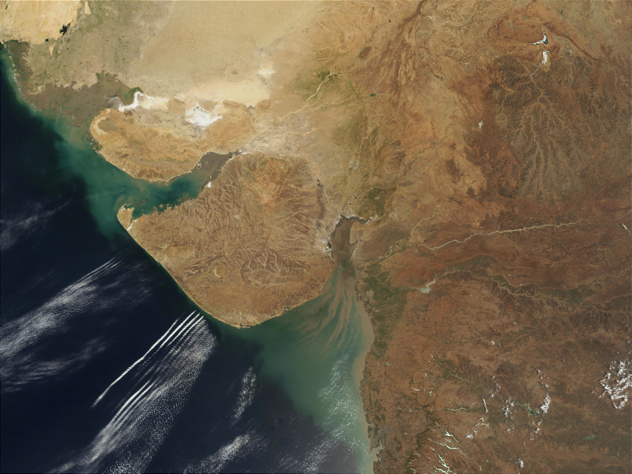 In 2001, evidence of a sunken city was found off the coast of India, in the Gulf of Cambay.  Several manmade structures have been identified using sonar, including large buildings and canals.  Artifacts such as pottery shards and hearth materials have been dredged up from the bottom.

The scale of the city is quite large, especially considering the fact that one piece of wood has been dated from as early as 9500 BC.  If it really existed back then, the city would be thousands of years older than the previous oldest city found in India, and would have existed thousands of years before humans were thought to be building cities of this size.

There are some people who scoff at the suggested date, saying that the carbon-dated wood proves nothing—but all the same, there is enough evidence to make this site one of the most intriguing in the world. 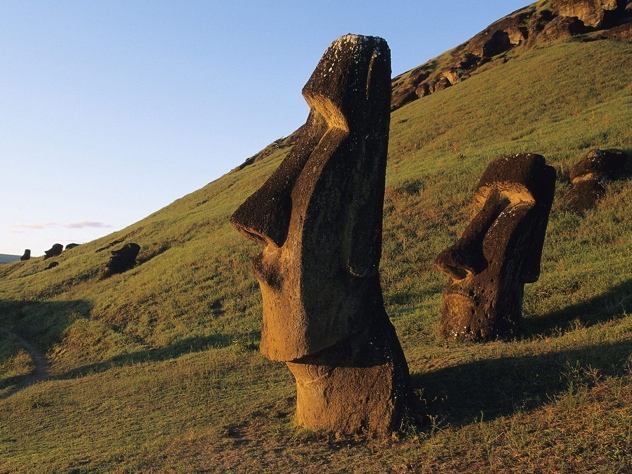 On Easter Island—one of the most remote inhabited islands on Earth—lies one of the world’s most famous mysteries.  The giant stone statues (Moai) of Easter Island are a favorite of tourists—but little is actually known about them.  Although it was thought at first that the statues were merely heads, excavation has shown almost all of them to have bodies.   Very few of the statues were ever actually erected; most were left in quarries, or abandoned during transport.

Archeologists don’t know why the statues were built, what they signified, how they were transported and erected, or why they were abandoned unfinished.  There is a form of hieroglyphic writing on some of the statues, which nobody has been able to translate.  The people of Easter Island themselves are something of a mystery; it remains unclear where they originally came from.

One of the wildest theories about Easter Island has it that the island is actually the peak of an underwater mountain—and all that remains of the lost civilization of Mu. 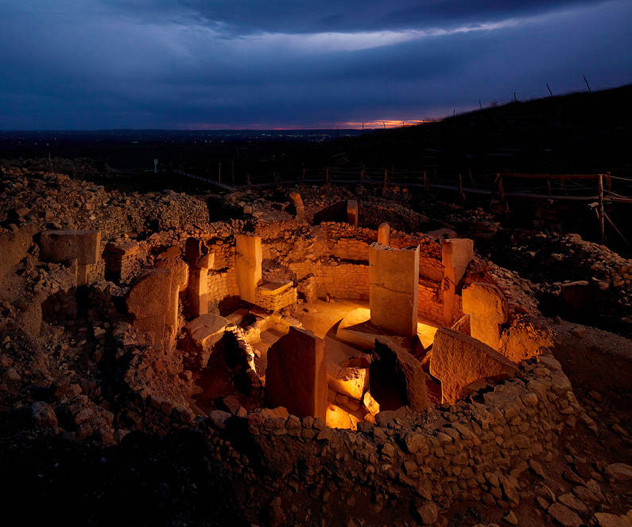 The site contains stone structures and stone pillars which feature carvings of various predatory animals. The stone pillars—some of them reaching nearly twenty tons in weight—date to a time when humans were thought to be simple hunter-gatherers. Gobekli Tepe seems to have been built before the advent of agriculture, religion, written language, the wheel, pottery, the domestication of animals, and the use of anything other than simple stone tools.

How were these structures built at a time when humans are basically thought have been cavemen?  How did they quarry huge pieces of stone, and cut them to size with no metal tools?  What was the purpose of such a site, before religion was thought to have been established?  The discovery and ongoing excavation of Gobekli Tepe could eventually change our conception of prehistory forever.