Kissing is an integral part of many segments of humanity. The act is present in large portions of the globe, with each culture coming up with their own unique twist. For example, the Germans have a word, nachkussen, which is defined as a kiss “making up for kisses that have been omitted.”

Here are ten different customs involving kissing. Some are ancient; some are recent. Some are for luck, while others are a sign of respect. And no one said they had to involve kissing another person. 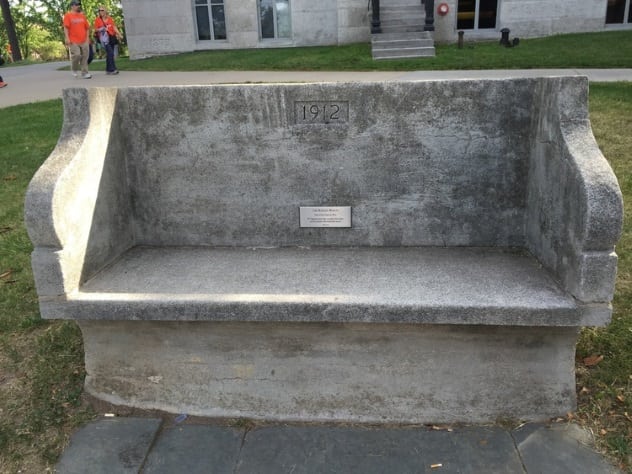 Not unlike many other colleges and universities throughout the world, Syracuse University in Central New York has a number of unique traditions which its students have carried on over the years. Chief among them is a particular landmark known as the Kissing Bench. Commemorated as a memorial by the class of 1912, the departing students planned to start a tradition in which every set of graduates would donate their own memorial. However, what actually came from the bench was completely different. 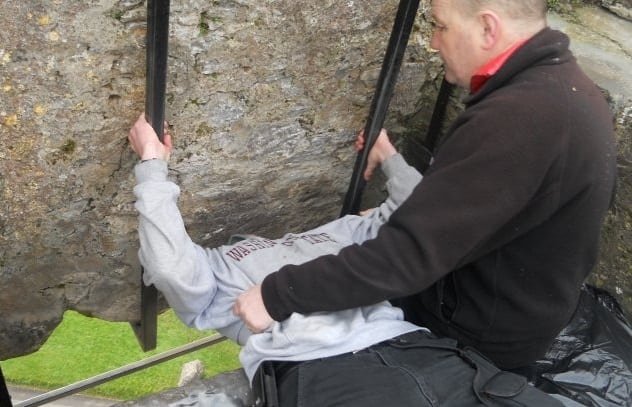 No list on kissing would be complete without what is possibly the most-often kissed inanimate object in history. Wrapped in mystery, its true origins are unknown. Some say it is part of the original Stone of Scone, upon which Scottish kings were coronated; others say it was a gift from Robert the Bruce. (These stories are most likely apocryphal, as recent scientific analysis has shown that the makeup of the stone is unique to the area.)

As far as the origins of the powers granted by the stone go, Cormac MacCarthy, the builder of Ireland’s Blarney Castle, was said to have saved a witch from drowning.[2] Grateful for his actions, the witch revealed to him that kissing the Blarney Stone would endow a person with “the gift of gab,” special skills of communication and flattery. Legends even surround the name of the stone itself, with the most widespread version having Queen Elizabeth I remarking about MacCarthy’s numerous letters as a lot of “blarney,” as they were incredibly eloquent. 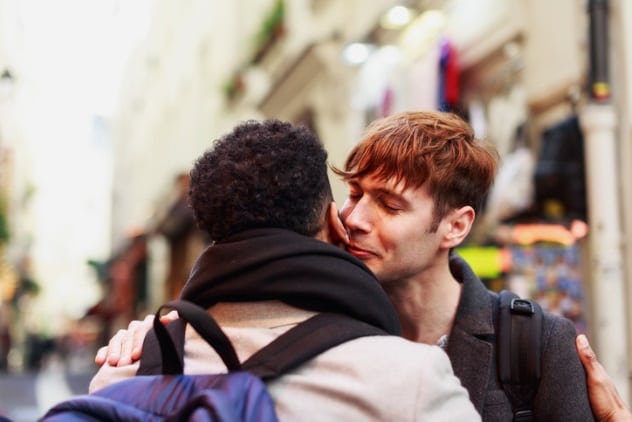 Faire la bise, French for “to give a kiss,” is the traditional way for citizens of France to greet each other. Wrapped up in a number of rules, guidelines which tell someone how many kisses to give, how to kiss, or who to kiss, faire la bise is a complex social interaction. (There is an old joke which says you can tell which part of France you’re in by how many kisses people give when they greet each other.)

Though it is normally just a touching of the cheeks accompanied by a kissing sound, French people familiar with each other will more than likely actually kiss one another on the cheeks. Conversely, strangers will most likely refrain from faire la bise, choosing instead to offer a handshake until they know each other better.[3] Also, if you were to arrive at a party, the socially acceptable thing to do is to kiss everyone, so no one feels offended. The practice is so widespread that when swine flu epidemic fears ravaged the globe, various companies and schools worked to ban the social ritual.

7 The Kissing Of The Bricks 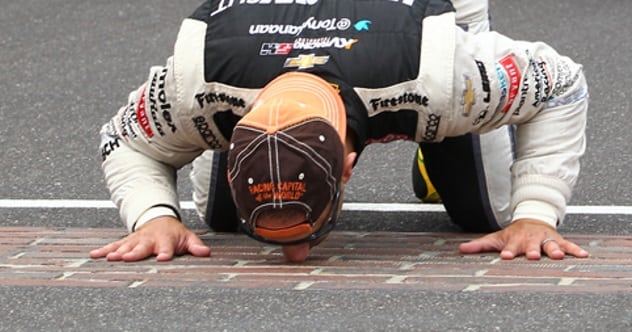 One of a number of sports-related kissing customs, the kissing of the bricks takes place after every NASCAR and Indy race at the Indianapolis Motor Speedway.[4] In 1996, NASCAR’s second year racing at the track, a driver named Dale Jarrett and his crew chief, Todd Parrott, decided they needed a tradition of their own. (Indy 500 winners have always traditionally drunk milk after their victories.)

In the end, the pair decided to kiss the row of bricks which make up the start-finish line of the racetrack, and it has fast become one of the sport’s most celebrated traditions. In the early 20th century, the speedway was made up of over 3.2 million bricks; however, due to wear and safety concerns, including the deaths of five drivers, everything except for that one patch at the start was paved over with asphalt. (It’s also where the nickname “the Brickyard” comes from.) 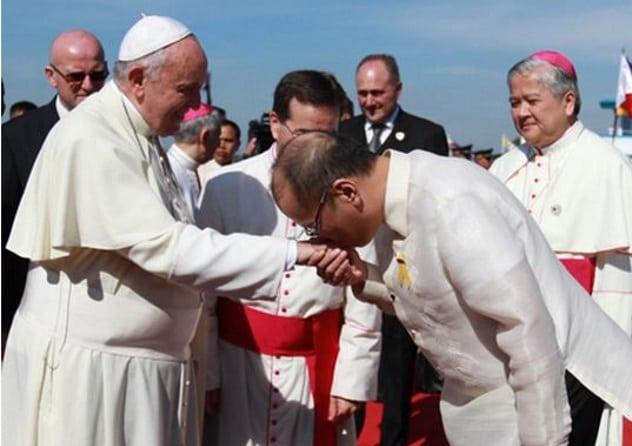 One of the innumerable customs surrounding the head of the Catholic Church, kissing the pope’s ring is steeped in tradition. Seen as a sign of respect for the office, the faithful are said to be acknowledging the fact that the pope is a representative of Jesus Christ on Earth.[5] In addition, many Catholics also kiss the rings of lesser clergy, such as those of cardinals and bishops.

The pope’s ring itself is known as the Ring of the Fisherman and has been in use since at least the middle of the 13th century. Made of gold, the ring has a depiction of St. Peter, who the rule of the pope is said to be descended from, in a boat, fishing. However, some Catholics refuse to perform the practice, most notably and recently Joe Biden, as they see it as an attack on their personal dignity. Proponents of kissing the ring say it is no different from when the British rise when the queen enters a room. 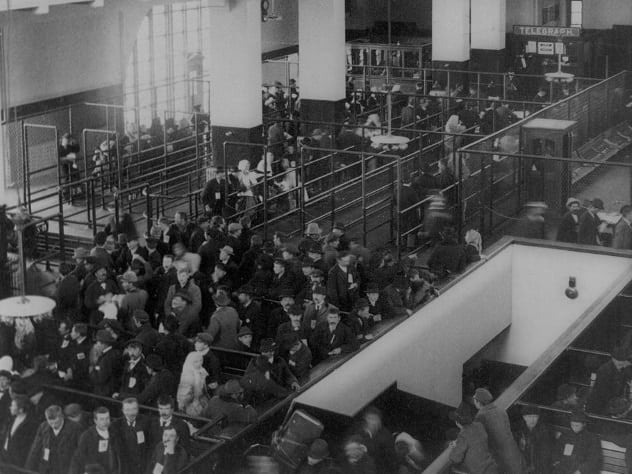 On Ellis Island, the busiest immigration gateway into the United States from 1892 until 1954, sits an otherwise nondescript column. Nicknamed “The Kissing Post,” it was situated in the first area in which new immigrants would be reunited with their families. It sat behind a partition, as friends and relatives of the immigrants had to wait for them to be cleared.[6] Once they were cleared, the friends and relatives were brought in, though the two groups never saw each other.

When everyone had finally been cleared, they were allowed to join one another, a process which usually took place at the Kissing Post. Customs officials bestowed the name on the column because of the number of kisses they witnessed at that place. Eventually, the post itself came to symbolize freedom and the reunion of love. 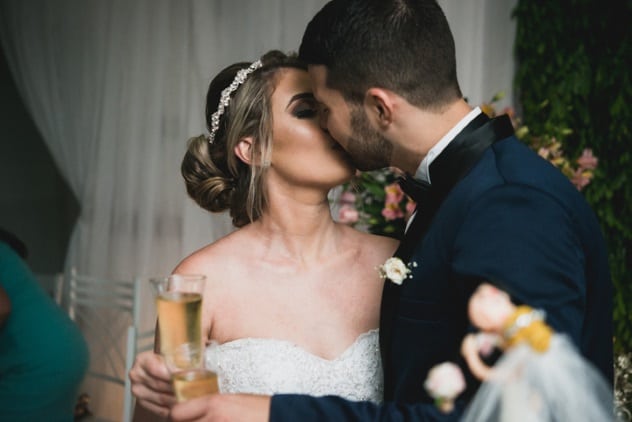 Nearly every culture has a tradition of kissing between the bride and groom at their wedding, an act first started by the ancient Romans. However, many societies have put their own unique spin on it. Take Sweden, for example: After the ceremony, if either the bride or groom leaves their new spouse, any member of the wedding party (of the opposite sex) is free to plant a kiss on the one left behind.[7]

Kissing at the wedding also ties in to the origins of tiered wedding cakes. In medieval England, small cakes were brought to the wedding by guests, who stacked them in a pile, as high as they could. The idea was if the bride and groom could kiss over the top of the pile, they would have a lifetime of prosperity. In the 1660s, a visiting French chef conceived the idea of a multi-tiered cake after being appalled at the haphazard way the British went about it.

3 Full Moon On The Quad 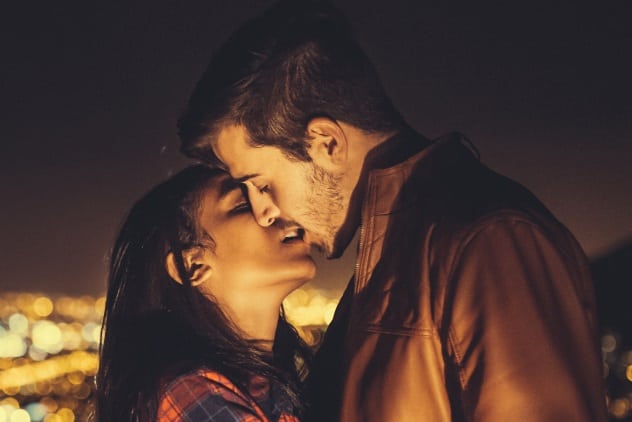 Though they have tried to outlaw it before, school officials begrudgingly endorse the practice. The most common complaint: That many people kissing each other increases the risk of a number of different diseases, including meningococcal meningitis, also known as “freshman meningitis.” There are even “peer health educators” who spend the days before the night educating students on what to look for in a kissing partner and how to kiss safely. 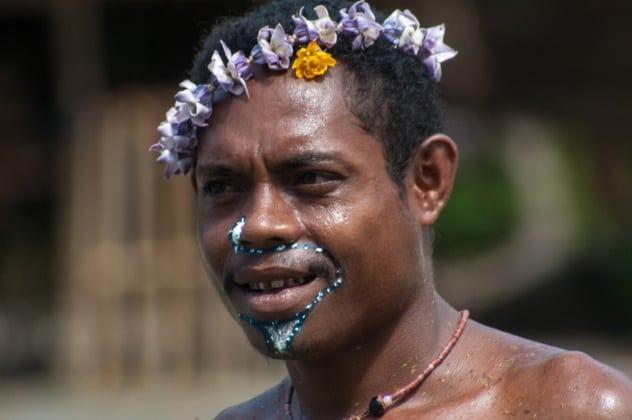 A relatively small archipelago just off the eastern coast of New Guinea, the Trobriand Islands are home to an indigenous population with a rather odd way of kissing. It starts off simple enough: The two kissers sit in a squatting position, hugging and caressing one another.[9] Next, they suck on each other’s tongues, rubbing them together as well. Then it gets weird: They start to bite each other’s lower lips, often so strongly that they draw blood.

The final step in a Trobriand Islands kiss is to bite off the eyelashes of your partner (although this is considered highly intimate and usually reserved for the privacy of lovemaking). In fact, it is seen as a status symbol, a reflection of one’s popularity, to have shortened eyelashes or none at all. 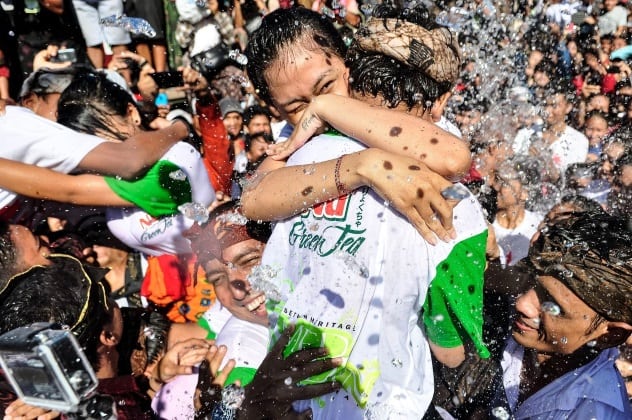 In Sesetan, a village on the island of Bali, a kissing festival known as Omed-Omedan is held every year. Believed to ward off bad luck in the upcoming year, the festival is held the day after Nyepi, a day of silence for Balinese Hindus which marks the Saka New Year.[10] Teenagers will gather along the main road and say a brief prayer before the action starts. Kissing and dancing soon commences, with onlookers spraying the teenagers with water.

The details of the legend surrounding the origins of the festival are murky at best, as it is described as beginning “a long time ago.” It’s said that a group of teenagers, bored out of their minds on Nyepi, were playing near a sick elderly man’s house. He yelled at them and instantly felt better. The festival was eventually moved to the following day out of respect for the older tradition.

Read more about kissing on 10 Curious Facts About Kissing and 10 Memorable Kisses Through History.