Survival in nature is largely a matter of eating and simultaneously trying not to be eaten or attacked by rivals. The struggle is further compounded by the imperative to dazzle the opposite sex and care for young. Many animals work an “honest” living through their size, strength, and hunting prowess. However, a selection of animals have chosen deception, treachery, and downright fraud to either resemble dangerous animals for protection (defensive mimicry), or pass as a literal wolf in sheep’s clothing to get within striking distance of prey (aggressive mimicry). Either way, they’re masters of deception. 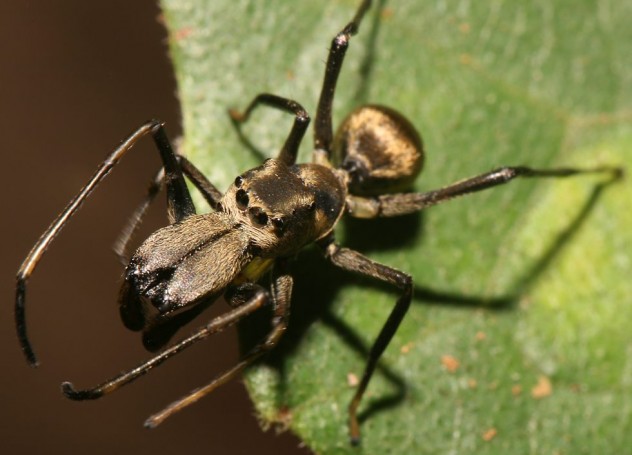 With aggressive mimicry, capturing other insects becomes easier for certain ant-mimicking spiders, which bear an absolutely stunning resemblance to bona fide ants. In a remarkable display of evolutionary copycatting, certain ant-mimicking spiders not only have the body form of an ant, but align their extra pair of legs to look like the antennae of a six-legged insect. Passing for a relatively non-threatening ant allows them to get within easy striking distance of their prey. In an opposite twist, many more species of spiders mimic ants in order to obtain protection against predators, who have no interest in messing with what they think is a very unappealing ant. Ants may be drab but they are still aggressive and the highly distasteful cousins of bees and wasps. 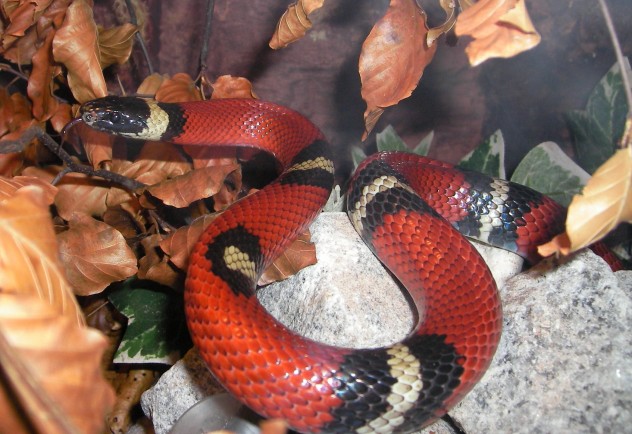 Venomous snakes do not only possess venom to subdue and terminate their prey, but must bite in self-defense when targeted by their surprisingly numerous natural enemies. However, this could come too late, after fatal injuries are inflicted by the predator. As a result, certain venomous snakes have developed striking “warning colors” to scare off predators in advance. The many species of coral snakes measure around one meter (3.3 ft) and possess brilliant red bands set on yellow stripes. Their venom is capable of neutralizing many potential threats, including humans. In a rather dramatic copycat act, the harmless milk snake has taken on a nearly identical palette of warning colors. However, the arrangement of the color pattern differs and can be identified with the mnemonic, “Red on black, you’re a lucky jack; red on yellow, kill a fellow.” 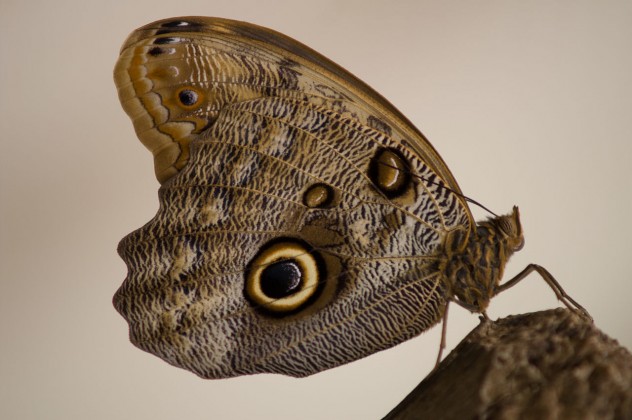 With soft, powder-covered bodies, butterflies are among the most defenseless animal species on the planet when it comes down to life or death physical conflicts. In a very wise evolutionary move, the owl butterflies have devised a spectacular means of robbing potential predators of their appetite. These rain forest dwellers of the New World tropics measure around 20 centimeters (7.9 in) across, and face threats from a variety of tropical birds. The butterflies are a drab brown color, with two extremely prominent, multicolored spots on their lower wings that resemble the eyes of an owl. The shape of the wings coupled with the size of the butterfly create the appearance of an owl’s face that could even fool a human, and definitely does fool the insect-eating birds that pose a threat. 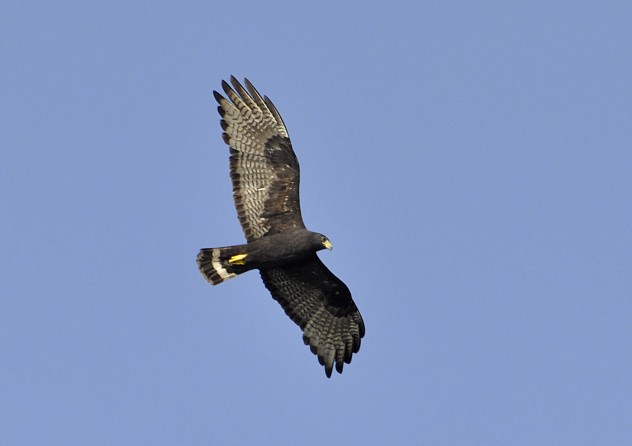 Vultures may serve as universal symbols of death, but their lifestyle as insatiable scavengers causes prey animals to quickly lose respect for these slightly aberrant meat-eating birds. They fall into two categories: Old World vultures are related to raptors, while New World vultures may share a relationship with storks. Conversely, hawks and eagles elicit an immediate flight response from many of their prey items that instantly recognize the deadly threat the birds pose. Zone-tailed hawks have evolved traits including a lengthened tail, dihedral forming wings, black plumage and a distinctive wobble in their flight that causes them to resemble a harmless turkey vulture. Many ornithologists believe these traits are a form of aggressive mimicry intended to bring them close to their prey without triggering flight. Zone-tailed hawks fly incognito over a range of habitats in both North and South America. 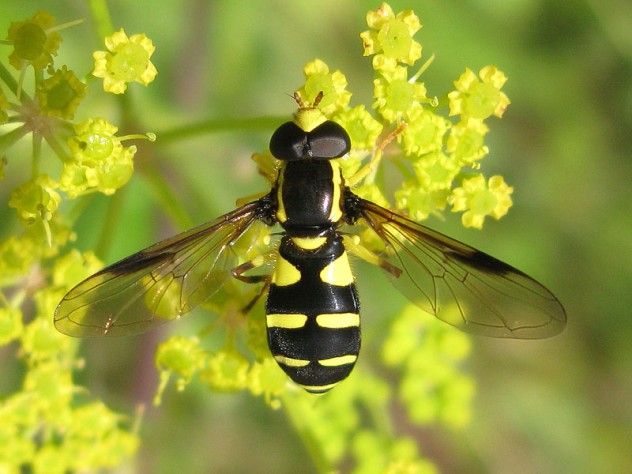 Many of the most dangerous animals in nature are not really out to get you. In fact, they advertise just how dangerous they are with a range of brilliant warning colors, such as the yellow stripes on the wasp. And there are several thousand species of hoverfly that take advantage of the wasp’s reputation. Possessing few defenses, the majority of hoverflies are also primarily yellow with black stripes. To the average human observer, and likely the majority of predators, the hoverfly passes for a venomous bee or wasp in a form of deception known as Batesian mimicry. This form of “crying wolf” presents the risk of the animal’s cover being blown should certain predators begin to hunt them without suffering ill results. Closely related to the unpopular housefly and horsefly, hoverflies are beneficial and clean insects, feeding on pollen, nectar, and even aphids. 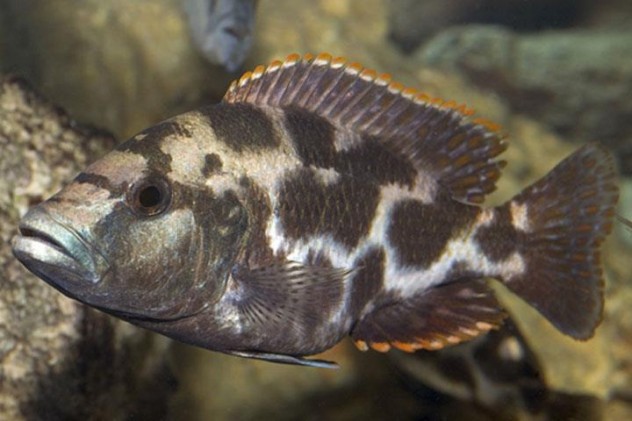 Perciformes, the perch and its relatives, form the largest order of bony fish, many of them serving as top predators in their habitat. Included among this diverse and successful group are master impostors that have adeptly refined the art of aggressive mimicry. In an exceptionally strange and rather morbid feat of deception, the Nimbochromis cichlids of East Africa’s Lake Malawi feign death by lying limply on their sides on the lake bottom. When a curious scavenging fish approaches, the fishy corpse suddenly “resurrects” into a truly lethal predator, bursting forth at lightning speed and seizing and consuming the curious investigator. The strange fish are often nicknamed “sleepers” due to their rather creepy hunting habits.

Most animals use defensive mimicry to avoid being eaten, but for parasites, being caught and ingested by a host is precisely the point. Flatworms of the genus Leucochloridium in North America and Europe infest certain land snails after exposure through bird droppings and swell up into the snail’s eyestalks, where they mimic tasty insects such as caterpillars or maggots and generally turn the snail’s face into a theatrical production (watch the video; you won’t be disappointed). Songbirds like chats and robins are attracted by the waving motions and attack the snail to eat the infected eyestalks. (The snails often survive the attack, and regenerate new eyestalks, which become re-infected.) The bird will then carry the worm and pass parasite eggs in its droppings, perpetuating the cycle as those droppings are visited by other snails.

Build for The Kill – Leaf Fish

While many predators mimic a harmless living animal to deceive their prey, South America’s freshwater leaf fish doesn’t even do that: they just act like the environment. Hanging limply in the water, leaf fish appear to human observers and potential prey to be just another dead leaf floating in the turbid waters. When a fish drifts by, the lazily floating “leaf” suddenly lunges at lightning speed, seizing its prey in a deadly grasp. Leaf fish measure out at around 10 centimeters (3.9 in) in length, and inhabit a range of waterways. In addition to their bursts of speed, leaf fish possess disproportionately large jaws that allow them to take on much larger prey items than their size indicates. 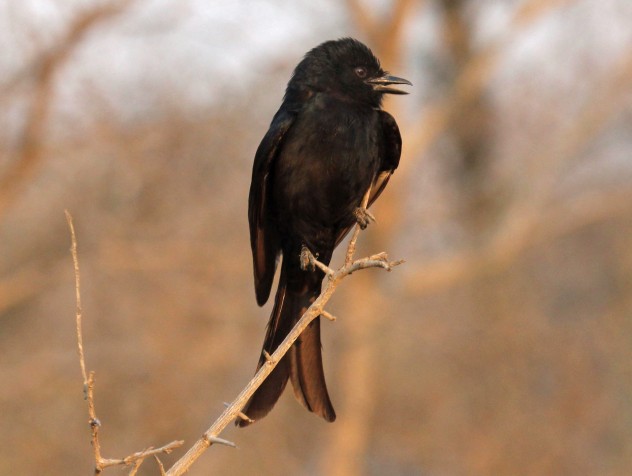 While environmental pressures have caused many species to pursue strategies of defensive or aggressive mimicry to capture prey or avoid being eaten, food theft (or klepto-parasitism) is a surprisingly frequent vocation among certain animals. While a wide selection of powerful birds simply intimidate their adversaries, emerging research indicates that a small, fairly weak African songbird known as the fork-tailed drongo tricks meerkats into abandoning their prey by feigning meerkat alarm calls. The drongo will then help itself to the abandoned meal. Meerkats are closely related to weasels, a mammal often touted as being extremely cunning. Drongos take deception to an entirely new level, and prove that a message “told by a little bird” is not always one to be trusted.

In a fascinating example of a symbiotic relationship, cleaner wrasses approach larger fish and offer their parasite and dead skin removal services in exchange for a meal. A “dance” coupled with a display of unique colors notifies the recipient, often a predator of small fish, that these individuals are service crew and not food. The dance also cues the recipient to adopt positions favorable to cleaning treatment, including flared gill covers. In a bizarre twist of mimicry, the ferocious sabre-tooth blenny takes advantage of this unique trust by mimicking the wrasse in shape, markings, and behavior. Getting close to a larger fish, the blenny then approach normally. But instead of gently removing a parasite, the blenny snatches a large bite out of the fish’s flesh and escapes. Such duplicitous and vicious attacks cause the “clients” to become much more cautious, to the detriment of the legitimate aquatic sanitation workers.

Ron Harlan investigates the mysteries of nature and the bizarre findings that often crop up on this planet. He is a freelance writer and student of science.