While we all like to believe we have the fortitude to stand by our own convictions during any situation, most of us tend to follow the behaviors of others. But what’s particularly strange is that when enough of us get together, we end up doing some really bizarre, nonsensical, and downright violent things that we’d never consider on our own. Psychologists refer to this phenomenon as herd or mob mentality, and when you consider the past and present, you realize it’s led to some major “What were they thinking?!” moments. 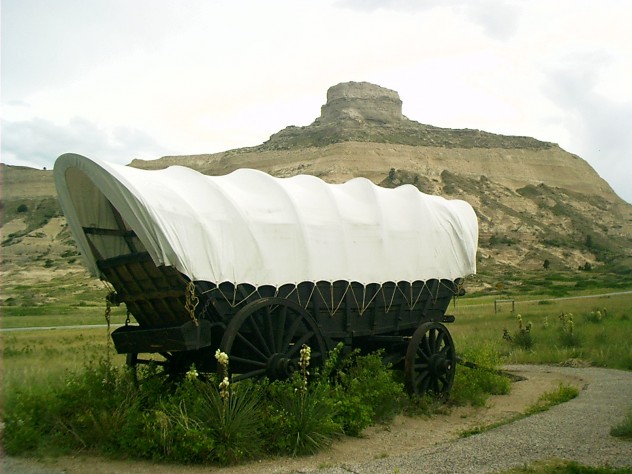 It all started in 1857. Utah Mormons discovered a wagon train of families on their way to California. For whatever reason, the church members felt threatened by these passersby and unleashed an attack. Not wanting to take blame for the assault, they disguised themselves as Native Americans, à la the Boston Tea Party, and enlisted the help of some Paiute “Indians.” The emigrants defended themselves for five days—until the “Mormon Militia” approached them with white flags signaling a truce. Low on water and provisions, they gladly accepted the truce and agreed to be escorted into Mormon protection. However, as soon as they left their fortifications, they were murdered and buried in shallow graves.

Initially, Mormon leaders denied any involvement in the massacre and placed all blame on the Paiute. Later, they admitted the Mormon Militia’s participation but claimed the militia acted on its own accord and not under direction from Brigham Young (the church’s prophet and president at the time). Today, the church maintains a monument in the meadow to honor those who were murdered. 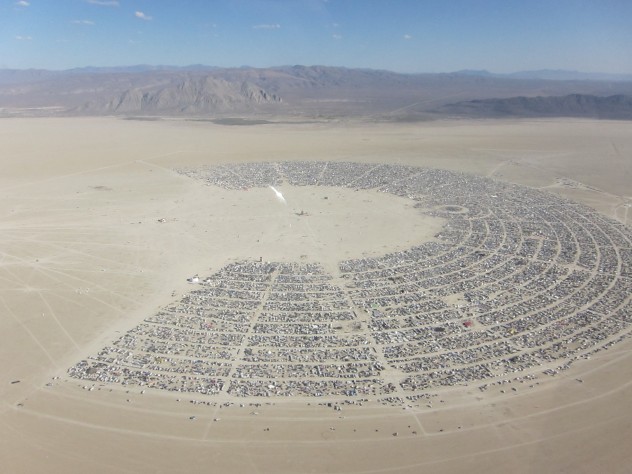 Mob mentality doesn’t always lead to violence. Take the Burning Man festival, for example. It began in 1986 as a small gathering of friends on a San Francisco beach and has evolved into a weeklong event attended by 50,000 people—now in Nevada’s Black Rock Desert. It’s described as an experimental society and a “temporary metropolis dedicated to community, art, self-expression, and self-reliance.” There are only a handful of rules, and most involve maintenance and environmental things, such as where to park and proper outhouse usage.

Naturally, all that freedom means attendees lose their inhibitions, and it only takes a few to strip down before the whole crowd is in their birthday suits. Basically, there’s a lot of pressure to join the herd. Just think about it: would you want to be the one person fully clothed while 49,999 others are dancing nude around the fire? Probably not.

8 The French Revolution’s Reign of Terror 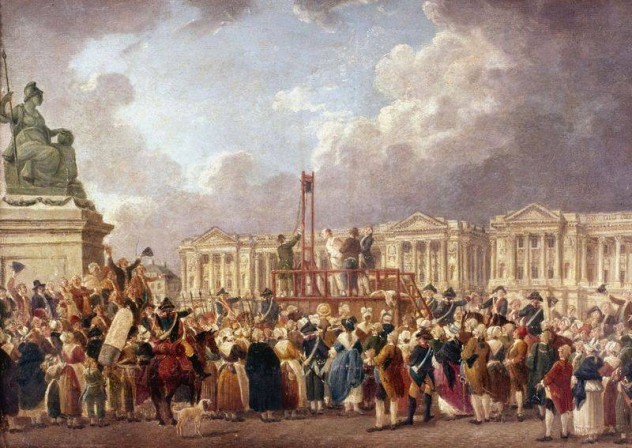 Give the downtrodden a shiny, head-removing device (the guillotine), work them into a frenzy about social injustice, and you have a recipe for around 50,000 executions. Still, a steady stream of beheadings didn’t satisfy the bloodlust of these revolutionaries. They unleashed all sorts of terror: public beatings, firing squads, weighting victims and tossing them from boats, parading severed heads through the streets, and more. Aristocrats weren’t the only victims here; virtually anyone suspected of counterrevolutionary thoughts was fair game. And trials (when they occurred) were generally a farce.

It took almost a year for the people to realize their revolutionary leader had turned into a murderous fanatic. In true mob fashion, they solved the problem with one last beheading. 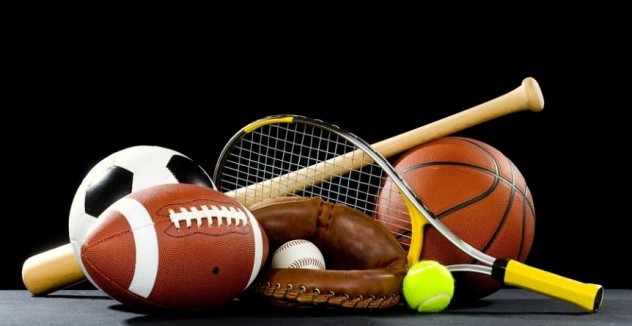 Arguably, every large sporting event is an example of herd mentality. Where else do beer-bellied men deem it okay to stand half-naked with their faces and torsos covered in paint? Most sports fans wouldn’t do these things on their own, yet once they’re in the crowd, they take on the collective moods and actions of the group. Add alcohol to the equation, and anything can happen.

Storming the field and tearing down the goalposts after football games is a common enough occurrence, but frantic spectators have done far worse. Take the 2011 Stanley Cup championship, for instance. The Vancouver Canucks were beaten by the Boston Bruins, and the disappointed fans wrought havoc on Vancouver. They turned over cars, lit fires, threw garbage at police, smashed glass storefronts, and looted businesses.

More recently, Egypt sentenced 21 soccer fans to death after they incited a stadium riot that killed 74 people and injured 1,000. Many died from trampling and from falling from stadium balconies. Unfortunately, the verdict sparked another riot, which left at least 30 dead and over 400 injured. 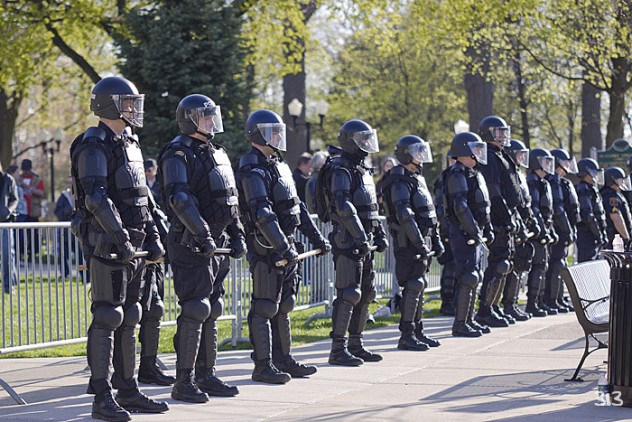 While most think of Woodstock as the epitome of free love and revelry among America’s youth, college-age students were defying the “man” and being decidedly more destructive a few months earlier at the May, 1969 Zip to Zap spring break celebration/riot.

It all started with Chuck Stroup, a North Dakota State University student who was bummed that he couldn’t attend the spring break festivities in Fort Lauderdale, Florida. Instead of missing out on the fun, he decided to throw his own event in the small town of Zap, North Dakota. Thanks to student newspapers across the country and publicity from the town’s government, word spread like wildfire, and nearly 3,000 booze-starved college students descended on Zap and its 250 residents. 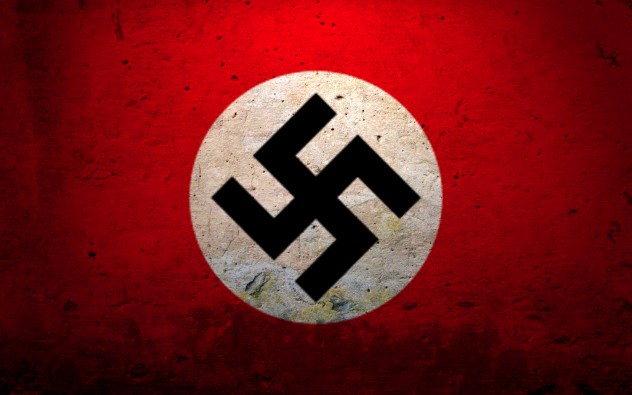 Looking back on Nazi Germany, it’s difficult to comprehend how ordinary people acted so ruthless and inhumane. Even if you assume the average German citizen didn’t know what was happening in the concentration camps, there were still 24,000 members in the “Death’s Head Unit,” a special section of the Schutzstaffel (SS) that was in charge of the concentration camps. These Death’s Head members undoubtedly knew what was happening. Even hatred and extreme anti-Semitism aren’t enough to motivate the average person to commit murder, but put that person in a group of other like-minded individuals with leaders pushing for brutality, and voilà: mob mentality ensues.

Those 24,000 SS members (and likely many more) lost themselves and became part of a killing machine. During the Nuremberg trials, former Nazi officials justified their participation in the atrocities by saying they were simply “following orders.” 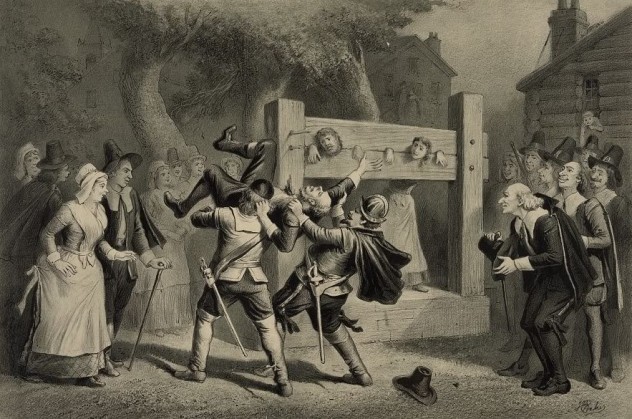 The 1692 Salem Witch Trials are everyone’s favorite example of mob mentality, and although the incident has been discussed to death, it’s worth mentioning. It truly epitomizes what can happen when religious extremism and mobs collide. In fact, this incident made such an impression that—over 320 years later—we still use the phrase “witch hunt” to describe people being senselessly persecuted.

No doubt you’ve heard the story: a couple of girls started acting weird (having fits, diving under furniture, contorting in pain, etc.) and claimed witches were responsible for their “sickness.” They pointed fingers at specific women in Salem, and after the doctor confirmed the girls were possessed, the already witch-phobic town went berserk. Salem officials started arresting suspected witches based on the flimsiest evidence (accusations from little girls), and the town went along with the whole thing, relishing in the witches’ destruction.

Perhaps the most bizarre part was the inane methods they used to judge the guilt of the suspects. Basically, if they wanted you to be guilty, they could take anything on your body or in your home and twist into something “witchy.” Have a mole or blemish? Actually, that’s a “witch’s teat.” You’re a witch. Keep a bottle of ointment in your house? Well, that’s witch contraband.

Altogether, they imprisoned 150 people and killed 25; 19 were hanged, one man who refused to enter a plea was crushed under heavy stones, and five died in prison. 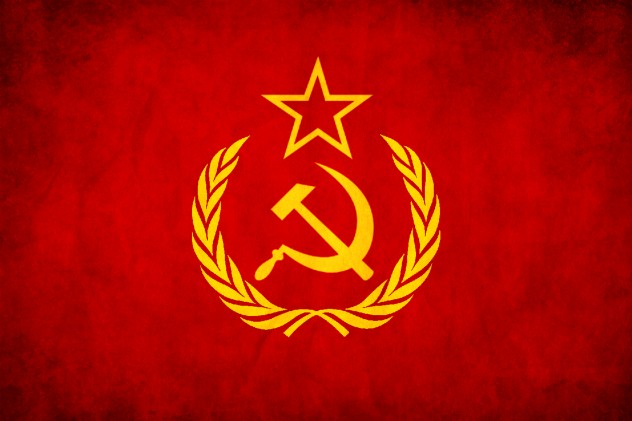 The Second Red Scare, which occured between 1947 and 1957, was a modern-day “witch hunt.” But this time, the people were hunting communists. Thanks to the paranoid ramblings of Senator Joseph McCarthy and others, folks in the US thought communists were hiding everywhere—infiltrating the government and all aspects of society.

Strangely enough, the few “wolf criers” in the government were able to evoke so much fear in the citizens that most saw no problem with the government’s actions. It only took someone demonstrating liberal tendencies (not even outright Communism) for the “House Committee on Un-American Activities” or McCarthy’s “Permanent Subcommittee on Investigations” to decide it was okay to throw the Fourth Amendment out the window. They broke into homes, looked through private mail, bugged offices, tapped telephones, and more—all without probable cause or a warrant. And the people, President, and Supreme Court were all cool with it. 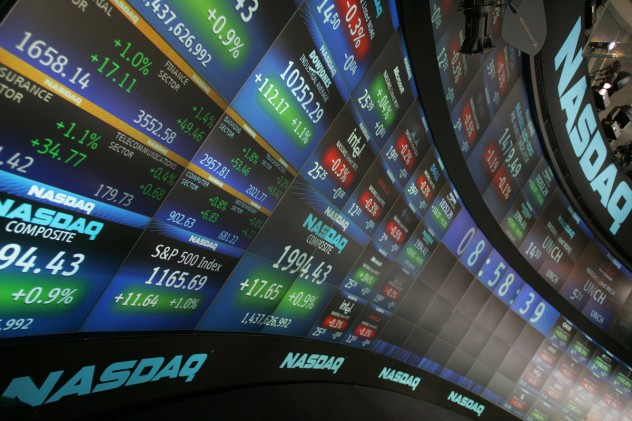 Your economics professor might have told you that stocks rise and fall based on supply and demand. In reality, it all comes down to emotion: namely uncertainty and fear. In other words, when folks feel like the economy is hunky-dory, stocks go up, and when people see or hear rumors about economic problems, it goes down. In essence, it’s a self-fulfilling prophecy.

As Daniel J. Howard, a marketing professor at Southern Methodist University, so aptly put it, “Stock market bubbles and crashes are caused by herd mentality. It’s scary to me because we make our own heaven, and we make our own hell.”

Making matters worse for the herd, they’re always looking for cues from “experts” to know when it’s safe to buy or invest. But by the time the masses catch on, most of the riches are already taken. The herd remains in a perpetual state of vulnerability, always trying to get to the top and letting the moods of others cloud their judgment. 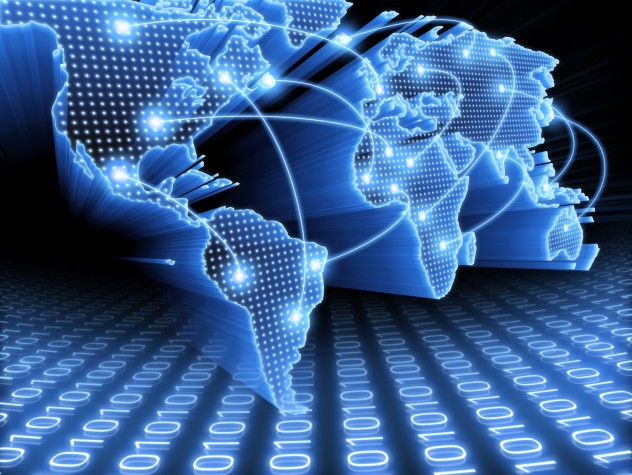 The Internet is a breeding ground for herd mentality. Not only is it easy for online users to find throngs of other individuals who share their brand of crazy, but it shields everyone under a cloak of anonymity, which gives people the freedom to let go of their social restraints.

Roaming virtual gangs harass others in Internet forums while picking up supporters along the way. It leads to rude, sexist, racist, homophobic, and threatening comments that the harassers would never say in “real life.” Of course, cyber-bullying has real world consequences, and there are several cases where it has pushed some towards suicide.

On the plus side, the Internet mob mentality occasionally works for good, such as when the proposed SOPA act threatened to limit free speech and create unnecessary censorship on the Internet. Everyone—from Google to bloggers—was participating in blackouts. The extreme backlash showed lawmakers there was no way the people would stand for such an act, and thus the mob prevailed.