More than 30,000 species we can roughly describe as “fish” have been discovered, and some have evolved along such weird lines that it’s almost hard to believe they’re related at all. There are strange and mysterious things in the deep places of the world.

Inhabiting deep subterranean environments in Thailand, Cryptotora thamicola is a troglobite and has lost all traces of eyes and pigmentation in its pitch-black home. What makes this particular cave fish especially unique, however, is its preference for fast-moving currents and even vertical surfaces. The rough, clingy undersides of its four large fins allow it to tightly grip smooth rocks without getting swept away and even allow it to climb the rocky walls behind waterfalls.

This deep-sea weirdo is one of the few known examples of a stationary, suspension-feeding fish—meaning that like corals, sponges, anemones, and many other sea creatures, it simply stands in place waiting for plankton to drift into its grasp. Three of its fins extend into long, thin poles, allowing it to prop itself up in the muck of the abyssal floor and remain there for days at a time. It moves only when necessary and uses its two front fins to help catch bits of food and sweep them into its mouth.

Since they don’t need to chase their food, tripod fish are very nearly blind, and since they may not encounter one another very often, they’re simultaneous hermaphrodites—meaning any chance encounter between two adults can impregnate them both.

The Uranoscopidae, or “stargazers,” are a group of stealth predators whose upturned, pug-like faces allow them to hide almost their entire bulk under sand or mud until another tasty fish wanders too close. Popping open its jaws, the stargazer turns itself into a killer sinkhole, capable of swallowing fish almost its own size.

Some species of stargazer are even capable of luring prey with a long, worm-like tongue. Others possess a pair of highly venomous spurs just behind the head, and many also boast an electrical organ between the eyes, capable of paralyzing small prey and delivering a painful shock to the unwary human wader. It’s like a grab bag of fish powers, all rolled into one meat-eating, underwater bear trap. 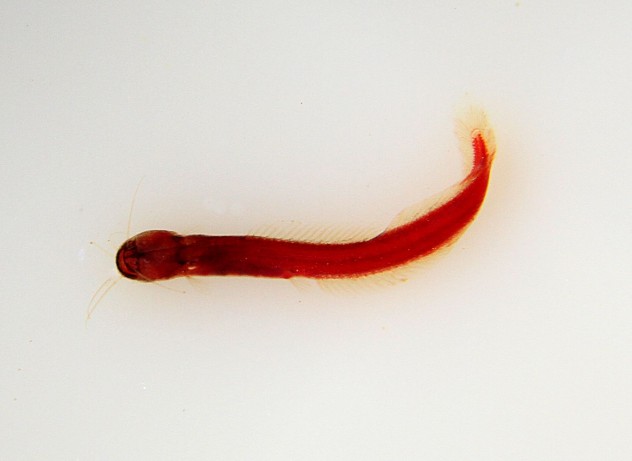 The rarely seen and poorly studied order Phreatobius are said to be the only fish that live exclusively out of the water, slithering around in wet leaf litter along the banks of streams. Pink, slimy, worm-like and seemingly blind, it’s possible that these creatures spend most of their time deep beneath the soil. Everything else about them is completely unknown.

The Pleuronectiformes or “flatfish” are already some of the world’s oddest vertebrates. Though they are born relatively ordinary, their skulls gradually deform as they mature until both eyeballs are on the same side of the body, allowing the animal to lie flat on one side and camouflage itself like a carnivorous bathroom rug.

The tonguewhales, also called tonguefish or tongue soles, are even further specialized, having totally lost their pectoral fins and evolved a smooth, teardrop body shape. In many species, an elongated lip or snout wraps around the front of the jaws, giving the mouth the appearance of a toothed hole clear through their two-dimensional bodies. This odd arrangement assists them in trapping small, soft-bodied prey on all sides at once. 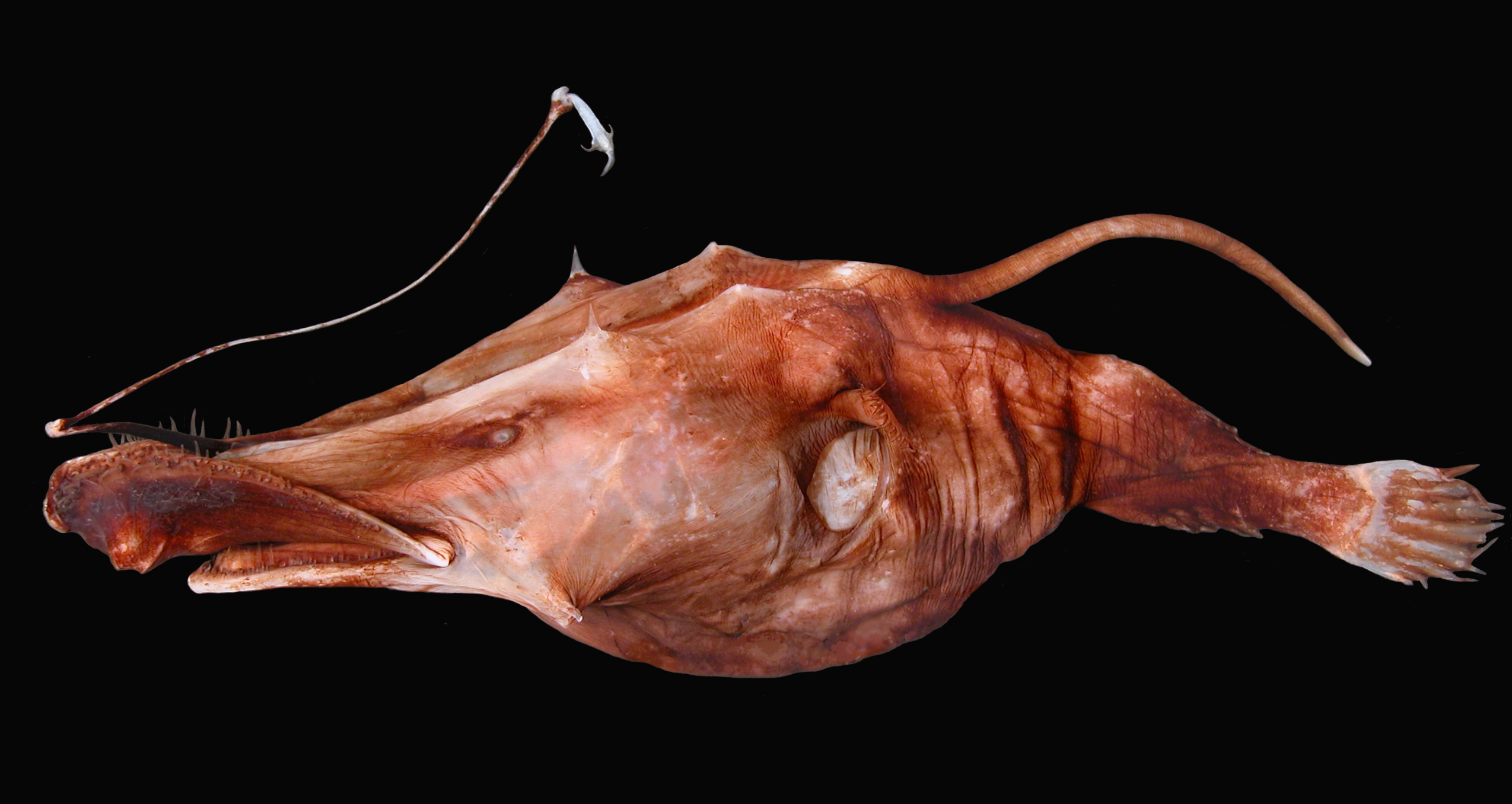 The Thaumatichthyidae, or wolftrap anglerfish, may boast the most absurd overbites in the animal kingdom. Though the upper jaw is often several times larger than the lower one, it is also capable of folding in half lengthwise, forming a cage for the wolftrap fish’s prey and allowing it to suck a meal down its throat. In every member of Thaumatichthyidae, a bioluminescent lure even dangles directly from the roof of the mouth.

Like other deep-sea anglerfish, they have a parasitic mating ritual: the male fuses himself to the female’s flesh before shedding every extraneous body part.

We’ve looked at one rare and obscure fish that slithers about on land, but the most famous amphibious fish is the mudskipper. Mudskippers are a kind of goby that spend more time crawling about on muddy shores than they do submerged—they can even move faster on land than they can swim. Their large gill chambers are capable of holding a supply of water for extended periods of time, and as long as they keep moist, they can also breathe directly through their thin skin.

Male mudskippers are highly territorial, and battle one another for dominance in ridiculous displays of flailing and chomping. 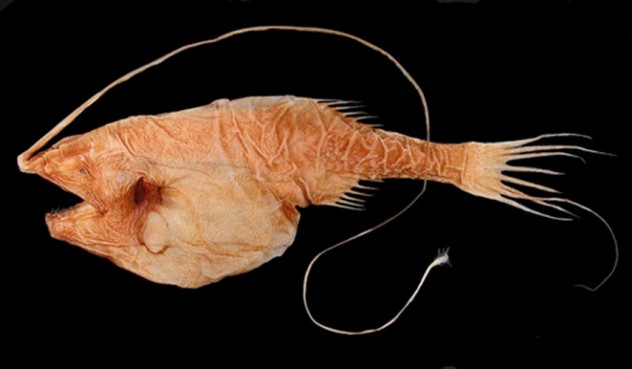 We already know how strange the deep-sea anglerfish can get, but members of the Gigantactinidae, or whipnose seadevils, stand out in two perplexing ways. First, their natural fishing lures grow to extraordinary lengths, sometimes more than 10 times that of the animal’s entire body. Stranger still, all living examples of these creatures have been observed swimming upside-down. Why? No one knows.

Resembling the offspring of a toad and a chicken carcass, members of the Ogcocephalidae family are so adapted to the seafloor that their fins are structured more like legs, allowing them to walk through the sand in pursuit of bottom-dwelling prey. Yet another group related to the anglerfish, they often have a retractable lure just above the mouth, sometimes situated in a nose-like protrusion. 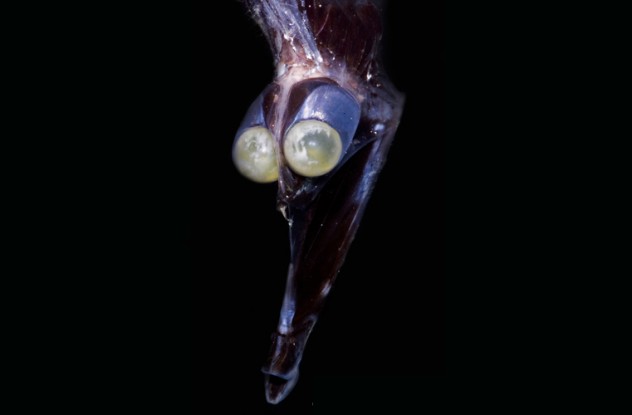 Also known as a thread-tail, Stylephorus chordatus is a rare deep-sea fish so unusual, the single species is alone in an entire taxonomic order. To put this in perspective, all the world’s cats, dogs, bears, raccoons, ferrets, and their relatives belong to one order, the Carnivora. Imagine if none of those existed except for one rare species of weasel in all the world, and you have a situation much like the tube-eye’s.

Despite its names, the strangest thing about this animal is probably its mouth. Except for one tiny, tubular opening, its jaws are fused together by an expandable bag of skin, functioning exactly like a set of bellows, or an accordian. By expanding the bag, it creates a powerful suction through that tiny, tubular opening to slurp up minute, planktonic crustaceans. This same maneuver also bugs out its eyeballs and twists them forward, like a set of binoculars, focusing in on its incredibly small prey.

Jonathan Wojcik writes more about the weird world of biology on his own site, bogleech.com