Turtles are one of the oldest reptiles, coming into existence around 220 million years ago. They live in the sea or on land and have a bony shell, which has evolved to protect them against predators. There are around 300 different species of turtle in all shapes and sizes, but some of them are a little more . . . unique than others. 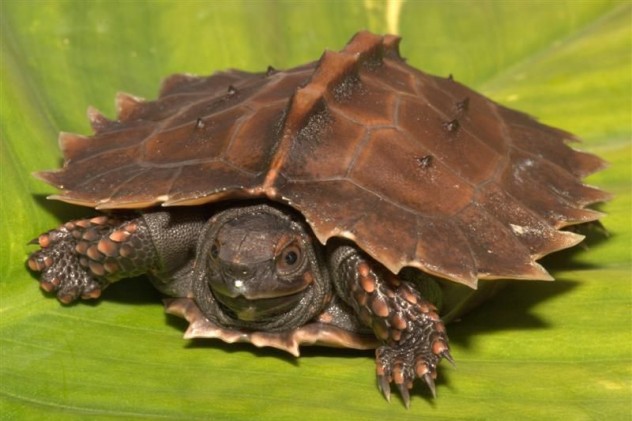 The spiny turtle—Heosemys spinosa—has an amazing shell and is located in Southeast Asia. Like many turtle species, the spiny turtle is hunted for food, and because of this and habitat loss, its numbers have plummeted in recent years.

The turtle’s shell is cog-shaped, with a set of spikes around the edge. In younger specimens, these spikes are sharper, but they become more rounded with age. The spikes deter predators from attacking young turtles, but they also act as a form of camouflage, disguising the turtle as leaf litter. The brown color also helps to mimic leaves. 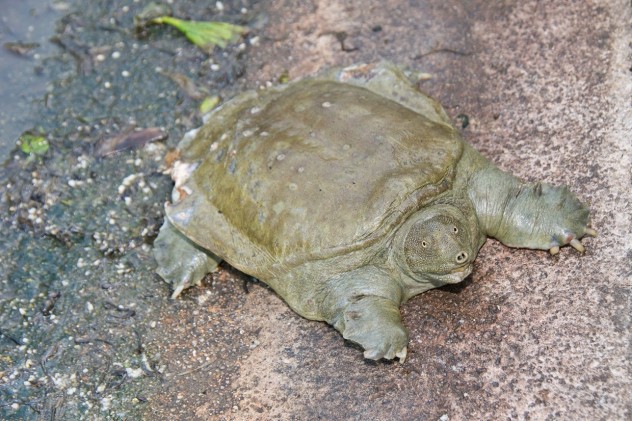 The Chinese soft-shelled turtle excretes urine from its mouth. This is a unique process that hasn’t been observed before in any other animal. This weird ability has allowed the turtle to survive in briny water because it doesn’t lose so much liquid from its body and need to constantly replace it. If it ingested too much briny water, the turtle would be poisoned. Instead, the urine leaves via the mouth, which is then rinsed with water. Only six percent of the urine produced by the turtle leaves its body from the kidneys.

Like most, this turtle is a delicacy in many parts of Asia. In China, there are around 1,500 turtle farms that sell over 90 million turtles a year. Due to high demand in cuisine, the species is now listed as vulnerable. The turtle is native to China, Japan, Taiwan, northern Vietnam, and eastern Russia. It’s also been introduced to new areas, such as Malaysia, Hawaii, and even California. 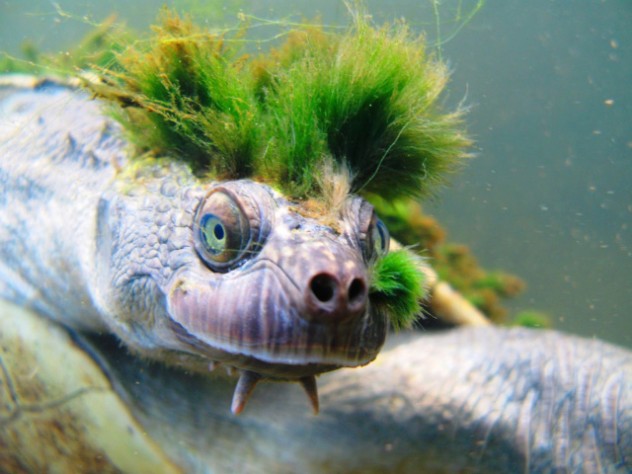 The Mary River turtle is found exclusively in the Mary River in Queensland, Australia. It varies in color and can be red, pink, brown, or black. Its head is small, and the tail is extremely long compared to its body size—growing to near the length of the shell. There are also long protrusions under the turtle’s chin called barbels. It takes 25 years for female Mary River turtles to reach maturity and 30 years for males, which is an exceptionally long time for turtles.

The turtle takes regular breaths out of the water, but it can absorb oxygen from the water as well. The oxygen enters through organs located on its tail. The turtle spends most of its life in the river, allowing algae to grow on its body. It may use the algae for camouflage. In the picture above, the algae on its head looks like hair, which has resulted in the nickname “punk rock turtle.” 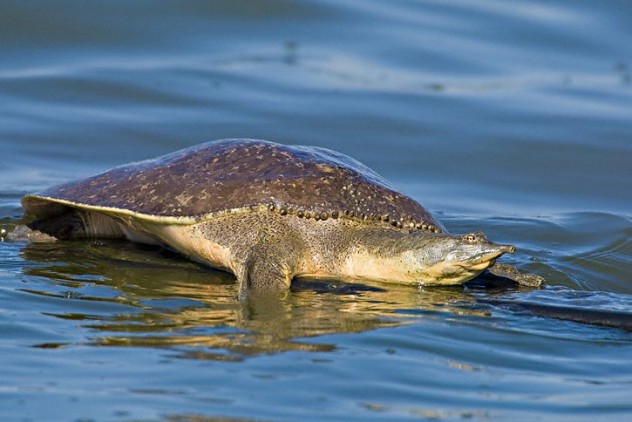 The spiny soft-shelled turtle can be found in the US, Canada, and northern Mexico. It has a unique appearance, with a triangular head and a flat, round shell covered in black spots. These spots are pronounced in young turtles but fade with age. The turtle has a long, thin nose and cone-like projections on the front of the shell.

The gender of spiny soft-shelled turtles’ offspring is down to genetics. In most other turtle species, the gender is the result of differences in temperature experienced by the eggs in sand. 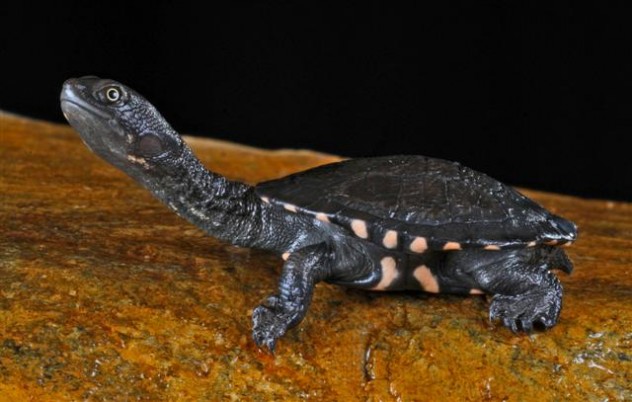 Found in the lakes of Australia, the eastern long-necked turtle has (obviously) an extremely long neck compared to other species, which can grow as long as its shell. The neck is so long that the turtle has to bend its head under its shell, rather than retracting it. This species is also known as the snake-necked turtle because the head and neck resemble a snake. It also has a similar hunting method where it strikes prey by quickly straightening its neck.

When threatened, the turtle will secrete a foul-smelling liquid from its glands. This secretion can travel up to one meter (three feet), causing any surrounding animals to flee. The turtle spends most of its life on land. 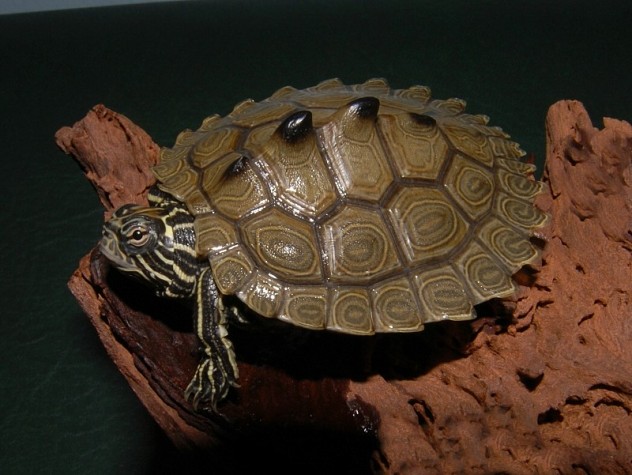 The black-knobbed map turtle—Graptemys nigrinoda—is a small, aquatic turtle found in the freshwater rivers of Mississippi and Alabama. The most prominent features of this turtle are the several spikes on its shell, which become less pronounced in older turtles. There are also beautiful patterns on the underside, which are usually light gray or blue. The turtle’s diet is made up of mostly insects, which it scavenges from the surface of the river. 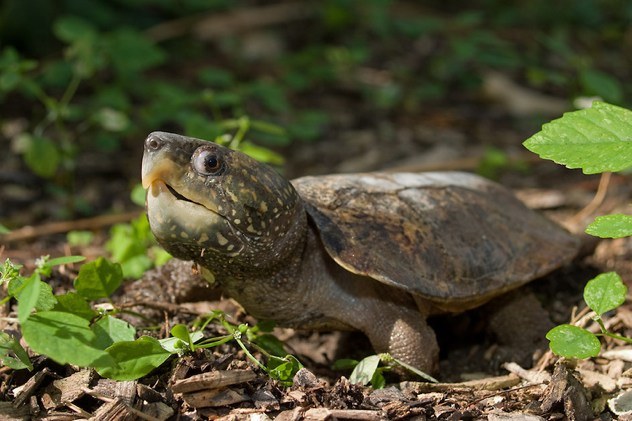 The big-headed turtle is found in Southeast Asia. The most obvious feature of this species is the (you guessed it) enormous head. It has a smooth, sloping shell and brown color. Unlike most turtles, it can’t retract its head into its shell, so it has a bony “helmet” to protect the exposed head. The turtle will often use its powerful jaws to protect itself from any threats.

The big-headed turtle frequently climbs trees and hills using its large beak, claws, and muscular tail to grab things. It’s become an endangered species because of excess hunting by humans. The turtle is commonly eaten in Asia, and they are also captured and sold for the pet trade. 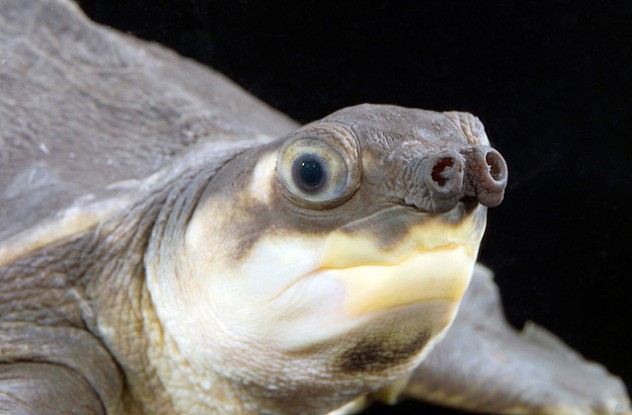 The pig-nosed turtle is indigenous to New Guinea and Australia. It’s the only freshwater turtle with flippers like marine turtles, but its most noticeable feature is its nose, which resembles that of a pig. The nose can act as a snorkel, protruding from the water’s surface. It is is also highly sensitive to movement and used to detect prey in the murky waters.

Sadly, the total population of pig-nosed turtles has decreased by half over the last 50 years because of smuggling: They’re captured in large numbers for the exotic pet industry. Turtle populations are declining rapidly on the island of New Guinea, where they are also harvested for their meat. The turtle is the last known species in the family Carettochelyidae. Fortunately, both Australia and Indonesia have taken steps to protect the species. 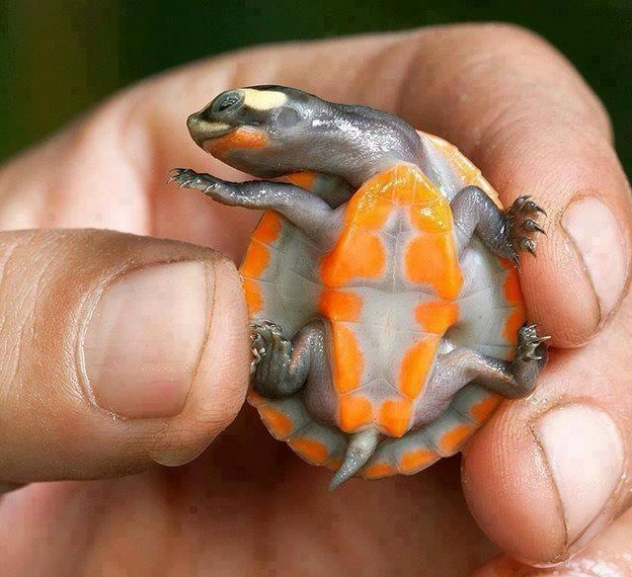 The red-bellied short-necked turtle—Emydura subglobosa—is found in Australia and Papua New Guinea. Their shell is orange at the edges and on the underside (much brighter in juvenile turtles). The color fades as they get older, but the orange markings can still be seen clearly in adults. These turtles spend most of their lives in water, only leaving to nest or bask. When basking, gular movements occur, in which tears run down the turtle’s face and into its mouth, while the mouth opens and closes (this is very roughly analogous to panting in dogs). 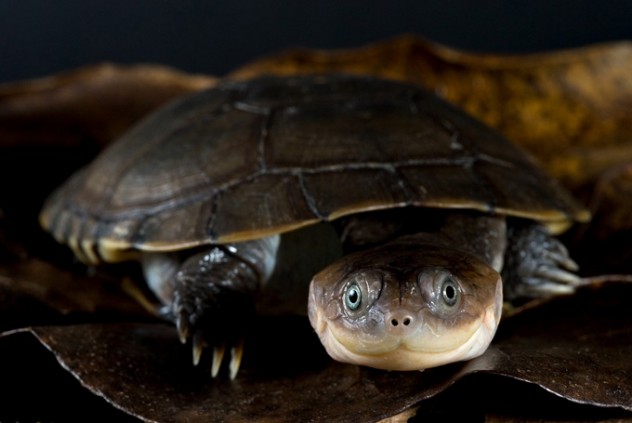 The African helmeted turtle is native to the African continent and has a large distribution from Ghana to Cape Town. The turtle can also be found in Madagascar and the Arabian Peninsula. The turtle produces a strong odor with four glands on each of its limbs, which is fairly intolerable to horses and humans. When females lay eggs, they select a site and then urinate to soften the ground, making digging easier.

The feeding behavior of the African helmeted turtle is also notable. They hunt large prey, such as doves, snakes, and other turtles, in groups. It’s the only turtle species known to hunt in packs. 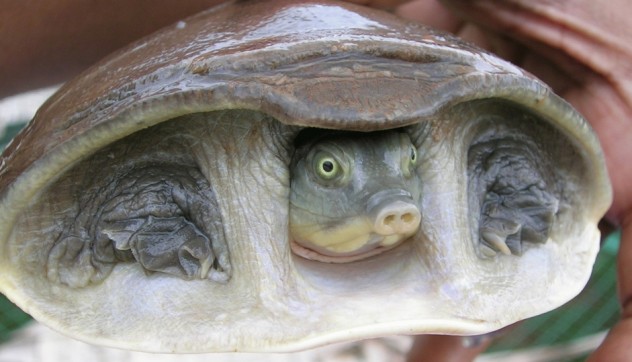 Indian flapshell turtles—Lissemys punctata—have many flaps of skin under their shells that cover their limbs when they are retracted. It’s unknown exactly how the skin flaps protect the turtle from predators. The species can be found in the rivers, lakes, and marshes of southern Asia.