The tools we use and the things we wear are a big part of what separates us from other animals. Some objects are archetypal of human civilization all over the world. Archaeologists have been digging up iconic artifacts for decades, pushing back the known date of when our ancestors started participating in a culture we would recognize. These are the oldest examples we have of humans creating things that typify the span of human progress. 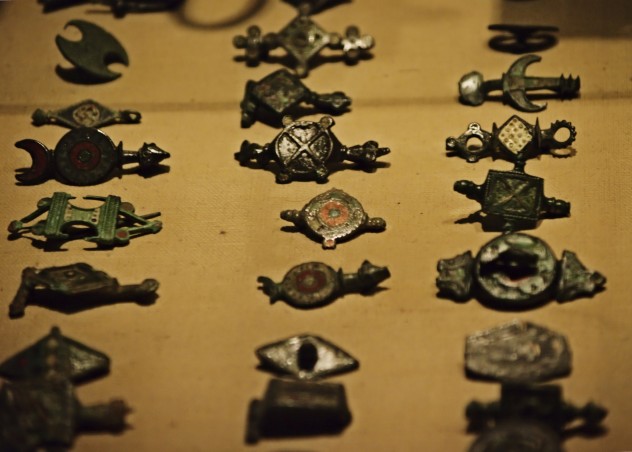 Jewelry is interesting in that it has no value that isn’t social—it doesn’t keep us warm or help us find food. The earliest example of people displaying decoration for its own sake is from 100,000 years ago. Scientists uncovered a collection of shells from Skhul Cave, an archaeological site on Mount Carmel in Israel. Similar items have been found in another site in Algeria.

The shells—from a genus of mollusk known as Nassarius—had a hole drilled through the middle so they could be strung on a necklace or bracelet. The fashion pieces are interesting because they are an antecedent to the diverse beads found around Europe. The previous record holder was another collection of Nassarius shells found in South Africa, though those later ones had been decorated with ocher dye. 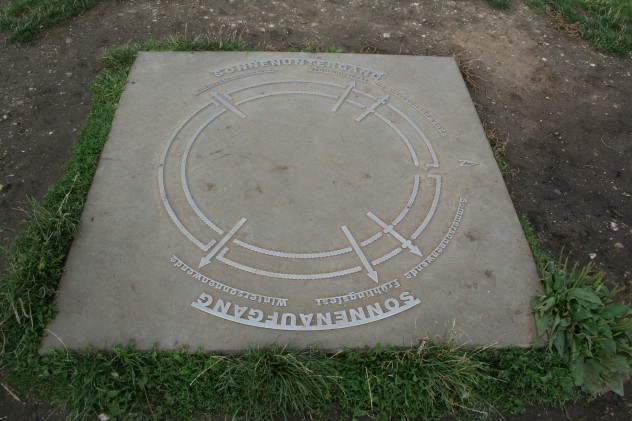 Among our many intellectual endeavors, astronomy is one of the oldest. The cycle of the lights we see in the sky dictates everything from the weather to the availability of food, so it’s not surprising that early humans sought to learn more about what was going on. Nevertheless, researchers in Germany were surprised when they realized they had found a 7,000-year-old observatory from a time when they had believed the land was populated by unsophisticated farmers.

The Goseck Circle, as it is known, is a structure 67 meters (220 ft) wide that was discovered using aerial photography. It has gates that line up exactly with the position of the winter and summer solstices, and archaeologists believe it could be proof of an early form of sun worshiping. An interesting addition to the story of the Goseck Circle is that the earliest known accurate depiction of the nighttime sky was found nearby on a bronze disk. That disk was from 1600 B.C. and contained markings with the positions of the solstices as well as mathematical descriptions of sunrise and sunset. It seems the area was home to our earliest stargazing pioneers for quite some time. 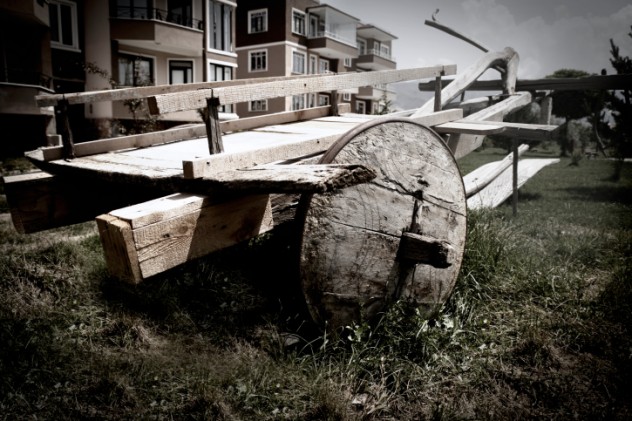 If you do a Google search for “greatest invention since the wheel” it turns up 182,000 results, and really, none of those come close to the cultural impact the wheel has had on civilization. Unfortunately, the identity of its inventor has been lost to time, but the oldest wheel we have found is 5,200 years old. It was discovered in a marsh near the Slovenian town of Ljubljana.

The wheels, 140 centimeters (55 in) wide, was found with its axle, which was 120 centimeters (47 in) long and fit into a square hole in the center of the wheel. Just over half of the wheel survives, but that’s enough for archaeologists to surmise that it would have been part of a two-wheeled cart. The wheel is currently on display until April 2014 in Mainz, Germany. It forms the centerpiece of a bid to make the area a UNESCO heritage site to preserve the archaeological remnants of the pile-dwelling people who lived there when the wheel was created. 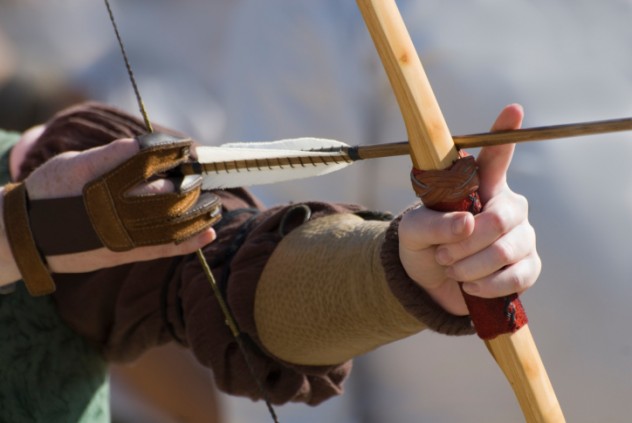 The bow and arrow has seen a resurgence in recent popular culture. It’s a staple of strong female protagonists, like those found in Pixar’s Brave and The Hunger Games. Bows are found around the world, and for thousands of years they represented our most efficient way of killing from a distance.

The oldest intact bows ever found come from Denmark and are around 8,000 years old. They are named for the area in which they were dug up—Holmegaard—and are longbows made of elm. They measure around 170 centimeters (67 in). Since the bows were found in such good condition, it’s been possible to recreate them—and people have. As an interesting side note, the earliest surviving arrows are actually from around 3,000 years earlier, and were found not too far from the Holmegaard bows. Unfortunately, the bows created with these arrows were made from pine and were less suited to surviving the intervening centuries.

The oldest full shoe in the world was found in Armenia and is around 5,500 years old. The leather shoe is around a woman’s size seven and made for a right foot. It is essentially a leather bag tied together with a series of leather straps at the top and is astonishingly well-preserved.

Leather doesn’t normally survive for that length of time, but this shoe had a unique preservative—it was buried under a pile of sheep dung. We don’t know if that’s why it was abandoned in the first place, though it would seem as good a reason as any. Evidence suggests that the owner did plenty of walking, but that the footwear was far from being worn out.

Sandals, on the other hand, date back much earlier—the earliest are nearly twice as old as the leather shoe from Armenia. Sandals made from twined bark were found in 1938 in Fort Rock Cave, Oregon. They were preserved below volcanic ash from an eruption of Mount Mazama 7,500 years ago, though the sandals were already pretty old by that point. They are believed to have been made more than 10,000 years ago. 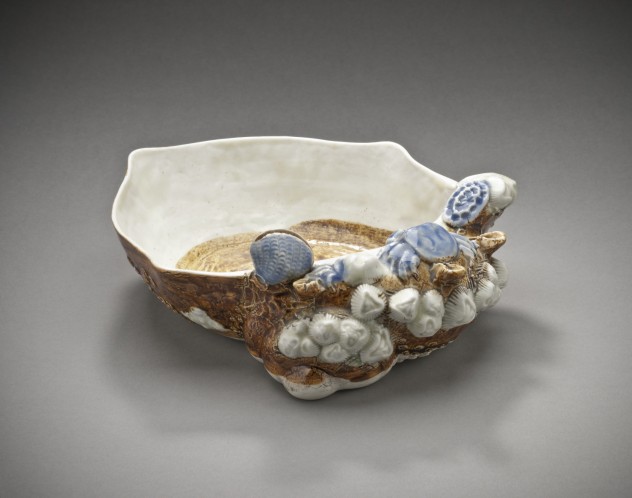 The ability to carry liquids around provides an immediately obvious advantage. Not being limited to staying near a lake or river widens the hunting, farming, and foraging grounds our ancestors were able to cover. Yet surprisingly, the oldest evidence we have of humans using containers was not for carrying water or food, but for mixing paint around 100,000 years ago.

Containers made from abalone shells were found with a selection of other paint-making equipment made from bone and stones. They are 40,000 years older than the next recorded use of a container and 60,000 years older than the oldest surviving cave paintings. It seems that when they’d finished mixing their paint, our early ancestors were making their pictures on something that couldn’t stand the test of time. 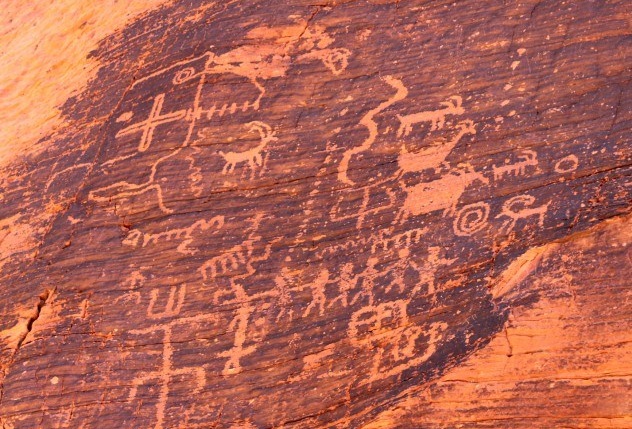 The hunter-gatherer lifestyle doesn’t seem to lend itself to maps. Most travel was done on foot, and you either stuck close to the same village or moved around so much that you didn’t have time to settle in. Scientists in Spain, however, have found a map that dates back to 14,000 years ago.

The map is scratched onto a 13 centimeter by 18 centimeter (5 in by 7 in) stone tablet and shows a number of nearby features. There’s the cave in which it was found, a mountain, a river, and drawings of various animals that would’ve made a nice meal. It’s less than an inch thick, so it would have been possible to carry it around if necessary.

The map was discovered in 1993 but it took researchers 15 years to decipher it. Lead researcher Pilar Utrilla said the map “corresponds exactly to the surrounding geography.” She thinks it might have been used to note down areas with a large number of eggs or mushrooms, or flint for making tools—useful things to remember for a hunter-gatherer. 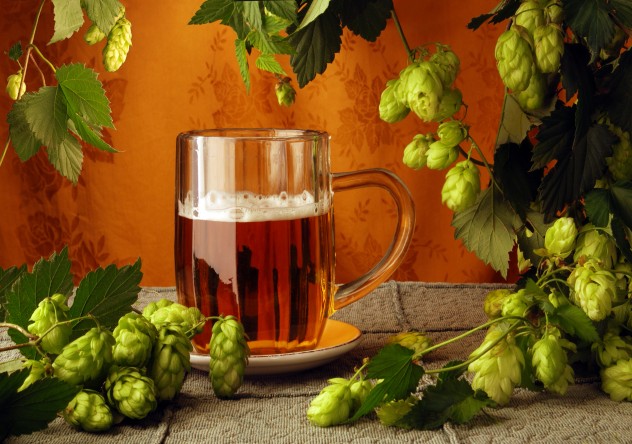 A lot of people enjoy drinking alcohol. What most people don’t know is that every time they crack open a beer, they’re continuing an ancient tradition. The oldest evidence of alcohol comes from central China and is 9,000 years old. It was here that archaeologists found several shards of pottery, which made their way into the hands of Patrick McGovern, an archaeological chemist from the University of Pennsylvania Museum.

McGovern performed some laboratory magic on the pottery shards and found residues of beeswax, rice, and tartaric acid. This latter ingredient he put down to a local plant—Chinese hawthorn. While this is interesting enough in itself, McGovern didn’t want to stop there. He got in touch with the brewing company Dogfish Head, who have a reputation for making unusual beers. They put together as authentic a recipe as they could manage based on McGovern’s lab samples, and brewing began. They called the finished brew Château Jiahu, and the taste has been described as sweet, sour, and smoky. 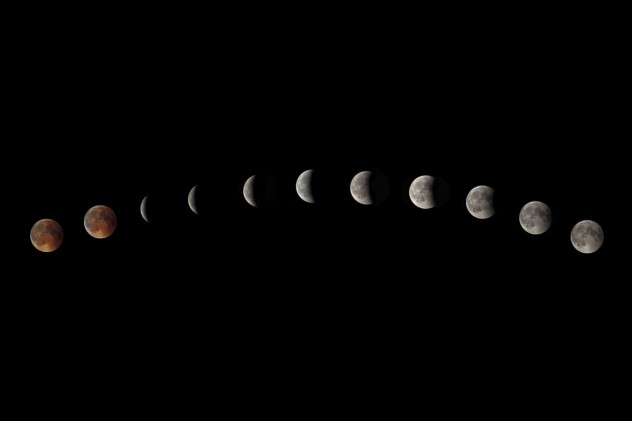 If the Mayans have taught us anything, it’s that ancient calendars can cause people to go a little crazy. The Mayans were a bit late to the calendar game, however. The oldest calendar ever discovered is a field in the north of Scotland. We don’t mean “in a field”—we literally mean the field itself. Archaeologists have discovered a row of 12 pits which appear to reflect the phases of the Moon over the course of lunar months.

The calendar is 10,000 years old, twice the age of the earliest sophisticated calendars from the Near East. It is so much older than the closest contender that the aerial surveyor who found the pits described it as “the place where time itself was invented.” While that may be quite a dramatic claim, it certainly tells us that humans were sophisticated a lot earlier than we realized.

1 The Treasures Of Sibudu Cave 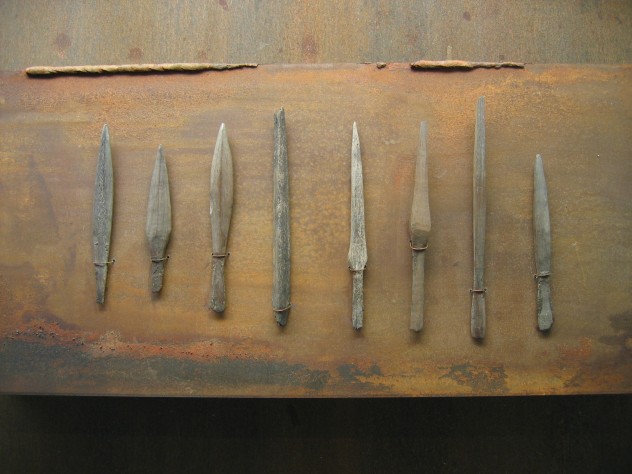 Sibudu Cave in South Africa is an archaeological treasure trove with the earliest examples of at least three different uses of technology. The remnants of civilization in the cave stretch back over 77,000 years, and include the oldest needle, the oldest bedding, and one of the earliest ever bone arrowheads. Also, remember the previous record holder for oldest jewelry that we mentioned before? That was from here.

Sibudu has also offered up evidence of cooking, glue making, and even animal traps. It’s regularly helped push back the known timeline of when our ancestors began performing complex tasks. It’s a hugely valuable record of our history as a species, and we’ve still only excavated 10 percent of it. Sadly, it’s being threatened by housing and industrial developments that have been proposed in the area.

Efforts by local campaigners have been able to secure a 200-meter (650 ft) exclusion area around the cave—for now. Caves elsewhere have been excavated for 100 years and they often had less promise than Sibudu. These discoveries in the cradle of humanity can teach us about the lives of the ancestors of literally billions of people. Let us hope we get the chance to learn while the opportunity is still there.