Islands remain a mainstay for vacationers and romance novelists. Beyond stress relief and imaginary heroes, islands are complex worlds. There are mysterious places that challenge experts with artificial islands and unknown rituals.

Islands are also mass graves and the ocean’s trash bins—to a horrifying degree. Then there are the hills where sheep carry cameras for Google, an island with ancient Bitcoin, and one of the most visited places on Earth that does not exist. 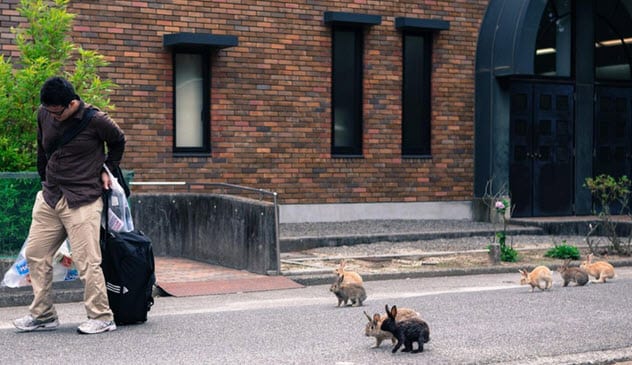 In the past, Okunoshima was rabbit hell. The island was used by the Japanese to test poisonous gases during World War II. The laboratory rabbits were gassed with substances that went on to kill up to 80,000 Chinese during the 1930s and ’40s.

Today, the scene looks different. Rabbits hop everywhere on Okunoshima. People adore them. Tourists spoil the bunnies with food and photo sessions. Predators such as dogs, cats, and hunters are banned from the island.

Mysteriously, nobody knows where the rabbits came from. The original test rabbits were euthanized by US personnel when they took the island during the occupation.

There is a rumor that schoolchildren released eight bunnies in 1971. Eight was enough. Without predators, the prolific creatures’ population grew. These days, hundreds of feral rabbits crowd around people for snacks.

As idyllic as it seems, things are not perfect. Living on treats has shortened the rabbits’ life span to two years. Their numbers have also destroyed the ecosystem. With no natural food left, they depend on visitors to feed them.[1] 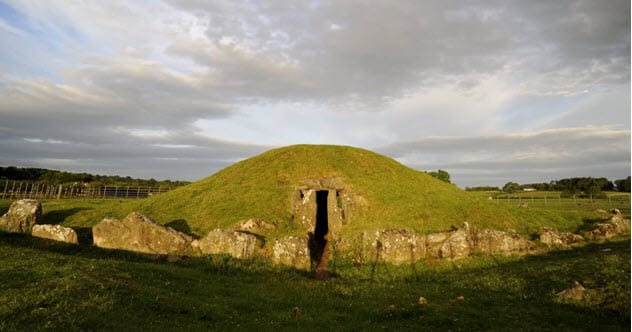 Anglesey is a British island famously linked to the Druids. The latter were an order of priests with magical powers who supposedly existed around 2,000 years ago. There is no evidence that the Druids were real, but Anglesey’s Neolithic and Bronze Age buildings are tangible and older to boot.

The star is a Neolithic monument known as Bryn Celli Ddu. Excavated between 1928 and 1929, the 5,000-year-old tomb’s entrance tunnel aligns with the midsummer Sun at dawn.[2]

In 2019, archaeologists started excavations on a burial mound located 46 meters (150 ft) away. The hope was to find out more about the builders. Interestingly, the mound was added to the landscape 1,000 years after Bryn Celli Ddu.

Other finds included a circle of pits, artifacts, and structures placed around the passage tomb. Although personal information on the builders was lacking, it became clear that successive generations returned for thousands of years to add to the complex. 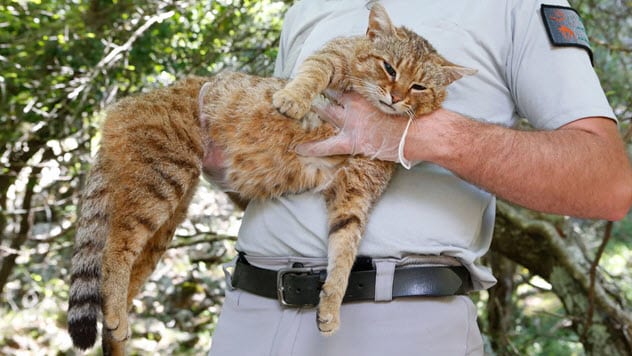 An unusual animal lives in the forests of Corsica, a French island. Locals call it a cat-fox. The felines are bigger than the average house cat, and their tails have two to four rings. The critters have doglike teeth, unusually short whiskers, and broad ears.

In 2012, wildlife rangers received their first chance to do DNA tests. Researchers coated a stick with a scent the cats would hopefully find attractive and left it in the wilderness. When the team collected the staff, it had been so affectionately rubbed by cat-foxes that they left their fur behind.

The hair confirmed suspicions that the animals were an undocumented species and not feral domestic cats. Indeed, their DNA matched no other species on the planet. However, it was similar to the African forest cat (Felis silvestris lybica).

A plausible theory suggests that farmers brought the cats to Corsica around 6500 BC. If the theory is proven, the cat-fox could be viewed as an ancient feline species that survived for thousands of years but only recently came to the world’s attention.[3] 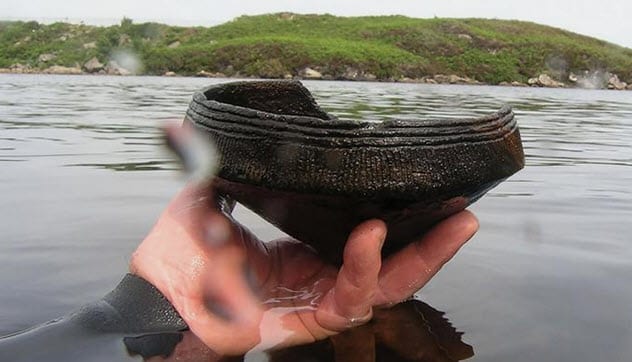 Scotland’s Outer Hebrides are dotted with over 600 artificial islets called crannogs. For some reason, people felt the need to drag stones to the middle of lakes and waterways and make their own islands. Most are Iron Age relics, but a few were recently dated to an earlier Neolithic Britain (4000-2500 BC).

This is a hazy time period. Although people built intriguing monuments like Stonehenge, they left no written records. Neolithic crannogs proved that the artificial structures were 3,000 years older than previously thought. This surprising leap back in time did not come from the islets but from a mysterious ritual.

In 2012, a diver found Neolithic pottery around the Outer Hebrides’ crannogs. Thanks to the vessels, archaeologists eventually identified five islands from this time.[4]

Demonstrating a behavior unknown to British archaeology, people went to the crannogs to throw their best vessels into the water. The crannogs likely had ritualistic significance, but the details are lost to time. 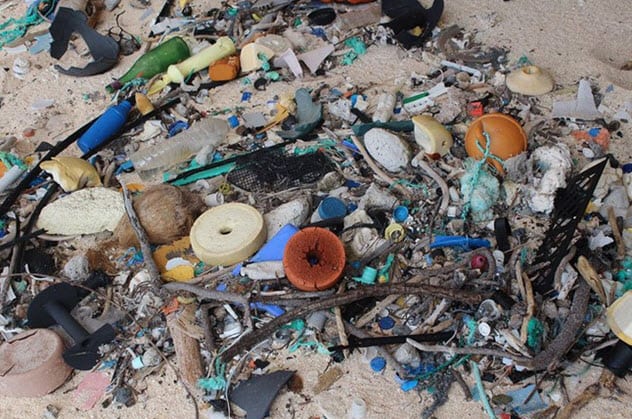 Henderson Island in the South Pacific is uninhabited. There are no people or factories discarding plastic trash everywhere. Despite this, when researchers went to the island in 2017, they were shocked by the pollution.

The sheer volume was enough to traumatize any conservationist. The team counted up to 671 pieces of plastic per square meter. This was the highest number ever recorded anywhere in the world. Overall, Henderson creaked under an estimated total weight of over 17 tons. This amount balloons daily. On just one of the island’s several beaches, over 3,500 new plastic pieces wash ashore every day.

There is a reason why trash makes a beeline for this remote island. Henderson lies inside the swirling currents known as the South Pacific Gyre. Debris collected elsewhere rides the currents until they connect with the island. Indeed, the researchers found plastic manufactured in 24 countries.[5]

Sheepview360 in the Faroe Islands

Google Street View has visited nearly every place on Earth. This did not sit well with the residents of Denmark’s Faroe Islands. For years, they waited for their beautiful islands to be added to the 360-degree viewing service. Finally, the islanders’ patience ran out.

The Faroe Islands are small, but they have a dedicated tourism bureau. Staff member Durita Dahl Andreassen came up with a novel idea. She got her hands on 360-degree cameras and, with a shepherd’s blessing, attached the devices to local sheep.

The creatures meandered all over the 18 islands and recorded the landscapes. The footage from the project, called “Sheep View 360,” was uploaded to the official Street View service. The islands are known for their sheep, which outnumber the human population, but this was surely the strangest camera crew that ever contributed to Google Street View.[6] 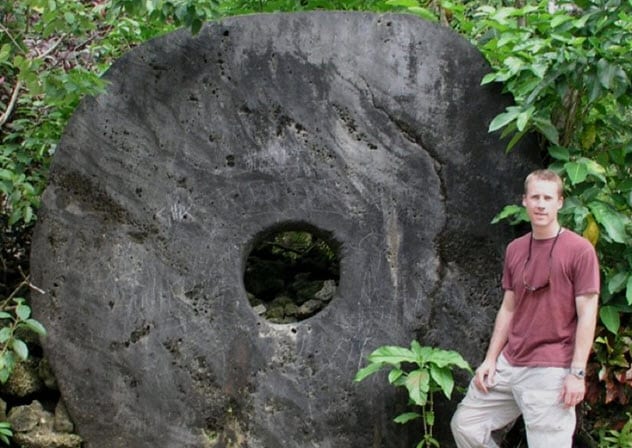 There are curious artifacts on the Pacific Island of Yap. A rai stone is a limestone disk with a hole in the center. Some are bigger than a person. That’s a cumbersome thought, considering that the wheels were used as currency. They were exchanged as wedding gifts, used for political reasons, paid as ransoms, and kept as inheritances.

Due to their size and fragility, a new owner could not always move the stone closer to home. For this reason, the community had an oral system so that everyone knew the names of stone owners and the details of any trades.[7]

Although the rai stones date back hundreds of years before European contact, this oral tradition is similar to the blockchain of modern cryptocurrencies. The blockchain is an open ledger of cryptocurrency ownership that provides the same transparency that the Yapese islanders used to maintain community control over information and security.

Although rai stones and cryptocurrencies could not be more different, archaeologists were surprised by how the ancient “oral ledger” and today’s blockchain performed the same duty for their respective currencies. 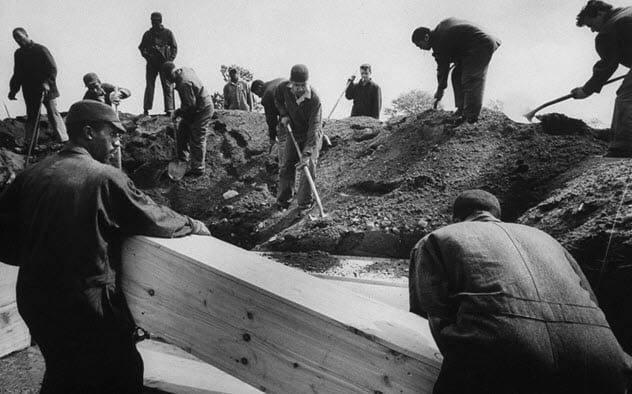 New York City’s Island of the Dead came by its name honestly. Its real name is Hart Island. Since 1868, it has served as the city’s cemetery for the less fortunate.

When nobody claims a body or the family cannot afford a funeral, the deceased is taken to the 101-acre island for burial. Around one million bodies line mass graves, with pine coffins stacked on top of each other. The body count grows by roughly 1,000 every year.

In 2018, things began to spill over. Erosion revealed so many skeletons along the shoreline that police called it “bones beach.” Forensic anthropologists collected or marked most of the exposed bones with flags, but the problem is far from solved.[8]

Powerful weather such as floodwaters and storms continue to tear at the island’s older burial grounds. The Federal Emergency Management Agency (FEMA) took the spillage so seriously that it gave $13 million toward a project to stabilize the island’s shorelines. 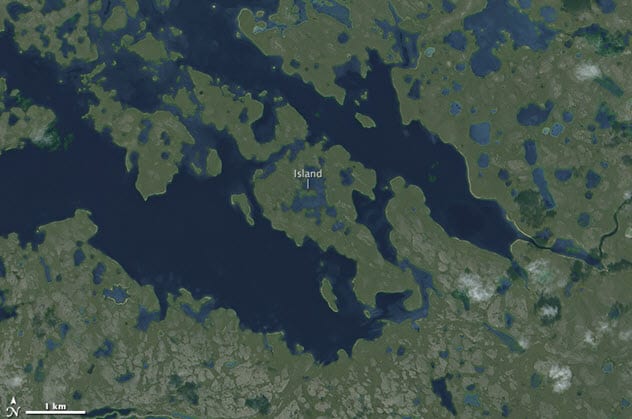 In 2012, fans of the strange phenomenon took to Google Earth to find out if there was an even bigger stack of islands and lakes out there. After an exhaustive search, they found a new winner in Canada. At the center was a strip of land so small and nameless that no human had probably ever been there. 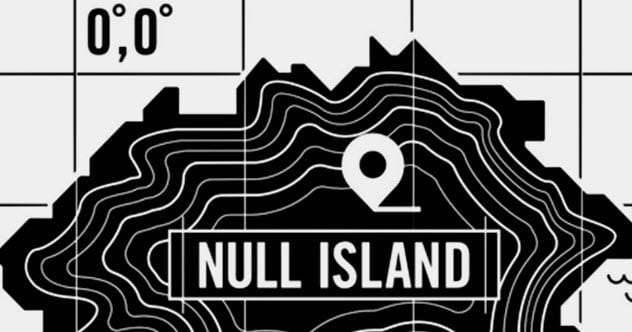 When users search for a coffee shop or tourist attraction, Google Maps uses a geographic information system (GIS) to plot coordinates on a map. GIS is responsible for that icon marking the exact location of a destination.

This system has a ghost in the machine. Glitches can cause GIS systems to revert to 0°N 0°E on the map. This happens so often that geographers have named the spot Null Island. Thanks to technological errors, it is one of the most “visited” places in the world.

When a GIS system reverts to those coordinates, it brings along the location the user searched for. As a result, the imaginary Null island is packed with street addresses and attractions.

To the fans of Null Island, it does not matter that none of these things is really there. They designed a national flag and a detailed history for the island. The coordinates 0°N 0°E are a real place in the South Atlantic Ocean. However, instead of an island, the spot holds a buoy used by NOAA (National Oceanic and Atmospheric Administration) to gather climate data.[10]