Every year, Americans consume more than 200 million turkeys. But how much do you know about the bird that Benjamin Franklin thought would represent America better than the bald eagle?

10 Most Domestic Turkeys Are Artificially Inseminated 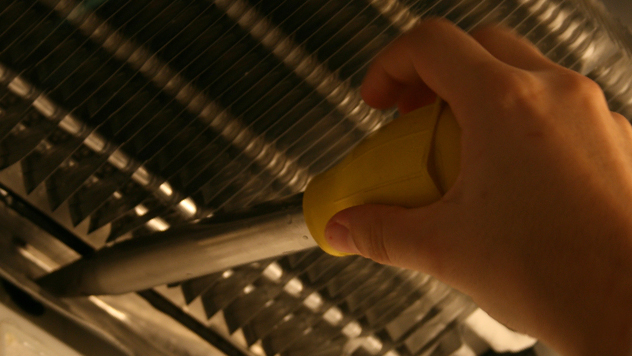 The overly large breasts on commercial turkeys make them unable to mate. As a result, broad-breasted turkeys require artificial insemination in order to produce fertile eggs.

However, you can’t just hand a tom a picture of a large-breasted lady hen and expect him to ejaculate into a cup. Toms must be “milked” of their semen. This is done by a crew that usually consists of at least four handlers.

It takes about two minutes to obtain a tom’s semen, usually with no more than four strokes of the cloaca. The National Institutes of Health recommends no more than one or two per collection in order to prevent injury (to the bird, not the handler).

The tom’s semen is collected in a small glass, after which it is drawn out with a syringe and placed in a glass bottle. The semen must be used quickly, preferably within 30 minutes of extraction. It is inserted into a hen with a syringe or plastic straw—in essence, a turkey baster.

If you prefer a turkey made the old-fashioned way, and are willing to spend $150 or more, you can opt instead for a “Heritage” bird. To qualify as Heritage, a turkey must mate naturally, grow slowly, and have a long and productive lifespan. 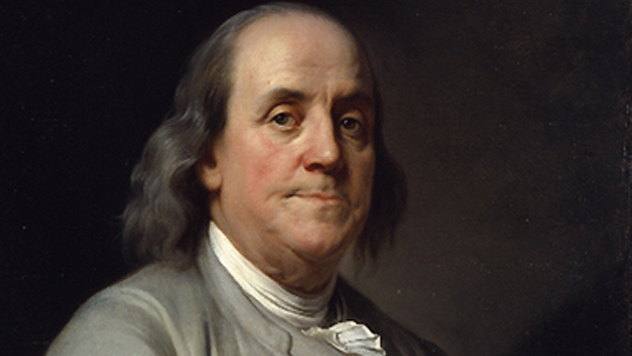 In a letter to the Pennsylvania Journal written in 1775, Franklin suggested that the rattlesnake was the “emblem of magnanimity and courage” that best represented “the temper and conduct of America.” But by the time the Continental Congress appointed him, Thomas Jefferson, and John Adams to design the national seal, Franklin had apparently changed his mind.

Yet Franklin’s proposal—a scene depicting Moses and Pharaoh—did not meet with the approval of Adams and Jefferson, who wanted something more allegorical. Eventually, the three compromised on a depiction of Lady Liberty supporting a shield representing the states. The Continental Congress rejected the design, and after a series of further compromises, the bald eagle became our national symbol.

Benjamin Franklin was not happy with the choice. In a letter to his daughter, written some eight years later, he said: “For my part, I wish the eagle had not been chosen as the representative of this country. He is a bird of bad moral character; he does not get his living honestly . . . in truth, the turkey is in comparison a much more respectable bird, and withal a true original native of America . . . He is, besides (though a little vain and silly, it is true, but not the worse emblem for that) a bird of courage.” 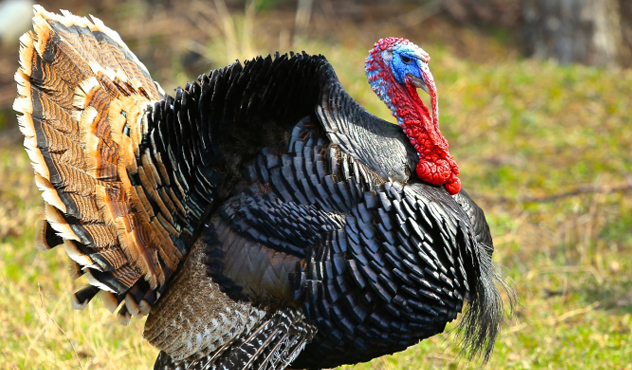 Clothes may make the man, but it’s feathers that help a tom attract a mate. While hens are generally drab brown or gray, a tom’s chest boasts iridescent feathers in shades of green, copper, bronze, red, purple, and gold. Like a peacock, he also has a “fan” of 18 tail feathers up to 38 centimeters (15 in) long, which he displays during breeding season.

The tom also has a “beard”—a specialized feather growing from the middle of his chest. While a wild turkey’s beard usually tops out at about 23 centimeters (9 in), some grow even longer. The longest one on record measured an incredible 46 centimeters (18 in). Some 10 to 20 percent of hens have beards, too, though they are shorter than those found on toms.

A few rare wild turkeys also boast one of four unusual colors, known as “phases.” These can be smoky gray, erythritic (reddish), albino (very rare), or melanistic—the turkey version of a goth phase, in which his feathers are all black. 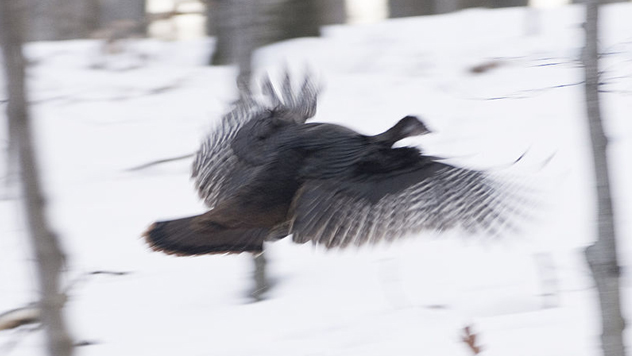 Most turkeys Americans consume are farm-raised, “broad-breasted” varieties. These so-called “domestic” birds have been bred to be extra-large, so as to produce meat efficiently at the lowest possible cost.

Because of their weight, domestic turkeys are slow and unable to fly. But wild turkeys, which weigh half as much and have less breast meat, can run at speeds of 32–40 kilometers (20–25 mi) per hour, only slightly slower than the world’s fastest humans.

Wild turkeys can also fly short distances at up to 89 kilometers (55 mi) per hour. This helps them escape their natural predators, which include coyotes, foxes, skunks, raccoons, snakes, and dogs. It also allows them to roost in trees beginning at dusk, which protects them from predators who have better nighttime vision.

6 Turkeys Can Spot You A Mile Away 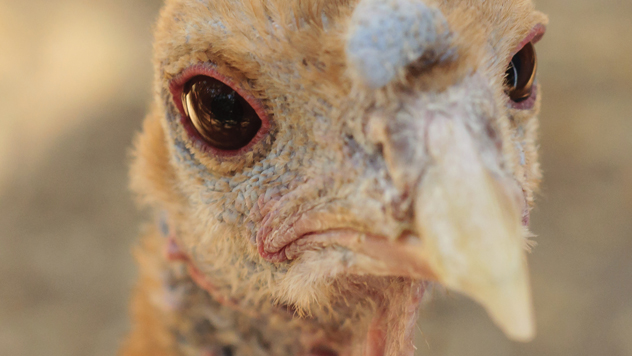 Though turkeys don’t see well at night, their daytime vision is impressive. A turkey’s eyes are spaced far apart and are on the sides of its head. This gives the turkey a visual field of 270 degrees, compared to our own 180. And unlike our eyes, which are unable to focus on things in our peripheral vision, a turkey’s eyes can focus clearly throughout its entire field of sight.

Those eyes—along with the turkey’s ability to rotate its neck all the way around—enable a turkey to spot a predator (or hunter) from a mile or more away. But because its eyes are on the sides of its head, the turkey lacks 3-D vision. It compensates for this by bobbing its head to approximate depth perception.

Turkeys also have seven different types of photoreceptors in their eyes. This gives them excellent color vision, as well as the ability to see light in the UVA spectrum. As a result, turkeys see the phosphates found in many laundry detergents as a bright, fluorescent blue. So if you use one of these detergents, you may as well skip the camo—you aren’t fooling the turkeys one bit. 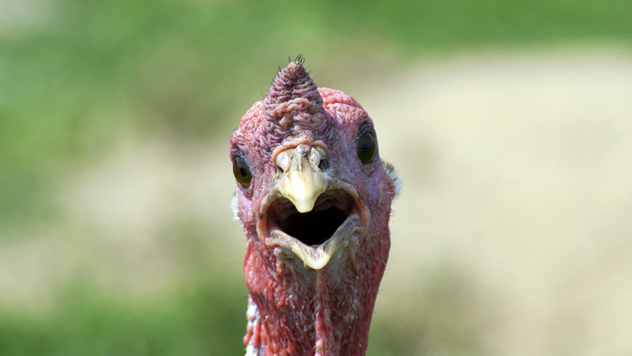 Only male turkeys make the distinctive sound we call a “gobble.” During breeding season, mature toms establish their dominance with brief fights. The winner gets to breed, while immature males (“jakes”) and the losers are relegated to watching and serving as bodyguards.

Gobblers generally cruise in pairs, with the subordinate male helping the dominant one attract a single hen—or, more often, a harem. During the wooing phase, both dominant and subordinate gobblers blush brilliant red and blue about the face and throat. They also strut with their tails fanned and their wings dragging along the ground.

Only the dominant male gobbles. Each gobble lasts no more than a second, but it can be heard by hens up to a mile away. It helps that turkeys have excellent hearing, even though their “ears” are nothing more than small holes in their heads behind the eyes.

Females don’t gobble but may cluck and make small chirping noises. Turkeys of both sexes also cackle, purr, and yelp, and young turkeys whistle to their flock mates when lost. 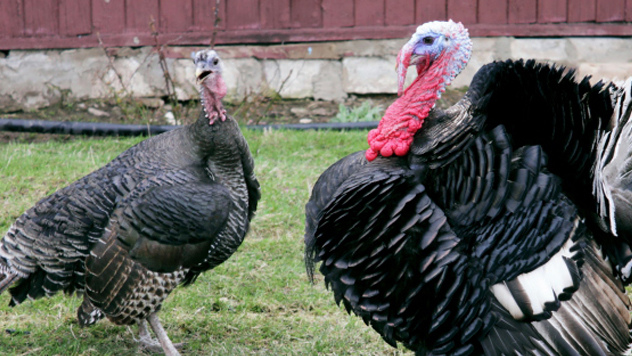 After attracting a hen, the tom stands on her and massages her back by lifting one foot and then the other for approximately 10 minutes. When the hen is ready, she lifts her tail and the tom mounts her.

Despite this long build-up, the cloacal kiss itself is over in just a few seconds. The tom then disappears, and takes no part in nesting or raising his offspring.

A single mating usually produces enough sperm to fertilize an entire clutch, and a hen can store sperm in her oviduct for up to four weeks. When she’s ready, she lays a fertilized egg almost every day until her nest contains between eight and 15 eggs. Then she incubates the eggs continuously until they hatch some 25 days later.

The young “poults” don’t stay put for long. Less than 24 hours after their birth, they’re out of the nest looking for food.

3When It’s time For A Wild Turkey To Mate, Size Matters 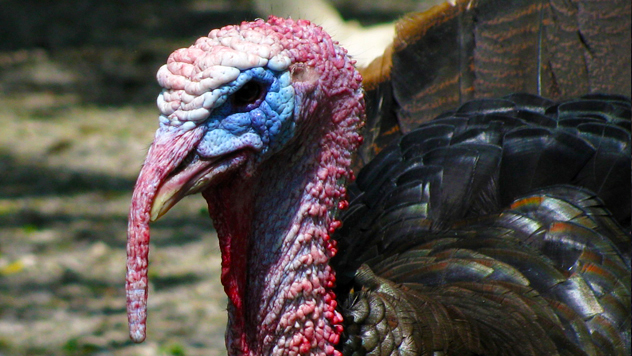 If you’ve ever seen a male turkey strutting, you may have wondered about that fleshy protuberance hanging from its beak. It’s a snood, and all mature male turkeys (known as “toms” or “gobblers”) have one. The snood appears to serve no functional purpose, other than attracting a mate. And surprise! Size matters. The tom with the longest snood usually gets the hens.

When a tom gets excited, his snood becomes engorged with blood and enlarges, much like a penis, which a turkey doesn’t have. Instead, both male and female turkeys have a cloaca, an outlet into which the intestinal, urinary, and genital tracts open. During sex between wild turkeys—called a “cloacal kiss“—the male’s semen is passed from his cloaca to the female’s, and from there to the hen’s oviduct.

Other parts of the tom that flush when he’s excited include the caruncles, also called nodules (the fleshy orange or red bumps that droop from the tom’s neck), and the dewlap or wattle (the fleshy flap of skin attached to the tom’s throat).

2 Some Female Turkeys Can Reproduce Without A Male 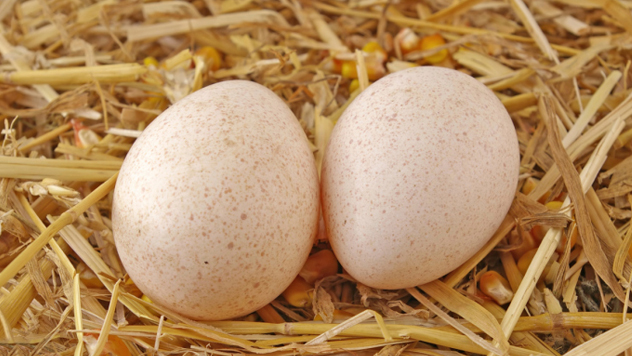 All turkeys born of parthenogenesis are male, and they’re indistinguishable from males produced by natural or artificial mating. Although turkey parthenogenesis is rare, the incidence can be increased by vaccination with certain live viruses, and by keeping hens within the sight and sound of nearby males. 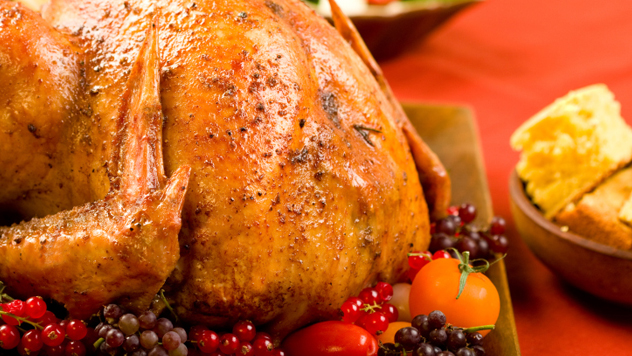 The largest turkey on record was an 39-kilogram (86 lb) bird named Tyson, who took first place in 1989’s Heaviest Turkey competition in London. By way of contrast, the largest wild turkey recorded by the National Wild Turkey Federation weighed a paltry 17 kilograms (37 lbs).

Tyson was later auctioned off for charity, where he sold for a record $6,692. Since a “dressed” turkey typically weighs 75 percent of a live one, Tyson would have weighed almost 30 kilograms (65 lbs) after plucking, at a cost of over $100 per pound.

Other notable turkey-related records include the fastest time to carve one—3 minutes, 19.47 seconds—and the largest gathering of people dressed as turkeys—661 people in Dallas, Texas who had nothing better to do in November 2011.

And you thought Star Trek conventions were weird.

Jackie Fuchs is a writer and attorney with a B.A. in linguistics from UCLA and a J.D. from Harvard. In a former life she played bass (as Jackie Fox) for the ‘70s all-girl rock band, The Runaways, with Joan Jett and Lita Ford. Jackie is a former journalist and Huffington Post blogger, with an interest in word origins and medieval history. You can read some of her work at JackieFoxDotNet.