Shinto is one of the main religions of Japan. But it’s also much more than that—in many respects, Shinto is the cornerstone of Japanese culture. Formed from the nature-worshiping practices of the ancient Japanese, Shinto has no weekly service, no holy book, and an untold number of deities. It stands apart from other religions because of its inclusive nature, inviting people of any faith to participate in its rituals. 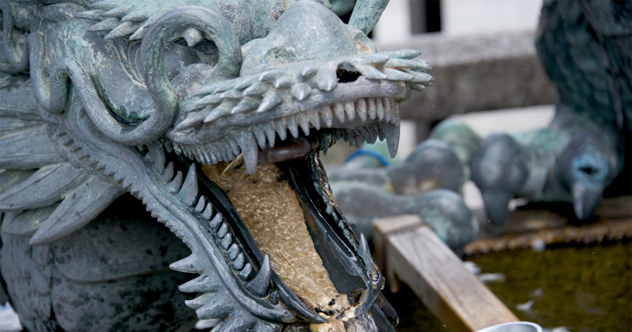 Divine beings in Shinto are called kami, and are often referred to with the phrase “yaoyorozu no kami,”—literally, eight million kami, though a better translation would be simply “many” kami. While there are traditional personified gods in Shinto, kami also include spirits that embody natural forces like wind and fire, animals, or an aspect of the landscape deserving of respect or awe, like mountains or waterfalls.

Even humans can be revered as kami after death if they lived great or especially pure lives. An important distinction between Shinto’s kami and the deities of other religions is that kami are not perfect, infallible beings, but are of a dual nature, sometimes gentle and generous and sometimes destructive and violent, just like the changing faces of nature.

For all of the kami in Shinto, the sun goddess Amaterasu is easily the most important. According to legend, Amaterasu was born from her father Izanagi’s left eye as he washed to purify himself after visiting the underworld. Upon seeing her warmth and blinding light, Izanagi sent her to rule “Takamagahara,” the high celestial plain.

Along with her siblings, she created ancient Japan by painting it into existence. Amaterasu then sent her grandson, Ninigi, to Earth, and it is through him that the royal family claim kinship to the sun goddess. She also gave a sword, a jewel, and a mirror to her grandson, and it is these items that make up the Imperial Regalia of Japan. 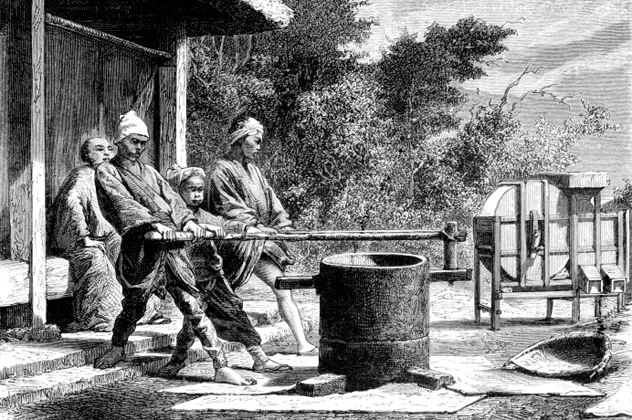 Amaterasu may light the world, but Inari feeds it. The god of rice, wine, prosperity, foxes, swordsmiths, and merchants has over 32,000 of Japan’s 75,000 Shinto shrines in his name. Inari has no one form, and has been described as both an old man and a young woman, but the one constant is that he almost always comes bearing rice in some form.

More recently, Inari has taken the shape of a fox for some worshipers because of his mythical association with the creature. Indeed, Inari’s shrines can be identified by the pair of fox statues that guard the entrances. Inari’s main shrine is Fushimi Inari in Kyoto, noted for the large number of “torii,” or entrance gates, that lead to it. 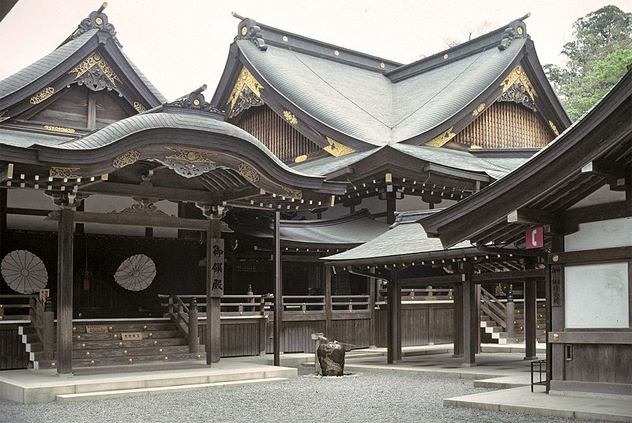 Ise Jingu is the most sacred Shinto shrine in all of Japan, dedicated to the sun goddess Amaterasu. The Ise Jingu complex is made of about 120 shrines and buildings. The most important shrines are the inner shrine, Naiku, and the outer shrine, Geku. Though the site was founded in the fifth century, the shrines in Ise Jingu are no more than 20 years old. Every two decades a new, identical shrine using new materials and ancient techniques is built adjacent to the old shrine in a ceremony called “shikinen sengu.”

Once construction is complete, the old shrine is torn down and the site where it stood is strewn with large, white pebbles. A tall post is erected in the center of the plot, and a protective box is built around it to keep the land sacred for the next 20 years until shikinen sengu begins again. 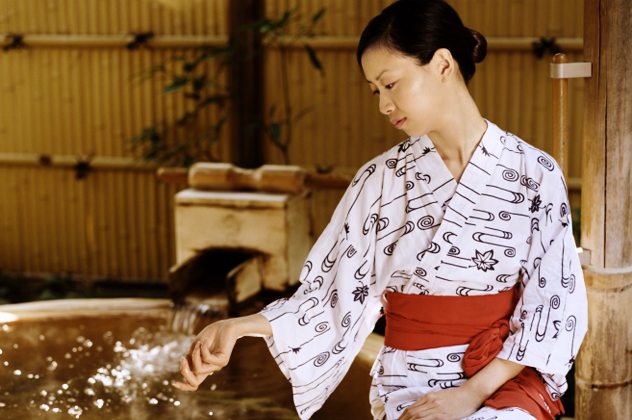 One of Shinto’s core tenets is the idea of purity and cleanliness of mind, body, and spirit. This is perhaps the most pervasive idea of Shinto, easily observable in everyday Japanese life, from the removal of shoes at the door to the reluctance of the sick to take organ donations from the dead.

“Tsumi” translates to sin in English, but the Japanese definition encompasses a larger meaning, including not only spiritual sin but also pollution of the body from contact with actual dirt, the sick, or death. For this reason, purification rituals were developed to cleanse the body and spirit. The simplest and most common ritual is “temizu,” the washing of the hands and face to achieve purification before approaching a Shinto shrine.

Another common ritual is “shubatsu,” which is when salt is used to cleanse not only people but also the ground it’s sprinkled on. Notably, sumo wrestlers practice shubatsu before the start of a match to purify the ring. 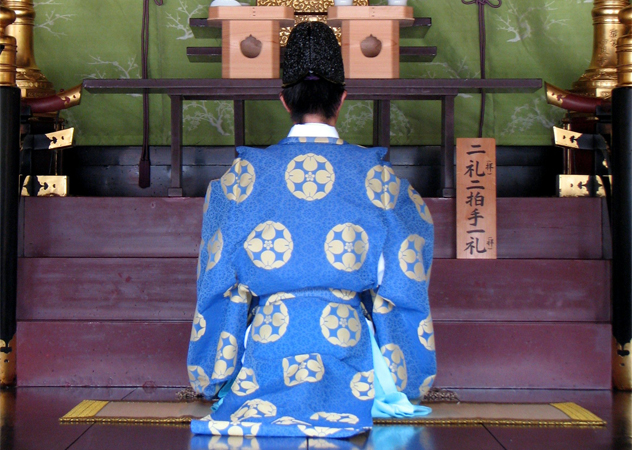 Even though there is no weekly service, Shinto priests are kept very busy. They greet visitors, perform ceremonies, get involved with local festivals and national holidays, and keep up the shrines. But with only one priest for every four shrines, most priests only work part-time at individual shrines. They are often assisted by young girls called miko, who are usually either high school girls working part-time or relatives of the priest.

Traditionally, miko served a much larger role, performing a dance called kagura to entertain the kami or entering trances to communicate with the spirits. Some larger shrines like Ise Jingu still have their miko perform the traditional dances. 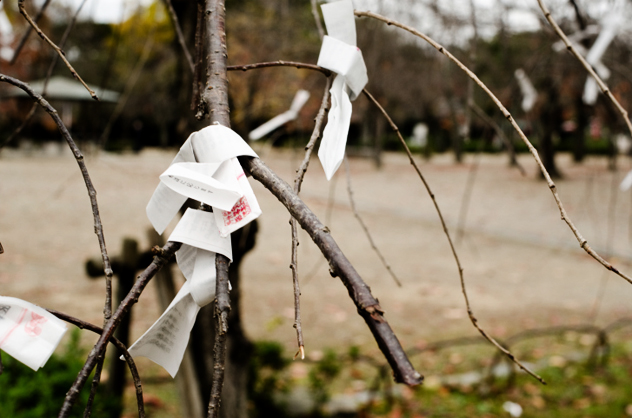 Every Shinto shrine has at least one stall—usually run by the shrine’s miko—at which visitors can purchase omikuji, omamori, and ema. Omikuji are fortunes drawn at random. Sometimes they’re good, sometimes bad, but they’re almost always associated with the kami of the shrine at which it was purchased. The message is believed to come straight from the kami and thus is sacred. Once drawn, the omikuji is traditionally tied to a tree near the shrine. This serves to either make the good fortune come true or to wish away the bad fortune.

Omamori are amulets or charms to draw the good graces of the kami. The omamori can grant protection, ease or cure illness, or even offer good luck. The charms must be kept close at hand and come with a time limit, after which they need to be returned to the shrine for disposal. Ema are wooden boards on which prayers and wishes are written and then hung up at the shrine for the kami to see. 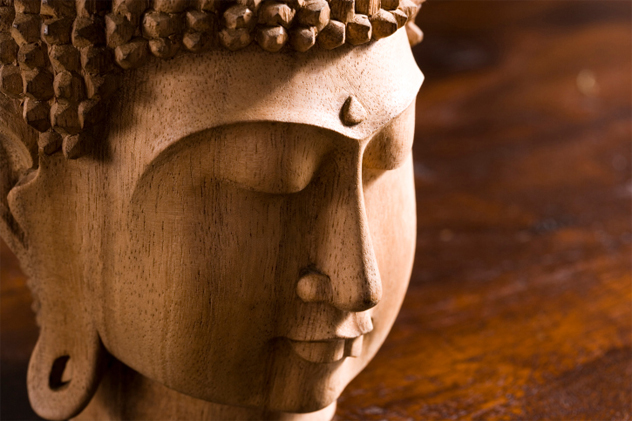 In the sixth century, Buddhism was introduced to Japan from Korea and China. At its introduction there was immediate disagreement in the royal court as to whether the Emperor should adopt Buddhism, but the massive influx of immigrants to Japan held the religion sacred, and slowly but surely Buddhism began to influence the country. Though Japan never fully converted to Buddhism, its complimentary teachings blended with Shinto; Buddhist temples sprang up next to Shinto shrines and kami were said to defend the Buddhas.

There was backlash from time to time—especially during the Meiji period, when Shinto was installed as the state religion and there were attempts to strip Buddhist influence from Shinto. But public demand has since brought Buddhism back. 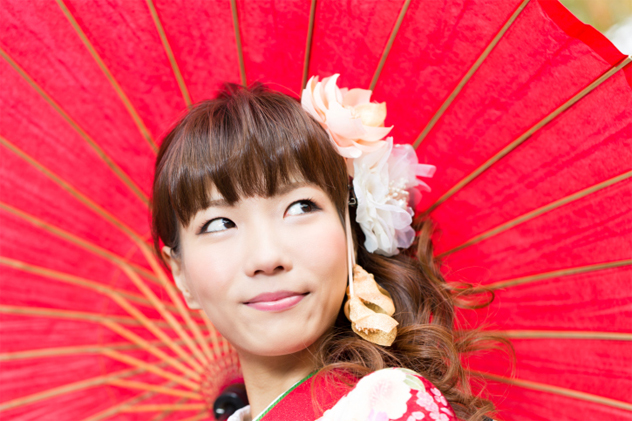 The most important holiday in Shinto is the New Year’s Day celebration. On New Year’s Eve, the local Buddhist temple rings its bells 108 times, once for every sin, with the last peal at exactly midnight. Then, for the first three days of each new year, people gather together to celebrate the new year by eating, drinking, and being together. The entire house is cleaned of the previous year’s dirt and decorated.

One of the most important things to be done during these three days is to visit a shrine. Nearly 98 million people across Japan visit shrines during the celebration, with three million alone attending the Meiji shrine to pray for good luck and buy charms for the new year. 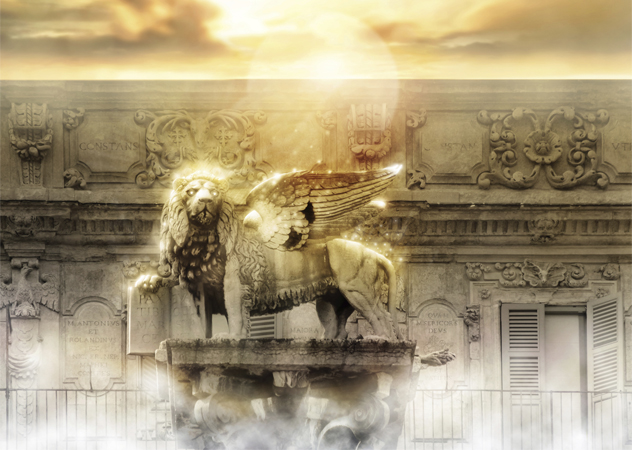 The royal family of Japan used to claim lineage to the sun goddess Amaterasu. During the Meiji Era, Shinto became the state religion as part of the government’s efforts to rid the country of foreign influence. The Emperor used his divine lineage to establish himself not only as the ruler of the country, but also as the head of Shinto.

It was during World War II that Shinto was laced with nationalist propaganda to gain public support. After Japan’s defeat, the Bunce Directive, as issued by General MacArthur, separated Shinto from the state and the Emperor relinquished his divine status. With the nationalist agenda removed from Shinto, the religion was handed back to the people to worship privately as they saw fit.

Erica is currently trying to be a writer. She does freelance work, can be found at wonderfullyabsurd.com, and can be contacted at [email protected].