Whether you call them reindeer or caribou, the undisputed animals of Christmas are fascinating. They can survive temperatures of -60 degrees Celsius (-76 F), walk for thousands of miles, and use the magic of their noses to deliver us all presents. Their herds can consist of hundreds of thousands of animals, crossing continents for thousands of miles. Aside from the impressive numbers, here are 10 cool facts about everyone’s favorite Arctic herbivores.

10 Castrating With A Bite

The Sami people of Scandinavia and Russia have a long tradition of half-castrating their reindeer bulls. Half-castration involves destroying the testicles without breaking the skin of the scrotum. The Sami do this in an unusual way—they pin down the reindeer, then chew the testicles to a pulp. This work is traditionally done by women. The practice has come under some threat in recent years, since European laws designed to prevent animal cruelty have made it illegal to perform castration without a vet present.

Castration may be good for the reindeer overall. Climate change can cause more extreme seasons, including melting and refreezing of water on the ground. This produces a layer of ice that is difficult to penetrate. Half-castrated bulls tend to be the largest of all reindeer in a herd, so they’re best able to break through to the food below. They’re also less aggressive and are happy to share their meal with young reindeer that might otherwise struggle to survive a difficult winter. 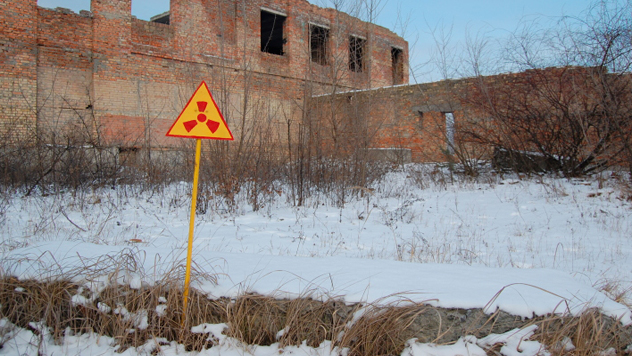 History’s most famous nuclear accident at Chernobyl was bad for reindeer and those that relied on them for a living. The first post-Chernobyl slaughter by the Sami, which happened five months after the meltdown, resulted in 97 percent of meat being deemed too radioactive to eat. The Swedish government created an emergency plan—they fed the meat to minks and foxes used in the fur trade. The pollution wouldn’t pass to the fur, hence the reindeer meat wouldn’t go to waste.

Nuclear fallout continues to be an issue, even today. One of the major causes is the reindeer’s fondness for mushrooms, since mushrooms accumulate radioactive cesium.

There are a few ways around this. Some herders carefully control their flock’s diet, while others spend several weeks feeding a binding agent to remove cesium from the body. Norway simply lets a bit more radiation through—their acceptable level for human consumption is 500 percent that of the European Union’s. 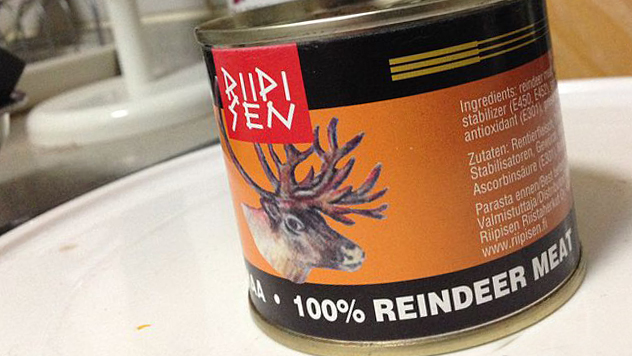 Benjamin Franklin said that in this world nothing is certain, except death and taxes. And also that anytime a well-known company sells reindeer meat around Christmas, every news source in existence will refer to it as “eating Rudolph.” Other meats don’t have the same issue—though campaigners against pork have probably used the term “eating Babe,” searching for that term turns up some entirely unrelated content.

Yet as we’ve alluded to in a couple of other items on this list, reindeer meat is popular. In fact, it’s so popular that Europe is facing a shortage. A single German company ordered 100,000 reindeer from Finland this year, even though only 80,000 were available in the entire country for everyone. Buyers from Spain and France have also been disappointed, with many turning to Russia to get their fix.

Earlier this year, Norway began producing halal reindeer meat as an alternative to ham for Muslims there. The Norwegians weren’t the first—in 2010, Russia sent 1,000 cans of halal reindeer meat to Qatar in an attempt to impress at a trade conference.

If you want a slightly less bloody reindeer dish, then you could try and find some milk. But though many think reindeer milk is an industry waiting to happen, it’s almost impossible to get a hold of any. Heston Blumenthal, one of the world’s greatest chefs, travelled all the way to Siberia in search of it. He said he was “in search of Rudolph,” of course. 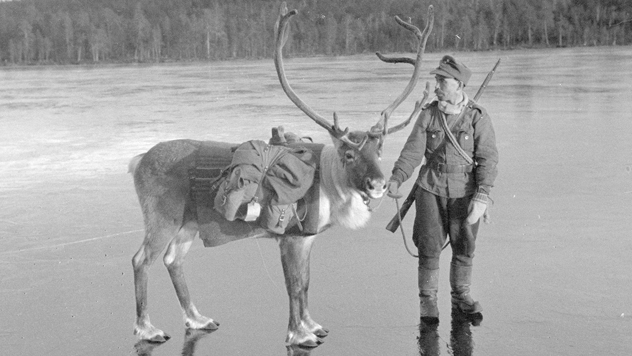 While the deserts of World War II saw the allies turn to camels for assistance, in the Arctic, the Soviets recruited 6,000 reindeer. As well as being able to fuel themselves, the reindeer could pull 50 kilograms (110 lbs) each. They were used to transport supplies, carry injured soldiers, and even drag damaged aircraft through the snow. The Red Army used the help of 1,000 native reindeer herders to keep the force together.

Reindeer took American supplies from Murmansk on Russia’s northern coast to the frontlines. Since only the Americans and the British had fully mechanized their military, the Soviets used animal power in many theatres, and in the frozen bogs of the Russian and Finnish countryside, reindeer were definitely the best option. The Arctic town Naryan-Mar has erected a monument to honor the reindeer that were essential during the Winter War. 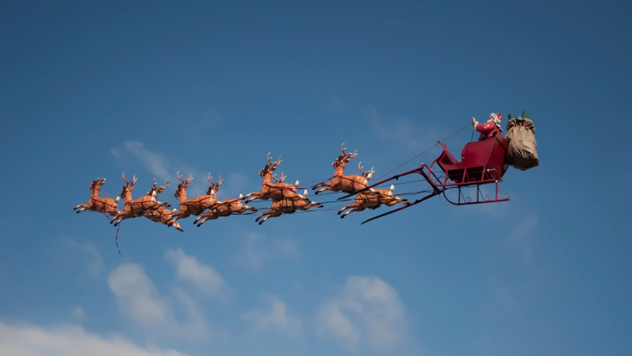 The idea of Santa’s traditional flying reindeer originated in 1822 with The Night Before Christmas by Clement Clarke Moore, but humans have been depicting reindeer in flight for millennia. Hundreds of 4,000-year-old stone monoliths depicting flying reindeer (along with weapons) can be found throughout the plains of Mongolia.

The nomadic tribes that created the stones probably based the carvings on their shamanistic beliefs. Warriors would tattoo themselves with reindeers and birds, representing an ascent to heaven. The pillars may have represented specific individuals, and the weapons carved beside the reindeer may have been detailed accordingly.

Another reason people may associate reindeers with flight is the love reindeers have for hallucinogenic mushrooms. The drugs survive passage through the reindeer and into the urine, so many herders drink deer urine to get high. It wouldn’t be too farfetched for someone under the influence to believe they saw a reindeer actually fly. 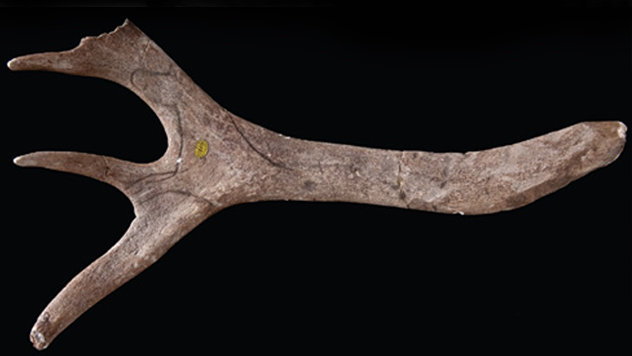 Reindeer have played a role in our culture for a long time. The first piece of prehistoric art from early humans ever discovered (and recognized for what it was) was a carving of a horse made from reindeer antler. The piece was found some time between 1830 and 1848 by a French priest, Jean-Baptiste Croizet.

Britain’s Natural History Museum bought the item in 1848 for 440 pounds, the equivalent of over $40,000 today. They placed it on display for a year and it was then put in storage until 2010, when it was rediscovered as part of an audit. Modern techniques have dated it as being 14,000 years old.

The oldest example of rock art ever found in Britain also involves reindeer. The crude line drawing in cave wall in South Wales depicts a reindeer with a spear coming out of its neck. It dates from around the same time as the horse on the antler. The drawing is similar to those found elsewhere in Europe, but predates them by as many as five millennia. 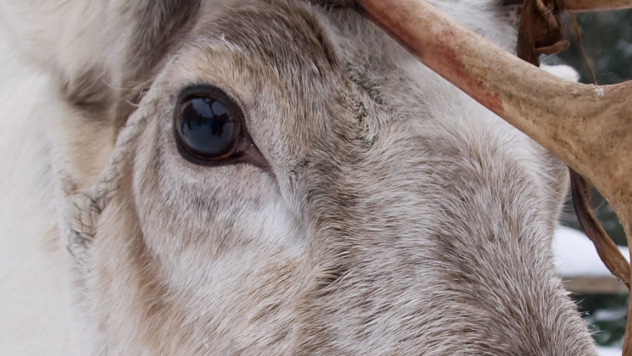 While Rudolph is famous for an oddly colored body part, the most interesting coloration on a reindeer’s face appears a bit higher up on the face. Reindeer are the only mammals whose eyes are known to change color. They do so depending on the season. The eyes are gold during the summer when the reindeer experience almost constant sunlight, but in the darkness of winter their retinas become less reflective and their eyes appear blue.

This isn’t the only way the reindeer have adapted their sight to Arctic living—they are also the only known mammals able to see in ultraviolet. During the winter, when the Sun barely peeks above the horizon, most of the radiation that reaches the area is in the UV end of the spectrum. Snow also reflects around 90 percent of UV, and though that can cause snow blindness in humans, reindeer’s hardier eyes use the fact to their advantage. 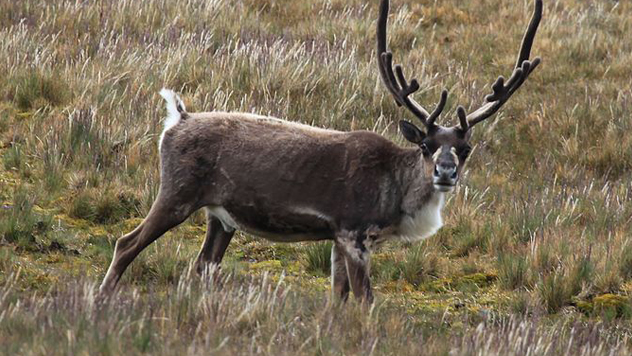 South Georgia is a British island in the Atlantic ocean, off the coast of South America. It’s roughly as far from the equator as Newfoundland, Canada, so it’s perhaps no surprise that South Georgia is about the right climate for reindeer to survive. In fact, you might even say they’ve done a little too well there.

They were introduced as a food source by Norwegian whalers at the start of the last century, and though only 22 were taken there in total, their numbers reached 5,000 by the start of 2013. Native birds such as king penguins have suffered as a result. The reindeer trample nests and eat large amounts of vegetation, causing soil erosion. 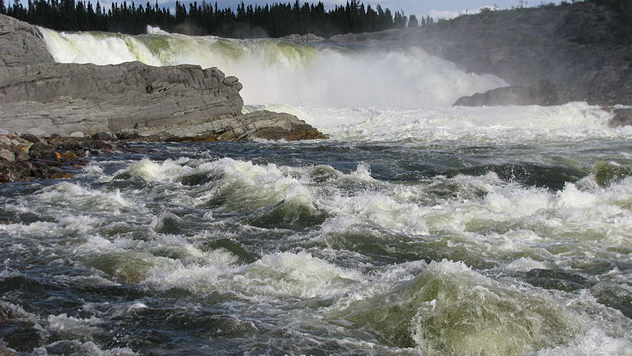 Reindeers migrate thousands of miles every year, and those in North America tend to travel the most of all reindeer species. Covering that distance can lead to firmly entrenched habits. Because the reindeer rely on their experience of the best routes, any artificial change in the environment can cause some pretty severe consequences. That’s why, in 1984, up to 10,000 reindeer drowned in Canada’s Caniapiscau river.

In a typical year, only a few hundred perish in the water, but that year, the power company Hydro-Quebec had just finished a dam. They had started letting out water, and the river was higher than it’d been for many years. The reindeer took their usual route through the river . . . and faced the consequences. The company blamed above average seasonal rainfall, but many weren’t convinced.

Dealing with that number of carcasses is tricky. Eventually helicopters were brought in to move the dead inland, so that scavengers could do the dirty work. The local Inuit population were keen to do the cleanup themselves, if the government would pay them. One surviving deer, surrounded by the corpses of its brethren, was too weak to survive and had to be shot.

Given that reindeer can approach 80 kilometers (50 mi) per hour at full run, it’s probably not surprising that people have taken to racing them. Unlike horses and camels, though, the human competitors don’t sit atop their animal companions. They instead slip on a pair of skis, don a Lycra suit, and cling on to a rope behind the deer.

Twenty breeding cooperatives took part in Finland’s Reindeer Cup Championship in 2011. The racers hit top speeds of 50 kilometers (30 mi) per hour. That’s quite daring, given that they’re wearing almost no padding apart from their helmet. Drag races through towns naturally gather crowds along their route, as the event makes for a very entertaining spectacle. The outfits of the racers are quite flamboyant, with many decorated using bright colors and dramatic patterns.

Alan is genuinely allergic to reindeer and so conducted very little field research for this article. He would like to leave you with a joke. What did the caribou say to his wife when he saw bad weather was on the way? “It looks like rain, dear.”