Animals have many strange ways of behaving and communicating. In this unique account, we examine 10 remarkable inflatable animal species. Just like party balloons, these creatures use air sacs, throat pouches, or their entire bodies to fill themselves with air. Their bizarre displays may feature in mating displays, amplify vocal messages to rivals, or, in the case of one otherwise well-known species, simply keep it afloat while sleeping. 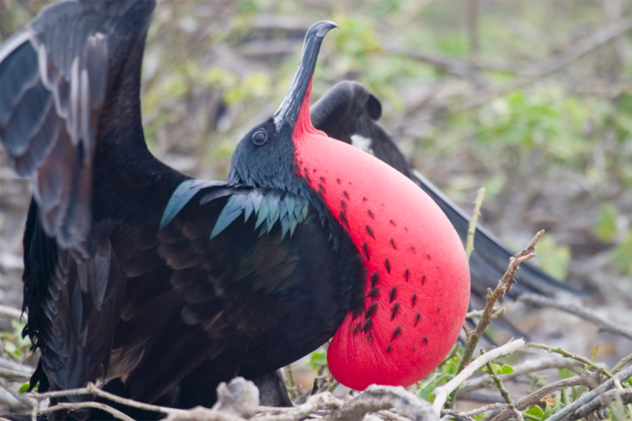 Frigatebirds are large seabirds that belong to the same order as pelicans. With wingspans measuring over two meters (7 ft) across, forked tails, and long, hook-tipped bills, frigatebirds attack smaller seabirds and force them to drop their meals in midair. The birds appear rather drab in flight, but their spectacular, balloon-like throat pouch really lets you see that relationship with pelicans. As “klepto-parasites,” or career thieves, frigatebirds do not have to dive into the water themselves for food. Without waterproofing, they are ill-suited to do so. This lifestyle allowed evolution to turn their fishing pouches towards sexual purposes instead.

Land birds often inflate through the use of air sacs to produce sounds, but the frigatebird uses a different adaptation in a purely visual display. The air sacs of most inflating birds are linked to the lungs. The frigatebird’s method of inflating is more primitive because it has difficulty getting enough air into the throat. Over a period of almost half an hour, a male frigatebird will gradually inflate its gular pouch until it becomes a bright, red balloon almost half the size of the seabird. The effect is reminiscent of a beach ball hanging from its throat. 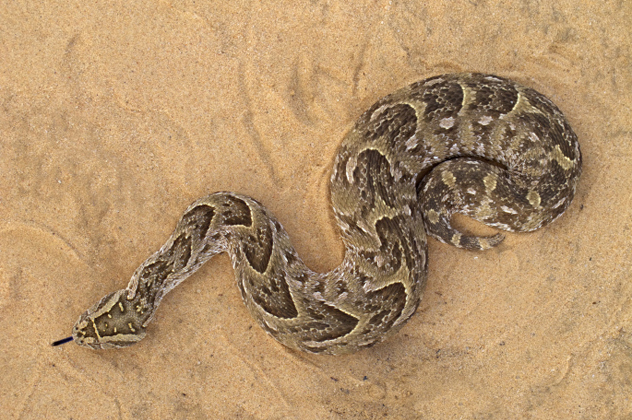 Snakes are known for their aggressive attitudes. However, these misunderstood reptiles are frequently acting in a purely defensive manner. Puff adders of the bitis genus take in massive quantities of air and create a substantial amount of noise. The stretchy snakes will dramatically increase in size to scare off potential predators. As you may have guessed, the name itself, “puff adder,” directly refers to their self-inflation behavior. Many human deaths have resulted from bites when the inflation display fails to provide sufficient warning. The extremely serious effects of the venom include coagulation, nerve damage, and tissue necrosis.

Every year, puff adders are responsible for 32,000 deaths in their native range of Africa and the Arabian Peninsula, but 90 to 95 percent of deaths can be prevented with proper treatment due to the slow-acting nature of the venom. Phony strikes, violent sounds, and body shaking combine with the inflation prior to a physical strike. In a case of convergent adaptation, North America’s hognose snake, often mistakenly called a puff adder, will inflate itself and bluff while expanding its hood. If the inflation act fails, the snake will then stick its tongue out and roll onto its back, playing dead. Bites are very rare, and never serious. 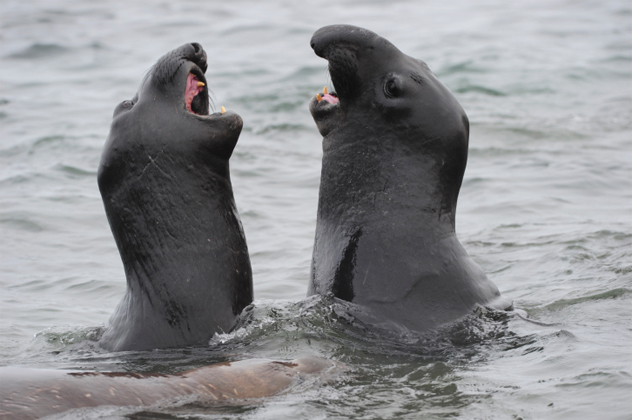 Elephant seals are named after their giant, inflatable noses that resemble a trunk. While most animals simply breathe through their noses, both species of elephant seal fully inflate their noses with large quantities of air during snorting contests, which are their form of mating display. The inflated nose resembles an oblong balloon attached to the seal’s face. The snout extends an incredible 29 centimeters (around a foot) in northern elephant seals.

Milk glands distinguish mammals, but male sage grouse flaunt air sacs that bear a striking resemblance to the mammary glands of primates like humans or gorillas. The two species of sage grouse are the largest of their type in North America, measuring nearly a meter (3.2 ft) in length, and weighing up to three kilograms (7 lbs). Assembling on sage-covered “leks,” the birds inflate their frontal air sacs into two breast-shaped balloons of enormous size and walk around in circles while hooting.

By using air sacs that originally evolved as part of the respiratory system, sage grouse are a classic example of practical features evolving to be used for sexual prowess. Females select males based on appearance and the quality of their hooting and inflating displays. Unfortunately, sage grouse are becoming much rarer due to human encroachment on their breeding habitats, and are considered one of Canada’s most endangered wild birds. An emergency order was recently triggered for the protection of this incredible inflatable bird.

Being primates ourselves, we are intimately familiar with the body form of monkeys and apes. Lesser known is the fact that some primates, including chimpanzees and gorillas, have inflatable throat sacs. Aside from our closest relatives, the most spectacular examples of primate bloating are the howler monkeys, widely considered the loudest animals on land. Howler monkeys inflate themselves with special air sacs in their throats during communication, territory defense, and mating displays.

While the inflated air sacs are mostly responsible for the sheer ear-piercing volume their raucous calls, enlarged hyoid (tongue) bones further enhance and amplify sounds, allowing the notes to carry farther through dense forests. Male red howler monkey hyoid bones are five times larger than those of females. Skeletal modifications have evolved in order to accommodate these self-inflation adaptions. Males have also grown breastbone notches to accommodate the tongue and air sac apparatuses. The largest new-world monkeys are found among the 15 species of howler monkeys.

Bustards resemble small ostriches, but retain the ability to fly. They are native to the open landscapes of Africa, Asia, and Europe, including parts of the United Kingdom. The kori bustards of Africa and Eurasia are considered the heaviest flying animal species. Kori bustards may measure 1.5 meters (4’11”) in length and stand 1.2 meters (3’11”) tall, with wingspans of nearly three meters (9 ft). Males of these two largest species can weigh over 18 kilograms (40 lbs). The slightly smaller great bustard is Europe’s largest living bird species.

Getting air under the wings is not enough for these Hindenburgs of the bird world. During mating displays, bustards suck air into hidden throat pouches until their thin necks reach the size and shape of an American football. The sudden expansion changes their coloration by exposing white interior feathers. The birds perform dramatic dances like their close relatives, the cranes. Legends abound describing the unearthly size of these birds, and males are always much larger than the females. Unfortunately, bustards are threatened by habitat loss and excessive hunting. 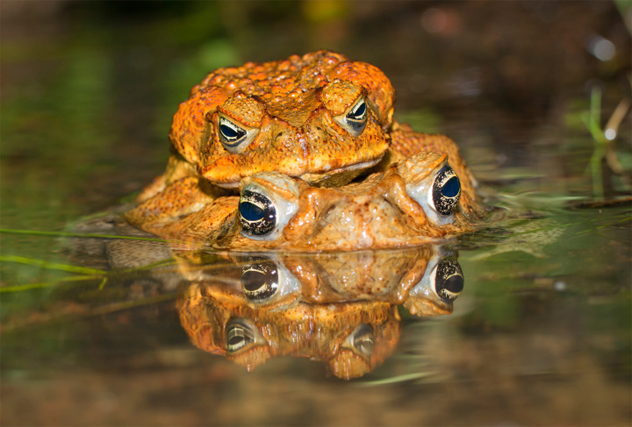 Many frogs and toads are inflatable, most of which use the adaptation to ward off predators. While many of the inflatable animals on this list are males who puff up to lure a sexy mate, female cane toads inflate for the opposite reason—they’re playing hard to get. While both sexes inflate to ward of predators, females utilize full-body inflation to prevent a male from grasping them successfully. Such inflation seems to be a screening method to determine mate suitability—a male that can handle mating with the suddenly large female is an especially desirable and “fit” mate.

It’s partly due to this rigorous screening process that cane toads are such a devastatingly effective invasive species. Offspring are given the highest likelihood of survival because of their strong genes, which only come from worthy mates. On top of that, their ability to fit almost anything in their mouths makes them voracious predators capable of overrunning ecosystems in the blink of an eye. 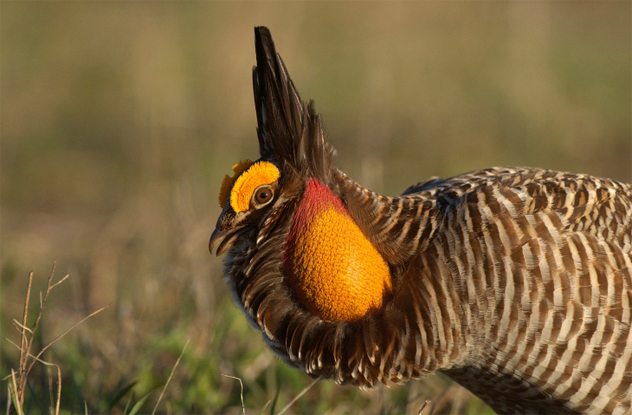 While sage grouse have the greatest inflation capacity among chicken-like birds, a smaller ground bird performs even odder displays. The two species of prairie chickens use inflation and weird “horn feather” displays in breeding rituals to attract the opposite sex and ward off rivals. Native to open grasslands and prairies, these medium-sized grouse hold up hornlike feathers over their foreheads while bright orange air sacs puff out from the sides of their necks.

Air sacs are inflated in part due their ability to greatly increase sound quality and volume, although the visual aspect of bird inflation displays seems prominent. The greater and lesser prairie chickens are among the most bizarre and, unfortunately, endangered of North America’s game birds, partially due to habitat loss and rising predation. Prairie chickens boast striking barred patterns and feed on plants and insects.


2 The Difference Between Pufferfish And Porcupinefish 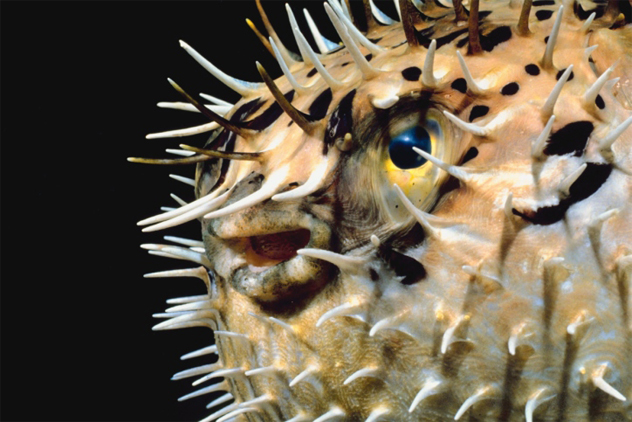 Pufferfish and porcupinefish are two very spectacular and often poisonous examples of animal self-inflation. While both animals have been featured on Listverse before, we’ve never really covered the differences between these two commonly confused seafarers. The order tetradoniformes is a massive grouping of some very weird fish. Families include the ocean sunfish (or mola mola), triggerfish, pufferfish, and porcupinefish. Pufferfish have relatively smooth skin, and often contain powerful neurotoxins capable of killing most animals. They’re one of the deadliest animals in the sea.

Porcupinefish, also known as blowfish, resemble pufferfish at first glance. They fall under the entirely separate family diodontidae, but are contained within the tedradoniformes order. They are sometimes larger, with some species reaching nearly a meter (3.2 ft) in length. They are almost exclusively salt water fish, and uniquely possess massive spines that stick out when inflated. The spines offer an alternative (and sometimes a supplement) to nerve-damaging toxicity. Porcupinefish also have massive, beak-like jaws that can shred shellfish with ease.

1 The Walrus Is A Living Buoy 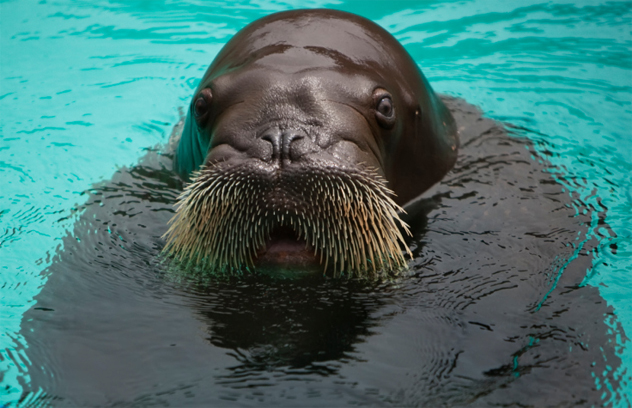 The well-known walrus is probably the oddest of the pinnipeds. Males may reach 3.5 meters (12 ft) in length, with a weight of 1,360 kilograms (3,000 lbs). Lesser known is the fact that the walrus is also highly inflatable. In addition to their tusks, walruses stand out among pinnipeds because of the two air sacs in their necks. The pair of large pouches extend from the walrus’s neck and rapidly inflate to a substantial capacity.

In contrast with the showboating elephant seals, walruses usually inflate for a different purpose—to help them sleep. These air-filled pockets provide effective buoyancy, holding the air-breathing animal’s head above the water as it sleeps. The sacs are also used by the males as resonance chambers to make booming sounds during disputes in the mating season, and to attract female walruses.

Ron Harlan investigates of the mysteries of nature and the bizarre findings that often crop up on this planet. Ron is a freelance writer, avid naturalist and graduate student of science in British Columbia, Canada. If you are interested in receiving copies of his wild bird articles or health blog, contact him at [email protected].