Humans have a lot of talents. Some of us can juggle, others can play the guitar, while others can juggle guitars (probably). Yet most of what we can do relies on our brains and hands. That means that there are a whole bunch of things we’ll never be able to do, like tie ourselves in a knot, liquefy our bodies to squeeze through small spaces, or swallow a guitar (short of some horrifying juggling accident). Those kinds of talents are left to other animals, like the underwater critters here. 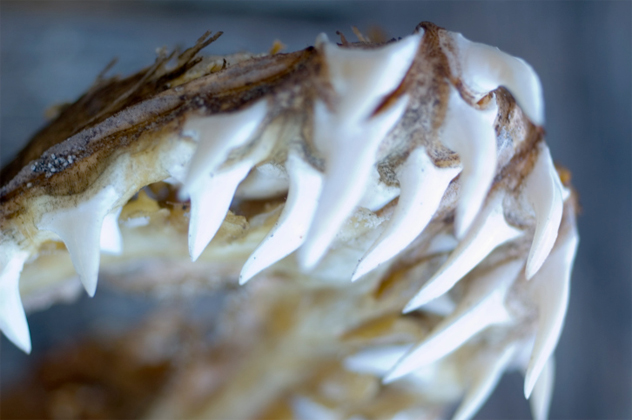 The horrifying black swallower has a talent that’s given away by the huge sack of a stomach that dangles beneath its body. Chiasmodon niger has many of the features that make other deep sea fish frightening, like its bulging black eyes and abominable teeth. Yet it’s the fish’s ability to swallow its prey whole that makes it stand out. When the black swallower finds something it wants to munch on, it darts out, grabs hold, and inches its jaws over the victim until the entire prey is consumed.

It’s not fussy about what it eats, and it can swallow animals twice its length and over 10 times its mass. Its stomach becomes so stretched that it ends up translucent, so you can see the swallower’s latest meal being digested. And digestion takes so long that the swallower can’t process some of its bigger targets before they start to decompose. This ends up filling the stomach with gas, and turns the fish into a balloon. It’s these inflated black swallowers that end up floating to the surface, and they are the ones we find most often. 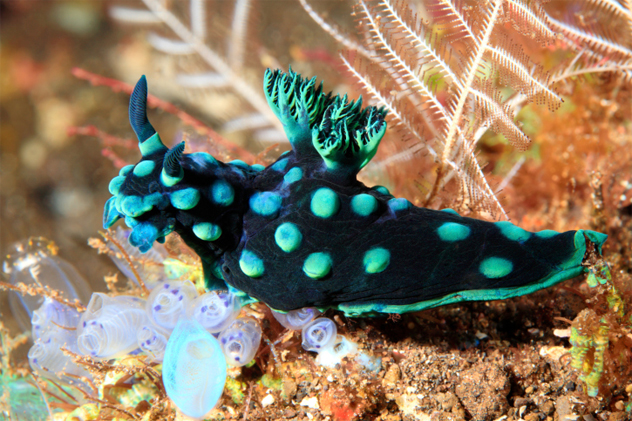 The sea slug Elysia chlorotica has an ability that’s never been found in any other animal—it’s able to photosynthesize its own food using sunlight. The ancestors of the slug lived on a diet of algae. The slug is able to steal the chloroplasts—organelles that perform photosynthesis—from the algae and incorporate them into its own cells. This gives the slug a distinctive green color, and they have been nicknamed “leaves that crawl.”

Even more surprisingly, the slug has stolen genes from the algae and is able to produce its own chloroplasts. Researchers found the genes even in juveniles that have never eaten. Yet in an added wrinkle, other scientists have found that the slugs are able to go for long periods of time in the dark without eating, and still survive quite happily. It suggests that the photosynthesis may not be the only key to their survival strategy. However much importance it has for the slug, it’s a unique talent that no other animal can boast. 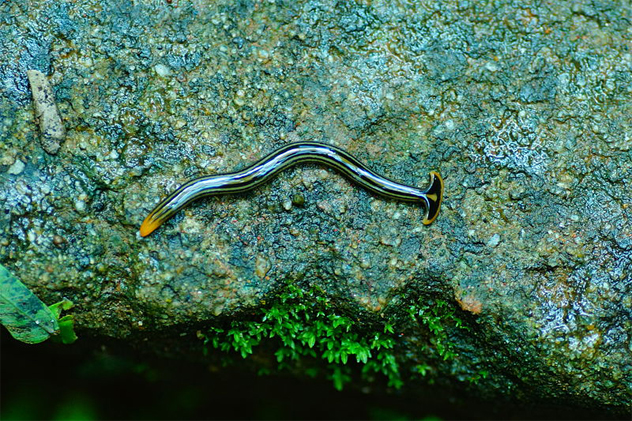 Planarians are a type of freshwater flatworm, which is an animal notable for its ability to regenerate. In fact, their regenerative abilities have given them two list-worthy talents. If you decapitate a flatworm, it will grow a new head. That’s impressive by itself, but researchers have found that the new head gets the memories that developed before the old one was removed.

Scientists trained some planarians to tolerate light, which the worms normally avoid, then chopped off their heads. Two weeks later the worms had regenerated their missing noggins, but retained the learned tolerance to brightness. The researchers aren’t certain how this happened. It may have been a change to the animal’s DNA, or an unknown mechanism.

Another team of researchers have found that a single cell has the ability to regrow an entire body. They bombarded a flatworm with radiation until its tissues were destroyed and its cells were no longer able to divide properly. They then injected a single cell from another adult, which was able to regrow every single part of the animal. This shows that adult stem cells in flatworms are able to turn into literally any body part, unlike adult human stem cells, which tend to be more limited.

7 Hagfish Tie Themselves In Knots

We’ve mentioned hagfish here before, but being around for 300 million years gives you plenty of time to develop more than one interesting trait. There’s one talent possessed by these gooey not-really-fishes that we’ve never covered—hagfish are able to tie themselves in knots, an ability that comes in useful both in defense and when catching prey.

When hagfish hunt, they do so by searching for fish burrows. When they find a fish hiding in a hole, they lunge face-first into the hole to pull it out. But sticking your head into a tunnel while your rear end flails around isn’t the easiest way to pull out a fish that doesn’t want to be eaten. To make it easier, the hagfish tie their rear end into a knot which is bigger than the hole. This gives them a perch around the top so they can pull themselves—and their lunch—back out.

Hagfish have also turned this ability into an escape trick. If they’re being held at one end, they’ll tie the free end into a knot. They can then push the knot up their body, and when it reaches whatever’s gripping the hagfish, the knot pushes against the predator and pulls the hagfish free. 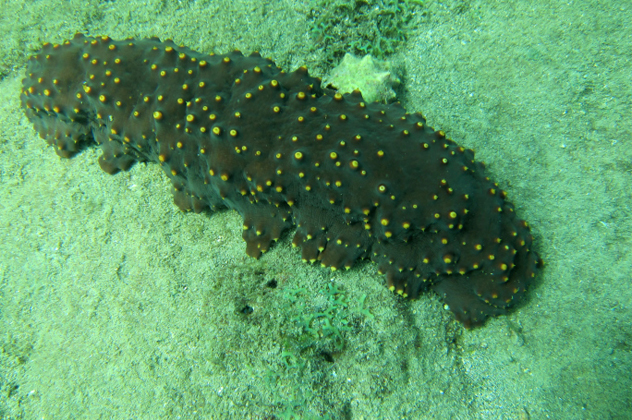 Sea cucumbers have a famous defense mechanism that we’ve told you about before. They eject their guts at predators, and regrow them later. Yet they have a second, equally unusual defense mechanism—they can liquefy themselves. Essentially, they unhook the bonds keeping their cells together and let themselves flow into (or out of) awkward spaces.

When it’s where it wants to get to, the sea cucumber can solidify itself again and become difficult to extract from a hiding place. This talent is so extreme that it’s even possible for a cucumber to liquefy itself to death. It would turn purely into goo, and would simply flow through your fingers if you were holding it (at which point you would tell aquarium staff, “I swear I didn’t do anything!”). 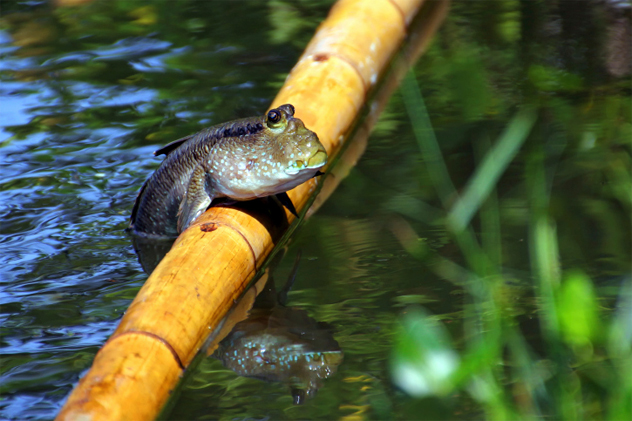 There’s a famous quote attributed to Einstein: “Everybody is a genius. But if you judge a fish by its ability to climb a tree, it will live its whole life believing that it is stupid.” If you search Google for “Einstein fish tree,” you’ll find thousands of motivational posters with Einstein’s face and the quote included, even though he never said it.

Should you come across any of your friends sharing one of those pictures, feel free to show them this video of a fish climbing a tree. That genius of the fish world is the mudskipper, a fish that spends much of its life out of the water. It lives in areas filled with mangrove trees, and is quite happy to pull itself up a log or branch. It uses its pelvic fins as a sort of suction cup to keep it attached, and pulls itself up with its pectoral fins.

Mudskippers have developed small sacks around their gills that let them hold a breath of water, much the same way we would hold a breath of air. They climb trees so they can stay out of the water during high tide.

Despite what Hollywood may have taught you, talented archers aren’t all rebellious young women or Jeremy Renner. The archerfish is small tropical fish that feasts mainly on insects. It gets its name from the astonishing way it catches its prey. The fish, which are typically no more than 10 centimeters (4 in) long, can shoot a jet of water up to 2 meters (6 ft) at insects hanging on vegetation near the water.

They’re able to accurately hit their small targets, in the dark, with enough force to successfully knock them into the water. They produce the jets by pressing their tongue against a groove in the roof of their mouth, much like the barrel of a gun. The speed of the water leaving their mouth increases throughout the spit. That allows all of the water to arrive at the same time, and hit the prey with six times the force the fish could produce with just the force of its muscles. 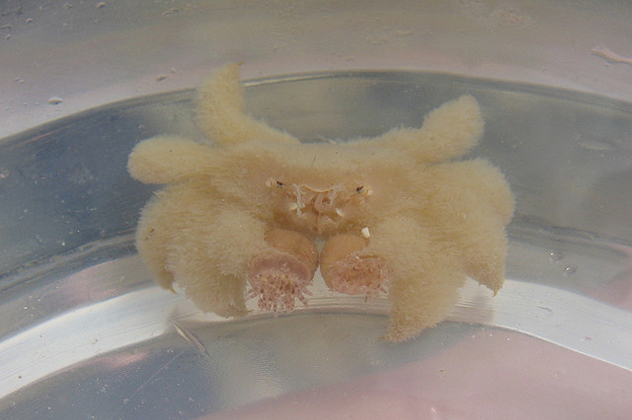 The teddy bear crab is a small crustacean covered in bushy, white bristles. While a furry crab is curious enough, the species Polydectus cupulifer also has an unusual behavior. It picks up stinging anemones, one in each claw, and wields them as weapons. The crab doesn’t just stand there looking like a miniature yeti with red pain-pompoms, though. It can tell which anemones are useful, and turns the anemone around so it can grip it from the right angle. Then, the crab is able to strike with just the right part of its weapon.

The anemone isn’t just something to attack predators with, either—it’s also a food source. The crab will happily collect food from its “companions,” even going so far as to reach inside the anemone’s digestive system to pull out anything the anemone has already eaten. 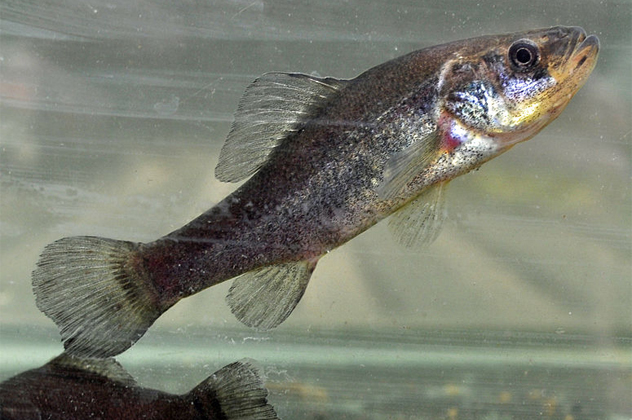 The pirate perch is an unusual fish. When it’s young its anus is located in the normal place you’d expect to find an anus, but as it matures, its anus moves to just underneath its chin. Yet it’s not the migrating anus that warranted it a place on this list. And as if we haven’t said the word anus enough in this paragraph already, we’d like to point out that the species name is A. sayanus.

Scientists investigating the response of beetles and frogs to predatory fish have found that the pirate perch has another unique feature. When they gave beetles and frogs a choice of ponds in which to live and reproduce, the animals avoided those that contained fish who were likely to choose them for dinner, with one exception. The potential prey were perfectly happy to set up home in ponds containing pirate perch.

The researchers aren’t sure whether the pirate perch is cloaking its chemical signature or disguising itself as something else, or if there’s some other factor at play. Whatever is going on, the pirate perch is able to hide its presence in a way that other fish simply can’t, making it uniquely talented.

1 The Tigerfish Plucks Birds From The Air

The tiger is a deadly predator with very sharp teeth that you’d very much like to keep away from your face. In that way, the tigerfish is suitably named. This African fish is often compared to the piranha, as it’s aggressive and uses its razor-filled jaws to tear its prey into pieces. Unlike the piranha, there is a giant variety of tigerfish—the goliath tigerfish—which can grow to weigh 50 kg (110 lb) and eat crocodiles.

Yet it’s the hunting ability of the smaller variety that’s got it a spot on this list. Recently, researchers have recorded its ability to catch birds. While many fish are known to eat birds floating on the surface, a tigerfish in a South African lake was caught on film leaping out of the water and catching a swallow while the bird was flying through the air.

While nobody has yet observed the goliath tigerfish displaying this behavior, we’re probably going to avoid helicopter rides over African lakes for awhile, just in case.

Alan is particularly impressed by tuna and salmon, which have developed the talent of being extremely delicious. You can catch him on Twitter.