Hate it or love it, the world is full of worms. Physically vulnerable, the squishy creatures find safety in weirdness. Some form gruesome alliances, while others grow new brains.

Worms can eat without mouths, control other species, and enjoy environments that would kill most other living things. The slithering wonders also have scientists’ undivided attention. Not only can they fertilize other planets, but one kind could also be the solution to the world’s plastic crisis. 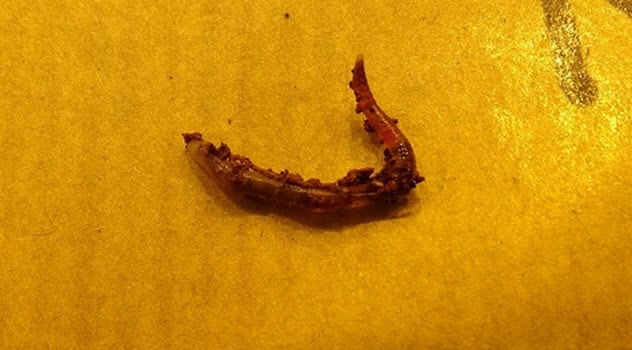 There are no earthworms currently exploring the Red Planet. But in 2017, research showed that they could successfully thrive in Martian soil. A few Dutch earthworms were gathered and placed in a special mix. Years ago, NASA invented fake Mars sand. This substance is so close to the real thing that it helps the agency research rovers, space suits, and mining equipment.

To see if earthworms could survive—and help make the planet more fertile—scientists combined the simulated soil with manure fertilizer and rucola plants. The main worry was that the grains might be too sharp for earthworms. Since Mars has less weathering than Earth, the sand tends not to be so fine.

For example, Earth silver sand consists of quartz and is used in gardening. The pig manure was expected to help with this issue. But surprisingly, together with the worms, it made the fake soil a better growing medium than silver sand. The best moment was when scientists discovered that the earthworms had unexpectedly started a family.[1] 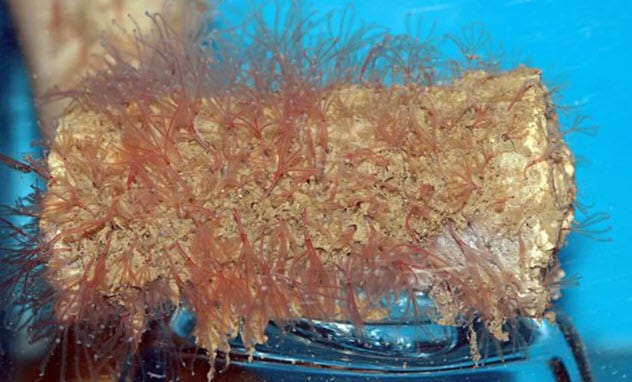 In 2002, odd worms were discovered near the California coast. Called “zombie worms,” they love eating the bones of large marine animals. They perforate a skeleton until it resembles Swiss cheese.

Bone-crunching worms may sound normal, but this species lacks mouthparts that can gnaw. The creatures also have no digestive system. If zombie worms cannot scrape bones or digest them, how do the holes form?

In 2013, the answer proved that the critters were indeed responsible. Instead of using teeth, they dissolved skeletal remains with acid. The skin produces the noxious substance, which seeps from proton pumps resembling those found in human kidneys.

Even the cellular process making the acid is nearly identical to the cellular mechanism that produces osteoclasts in humans. (Osteoclasts break down bone matter.) How the worms digest the dissolved food remains unknown.[2] 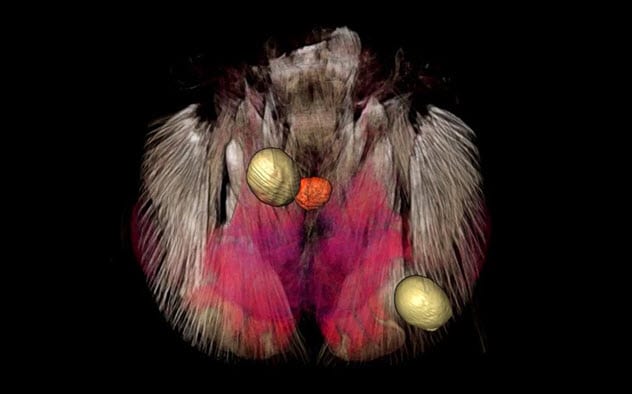 Sometimes, ants encounter a tasty ball of goo. Within the snack lurks the larvae of the lancet liver fluke. Once consumed, the larvae turn into a worm that hijacks the ant’s brain.

It “drives” the insect up a blade of grass until a browsing animal swallows the ant. After a cow consumes it, the worm lays eggs. The cow expels the eggs, which are eaten by snails. The larvae hatch inside the snail before getting pooped out as yummy orbs for ants.

Despite understanding the flatworm’s life cycle, science could not explain how it controlled the ant’s behavior.

In 2018, researchers lopped off the heads of infected insects. Using a miniature version of a CT scan, they took the first-ever snaps of the takeover. The images showed that several flatworms often competed for the same brain.

The winning fluke used mouth suckers to latch onto the neural areas that control walking and the ant’s jaws. This could explain why a zombie ant strolls up a blade of grass and locks its jaws near the top, effectively holding it in place for a browsing cow.[3] 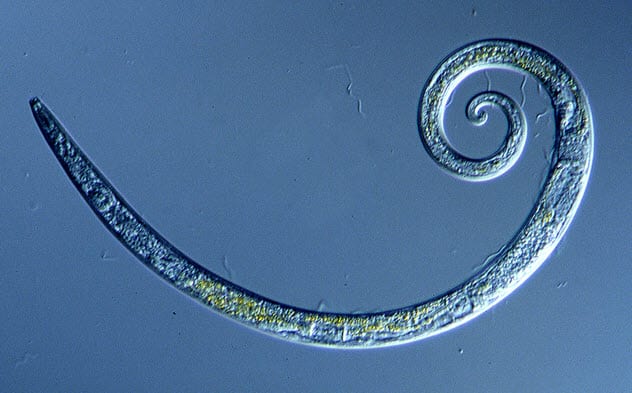 Nematodes are microscopic worms. Normally, they wiggle around in the soil and nobody takes much notice of them.

In 2018, they blew the world’s mind. All right, maybe not everybody’s, but nematodes from Siberia proved that cryogenic fans might not be crazy. Cryogenics involves freezing things, including people, for later revival—possibly hundreds of years into the future.

In 2018, the nematodes were found in permafrost dating back to the Pleistocene. The creatures had been frozen solid for 42,000 years. When researchers defrosted the worms, two species started to move. Not only was there physical movement, but the worms also consumed their first meal in millennia.[4]

This marked the first “ice rebirth” of a multicellular organism in history. Since it happened naturally, scientists are still trying to understand how the nematodes survived 42,000 years as Popsicles. 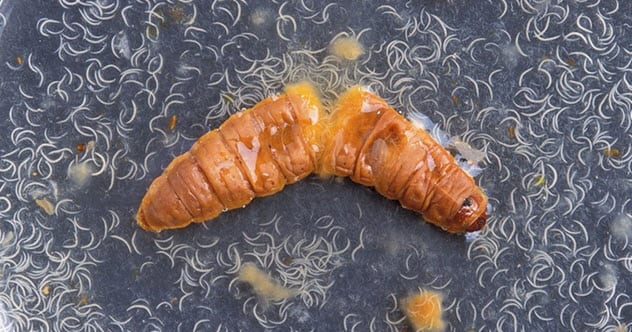 When Heterorhabditis nematodes and bacteria called Photorhabdus luminescens gang up, no insect is safe. Should a grasshopper crawl by, the nematode propels itself from the soil and burrows into the host’s body.

Once inside the victim, the worm vomits the bacteria from its own gut. The poisonous bacteria quickly kill the insect. Additionally, they release a chemical that prevents the corpse from decomposing. This provides the worms with weeks of fresh meat and a cozy nursery for baby nematodes.

To prevent larger predators like birds from eating the dead insect, the bacteria have a few tricks. Using one of the best-known warning colors in nature, they turn the carcass red. It also reeks of almonds, which is another “stay away” signal that birds recognize. Strangest of all, they cause the body to glow an electric blue.[5]

In turn, the nematodes act like transport for the bacteria. Right before the worms abandon the insect, the baby nematodes eat some of the bacteria—later to be regurgitated inside a new host.

These nematodes may be cannibals, but they look out for their family

To the human eye, nematodes all look the same. The microscopic worms are uniformly smaller than sesame seeds and have no individual distinguishing features. Despite this, nematodes recognize their own young.

This first became apparent when researchers studied the creatures’ eating habits. Gruesomely, some nematodes eat each other. As ferocious as these cannibals were, they refused to gobble up their own offspring. When presented with unrelated nematodes, they consumed them.[6]

This mysterious recognition defied explanation until 2019. To find out what was going on, scientists turned to a worm called Pristionchus pacificus. It had a nasty habit of preying on other species of nematodes as well as its own.

Analysis of its DNA revealed a gene called SELF-1. For some reason, this gene was definitely the reason why young nematodes were safe around killer parents. How did the team know this? When they removed SELF-1, the worms ate their kids as if there was no tomorrow. 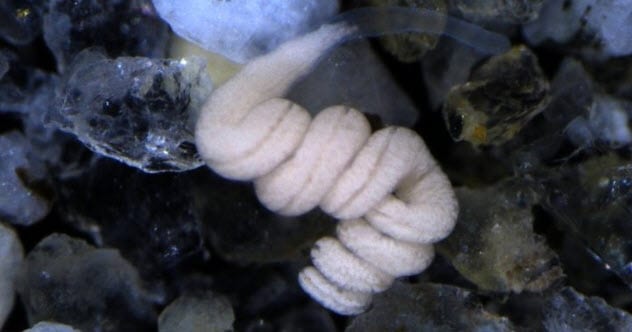 For a long time, scientists wondered how Paracatenula survived. Despite having no mouth, gut, or butt, the flatworm thrives in seabeds wherever there are mild temperatures. Most species need those traits to eat, process food, and expel waste.

Recently, the answer proved to be a remarkable symbiosis with bacteria called Riegeria. Together, they formed a chemosynthesis cycle, where energy is drawn from a chemical process instead of sunlight.

The bacteria produce enough nutrients to sustain the worm. Paracatenula does not need a mouth to harvest this “food” because the bacteria already live inside the worm. The organisms also use the worm’s waste, eliminating the need for a butt.

Two things made the friendship special to science. Normally, all worms with chemosynthetic bugs must eat the actual bacteria to gain benefits. This makes the benevolent bond between Paracatenula and Riegeria something unique. Additionally, they have been at it for 500 million years.[7]

3 They Thrive In Poison

In 2008, scientists explored Sulphur Cave in Colorado. Since the cave contained enough hydrogen sulfide to kill a human, they wore breathing equipment and a medical team waited outside. Besides the deadly gas, the cave also dripped sulfuric acid capable of burning through clothing.

Surprisingly, a new species of worm lived in the deadly habitat. Finding Limnodrilus sulphurensis inside Sulphur Cave classified the creatures as extremeophiles. This meant that they thrive in a place where most other animals, bugs, and people would perish.

The tiny worms’ bloodred color was also intriguing. Their hemoglobin binds to oxygen much more than other species. This compensates for the cave’s low oxygen levels and could be causing the scarlet look.

Other bright red worms live near hydrogen sulfide vents under the sea. The marine worms use bacteria to process the toxin, but the Sulphur Cave worms appear to do that all by themselves.[8] From 2012 to 2014, ribbon worms found themselves stuffed into researchers’ containers. The 22 species were picked up in Argentina, the United States, New Zealand, and Spain. Once bagged, they went to the laboratory to get tested for regeneration abilities.

Incredibly, after several had their heads chopped off, eight species grew new noggins. This included spanking fresh brains. One individual showed off and regenerated itself despite missing the entire front half of its body.

In 2019, a deeper analysis shattered a scientific belief. It was thought that regeneration in related species started with a common ancestor. This was not the ribbon worm way.

Tests determined that their common ancestor was a deadbeat as far as regrowing heads was concerned. From an evolution standpoint, each of the eight species performed a spectacular feat—they evolved the ability on their own and independently of each other.[9] 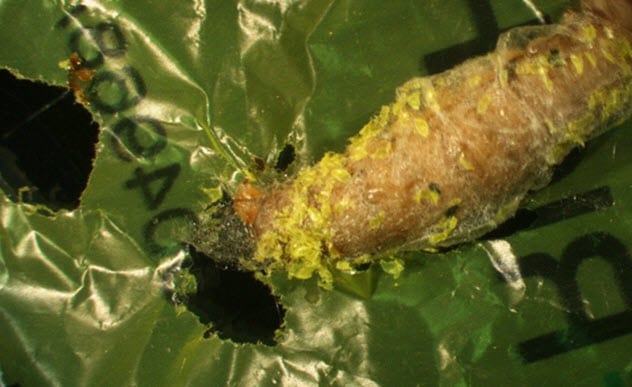 In 2017, a scientist and beekeeper noticed parasites in her hives. She removed the waxworms and temporarily placed them in a shopping bag. After completing several beekeeping duties, she noticed that the plastic bag was full of holes. The worms were either just chewing through the plastic or actually eating it.

If they had consumed the bag, the parasites could become the hero in the worst pollution problem in decades. An unusual test proved that the worms could dissolve plastic.

Researchers squashed a few and smeared their goopy remains over shopping bags. The latter shriveled and disappeared. This was a super exciting moment because plastic is notoriously hard to break down.

During a second experiment, 100 waxworms gulped 92 mg of polyethylene within 12 hours—1,400 times faster than any bacteria used in previous trials. It is believed that the worms have an enzyme capable of breaking down beeswax for easier consumption. The same enzyme could be dissolving the plastic. If scientists can reproduce the compound, it could be used to destroy plastic en masse.[10]

Read more weird facts about worms and other subterranean creatures on 10 Worms Used By Humans and 10 Otherworldly Subterranean Creatures.